It takes a village: How Sacred Games actor Rajshri Deshpande is uniting a village near Aurangabad to build an eco-school

Rajshri Deshpande, best known for her role in Sacred Games, is rebuilding Zilla Parishad School in Pandhari, which is about 30 km from Aurangabad, to help the whole community

School is not just a place where students come to learn, it's where they spend most of their childhood. It's not just four walls and a roof, it's what encloses them in a place where they learn to give wings to their dreams. Unfortunately, infrastructure-wise, most schools don't evoke this feeling. So when Rajshri Deshpande looked at the Zilla Parishad School in Pimpalgaon Pandhari, Aurangabad, she knew she had to turn it into a true temple of learning. And not just any, but one that respects the earth it stands on by being as eco-friendly as it can be. It was all going well, via her initiative Nabhangan Foundation she was able to raise funds, and the school was nearly redone when Corona hit and all the work came to a screeching halt. Thus, she took to the fundraising platform Ketto to raise Rs 7,03,500 required to complete the school.

Yes, you have seen her
Now, we know there are several questions that are coming to your mind. First, if the name Rajshri Deshpande rings a distant bell then let us confirm you that yes, she is the actor who played the wife of Ganesh Gaitonde (Nawazuddin Siddiqui) from Netflix's Sacred Games and her portrayal of the maid in the indie film Angry Young Goddesses also left a distinct mark. But make no mistake, this foundation is not something she runs on the side. Every villager in Rajshri Deshpande knows her and she has earned the affectionate terms Taai (elder sister) and aamchi mulgi (our girl). "It was five years back that I first visited the village while on a solo drive. I have always felt strongly about the cause of farmers and the issues they face during drought. The 'water tanker de do’ (just send them a water tanker) solution is just wrong. So the villagers and I revived the Bembla river, then we helped build over 200 toilets and now, the school is my passion project," says the Aurangabad-born actor. "I was born in a drought-affected village and I know their struggles. My father was a farmer himself. I've seen what can happen to lands and for this village and its villagers, I personally feel responsible," she shares emotionally.

In the process | (Pic: Nabhangan Foundation)

When the authorities said they had no budget to reconstruct the Zilla Parishad School, Rajshri sought the required permissions herself and started work last year. In this 12,000 square feet area, they started building a 3,700 square feet school. The new school has six classrooms for class I to VII, kitchen, staff room, toilets, a library and a small amphitheater space, "I really want to help build a culture where students gather, watch movies, discuss and conversations are sparked," she says. But what is the best part about the school is it is being built in an eco-friendly manner, from saving as much water as they can during construction, to using clay, having a curved roof to keep the school automatically cooler and so much more! They also have rain water harvesting and waste water management facilities, courtesy architects and friends of her from amchi Mumbai!

Grow what you eat
"Permaculture will be everywhere and it will be the kids who will grow the plants and the vegetables from their midday meals will come from it," shares the actor and activist. The playground is being built from recyclable material and bamboo is being used extensively. Also, there were 22 trees in and around the school and none of them have been cut to make way for the school, everything has been built around them. Now the work that is left is fitting all doors and windows, electrical work, flooring, play area, furniture, vegetable garden, compound wall, pavement and so on. "It's not about the beautification, it's about having arts and crafts spaces, a playground and the basics," she highlights. 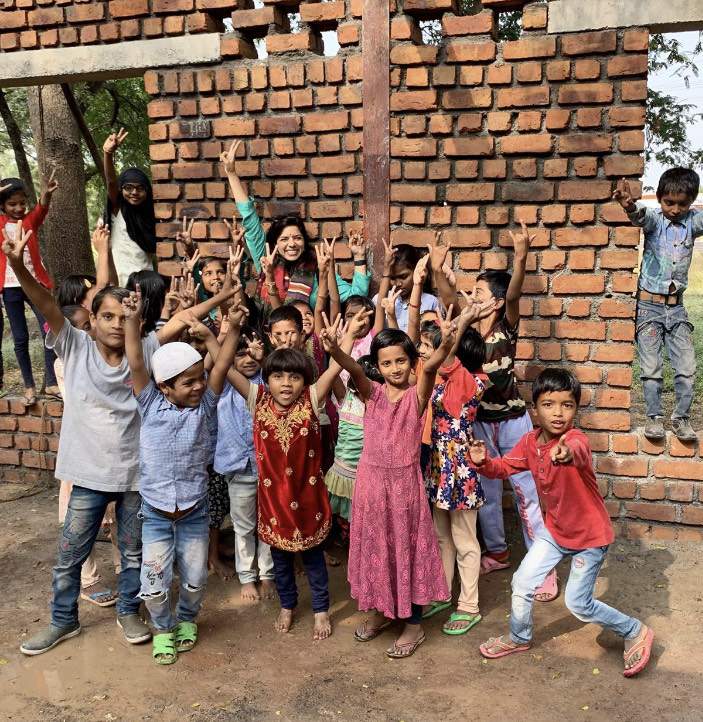 Using the help of all those who have come back to the village after the lockdown, the work on the school is taking off again. The older boys who know Math and English are even teaching. "The villagers have so far planted 350 trees and are getting money for it," Rajshri informs. Now that the folks are back home from the big cities, they need jobs in rural areas and this is the activist's way of offering it.

To know more, check out nabhanganfoundation.org