The organisers of the procession responded aggressively to those objecting to the communal song and the loud music being played at night. Police and guards intervened to take control of the situation

Students at the English and Foreign Languages University, Hyderabad (EFLU) took to the streets on Tuesday night in objection to the loud music that was being played at a Ganesh Chaturthi immersion procession even after several failed attempts to persuade the organisers, who were alleged to be members of the Akhil Bharatiya Vidyarthi Parishad (ABVP), to turn it down. More students came out when the communal song 'Mandir Wahin Banayenge', was played repeatedly during the procession.

The procession, which began around 8.30 pm in the night and went on for almost two hours, was taken out on campus, along with loud music being blasted along the entire path from the residential quarters to Gate no 2 of the institute, several students from EFLU told Edex. "We asked about the procession from the Proctor at the institute and he told us there was no permission for a DJ but these people had already sought permission for the said event. When they took out the procession, they were moving very slowly, loud music was being played throughout. There is a women's hostel on the way, these people stopped there for more than an hour, around 9.30-9.45 until after 10 pm. Students went and complained to the Students' Council about the music when the song Mandir Wahi Banayenge was deliberately played twice near the hostel. Requests to turn down the volume and to stop playing music after 10 pm (the stipulated time limit for loud music to be played in cities) were ignored and the participants reacted aggressively and with disdain to the attempts being made to persuade them. The Proctor was also present alongside the procession but he did not respond or seem to pay heed to the students. When a female resident from the hostel went to him asking to turn down the volume, she was asked by him as to why she could not enjoy the celebrations like the rest of the nation. He even allegedly asked her to leave India if she had objections," alleged a student from EFLU who was present during the event. The student requested anonymity for the same.

At least 125 students came out and gathered in front of Gate no 2 when the song Mandir Wahin Banayenge was played repeatedly. This song was played in blatant disrespect of the sentiments of every community on this campus, with a complete disregard to the secular atmosphere of the campus and with the clear intent to trigger conflict, the students at the varsity alleged. "When the Students' Council at the varsity tried to contact the Proctor he did not respond, meanwhile few people who apparently said they were from ABVP tried to enter the campus from the same gate. Guards managed to block their entry while the procession came near the gate around 11.45 pm on Tuesday night. There's a library and a reading room on the way too, people studying there came down and joined the gathering," said an EFLU student. 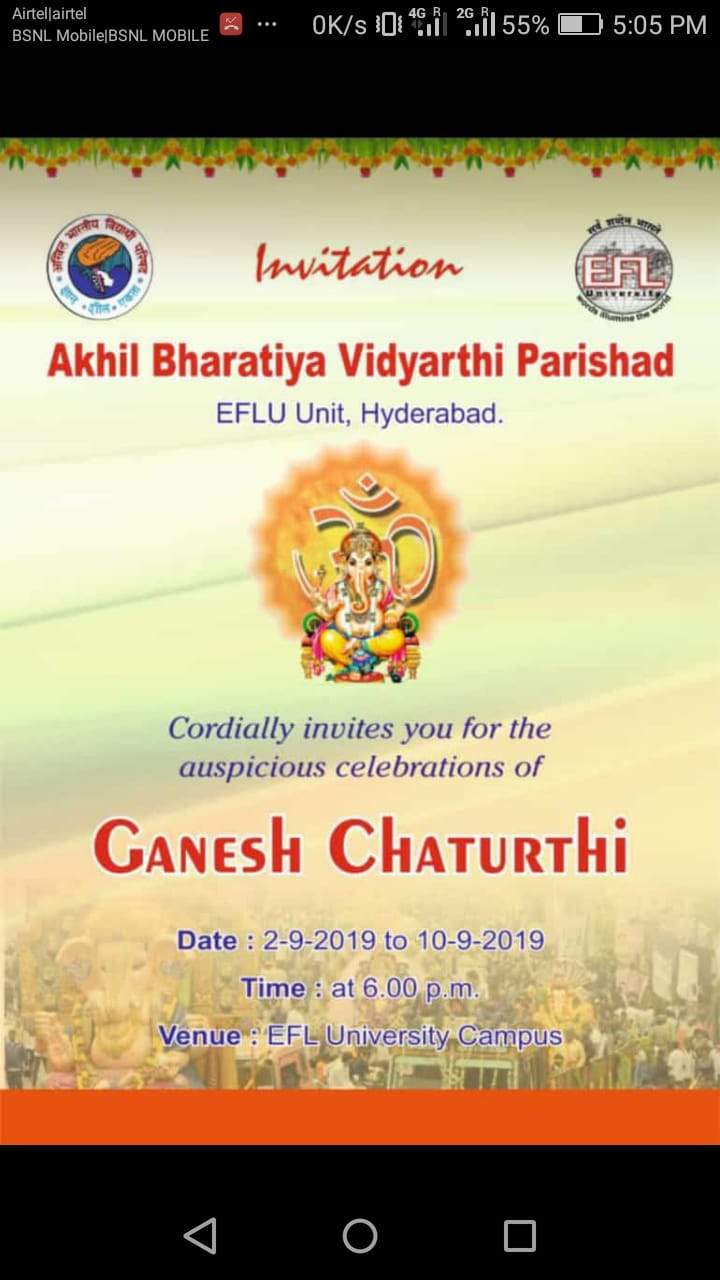 The poster that was circulated before the celebrations

The students have alleged that the Ganesh Chaturthi celebration was conducted by the ABVP as a poster had been circulated by the organisers as WhatsApp statuses, as well as on different groups on social media before September 2, which is before the Ganesha idol was installed on campus for the celebrations. "No political organisations are allowed on campus, all are banned at EFLU. But the poster released online on WhatsApp clearly stated that the ABVP was organising the festival this year. Earlier, staff and students contributed and conducted the programme, but it was pretty clear this time some kind of fund or outside help was sought," added the student.

Regarding the same issue about a political organisation being involved in events on campus, the Students' Council at EFLU had approached the Proctor and he said he will speak to the Vice-Chancellor and request him to act on it. However, there was no response on that front and so the Students' Council gave a letter to the office of the VC, to which they are still awaiting a response.