Students of the varsity had organised a mass event on October 9, 2019, to write letters to PM Modi, which the administration attempted to stall, eventually suspending six of them

The six students of Mahatma Gandhi Antarrashtriya Hindi Vishwavidyalaya in Wardha, Maharashtra, who were expelled last week for organising an event to write letters to Prime Minister Narendra Modi on lynching and lock down in Kashmir among other issues, have been reinstated by the varsity, according to an order issued on Sunday revoking their suspension.

A letter issued by the MGAHV administration earlier said that the students had been expelled on the grounds of “violation of model code of conduct” and “interference to administrative process”. However, expelled students had denied the charges terming their expulsion as “an attempt to crush those voices who opposed saffronisation of the university founded in the name of Mahatma Gandhi”. At first, the varsity had by mistake suspended one ex-student who had already graduated from the university. Later they replaced his name with another current student. 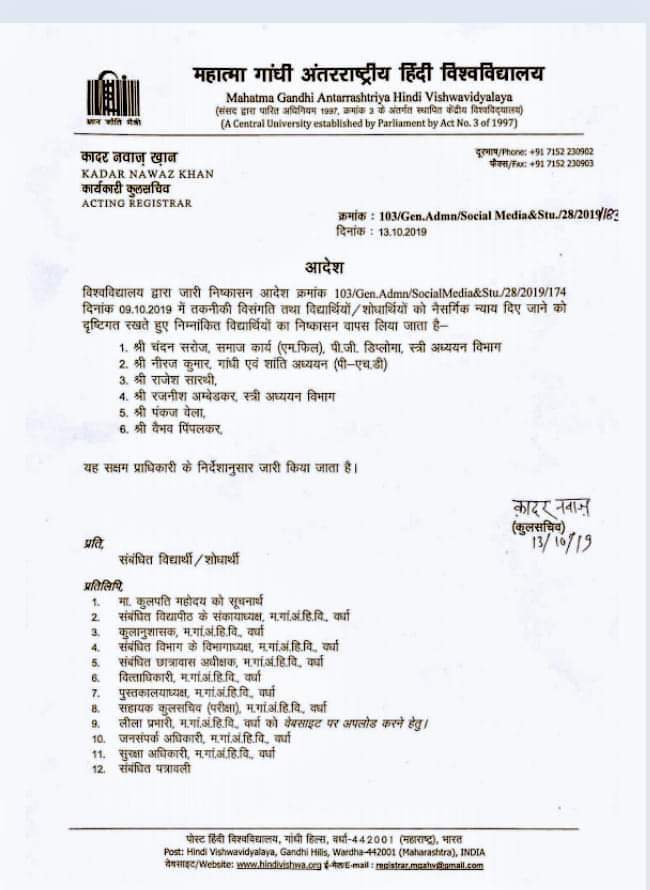 Student body organisations like the All India Students Association (AISA) have said that the revocation of the suspension is to be considered as a victory for the students' community. "This is victory of the students community as it forced the administration to take its suspension order back. The suspension was in line with the Modi government's policy of silencing students and criminalising dissent in campuses. Students and youth of this country will continue to speak against every injustice," Kawalpreet Kaur, former AISA president at DUSU told Edex. AISA also released an official statement saying that student unity has won.

Students from other universities and student bodies had also alleged that this suspension was an attempt by the university administration to suppress voices of dissent. "Nowadays, vice-chancellors are appointed as propaganda vending machines by the Modi government to control the students' every day lives. One is expected to accept it without any debate. Any kind of protest in any way is considered resistance and a sedition case might be slapped against you. The government wants to create a nation in terms of the Hindutva ideals and also follow the Savarkar model that wants you to be loyal to your oppressors and seek mercy for your mistakes. Where we students are standing up against injustice is the India these people don't want. They hate anyone who think or speak out. It is almost similar to Hitler's Germany, who were anti-intellectuals. But, we can't let Hindustan become Lynchistan," says N Sai Balaji, former JNUSU president and AISA activist.

Balaji adds that the MGAHV incident asserts that any form of injustice can be fought collectively. "If we keep on fighting against the fascists then we will win. However, I feel the situation in our country is getting worse. People are now getting afraid to speak up and fight for the truth," he concludes.