Self-deprecating humour is this motivational speaker's favourite ploy. The audience loves a speaker who is unafraid of poking fun at himself or making himself the butt of jokes, he says

The phrase kaaranajanmudu, meaning born for a purpose in Telugu, is what Sunil Robert Vuppula uses to describe how he felt when he gave his first TEDx talk in Wilmington, Delaware. He felt like he had accomplished his purpose — “to transform the world with my communication skills”. This motivational speaker, who has his roots in Hyderabad, but currently, is settled in the US, has spoken at several educational institutions like St Francis College For Women, St Mary’s College, Gitanjali School, Delhi Public School and more.

Everywhere, he shared his tale of battling abject poverty while growing up and using his education as a tool to rise above adversities by using his education. “Not only did I overcome, but I take immense pleasure in using those experiences to encourage and inspire those who may feel downcast. If I were to be hit by a bus tomorrow, I would’ve gone with absolute joy that I ran my race well,” says Robert, who is the CMO at Digitate, a California-based IT company. In a bid to seek some inspiration from him, we asked him a few questions about his journey. Excerpts:

Tell us about growing up in Hyderabad and the tough life lessons you learned while growing up among adversities. In this light, what role did education play?
At the age of 12, our lives turned topsy-turvy because my father lost his decent job at ILO. My parents had moved from a small hamlet in Nalgonda for a better life in the big city, but that move seemed to fail. My mom was a homemaker and along with her, four of us, me being the oldest child, spiralled down into steep poverty. By the time I was 18, we were absolutely at rock bottom, clinging on to dear life. The first lesson I learned around that phase was that, “Adversity truly reveals character”. Not just mine, but that of my parents, relatives and friends too. The second lesson I learned around that time was that, “Dreams cost nothing to conceive, but to realise them, you pay with sweat, blood, and tears.” Another lesson I learned during that phase was, “Many people may be affected by a single experience, but everyone responds to it differently.” and “Education is the only passport that can get you out of the hell of penury”

Because my mother was struggling to keep us alive, I had to step up and support her. It meant that I postpone my dreams, but enable my siblings to acquire education. As soon as I was able to help my family, I realised that I was being left behind. Again, pushing aside, the victim's feelings, I battled fiercely difficult situations to finish a bachelor’s degree, an MBA and a master’s degree in Journalism and Communications, winning four out of the five gold medals in my university.

Education was the booster rocket that propelled my career into a higher orbit. Since I was already working by the time I acquired these degrees, opportunities that would’ve hitherto been closed, opened in a big way. I moved to Bengaluru to be Acer’s (Taiwanese MNC) first Marketing Director and there was no looking back after that. Even today, sometimes I might miss the fact that I missed out on a premier business school education, but what I learned in the school of hard knocks proved to be far more precious and valuable.

"Communication skills catapulted me into the corporate world and wherever I go, I spread cheer, goodwill and hope," says Sunil Robert Vuppula

How did you arrive at your goal 'to transform the world with my communication skills’? In the same context, do tell us about your rise as a motivational speaker?
While I was going the troublesome years, the only silver lining of that phase was whenever I got an opportunity to compete in an inter-school competition, I enjoyed public speaking. The love of homiletics emerged because of the preaching I was exposed to since I was a kid. I had joined the Young Orators Club at the YMCA, which even today, is a legendary place for thinkers. Even at work, whenever an opportunity opened, I would volunteer to share and speak. In other words, till someone asked me to hush, I would just go on. As soon as I turned around my tumultuous journey, many groups invited me to share my story and occasionally, parents would ask me to counsel their young kids. But since I would visit Hyderabad only for a few days, the opportunities would be confined to a few. It was in this context I Will Survive was born. A channel that would speak to audiences even while I was physically absent. So my speaking led to the book which in turn, increased my credibility as a speaker. I am not a full-time professional speaker; I am an evangelist of hope and the vision is to create impact through my story.

Can you name a few educational institutions, especially in Hyderabad, where you have spoken? And tell us about how many people your speeches have impacted to date and how many speeches have you given?
Where I lived in New Jersey, I taught in Rutgers, NYIT, William Paterson University as a guest lecturer. In Hyderabad, I have spoken at St Francis College For Women, St Mary’s College, Delhi Public School, Geetanjali School, Wesley Degree College, Stanley College of Engineering and Technology for Women and so on. In addition to Osmania University, my alma mater, I taught at a few MBA colleges like JNTU, David Memorial Institute of Management and so on. 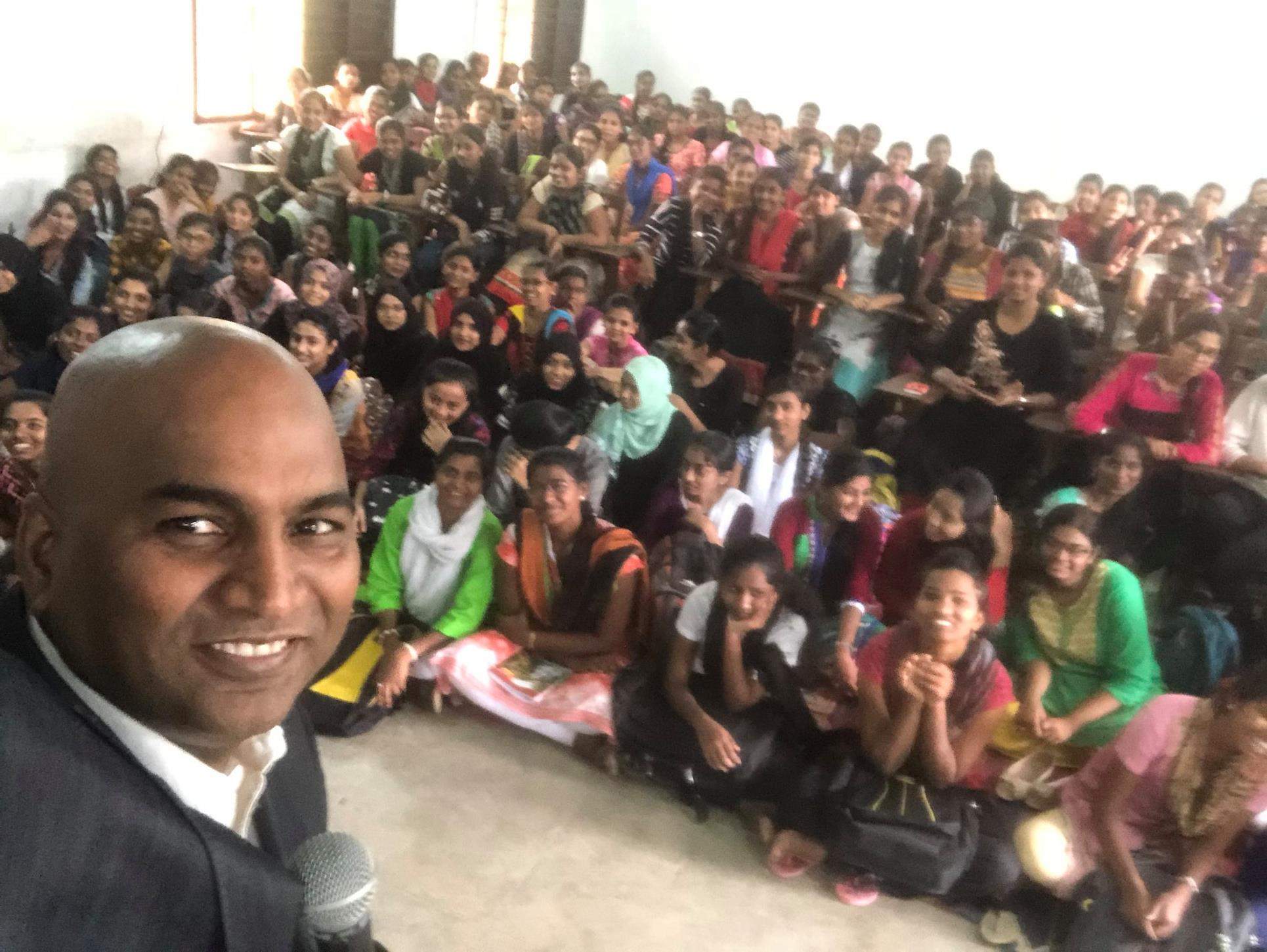 Motivating, for the moment, through a speech can be a real booster. But what techniques or stories do you use to ensure that they are recollected in times that people need it the most?
There are many tools that a speaker uses in the art and craft of communication, most notably storytelling. The ability to weave in a relevant story, snippet or anecdote that illustrates the point is essential to the audience. Long after the abstract ideas are forgotten, they remember the story, or even if they forget the story, they remember the emotion they felt as they heard the speaker tell the story. The second element is answering the WIIFM — What’s In It For Me? If a speaker wants to engage the audience, he needs to see the world from their vantage point. Finally, the enthusiasm of the speaker is essential. If I am not exuding energy and passion, how can I inspire and move them? Like all disciplines, public speaking is a skill that is burnished across many settings. Whether I was speaking to groups in London or New York, or the young people in Vizag or Chennai, the ability to connect with their lives comes from finding common ground and building the conversation on that foundation.

To motivate, one needs to remain motivated throughout. What motivates you?
My motivation comes from a deep desire to impact before it’s too late. I hate regrets and missed opportunities. I would rather try and fail, ask and be rejected, risk and look like a fool than wonder what would have happened. For example — After finishing my Polytechnic course, I had a choice to join South Central Railway or ECIL, known to be secure jobs those days. But this belief that God created me with a purpose and that my life is meant to be a daring adventure allowed me to reject those safe opportunities in exchange for an exciting immigrant journey. Today, I am living my dream of travel, motivational speaking and meeting unusually gifted people because I was willing to play a different game. Each morning I spring out of bed because of the adventure that awaits me, of making a difference to everyone whom I can potentially impact. Ralph Waldo Emerson said it best — It is not length of life, but depth of life. 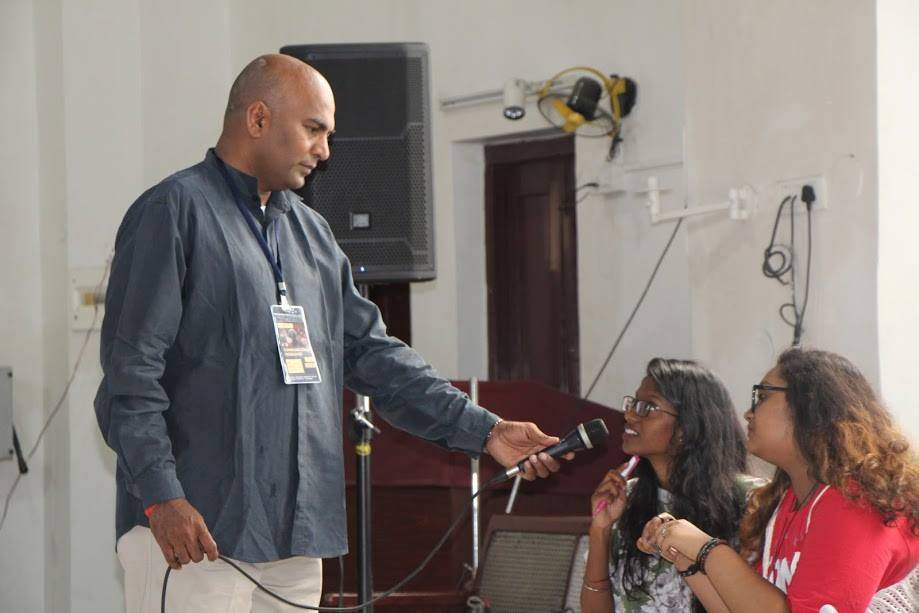 Do tell us about the transformational programmes you conducted at East Jersey Prison. Any other interesting initiatives you have undertaken or plan to undertake?
My experience at Rahway Prison in New Jersey taught me about gratitude. When I interacted with those serving life and long sentences, I discovered that it could’ve been me. If my life did not turn around during my Polytechnic years, I would have become a rowdy sheeter and who knows how the script would have unfolded. So, when Toastmasters offered me a voluntary role, I was able to help teach public speaking and leadership. I have also learned that we should not judge anyone based on their past mistakes. They paid the price and are serving time and if we can help them become better, I would like to support it. I am toying with the idea of teaching technology to these prisoners. Many of them have been away from society for too long and one of the most difficult elements of reintegration into society is the fast pace of change that leaves them perplexed and bewildered. So, if there is a way of helping them become tech-savvy, they can find themselves less intimidated and they are less likely to become repeat offenders.