Members of both the factions, SFI and Independent Consolidation (IC) are taking part in the agitation and demand that the administration should make it clear how they identified the suspended students

Students of the Presidency University in Kolkata launched a sit-in in the main varsity building on Tuesday evening, preventing the six-member inquiry committee, formed to probe the protests on campus in September, to leave. The sit-in began even as the indefinite fast by six students of the Presidency University, including three suspended students, entered 96 hours on Tuesday evening demanding the withdrawal of the suspension.

The three students, Sayan Chakravarty, second-year post-graduate student of Economics from Masagram, Bardhaman; Anisur Haque, third-year student of Geology from Rampurhat and Anit Baidya, another third-year student of Biological Sciences from Basirhat, were suspended on December 19 for a period of six months, after they were identified by the committee for locking the gate of the university and preventing the Vice-Chancellor and other officials from entering the premises on September 10 during agitation over the handover of the Hindu Hostel was on.

The inquiry committee members were not restricted from moving around within the campus by the agitating students who wanted to know on what basis the committee had earlier recommended the suspension of three students for locking the campus, one of the agitating students, Ujan, said. "We will continue the sit-in outside the chamber of the committee members indefinitely until there is a satisfactory reply on the part of the inquiry panel on what basis they had identified the three students as troublemakers on September 10 and recommended their suspension. We will not prevent them from leaving the campus which they can only do by physically removing us," he added. 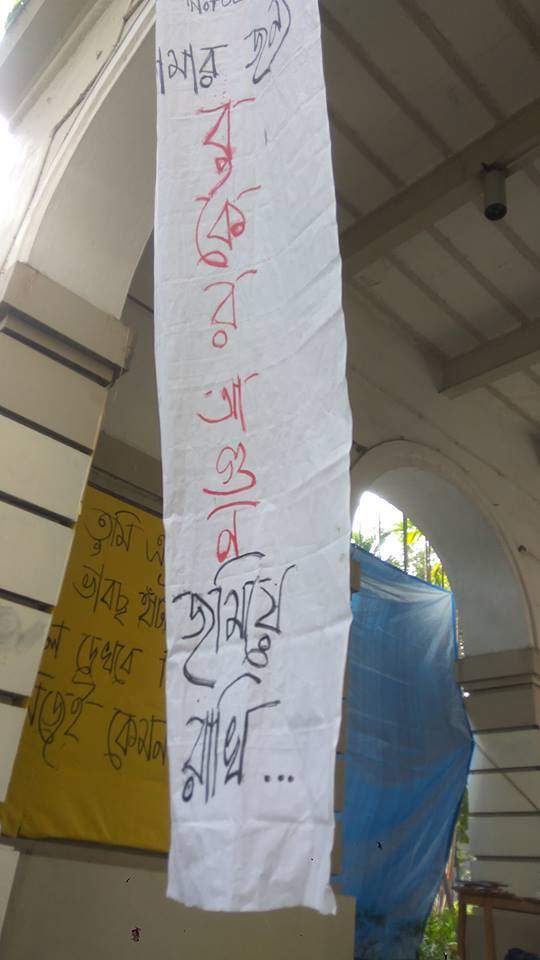 Indefinite hunger strike: Members of both the political factions, SFI and Independent Consolidation (IC) are taking part in the agitation

"JNUSU salutes the fighting spirit of the protesting students who have fought a protracted battle to reclaim the Eden Hindu Hostel, which was closed for over three years. Not surprisingly the Presidency VC has come up with these suspension orders to curb the growing strength of the students' movement which is bound to raise its voice against the corrupt administration in the days to come," read a statement by the JNUSU.

The JNUSU demanded that the suspension orders are revoked immediately and instead the VC and the administration must face inquiries for the massive delay in renovating the hostel and giving it back to the students only after pressure from the students' struggles, "The JNUSU extends its solidarity and support to the students of Presidency University. The students have been sitting on an indefinite hunger strike for over 100 hours now, as a mark of protest against the decision to suspend three students by the VC, Anuradha Lohia."

"Perhaps it is important to note here, that while Presidency is being dismantled brick by brick and lives and careers of her students destroyed - the Presidency College Alumni Association and its various acolytes are busy preparing for the gala celebrations of the Founder’s day starting on January 20, 2019.  These festivities, which allegedly celebrate Presidency, took place this year when students are on Hunger strike - something which is remarkably unprecedented. Since, the official Alumni Association has retired to the criminal role of an administrative/ruling party appendage - let this post and the picture attached work as a news bulletin to alumni and well-wishers of Presidency everywhere. Let us stand in solidarity with the suspended students and against this administration," Debojit Thakur, a former student of the university wrote in one of his Facebook posts before the hunger strike began on January 18.

Members of both the political factions, SFI and Independent Consolidation (IC) are taking part in the agitation. The students said that while a written appeal from the three accused students to the university authorities for revoking the suspension order had been turned down, they were asked to issue 'unconditional apology'. "We can consider that only after fully knowing on what ground the three were suspended," Ujan added.

Vice-Chancellor Anuradha Lohia on Monday appealed to the students who have been on hunger strike to call it off. However, sources said that the strike won't be called off and the students have not responded yet to the VC's appeal.