Yuva Thirang's objective through Kalam Bharat, and their other programmes, is to awaken the spirit of Dr APJ Kalam within all youngsters. The organisation's founder is Phanindra Kumar

It was in 2008 that the late Dr APJ Abdul Kalam visited a school in Sangareddy, Telangana to strengthen the base of his Lead India 2020 Movement to empower the youth. "Be unique! Everyone is running behind money and in this race, they tend to reach a stagnation point. You choose a different path!," he said in his speech. Among the students listening to his wise words was Phanindra Kumar. And it is these words that he remembers till date and finds them reverberating in every facet of his life. It all started with small acts for Phani — as small as giving away his pocket money to the ayahs at school — but along the way, Phani found his way of being unique. "I decided to join the social sector and dedicate myself to the cause of nation-building," he adds proudly. 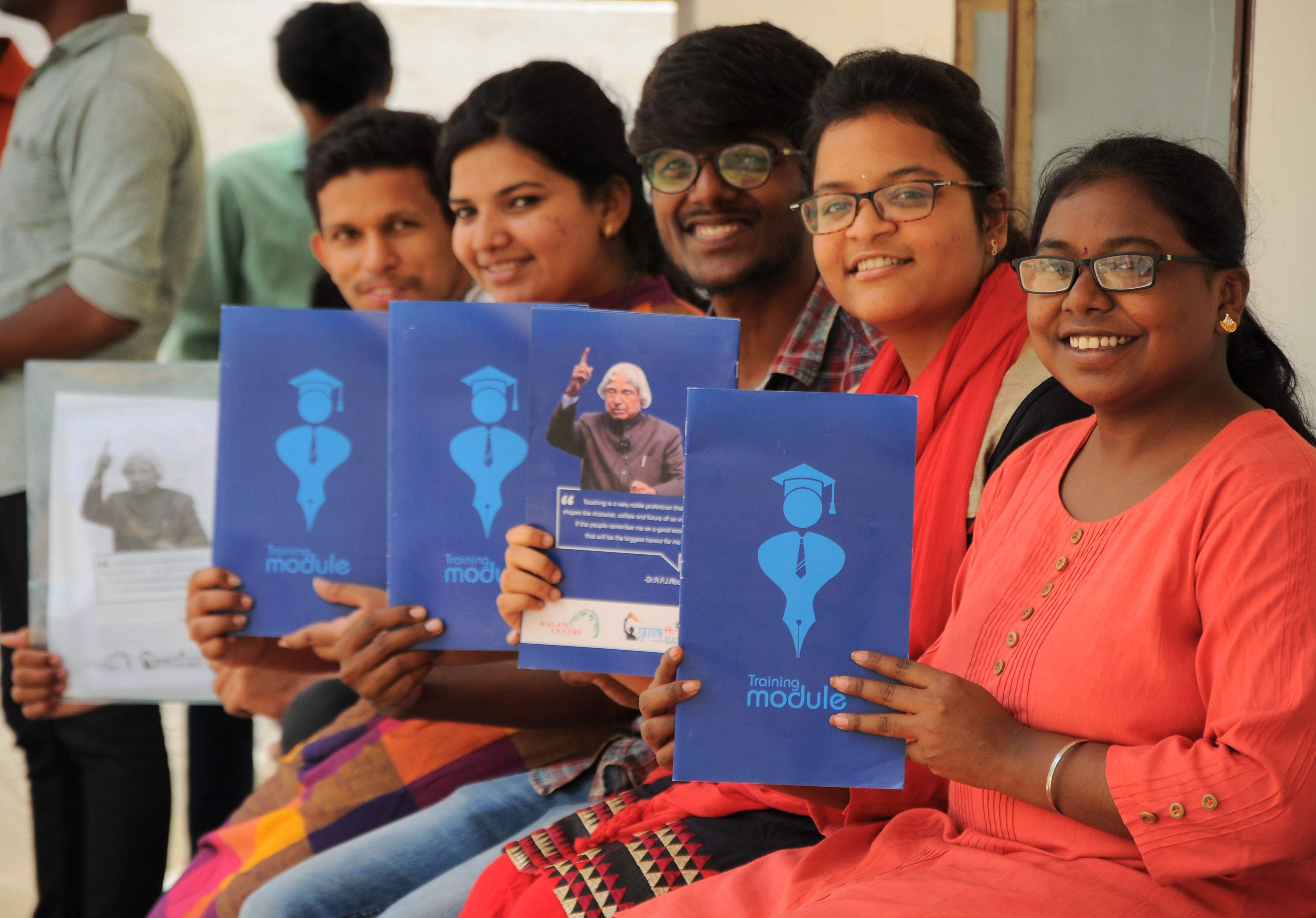 His way or the highway
UNESCO Hyderabad Club and a stint with social activist Sunitha Krishnan are just two of the many initiatives and causes that Phani worked on. And in 2014, he sought an audience with Dr Kalam and this time, Phani wanted to invite the former President of India to a Youth Convention on Patriotism. "Upon conducting a survey, we realised that after school, the youth doesn't really celebrate the spirit of national holidays," says Phani, outlining the survey which was much more in-depth. After flying to New Delhi, waiting outside his office at 10 Rajaji Marg, Phani was finally able to meet his role model, in person, while the scientist was out on his evening walk. Visibly impressed with Phani's work, Dr Kalam suggested, "Why are you working as a volunteer, you are capable of running your own organisation." And this is the story of how Yuva Thirang, the Hyderabad-based initiative that believes in harnessing the power of youth to help make a better India, began.

After taking us through his events ever since they started operations, we pause to discuss in great detail the project that has the attention of the 25-year-old now, Kalam Bharat which they are carrying out with Kalam Centre. The aim — to create young leaders to take the vision and mission of Dr Kalam forward. As many as 850 undergraduates have been trained and dispersed in 400 schools across four districts of Telangana, Hyderabad, Ranga Reddy, Medchal-Malkajgiri and Sangareddy, to set up Kalam libraries, provide sports equipment and deliver sessions on topics like water conservation, waste management, sanitation and more. What makes this 15-week programme different is that there is no interview process for the selection of volunteers. "Dr Kalam used to say, 'Don't judge people based on their communication skills'. So we welcome anyone and everyone who is interested," says Phani, who was pursuing Development Studies at NIT Rourkela, but had to drop out due to health problems. As many as 1,000 students turned up for the induction programme and finally, the number was pruned to 850. 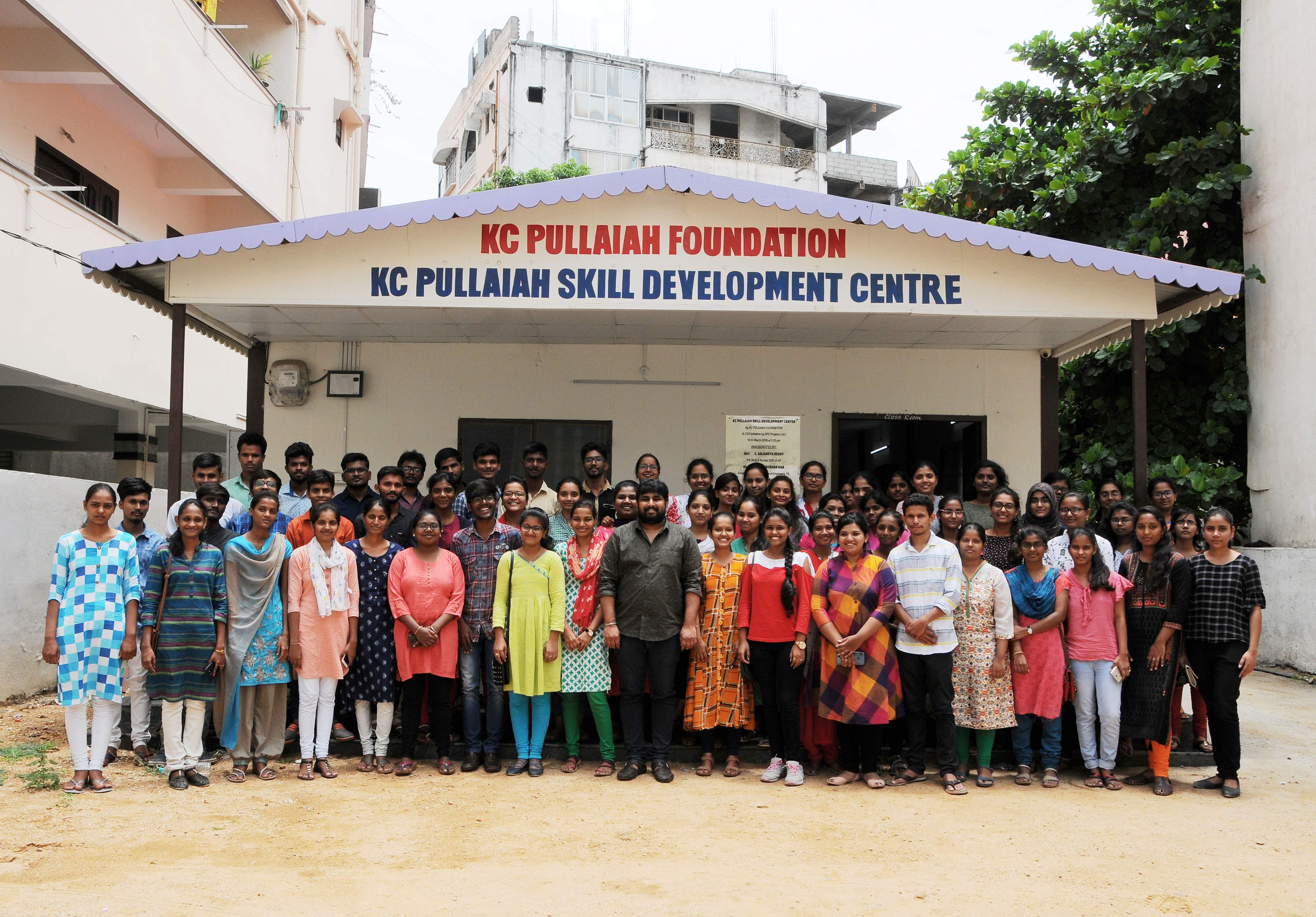 Group picture time: Few of the students along with Phani | (Pics: S Senbagapandiyan)

Everyone is unique here
Coming to the main task, Phani, who is also fondly addressed as 'Phani Kalam', explains how the Rs 4,500 required for setting up the library and equipment is being crowdfunded by the volunteers through donations from door-to-door drives. "This teaches the volunteers patience, convincing skills and how to really connect with people emotionally," says Phani and asserts that he is forever available for students to resolve any issues which arise. "I tell the volunteers that till today, you have only been taking from your parents and now, it's time to give. The library, which is set up in the Principal's room, the staff room or wherever there is place in the school, is inaugurated by the parents of the volunteers," he explains and this lesson has been directly borrowed from Dr Kalam's words of making one's mother happy. "Whenever we approach schools and appeal them to allot a PT period in their curriculum they tell us, 'What's the use? We don't have any sports equipment'. And by supplying sports equipment, we don't want to give them a chance to make any more excuses," says the youngster explaining why sports is equally important to their mission.

Students were inducted and trained on July 27 and 28, 2019 in Hyderabad. They are from as many as 30 colleges in Hyderabad

Within the next three years, Yuva Thirang wants to implement Kalam Bharat in all districts of Telangana and next, they are targetting Mahbubnagar, Nalgonda and Vikarabad districts. "We want youngsters to be patriotic, not only from the mind, but also from the heart. There is a huge difference between the two, if you know what I mean," says Phani and rues the fact that, "The youth of today is working, but not with compassion. That is missing." And through Yuva Thirang, Phani wants to ensure that, in Dr Kalam's own words, the youth should "have courage to think differently, courage to invent, to travel the unexplored path, courage to discover the impossible and to conquer the problems and succeed" and of course, to be unique! 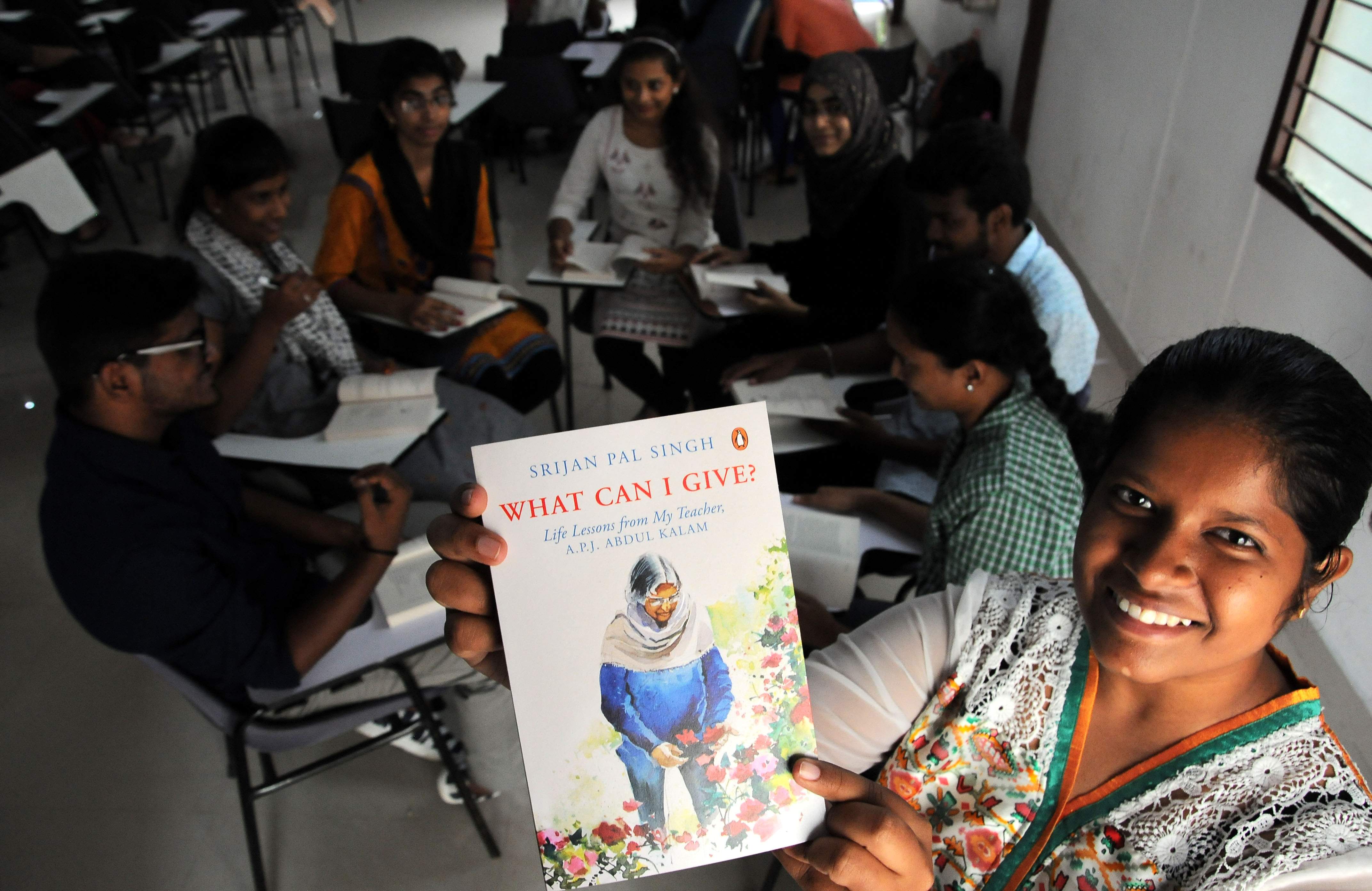 Hold it up: A student with Dr Kalam's book What Can I Give? | (Pics: S Senbagapandiyan)

Young blood speaks
We had the chance to meet a few passionate youngsters who are relentlessly working for Kalam Bharat and here's what they had to say: 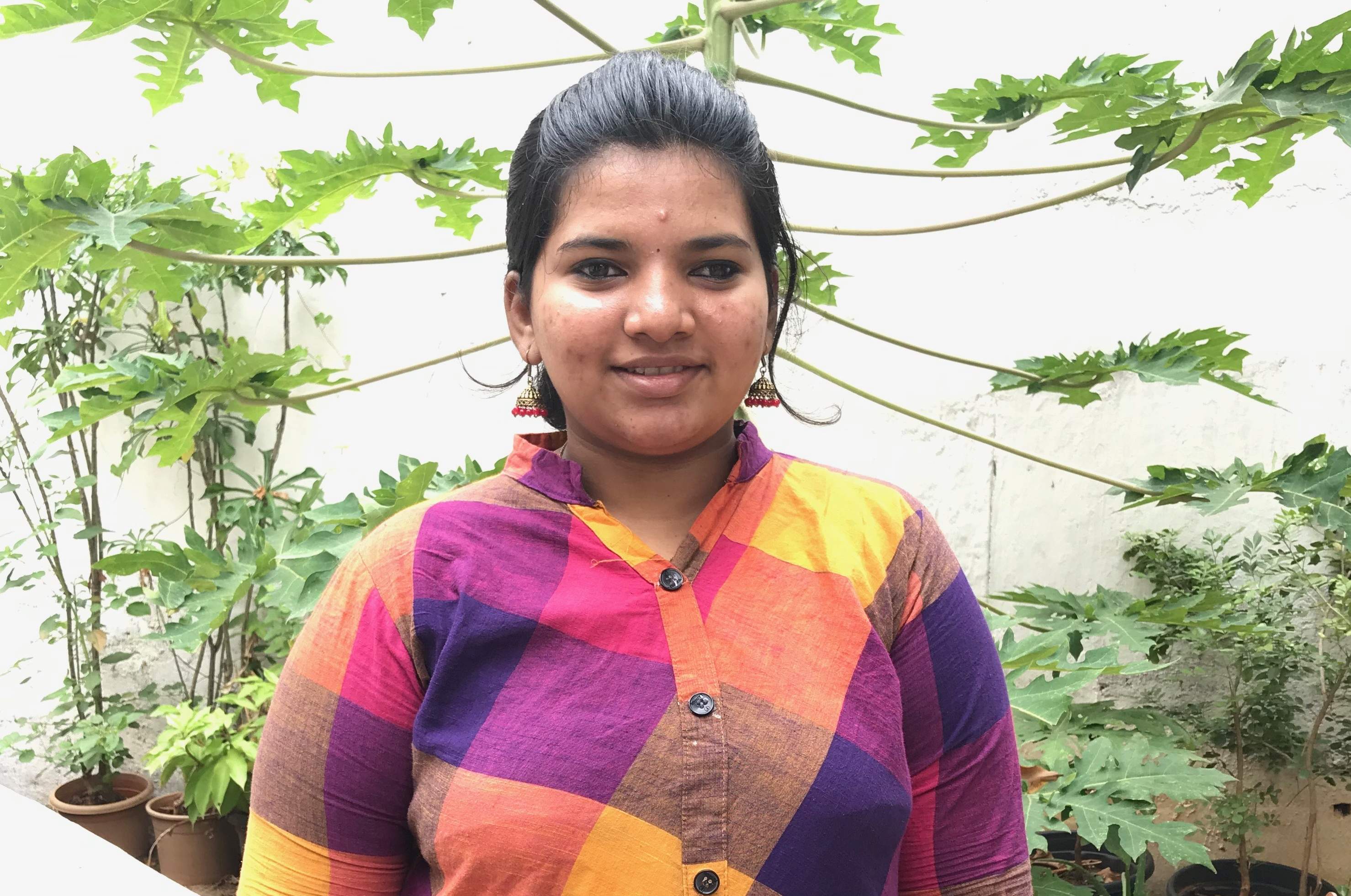 Inspired by her grandfather, Akshitha took up social work with vigour and joined Yuva Thirang around one and a half years back. "When I joined here, I thought that we will just have to collect some funds and donate, like in other organisations, but Yuva Thirang is so hands-on," says the 20-year-old. Talking about Kalam Bharat, she says that it's a great platform to connect with students over a period of 15 weeks. "Today, the students are so attached to us that if we don't visit the school, they keep waiting for us and when we do, they open up to us and share their personal problems," says the student of SVIT adding that through the sessions, they touch upon topics which are otherwise absent from their textbooks. 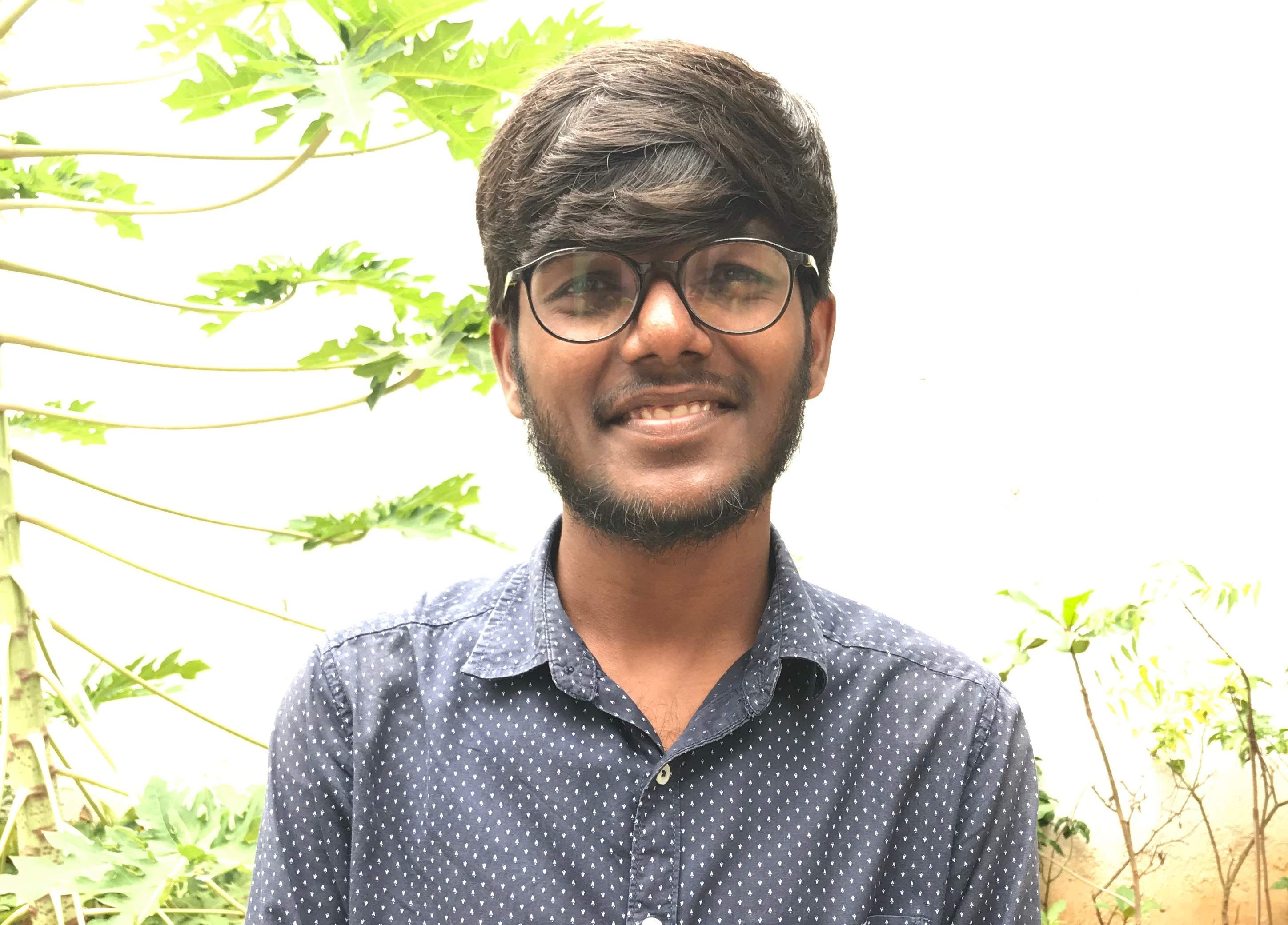 Born in Mallareddypet, Kumar has been associated with Yuva Thirang since 2015. "When I spoke to the principal of the school, she told me that they get a fund of `50,000 for the whole year, whereas their monthly electricity bill is `4,000. You can do the Math and work out how much money is left after the bill is paid. Even the chalk is brought by the staff," says the 22-year-old, who said he has no qualms about being allotted an all-girls school. "I don't have any sisters in the family, so I treat all of them as sisters," says the former SVIT student with a big smile. The students continue to tell him about their problems like harassment and more. 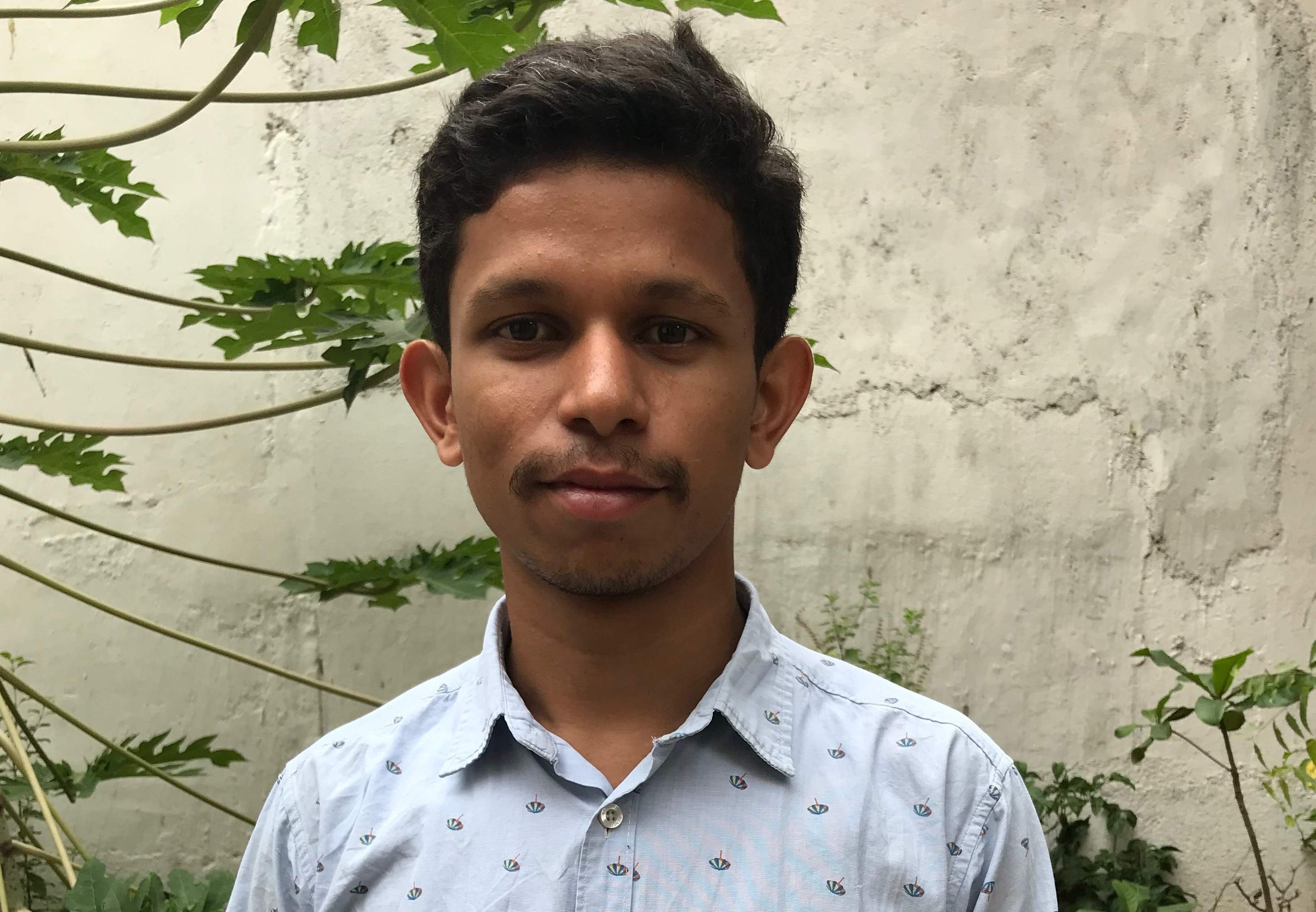 Having conducted plantation and blanket donation drives in his area, joining Yuva Thirang nine months back is this 20-year-old's way to help make a more substantial change in the social sector. "In one of the schools, there are only three boys, so we are planning to offer indoor games. And in the other, one student is a national-level athlete, but due to financial reasons, he is not able to pursue it, we are trying to help him take his passion forward," says the student of Narsimha Reddy Engineering College. Speaking about enjoying and still volunteering, Chandra says, "Sitting in a café and enjoying is not wrong, satisfaction is key. And it is work like this that gives me satisfaction," he says. 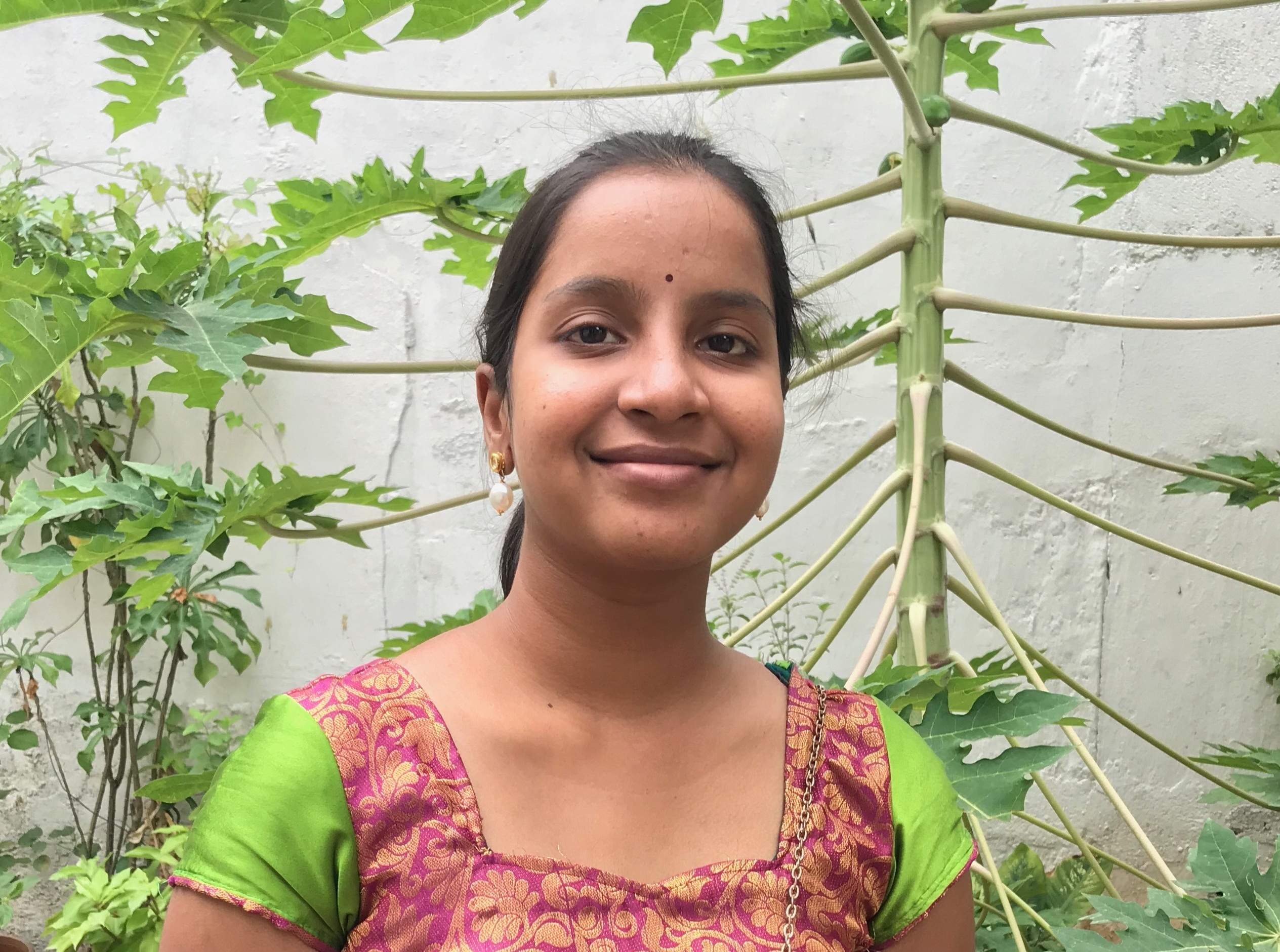 Visibly covered with goosebumps, this 21-year-old tells us about how, when on the very second day, "Girls were telling me about how people on the roads harass them and how after class X, a few parents intend to get them married and stop their education," says the student of Narsimha Reddy Engineering College. Personally, Harshita has been through her fair share of problems, "which have made me the strong girl I am today. So I try to help students and solve their problems," she says. In this scenario, a library is important so that they can gain more knowledge on how to tackle these issues, she asserts. "While talking about child marriage, I spoke about Balika Vadhu, (the Hindi TV series based on the same topic) and there were able to relate to it," she says. 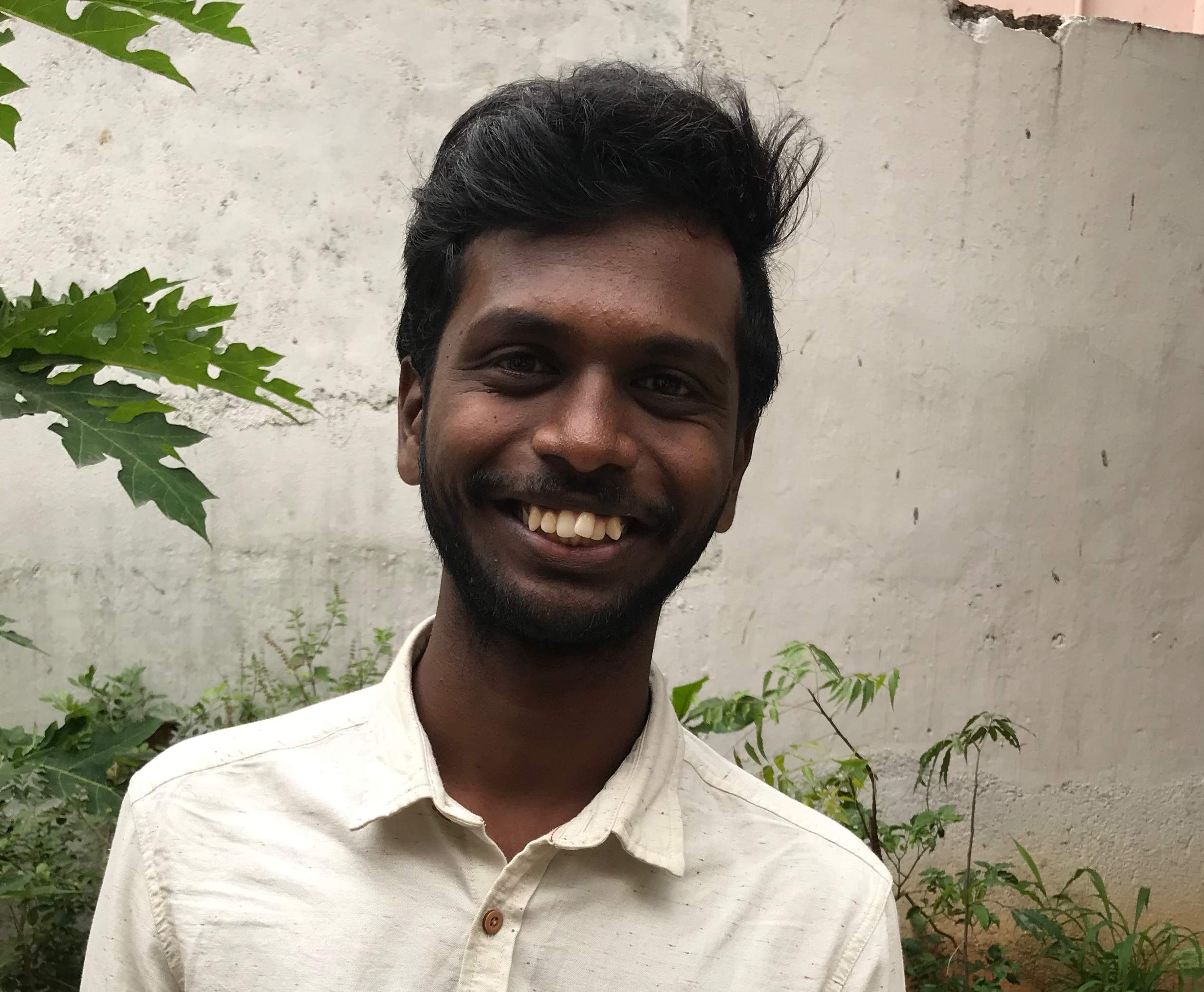 The 23-year-old says that Kalam Bharat is a great opportunity for government schools students to learn about topics like water conservation. "Most of the students even started taking water conservation seriously like they use used water to water plants," he says and adds how the students are so keen to learn that they want him to continue the session even after 4.30 pm. Harish intends to become an entrepreneur, donate 30 per cent of his earnings and even start an NGO. "Yuva Thirang has changed me a lot and taught me important qualities like patience. Before, I used to be very scared to take seminars in my own class, but now, I have conquered my stage fear," says the student of St Peter's Engineering College and adds that students treat him like their own brother.

Eventful years
These are few of the things that Yuva Thirang has been up to:

- 2015: Youth Conference on Child Labour and Human Trafficking with guests as Swati Lakra, incharge of SHE Teams and Chief Justice of High Court Subhash Reddy
- 2016: We Stand, We Support and We Change with guests as three acid attack survivors who spoke about their experiences
- 2017: Within 12 minutes, 25 students painted a 4,500 feet image of Dr Kalam with close aide of the late DR Kalam, Dr Srijan Pal Singh as the chief guest at TKR College of Engineering
- 2018: Utkarsh Yatra where 40 students travelled 3,200 km to talk about social entrepreneurship in rural schools 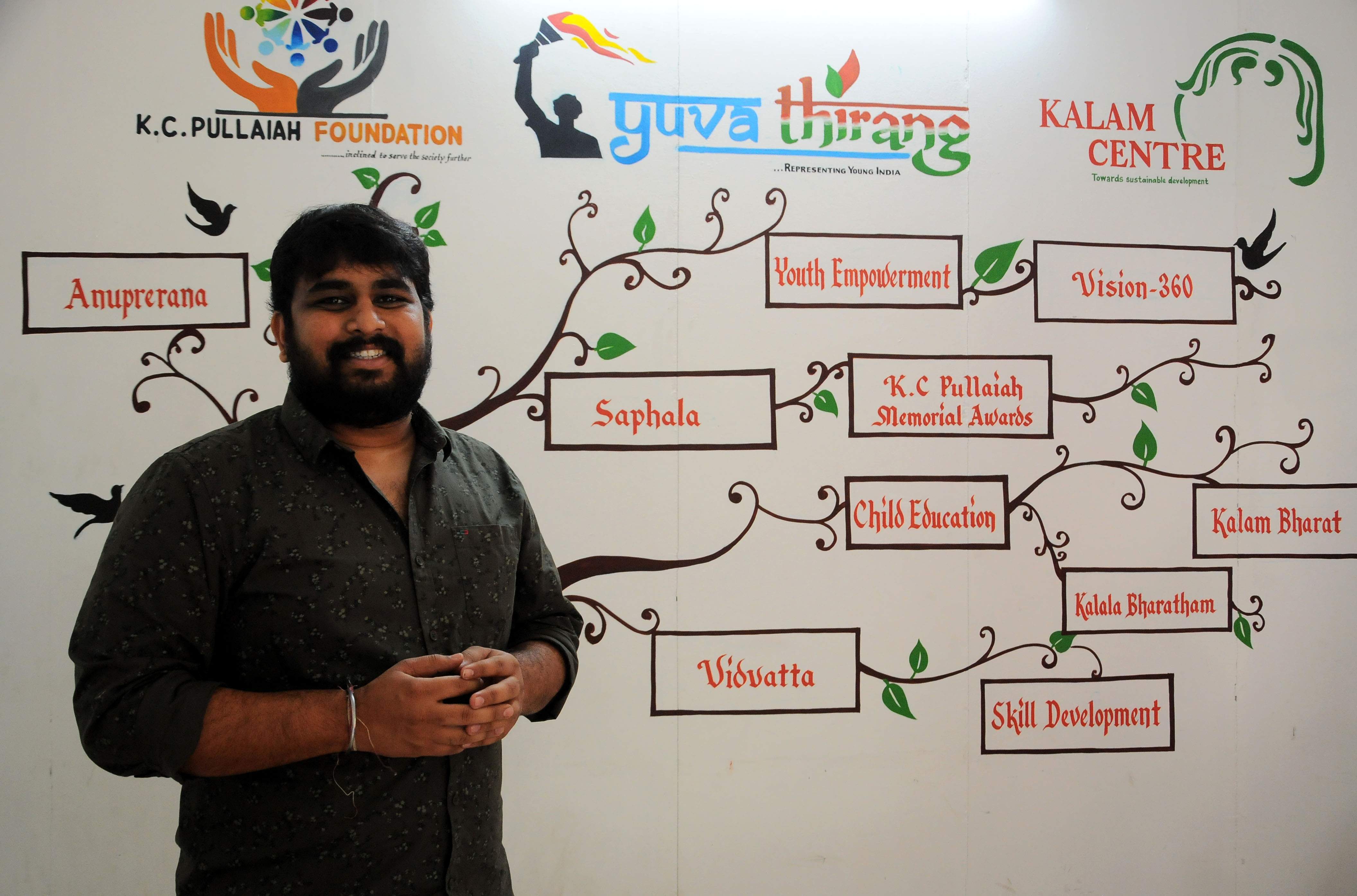 For more on them, check out facebook.com/yuvathirang