#HikeResearchFellowship: Why it doesn't pay to be a research scholar in India

India's much-touted youth are great when it comes to IT, engineering and so much more. But our researchers are still under-funded and face a societal stigma that runs deep. This is why

Research scholars across India are protesting and campaigning for a stipend hike. But no one seems to be too bothered. Despite the fact that a Junior Research Fellow (JRF) or PhD student gets paid Rs 25,000 per month and a Senior Research Fellow (SRF) Rs 28,000 per month — less than what a Grade D government staffer earns. So they went the millennial route. They created #HikeResearchFellowship and have been creating some noise on social media.

These young researchers demand a regulatory system that will update their stipends every couple of years. They have sent an official note to the Ministry of Human Resource Development but are yet to receive an update. "We want to reopen the campaign page that we had during our 2014 campaign that helped bump up the stipends from Rs 16,000 - Rs 18,000. We are aiming to get the support of at least one lakh students," says Mahesh Kumar Singh, a PhD student at IISc Bengaluru, who is spearheading the campaign.

Researchers are scraping the bottom of the barrel

The new stipend scale implemented in 2014 made little difference, says Mahesh, as the tuition fees increased subsequently and that left the students in the soup again. "We were also promised unofficially that they would increase the stipend in about four years. Its been four years and they have not said a word. That is why we have decided to protest. This time we have support from Indian students abroad," explains Mahesh. But the problem is much more deep-rooted and complex.

India is a growing superpower with more than 50 per cent of its population below the age of 25 and more than 65 per cent below the age of 35. We have the highest number of youth in the world but are we giving them the respect they deserve when they decide to become career academics or researchers? Only one in every 200 students who graduate from degree college go on to enroll for PhD and only 50 per cent of them complete their degree. Clearly, something is wrong.

Show them the money, honey

A major reason for the huge dropout rate of PhD students is, you guessed it, insufficient financial support. "A student finishes his/her post-graduation at the age of 22 or 23 and by the time they are done with their thesis they are around 27 years old. The incidence of drop out is highest when these students are 25," says Shubhrokoli Ghosh, a 27-year-old SRF pursuing his PhD in Physical Sciences at IISER Kolkata. "They see their college and schoolmates taking up well-paid jobs while they slog extra hours at the labs or in research." 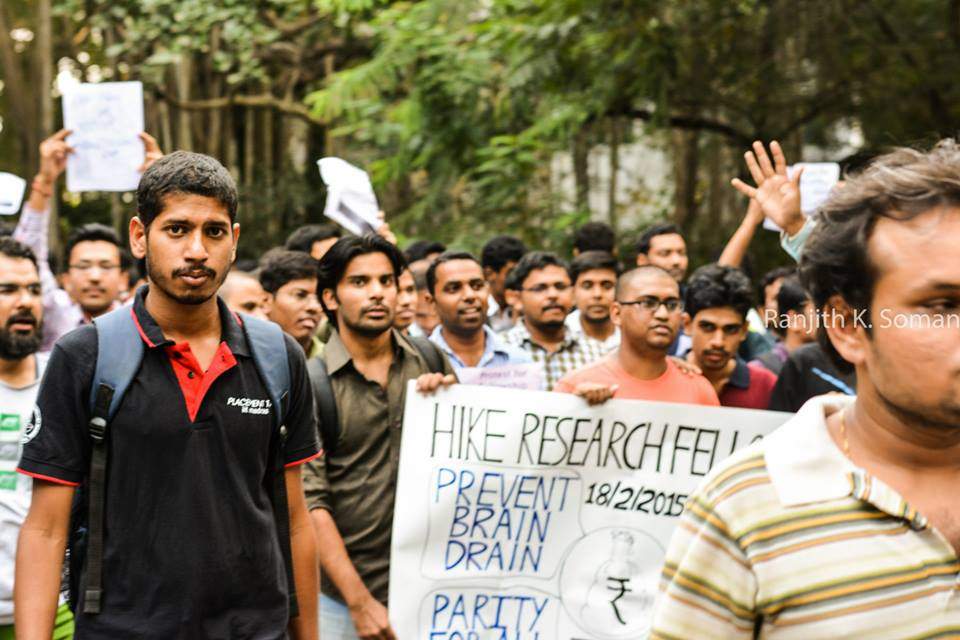 Who will guide these researchers?

A person is at his or her peak from 18 to 25 years of age in terms of performance. Gross Enrollment Ratio of a country tells us how many of them are actually putting this to use. "The Gross Enrollment Ratio tells us the percentage of youth who are enrolling for higher studies. The ratio is above 80 to 90 percent for developed countries like the USA. China is also not too far behind at 50 per cent. India is not in a good position when it comes to this. We have only 25 per cent of our youth opting for higher education," explains Shubhrokoli. "The government has set a target of pushing up this rate to 50 per cent by 2030. In the last 8 years this statistic has increased from 15 per cent to 25 per cent — so we can say that the government is moving in the right direction but not fast enough."

To achieve this feat India needs 40 to 50 lakh new teachers if we are to continue with the current teacher-student ratio, which is in pretty bad state itself, says Shubhrokoli. India is in dire need of more PhDs and the demand is increasing every day but we are not ready to pay them a respectable salary nor does a major part of India understand what these people do. "The ignorance of our country when it comes to researchers is very evident from the amount of its GDP (currently less than 3% for education in total) the government spends on R&D and on stipends," adds Mahesh.

A great researcher isn't hot property on the matrimony market

The problem is not just financial. The ignorance has societal challenges as well that make some students drop out. Mahesh agrees that if two guys of the same age want to get married a guy with an IT job will probably get hitched faster than the one who is pursuing his research on nanotechnology. Our researchers definitely command more respect than this and should be as revered at home as they are abroad. "The hundreds of students who leave India to pursue higher education elsewhere are often doing it out of compulsion. There are not enough jobs fit for a PhD. They do not get respect. They do not get paid well. Why should they stay?" asks Shubhrokoli. "No one wants to leave their country to settle in some foreign country unless they are under compulsion."