Roughly 200 students have been sitting-in, protesting the withdrawal of admission tests and the possible influence of the state government in the decision. We spoke to few students from the University

The students of Jadavpur University, Kolkata, have come together to protest the sudden withdrawal of admission tests at the institution. According to the university’s policy, six departments under the Arts stream are supposed to be holding admission tests every academic year, of which three departments have to mandatorily take in students only on the basis of these test evaluations. The uncalled for removal of the admission tests, along with the lack of clarity behind the decision, has led to a student sit-in since last night.


Here is all you need to know about the sit-in:

1) What is the issue at Jadavpur University?

The main issue which has led to the massive student sit-in since last night, is the constant confusion and last minute dismissal of admission tests, for subjects that fall under the Arts stream. Authorities, after eventually promising a 50-50 weightage to student intake (on the basis of merit and on the basis of admission test evaluations respectively), announced again, earlier today that no admission tests will be conducted for the current academic year.

The final decision to scrap the admission tests came after an uproar over the engagement of ‘external examiners’ for the tests.

“Since June 13, the authorities of the university have been quite dismissive with regard to the admission tests which were to be held, going back and forth, and refusing to provide us with clarity,” says Suddha Satwa Guha Roy, a second year post-graduate student of Philosophy. Adding to Roy’s statements are Syamantakshobhan Basu, an MPhil scholar who has just completed his course at the university. “The authorities have been quite arrogant, and have refused to directly communicate their decisions with the students, since the chaos began last month,” he says.

There are currently 200 to 250 students sitting in in protest, as per reports.


2) Which are the courses which mandate admission tests? 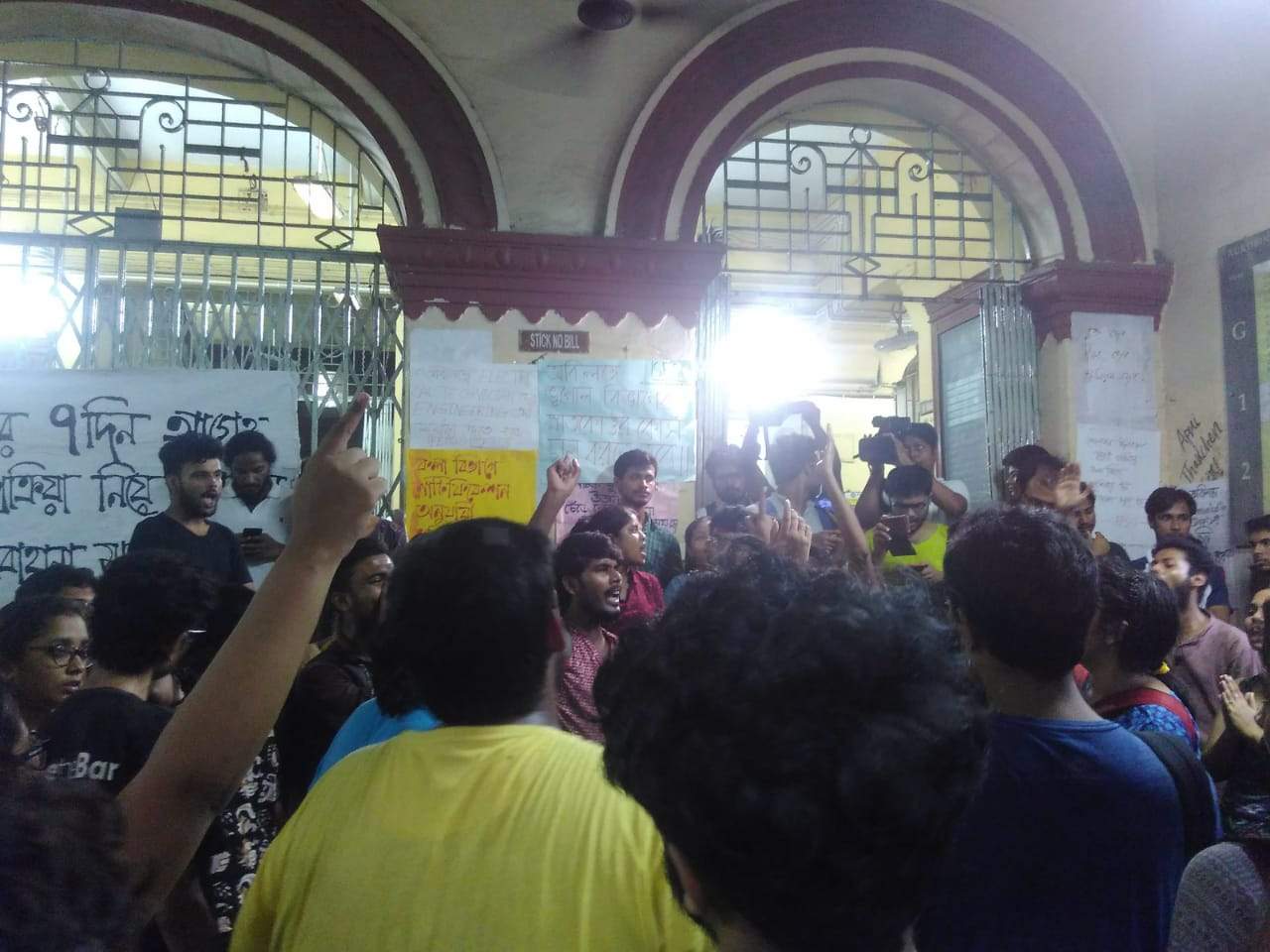 3) Why is there a sudden withdrawal of the admission tests?

According to the students and professors of the university, the authorities of the institution have refused to give any clear statements with regard to the withdrawal of the admission tests.

“We were told that there were some technical issues and legal confusions between the authorities and the EC, for which an attorney general’s advice was sought. This only led to them telling us, on June 27, that the tests will be conducted on a 50-50 basis, where an equal number of students will be taken into the courses, both on the basis of merit and test evaluations,” Roy said. The students were also additionally told, that unlike previous years, where the evaluation of these tests were done internally via a structured coding system, this year the tests will be evaluated by external examiners. Students feared that this could corrupt the assessment model and could influence the admissions. Professors, felt humiliated by the situation.

But earlier today they were informed that the admission tests wouldn’t be conducted at all, and all students for the said courses would be taken in on the basis of merit only.

“For a policy to be changed, there must have been a complaint or an issue which could have led to it. In this case, nothing has such has happened, and with the silence and confusion from the authorities, we don’t know what to think of the situation,” Roy says. Students believe that the current decision could possibly be the State Government’s doing, with their need to be able to influence and have a stronghold on the campus, which is known for its student protests.

Some reports suggest that the University is scrapping admission tests for the first time in 40 years.


4) Are the professors of the University supporting the students?

Yes. The professors too seem to be quite upset with the authorities of the university and their demands, especially with regard to the involvement of external examiners. They had earlier submitted a letter seeking clarity into the situation, but had apparently received no reply. “Our professors are quite competent and our internal assessment methods have been very transparent so far. We have their support too, in this protest,” Syamantakshobhan says. 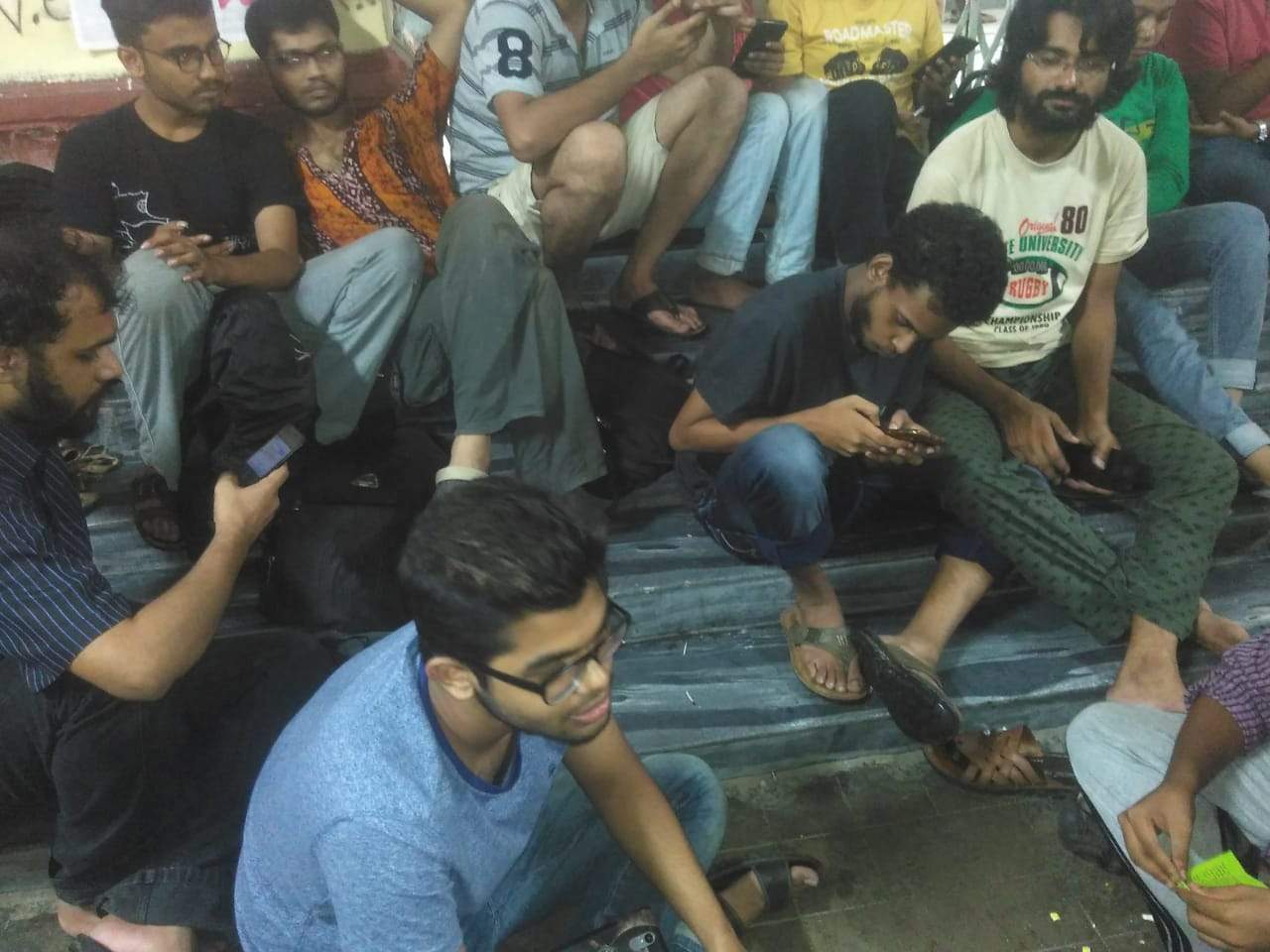 5) What are their demands?

“We currently have four main demands - a) That admission tests have to be conducted, without any change in the said policy of the university; b) There will be no ‘Multiple Choice Question’ format for an Arts admission test, because this is an absurd way of evaluation of the subjects which fall under the stream; c) The tests need to be conducted without further delay - other universities have begun their course studies, and we are still lagging back - which is bound to affect the incoming students; d) There will be no involvement of external examiners of agencies in the process of test evaluation, in order to keep the assessments transparent,” Roy explains.


6) How many students have applied for the said courses this year?

Nearly 17,000 candidates from across India have applied for the six courses at Jadavpur University this year. “We had students coming in to write the tests from places like Rajasthan, and having to go back cluelessly, because the authorities never informed them or us of the changes which they have constantly been making,” says Roy.

Jadavpur University is considered to be one of the best institutions in India and has been ranked 84th among the top 200 universities in Asia.