A 17-year-old student had collapsed during a race and died instantly, prompting the call for mandatory medical personnel during sporting events. Who's listening?

The Madras Christian College student who collapsed during a sports session, ostensibly healthy one moment and stone cold dead the next, is not alone. Shockingly, almost two years ago, a 17-year-old student in Pondicherry who was the hot favourite to win the 1500 metre sprint he was in,  collapsed after running 80 metres and died almost immediately. According to reports, the boy was rushed to the Government General Hospital, less than a kilometre away, but just like MCC student Mahima, he was declared brought dead.

The coincidences don't just end there. Much like how Mahima was remembered by her friends as being an athletic girl who loved the basketball court, the boy from Pondy was a football aficionado who is believed to have taken part in various school-level tournaments. The doctor's report concluded that, in both cases, there must have been an underlying, undetected heart condition that must have been aggravated by the sharp spurt in activity and led to their tragic ends. Tragic, truly. The loss of young lives deserve the highest degree of regret. But on that point, what we need to acutely ask is whether something as basic as medical personnel trained in Cardiopulmonary Resuscitation (CPR) or the presence of a defibrillator could have saved either life from ending so soon.

Is Sport For All under Part 4 or Part 5 of CBCS?

In a letter issued by the College Union Society after a meeting with the Sports Committee on Friday, there was a rather curious recommendation mentioned.

Recommendation #5 read thus: It was resolved to recommend to the Academic Council through the Board of Studies that for the year 2019-20 the SFA programme be shifted from Part 4 to Part 5

Here's why this is strange. According to the MCC website, the section on the Choice Based Credit System (CBCS) currently lists the Sport for All programme as already being under Part 5 - which is listed as an extension activity, along with NCC, NSS and the Scrub Society.

Part 4 is reserved for subjects that you actually write an exam for - for subjects such as value education, general courses, Tamil, Skill-based courses and Environmental Studies.

The Madras Christian College is clearly not equipped in this regard if students and professors are to be believed. Most of them told us that the medical centre is more a cuts and bruises, fever meds kind of set up, rather than being able to deal with severe injuries. While the statement from the College insisted that a medical centre was present in the college, it is evident that emergencies are beyond their scope as the professor who was there on the sports field chose to rush her to a hospital just outside the campus, on first instinct. After a meeting of the sports committee on Friday, the College Union Society issued a letter that stated that one of the terms agreed to by the college was that a 'nurse with a medical kit and first aid kit would be present during all sport for all activities in the future'.

This thought occurred to Dr Z Zayapragassarazan, Associate Professor of Educational Technology, Department of Medical Education, JIPMER Academic Centre, Jawaharlal Institute of Postgraduate  Medical Education and Research (JIPMER), who went on write a paper that was published in the Education in Medicine Journal, 2016, that spelt it out starkly: Urgent need to train students and teachers in first-aid and CPR. 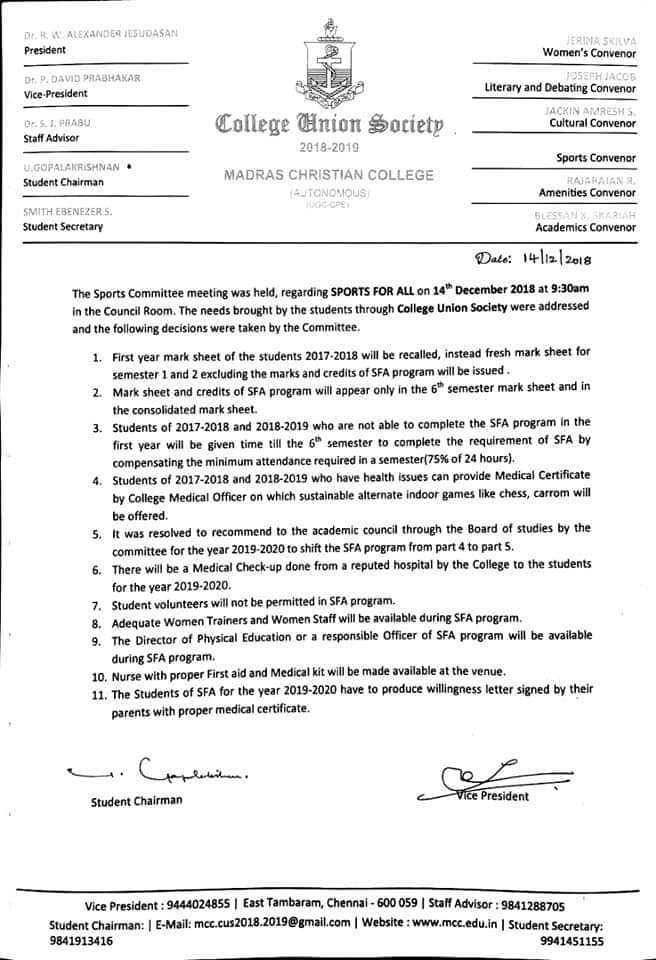 -90 per cent of the people who suffer a cardiac arrest die before they get to a hospital.

-The administration of CPR by even a bystander can increase the survival chances thrice over (3x).

-Every minute that a person who's had a heart attack doesn't get CPR, his survival chances drop by 7 per cent.

-A decade ago, it was made mandatory for all planes and places of public assembly to have trained medical personnel with access to a defibrillator. Not for educational institutions though.

The JIPMER professor's paper says in no uncertain terms that the impact of CPR training is unquantifiably large, "First Aid and CPR training is becoming more common in non-medical settings, including the community, workplace, and schools which was once often associated with medical personnel and health care professionals. Now it is the need of the hour to examine the importance of including first aid and CPR knowledge and skills in the teacher education curriculum and even in the school curriculum from the perspective of teachers including physical education teachers and students," he says in the research paper.

It is, therefore, frighteningly clear that equipment that costs a fraction of what is spent on lavish programmes, garish buildings and several other things is not available. "Commercial defibrillators are available for anywhere between Rs 1-1.5 lakh and it would be absolutely useful for any institution where there is a large body of people. It is undisputed that having a trained medical person with a defibrillator around can reduce the loss of life due to cardiac arrest of any kind," said Rajan K, a cardiologist who formerly worked with the government, "All the ambulances mandatorily have one and even a small block-level PHC has one in this day and age."

While policy on this front has been mooted, especially in light of a Lybrate study recently that said that 98 per cent of Indians had no idea about how to perform CPR, one can only wonder if it will come in time to stop another student like Mahima paying the price.