These B'luru teens just created a robot that can carry notes from class to class. But, get this, it's apparently to 'save time' for their teachers!

Grade 10 students Vikram Mishra and Gaurang Bharti, invented Autonomous Transport Vehicle (ATV) for their teachers so that they don't have to waste time transferring notes to other faculty members

Simplifying matters, teachers need not walk out in between sessions to hand over notes to other staff members or students sitting in a different class thanks to this autonomous vehicle designed by two Bengaluru-based school students. Vikram Mishra and Gaurang Bharti, two class X students, designed this Autonomous Transporting Vehicle as part of their school project at Oakridge International School. This vehicle not only caught the attention of their teachers, but also the attention of Dr A S Kiran Kumar, Chairman, Indian Space Research Organisations (ISRO), who had lauded their efforts in one of the events, Space Camp, that they participated in.

It took them two weeks to just come with a code to get their vehicle functioning.There were plenty of options on the internet. We did not want to copy from there. We began everything from scratch

The brain of the autonomous vehicle mainly consists of an Arduino Uno which is Bluetooth-enabled. The vehicle communicates with the user through a mobile app (currently only supporting Android) that was designed by the duo. The app is connected to the vehicle via Bluetooth and all the user has to do is select their current location and the destination, as well as the level of priority, which will decide the speed of the vehicle. It is equipped with six ultrasonic sensors on board which helps it make decisions during the journey. 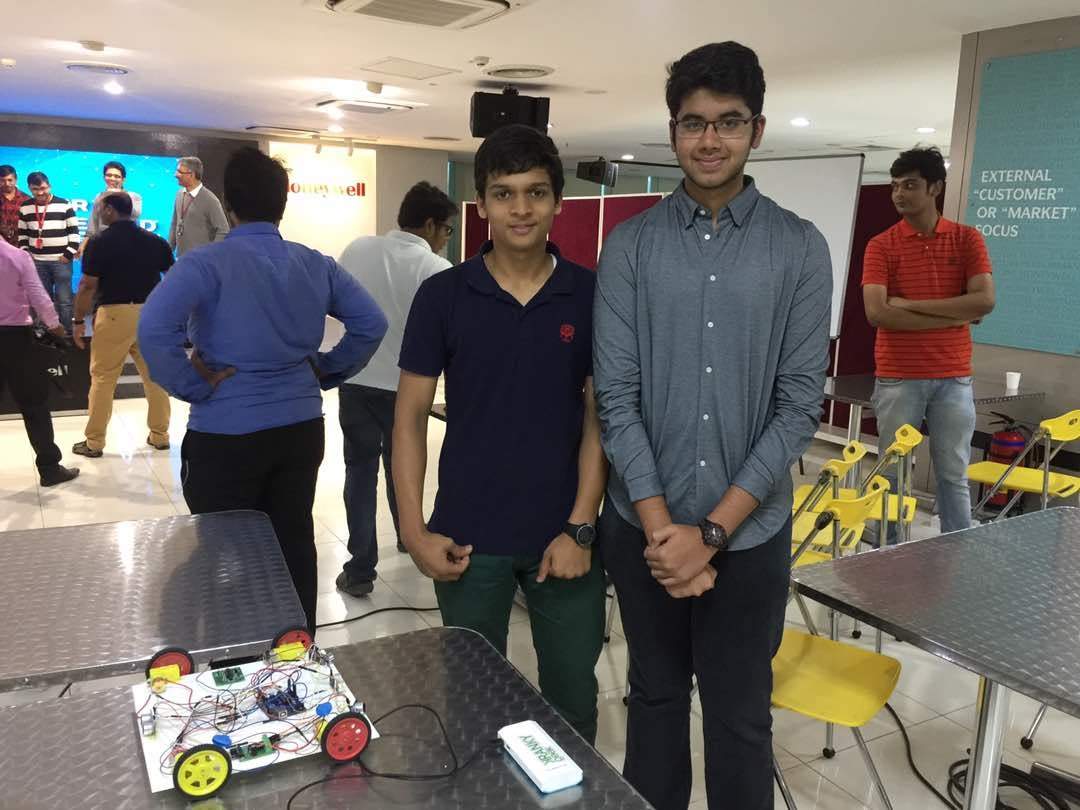 Bro code: Vikram Mishra and Gaurang Bharti have always been fascinated with technology

“Consider this. A teacher in the staff room is preparing for her next class just when she realises that she has forgotten to return the books of a few students that she had borrowed for reference. Now, she’s in a fix. If she goes to the students’ class, she will be delayed for her next class. In such a situation, she can use the Autonomous Transporting Vehicle. All she will need to do is place the books in the container, and programme the ATV to go to the particular class and deliver the books. The ATV could save the time of the teacher, and perhaps, even the student,” explains Saurang Bharti.

The students have the basic prototype of the vehicle ready. Their idea was also chosen at the Honeywell Hackathon this year, through which they were mentored and hence were able to develop an improvised version of the ATV. “When they asked us to work on the project, initially, we first thought about a vehicle that could extinguish fire. Then we realised that it would only be put to use on a few occasions. Hence, this idea,” says Bharti.

The duo are designing their vehicle in such a way that it will be operated using mobile phones and tablets to begin with. Mishra explains that it took them two weeks to just write the code to get their vehicle functioning. “There were plenty of options on the internet, but we did not want to copy someone else’s code. We began from scratch,” he says, adding, “We are both fascinated with technology and cars. After coding, we designed a digital 3D model with the help of an appropriate software before experimenting with other material.” Mishra says that so far, the uses of the vehicle is restricted to land only. “We can use it to transport files, documents or transport small items within a school or office space,” he concludes.