Rewinding on R-Day: What every youngster who wants to join the Armed Forces can learn from this Kargil vet

On Republic Day, 22 years later, Lt Col Peter still speaks about his time in the Army and his experiences in Kargil war like it was yesterday, recollecting even the smallest details accurately

Lt Col Sada Peter is a man who has seen it all. He is a decorated war veteran who fought in Kargil in that border-defining battle in 1999. The Line of Control (LoC) and forays in Pakistan occupied Kashmir (PoK) may be terms that we have read in the news, but for thousands of soldiers, it was a way of life — the only one that they had known. And for some, it was where it all began. And ended.

On Republic Day, 22 years later, Lt Col Peter still speaks about his time in the Army and his experiences in war like it was yesterday, recollecting even the smallest details accurately.

What do you remember most vividly from the Kargil War? I do understand that it was 22 years ago, but there are some memories that just stay with you.

There are many missions that are fresh in my mind but the most memorable mission is when we fought for Jubar Hill. The area was at an altitude of 13,000 feet and after having been held by our troops, it was taken over by Pakistan. Our job was to evict them from Jubar. We were planning a big artillery attack on Jubar, a part of which also involved rocket fire. My job was made especially hard due to the time constraints — I had to lead my men from one sector of Kargil to another in less than 20 hours through the night.

From our vantage point, a place called Hambotingla, we could engage in Jubar. We released almost 296 rockets in about 45-50 minutes. Having to reload the rockets at such a high altitude did not make things easy. It was a very tall order but because of the morale of the men, the passion to fight and the will to contribute to our nation, we managed to succeed. That was one of the biggest missions I ever undertook. I also received the Army Commendation for that action because it was a deadly mission that caused immense damage to the enemy troops.

What was the one thing that kept running through your mind during that offensive?

There is no time to speculate, but there was only one thing on my mind -- I did not want to let my men down. I was commanding 120 brave soldiers and I didn't want them to, at any point in time, feel less confident or scared. Though I'm a human being too and I was scared for my life. I was not very old, I was just about 32 then. My first son was four years old, the second boy was just six months old and my wife was back home. I had a lot of responsibilities at home too. So the fear of death was there. But more than that was the apprehension that I should not be a failure. Was there ever a moment when you thought 'This is it'?

I was given a task where I had to do some technical work that is usually given to artillery experts. I was put up on a hill with some protection and I was doing this job. The enemy got to know that there was some officer who was doing some activity and mapping their location so they started opening fire on us. We were out in the open just amongst rocks. As an artillery officer, you know that you've been targeted because their (the enemy's) strategy will be to bracket you, that is, open fire in front of you and behind you in order to locate your position. A couple of rounds fell very close to us. One fell about 100 yards behind me and in front of me, so I was bracketed. Now the next move of his would be to bring the artillery bomb on top of or very near to us about 30 or 40 yards and that is enough to kill all of us because we were out in the open.

When an artillery shell breaks, it will just rip through you because the fragments are all red hot, molten metal. There is no way you can protect yourself. At this point, we were trying to very bravely hide between rocks and pray like hell. We were waiting. The next few moments, I felt a very miserable, dull feeling sweep over me. I could see the fear of death written on the face of my radio operator and my other three guys who were protecting me. I was very bravely trying not to show that fear in my eyes because they were looking at me. I just bowed down in my heart, I said, 'God, if this is going to happen, let it happen instantly.' But the guy missed and the third round, instead of coming and landing on us, went a further 100 yards away. And then after two or three rounds, he could not get a fix on us. He stopped the bombing. But those 10-12 minutes were very intense. I thought that the game was over.

Let's dial it back a bit. How did you feel when you were asked to undertake the mission? Kargil was possibly the most dangerous place to be if you were in the defence corps in 1999.
My boss just called me one evening and told me, “Peter, there's nobody else who at this point in time is better than you, I’m trusting you to command this detachment, take these men from Delhi and engage in battle.” After this order, I had a window of about 24 to 36 hours to move out of Delhi. So there was a lot of preparation, I had to choose the best ammunition, equipment, maintenance men and so on. There were so many things going on in my mind that talking to my parents and my wife was the last thing on my mind. In those days,  we did not have WhatsApp or Telegram or even a mobile. I had to go to the STD booth to make a telephone call. And I was thinking that this was a great blessing to be entrusted with such a great responsibility and to get to serve the country in battle.

What made you want to become a soldier? Is it something that you were born with or just a desire that you picked up along the way?

My father was an Air Force officer. So, as a child, I grew up looking up to him. He was a very stylish man for his time. The way he would speak on the telephone, the way he would smoke his cigar, the way he would drive his jeep, or the way he would talk to his juniors and the respect he commanded from them made a lasting impression on me. The uniform and the suits he and his friends wore, blue flight overalls, when they would go for a game or sit in the evening and talk — these were the impressions that stuck in my impressionable mind. I did not want to settle for anything else, because everything else looked very, very funny. I saw how well behaved, stylish and expressive service officers were. So I decided that I would be one and I wanted to become an Air Force pilot, but somehow, God gave me both. I became an army officer but I got to fly too. So that was a double whammy for me. 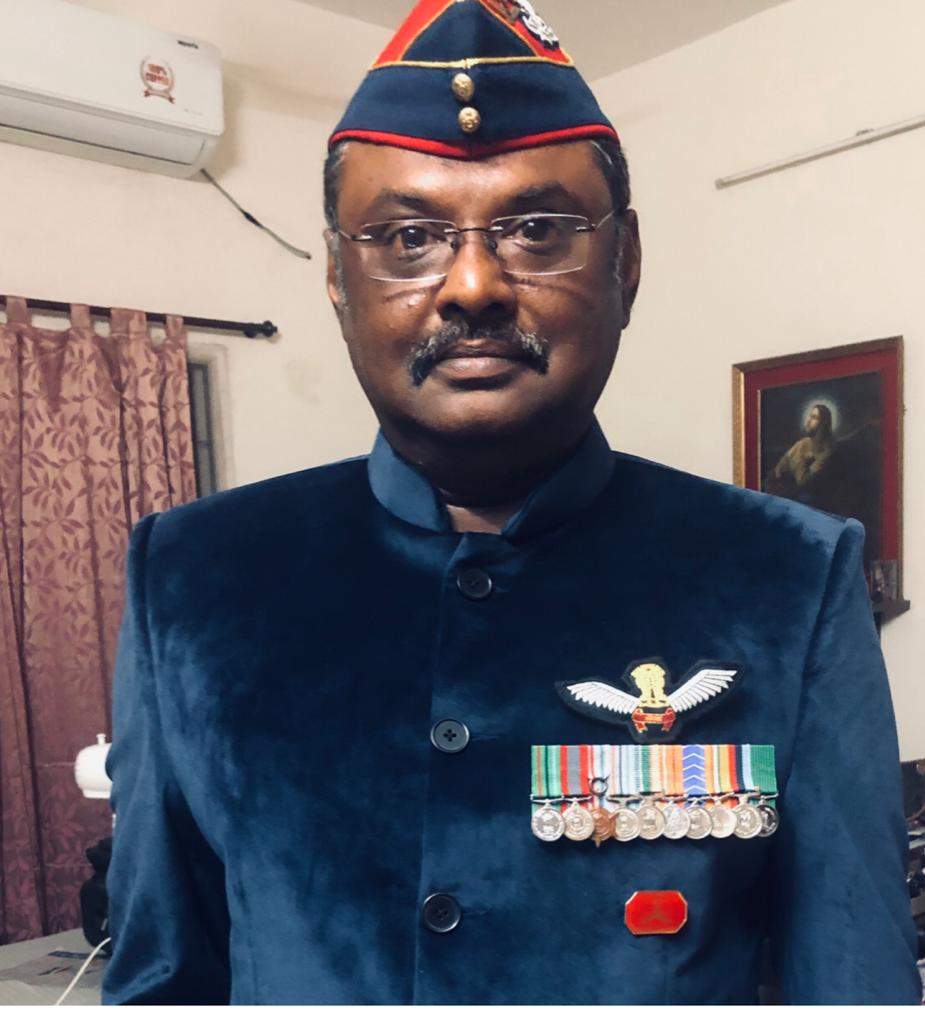 In what way did the Army and fighting in the war change you as a person?
I was a Literature student and have studied in institutes all over India. But the kind of exposure and the leadership that I got from the army is unmatched to what any school would have been able to teach me and the field experiences that I have picked up in the two decades I served along with what my father inculcated in me as a young child because he himself was an officer. He gave me the love for reading. Being brought up by a Fauji and then having been a Fauji really has shaped me and so, if you tell me to retrace my life and you rewind my life and tell me to take an option, I will still do it the same way.

What is your favourite memory about the time you served?
I’d have to say flying. Flying is something which is not natural. The moment you have a powerful machine and you're soaring up in the air, you have such a feeling of awe because the world becomes smaller, the buildings smaller and you feel like you're absolutely free and floating in the view as you're in. I have this beautiful memory of flying one night. I was practising flying that day and it was a nearly full moon day. At 9000 feet, the moon looked as beautiful as ever and its light shone on the Brahmaputra like a column of quicksilver gliding through the earth.

What are some things that you wish civilians understood better about people in the armed forces?
It's very sad that when some civilians see a soldier, especially the corporate world, they just think that he just knows how to use weapons and he's got no brains. Some people also think that soldiers have good salaries and spend their time in leisure. The sensitivity or the respect that a soldier needs to be given is gone from our society. People must understand that even to play a game of chess, one needs mental acuity, so imagine if you have to strategise for war and fight an actual war. All the sacrifices that are made by a soldier, the time he lives away from his family, the ice-cold mountains where he is standing guard and the kind of suffering and loneliness he goes through, are often forgotten.

After which, when he returns, he is treated with disrespect, no good jobs and complacent employers. I wish that attitude changes in a particular section of civilians. People, though, are generally respectful of soldiers and I am very grateful for that.

What is something that you wish to tell the young soldiers of today?
I just want to tell them to carry the baton. Do your bit. Play your innings well. Have a swagger, have a little arrogance, and stand a little taller. Make your time count. Keep the glory of the Armed Forces and uphold the dignity of the motherland.