Mitti Cafe has plans of expanding to Chenna, Mumbai and Hyderabad. We find out how they have been dealing with the Coronavirus pandemic and more

Karnataka's Mitti Cafe turned four this year. What is so different about them? Mitti Cafe is completely run and managed by persons with various kinds of disabilities and the aim is to empower people with both mental and physical disabilities with jobs. The brainchild of 26-year-old Alina Alam, the cafe has a centralised in Bengaluru, which can churn out 5000 meals per day — all cooked and served by the differently-abled. The very first branch was set up at Deshpande foundation in the BVB College of Engineering and Technology campus in August 2017, in Karnataka's Hubballi. Alina was 23 and a student at Azim Premji University when she started the cafe.

There are a total of 12 Mitti Cafe branches, set up inside various office campuses such as Infosys and Wipro across Karnataka that remained shut during the pandemic. However, the Mitti Cafe staff did not stop at adversity. During the COVID-19 lockdown, their employees with disabilities have cooked and served 6,70,000 meals for daily wage workers and the homeless impacting at least 3,500 families under their new initiative, Karuna Meals. "Our employees who, once were dependent on someone else for everything, are now lending their hands to the less privileged. Through this initiative, they provided low-cost, quality nutrition to homeless and daily wage workers, out of a mobile cafe. We partnered with various NGOs and distributors, who helped us reach a larger audience in Sunderbans and Kolkata after the Amphan cyclone hit. This initiative was conceptualised by one of our team members and we could serve over 13 lakh meals over the months of lockdown," says Alina. 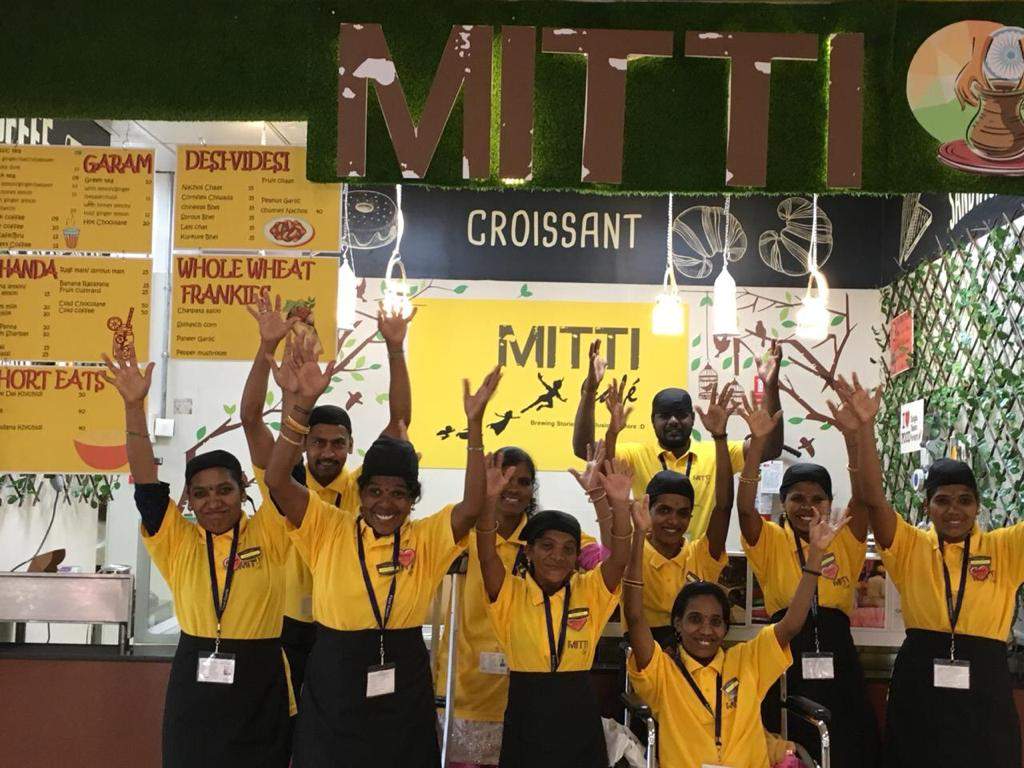 She adds that Mitti Cafe's objective has always been to empower persons with disabilities and provide them with economic independence. "It is the disability in our perception that hinders us from looking at their abilities and this needs to change," she says.

During the pandemic and then the subsequent lockdown when their cafes were shut down, the team launched an online crowdfunding campaign on Milaap to support each of their employees. They also started a gifting vertical during Diwali this year where the members create gift hampers for every occasion and the money earned through that is used for their welfare. The funding for the Karuna Meals initiative was taken care of as Mitti Cafe was one of the winners of the Bumble Grant Program launched in March last year, to support women-led small businesses. "The grant helped us with the Karuna Meals initiative completely and we are extremely grateful for that," adds Alina.

Venturing out of just the corporate spaces, Mitti has also set up cafes in public spaces in Koramangala, Jaynagar and another in Whitefield. "Two of these public cafes are already operational and we are in the process of setting up cloud kitchens. We have listed ourselves on Swiggy, Zomato and other online platforms. We wanted to reach a larger audience and not restrict ourselves just to the corporate set up," shares Alina.

Mitti Cafe currently has plans of expanding to Chennai, Mumbai and Hyderabad. They also provide hands-on training inside the cafe, following which the persons with disabilities can work at the cafe or they also place them outside with various organisations that Mitti works with.