Check out Kerala-based Farmer's Share, a farm where children are taught to live, learn and work for themselves

Set up by Ambrose Kooliyath, the 10-acre land allows adults and young children how to learn and practise every natural skill to support themselves

“Let them touch the mud with their bare hands, let them play in it and learn from it,” says Ambrose Kooliyath. He tells me about how he has home-schooled his own children and other children who have visited his 10-acre farm, Farmer’s Share, over the past few years. This father of two has leased the land that is in Thrissur from a close friend for a period of twenty years. And over the past three years, he has made it a haven of sorts for anyone who enjoys reaping the fruits of their own labour.

Ambrose himself is a 12th standard passout who swears that he learnt more from the earth than he did from any classroom. A mason by profession, he started working at the age of 15. After many years as part of labour unions, a brief stint running a restaurant in Kochi and over 30 years of experience in farming, he was brimming with ideas on how education and employment could be a more humane space rather than the rat race that it is.

While working with a movement called Swasraya Vypeen in Kochi, Ambrose was introduced to the concept of self-reliant labour. Following closely on the words of Gandhi, the local movement was fuelled by the concept of each village making and using local products alone. When he set up Farmer’s Share, he introduced the same ideas, including khadi production, farming, pottery and stitching. He explains, “Even a small knife that we use is made by a big company. People who specialise in such trades and crafts at the local level are left orphaned. Those who have been doing such work for centuries are not respected and their work is no longer valued. And most people have stopped doing the work altogether because they are worried about how they will survive. The only thing that has any value is money. Gandhi himself said that technology and development can help the masses only if it supports the community, without that, who is it for?” 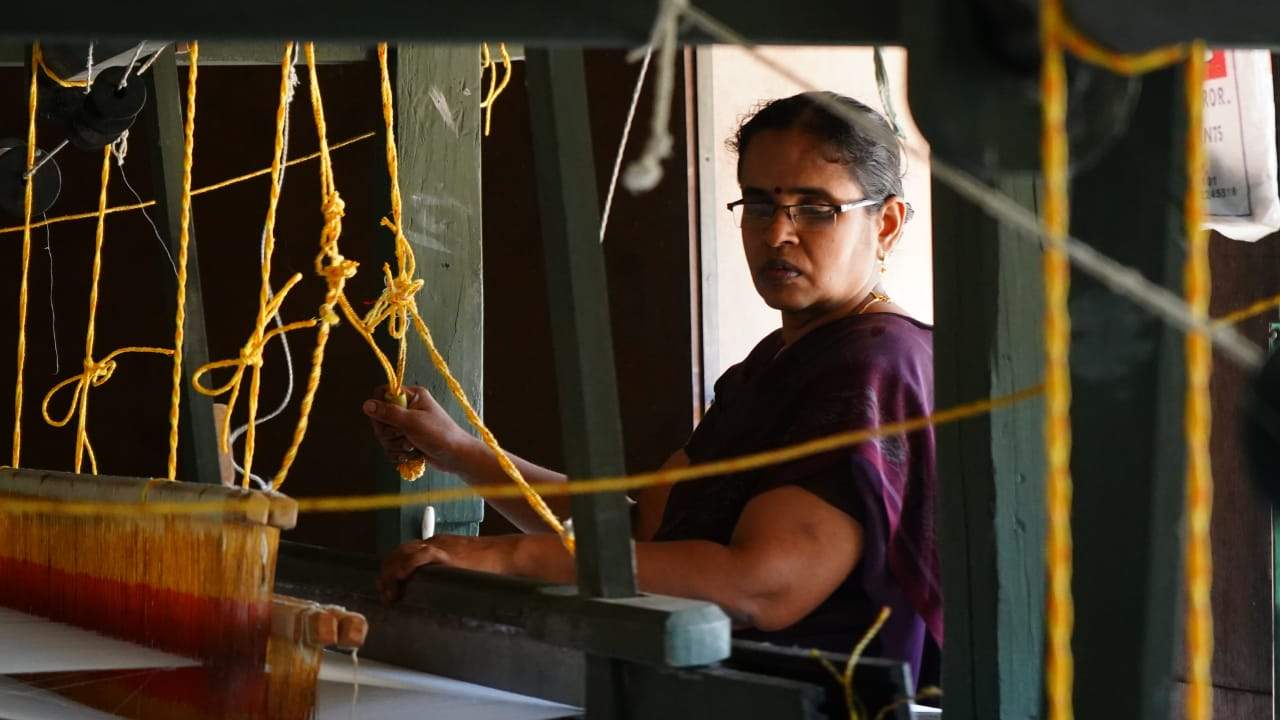 KHADI WAY: The yarn used at Farmer's Share is sourced from the Khadi network

Although now only four children continue to visit them following the pandemic, Farmer’s Share used to open its doors for school students from many parts of the state. Here, they are taught everything from agriculture to pottery to making their own clothes. The children are of various ages, from older teenagers to college-going students. “We teach them practical knowledge,” says Ambrose, “They work with us in the mill, in the farms;  we give them a block of clay and ask them to make what they wish. The real joy is in watching them make what they want with it. Of course, not every child could be a potter, but we let them find out for themselves. All children have a light in them. You cannot call one smarter than the other. You might be a writer and I, a farmer. The fact that we live in a world where one is considered better or worse than the other must stop.”

He continues,  “Here, the aim is to teach them how to live, it’s not with the sole purpose of learning how to make money. When you do this, children only search for jobs that will keep them safe and they never go after what they truly want to do. When you look at it like that, you need a certificate and it can make or break you. It determines your worth and what salary you get. Children cannot learn in this fear.” When they teach these young children to live, in the rawest sense of the word, Ambrose and his 12 peers who help him take care of the land, aim to create a community of people who are free of fear. Farmer’s Share is a small island of its own where they work hard to live a complete life. And they hope to spread the message to all those who wish to do the same.