This specially-abled cartoonist from Bidar creates cartoons that are brilliantly satirical. Check it out!

Sharad Kulkarni might be wheelchair-bound but his imagination definitely isn't. We talk to him to trace his challenging journey and his cartoons that have gone viral recently

As kids, picking up the newspaper just to read those simple cartoons that often drove the point home in just a few words was almost mandatory. Probably, these wise cartoons are the reason we still pick up the newspaper today. Let's meet one of the brains behind such cartoons — Sharad Kulkarni, a specially-abled artist from Bidar whose cartoons are extraordinary, meaningful and relevant to the current times. Despite being wheelchair-bound since childhood, he never gave up hope. He says, "I was infected with polio when I was just a year old and from then onwards, I haven't been able to walk independently."

Sharad's journey has been no less than a roller coaster ride. After passing class X with a distinction, he chose to pursue a Diploma in Art course from Sri Veerabhadreshwara Fine Arts College. After completing it in 2001, he applied for the position of an Arts teacher in schools. He even personally approached schools and colleges to apply but many of them turned him down citing the reason that he wouldn't be able to do justice to the job as he is wheelchair-bound. He shares emotionally, "They should have recognised my talent instead of looking at my disability. However, I did not remain idle for long. In 2005, I went on to pursue a Graphic Design course from Arena Animation in Hyderabad." 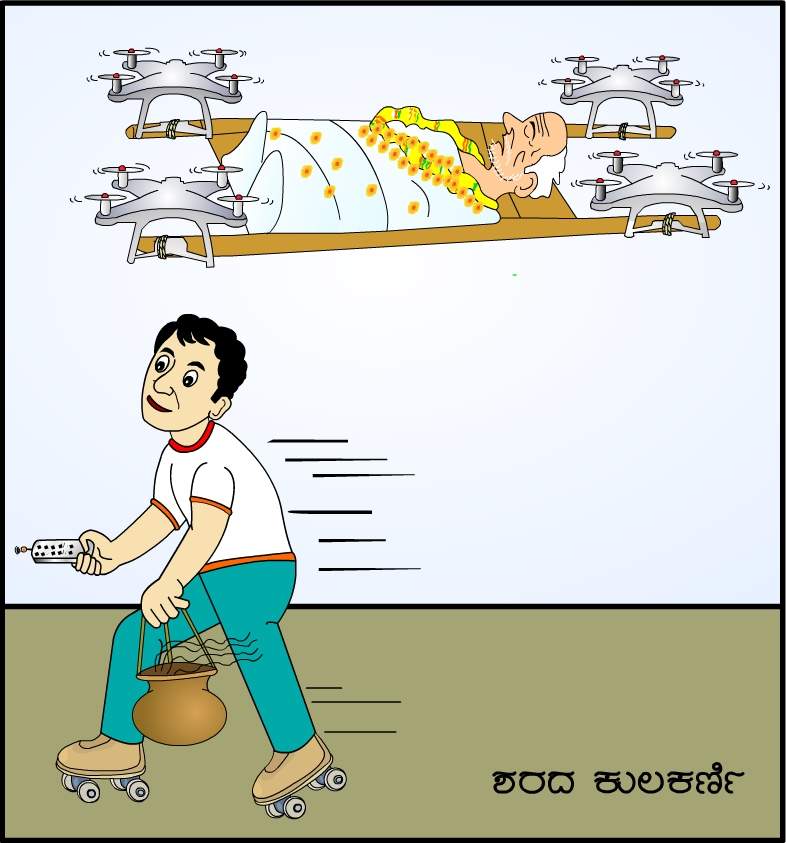 The drone cartoon drawn by Sharad that went viral

After spending a good two years learning the relevant skills, Sharad bagged a job in a Hyderabad-based company that designs e-books. And it was here that, for the first time, Sharad felt his hard work had finally paid off. "I worked as a Graphic Designer and even drew illustrations for them. But during the 2011 recession, I lost my job. With not much work left to do in Hyderabad, I returned to Bidar." says this cartoonist who draws inspiration from his own day-to-day experiences.

Narrating what led him to switch to cartoons, Sharad explains, "Drawing cartoons was not new for me. Even when I was studying and working, I would draw cartoons. In 2012, I got enough time to think about my career. I chose to draw cartoons and the very first one I drew went viral. Do you remember the Coalgate scam that happened during former PM Manmohan Singh's tenure? My cartoon depicted the former PM wearing a gold medal for his involvement in the scam, DMK leader A Raja wearing a silver medal for his alleged involvement in the 2G scam and former president of the Indian Olympic Association Suresh Kalmadi wearing a bronze medal for his involvement in the 2010 Commonwealth Games scam. My cartoons were appreciated and daily and weekly newspapers, including magazines across all languages started publishing them. There was no looking back from there." One of Sharad's cartoons was of a man whose eyes were closed with a piece of cloth, hands locked, mind placed inside a cage and mouth locked in a jail depicts restricting Freedom of Expression

Sharad uses Adobe Flash to draw his cartoons. But before he proceeds drawing them on his laptop, he prefers visualising and drawing them on paper first. "This gives me a clearer picture of the message I want to convey. I draw at least five to six cartoons every day. Since I move myself around with my hands, it becomes difficult to apply pressure on my hand while drawing. I am paid on the basis of whether my cartoon gets published or not. Currently, I am a freelance cartoonist but I want to be a full-time one so that I can get a decent salary to lead a comfortable life," he says.

When we ask Sharad about his cartoons that have gone viral recently, he says, "There was a severe drought in Karnataka and our neighbouring states. It led to water wars among people. One of my cartoons depicted a woman carrying a pot full of water and another woman threatening her at knifepoint for the pot of water. Another cartoon showcased the impact of technology. As we are surrounded by drones, we never know when the day will come when a dead person's body is lifted by four drones instead of four people. This cartoon showed the same situation — a boy operating drones to transport a body to the cemetery."