Hajabba took up the responsibility of shaping children's futures by building a school in Harekala. We visit this school and chat with the Padma Shri awardee to understand what drives him

When I was in the vicinity of Harekala and asked for directions to this village, which is located 22 kilometres from Mangaluru, I was told, “We know you have come to meet Hajabba and visit his school. His work has helped the village gain national and international recognition.” I am told that this is the standard reply given to everyone who asks for the way. Indeed, in the past few years, this village has gained prominence because of one man alone — Hajabba — and his school, Government Higher Primary School. On January 27, 2020, the whole nation sat up and took notice of humble Hajabba when he received the prestigious Padma Shri from the President of India Ram Nath Kovind. And that’s the first thing we wanted to know when we met this 68-year-old at his school -  how did he feel at that moment. "I never dreamt of being honoured by the President of India. Today, I feel happy because my intentions were and have always been good. It was simple and clear to me that I have to sell oranges, collect money, ask for the government's help and build a school in our village," he says with a smile.

So, what was the purpose that moved this man so much that he wanted to build a school when he did not have a place he could call home? Narrating his story, Hajabba says, "When I was selling oranges in the Mangaluru market, a couple approached me and tried to communicate in Kannada. I have never been to school and I could barely speak the language myself, but I could communicate in the local languages of Tulu and Beary. That day I felt bad as I could not be of any help to them and wondered about starting a school, but had no clue how to go about accomplishing this. As I used to work for Twaha Juma Masjid in Newpadpu, Mangaluru, I asked the masjid committee members if we could start a school. They agreed and the affluent from the community donated money. In 1994, we started Ravalatul Ulama Madrasa in Newpadupu and several children from the Muslim community joined our madrasa. Classes went on successfully and my work was recognised. I was appointed as the treasurer of the Twaha Juma Masjid Committee." 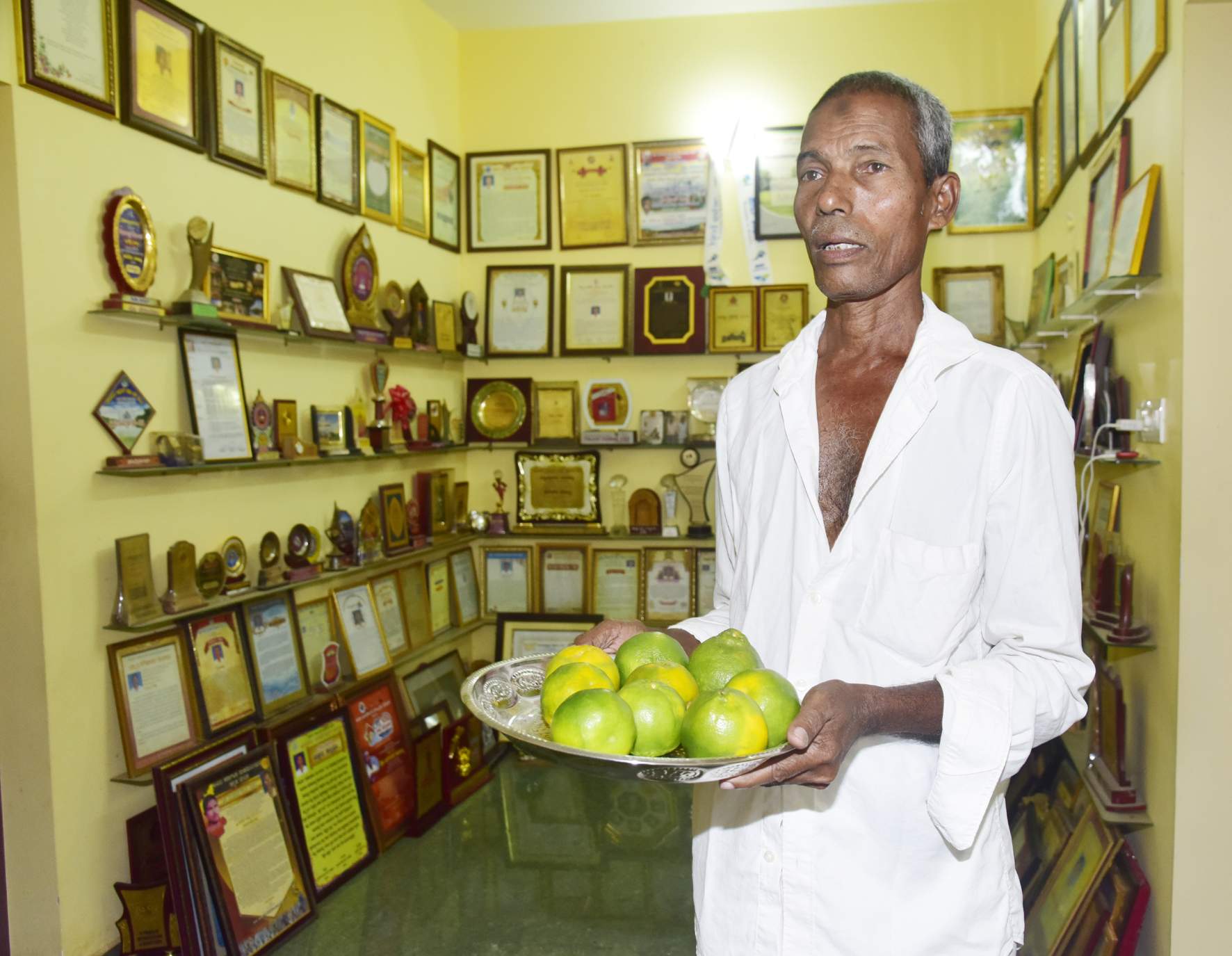 The next big step
Hajabba did not stop with this because he was thinking of girls who would want to study beyond class V and children from other communities who wished to go to school too. "The idea of starting a Kannada-medium school was always on my mind. When I approached the government officials to ask for permission and start the same in the madrasa itself, the officials informed me that Arabic is the only medium of instruction in madrasas. So, I decided to save money and also ask for people's help to buy some land and build another school there," explains Hajabba, indicating the building we were seated in.

While approaching government officials through social media and getting their attention to solve issues is easy now, it was not the same for Hajabba back in the 90s. Whenever he would visit the government offices, they would insult him, rudely tell him that the concerned official was not present or simply ignore him. They would even give him 50 paise or 1 rupee coins and ask him to leave - almost like he was a beggar. Anyone else would have felt insulted enough to turn away from the cause forever, but not Hajabba. He was clear about what he wanted for his community. He says, "My intention was to build a school and I did not step back. I don't exactly remember the amount I had saved but in 1999, I bought a small 40 square feet land in Newpadpu. Again, with the help of philanthropists, I bought another one-acre land in the same place. After running from pillar to post, it was in the year 2000 that the Education Department of the Government of Karnataka sanctioned permission to build this school." 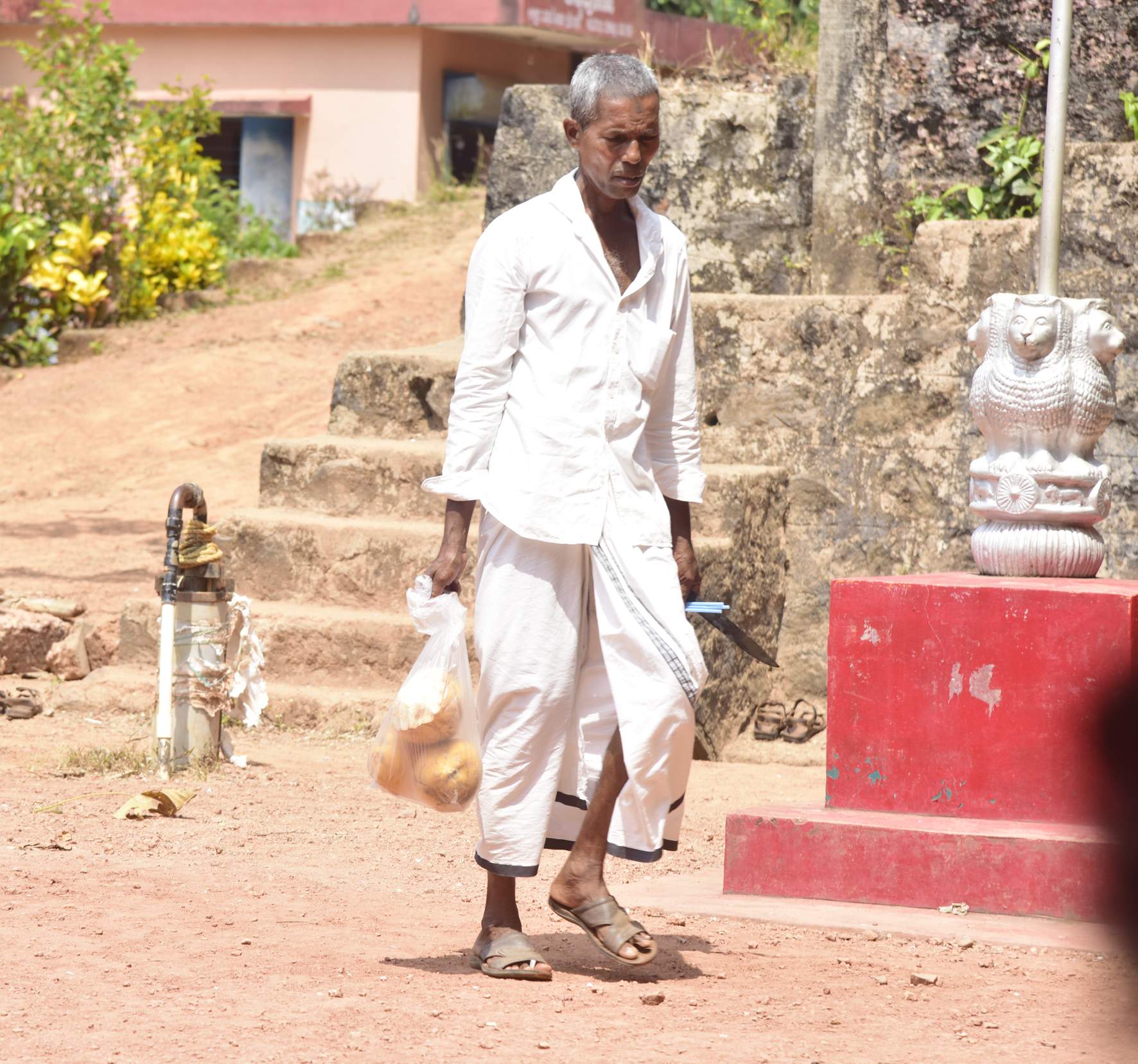 Banding together for a cause
During this difficult phase, Hajabba also came across a few humble government officials who were ready to help him. He points towards a wall on the premises on which the name K Anand, the then Block Education Officer of Newpadpu, is written. "I give thanks to this man who hand-held me through this noble initiative. Though my journey of building this school was challenging, there were a few kindhearted people I came across who still call me to find out if everything is fine at the school and ask if I need help. Not just money, people even helped me with heavy construction machines and cement required to build the school. Since the land looked like a mountain, we had to first level it to build the school. Around six bulldozers were put to work and within a few months, we built a school with eight classrooms and two toilets. On June 9, 2001, the Government Higher Primary School was inaugurated amidst huge celebrations. My eyes were filled with tears of joy because my dream had finally come true. As days went on, local politicians and wealthy individuals came forward to donate benches, desks and other necessary materials for this school. Today, we have 91 kids studying in this school building," says the man who has earned the title 'Akshara Santa' (letter saint) through his philanthropic work.

Like every other government school, the Education Department asked Hajabba to form a School Development and Monitoring Committee (SDMC) if they needed funds from the Sarva Shiksha Abhiyan scheme for school development. As per this scheme, the government allocates funds to every government school to develop infrastructure or to purchase necessary material for the school. Hajabba never dreamt of becoming the Vice-Chairman of an SDMC. He says, "The then headmistress, Veena GH, suggested my name for the post. A bank account was created in my name to receive the funds. Whatever money we received from the government was spent on the development of the school. At the same time, we even started a computer lab for our children here. Today, we have four computers for children to study the basics and they make use of it whenever necessary." 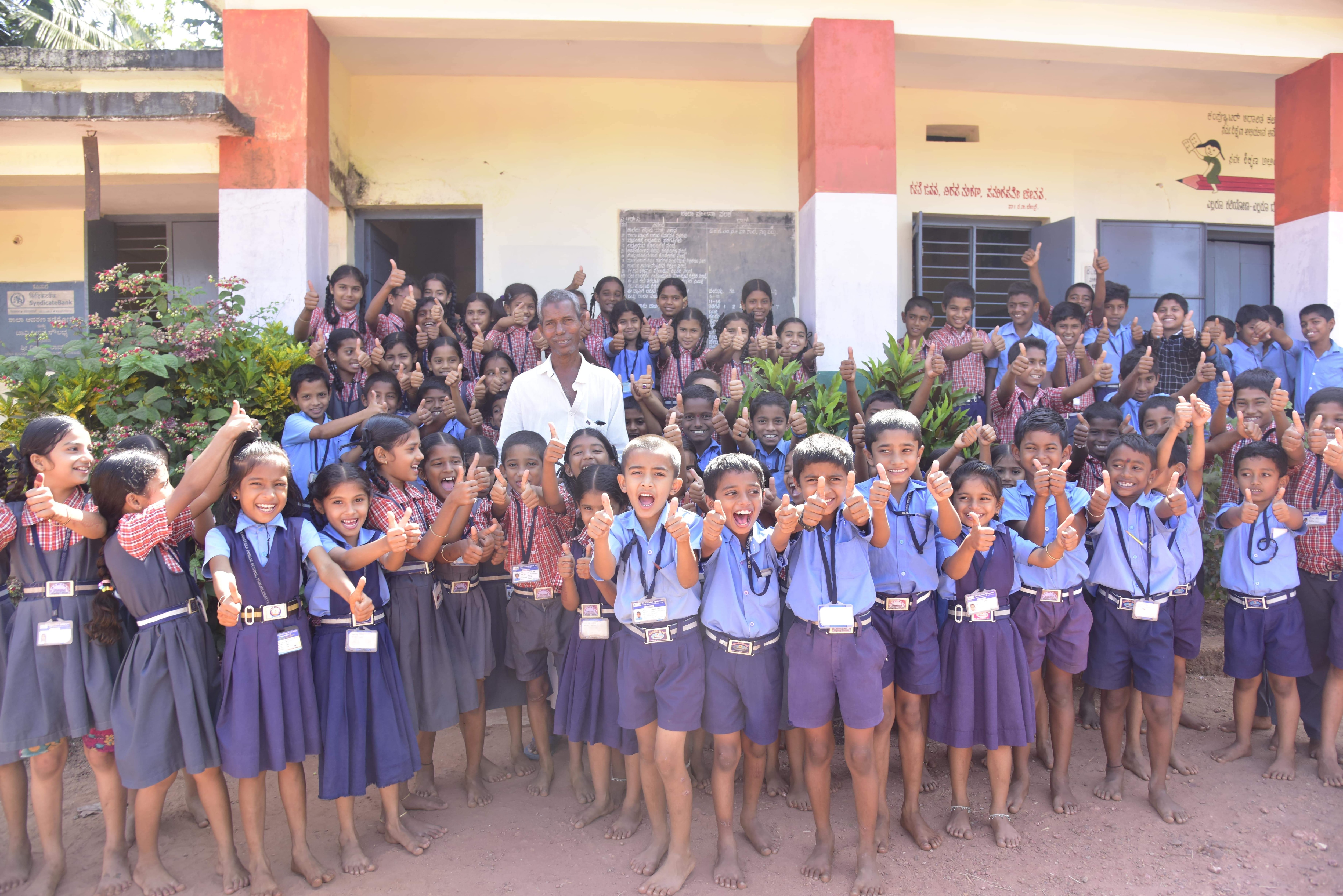 In no hurry to stop
Hajabba's dream of starting the school had come true but his desire to do more did not end. After a few months, he wanted a high school to be built. As there was enough space on the school premises and the government officials knew him by now, he was able to get the building sanctioned. In 2003, Hajabba started saving money again by selling oranges and collecting donations from people. "The construction began in 2010 and it was finally completed in 2012. Like all the other schools, this school has a library and more than six classrooms where children from classes VIII to X study. The classrooms are named after famous personalities including Rani Abbakka, Kalpana Chawla, Swami Vivekananda and so on. The idea is to inspire children to achieve more by reading these names and remembering their stories. Around 73 children study here and the pass percentage of this school during class X exams has always been more than 90%. In fact, last year, the pass percentage was 92%. Rahin Tousia from our school secured the third place at the taluk-level and was honoured by the District Commissioner of Dakshina Kannada," boasts a happy Hajabba.

When we ask Hajabba what his plans are for the future, he says, "I have asked a few people to donate money to build a college building for PUC I and PUC II. Right now, I am trying to estimate the amount of money I need to complete this project. And if I am able to get funds on time, the construction of the college building will begin soon." Before we could leave the school, the simple, tall and ordinary-looking man with extraordinary grit introduced us to teachers and children and humbly showed us the wall on which I found the name of every person who has donated money towards the initiative. Though he was the brains behind this initiative, you will not find his name on any of these walls or in the school premises because his name has been etched in the minds and hearts of every villager of Harekala and every citizen of India. 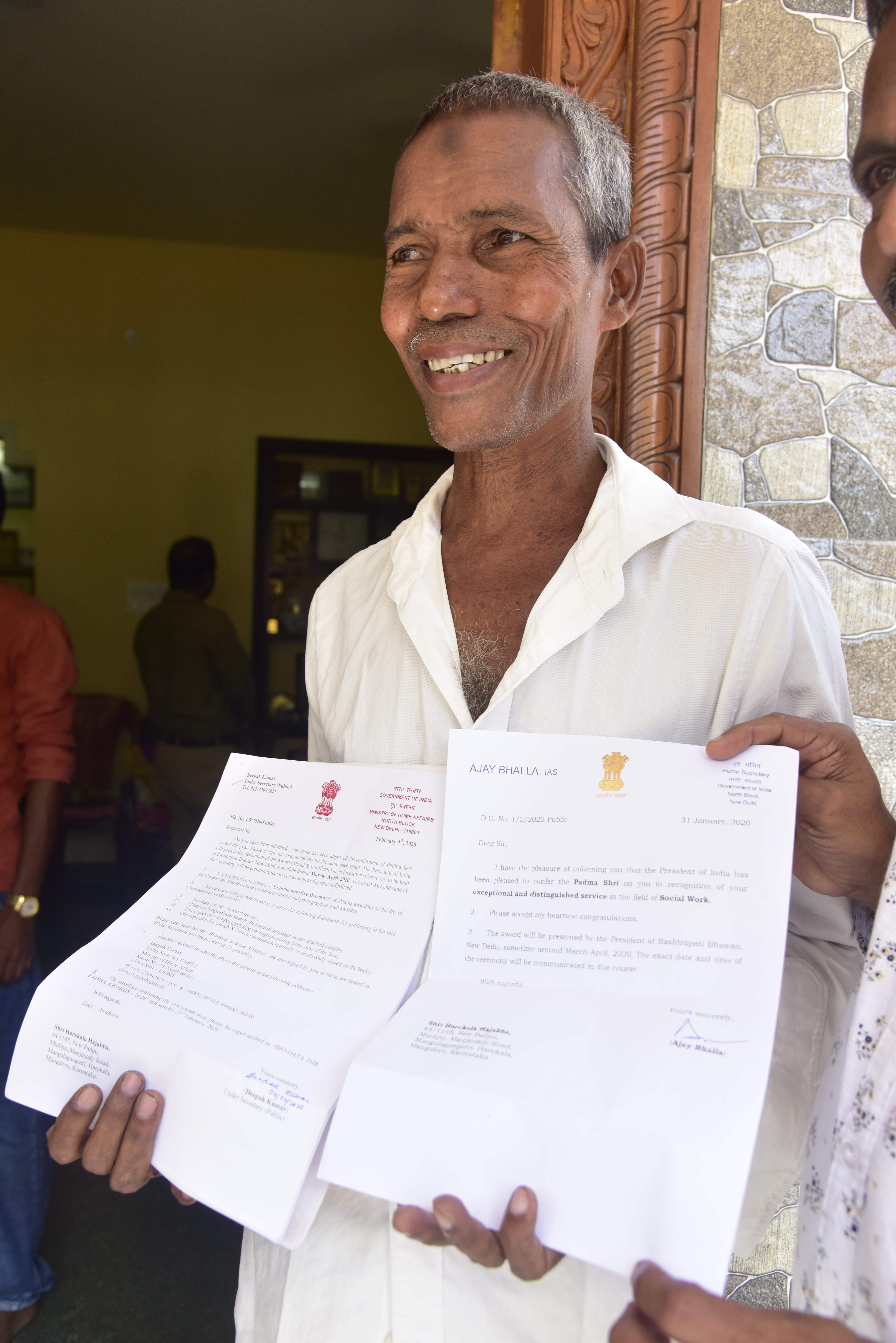 In 2013-14, the Government of Karnataka awarded the Karnataka Rajyotsava Prashasti to Hajabba

In 2004, he learnt to sign official documents in English. His signature consists of two letters, P and H