Born without his hands, Pranav is a painter and a young lad whose exuberance in life can be uplifting, bowled over Kerala CM Pinarayi Vijayan when he met him — and went viral right after

For his 21st birthday, Pranav B Balasubrahmanyam got to meet the Chief Minister of Kerala. Born without both hands, Pranav is a self-taught painter who rose to fame recently when he participated in the entertainment show, Comedy Utsavam. Having completed his BCom from the Government Engineering College in Alathur, he is currently training for PSC.

Last year, during the Kerala floods, Pranav and his family visited a number of camps for disabled people. Since he has had a personal experience with difficult circumstances, he was curious about the experiences of others. Pranav's father, Balasubrahmanyam M says, "His heart ached and we saw it. The sights he saw helped him realise that there were countless people who were suffering much more than he was." 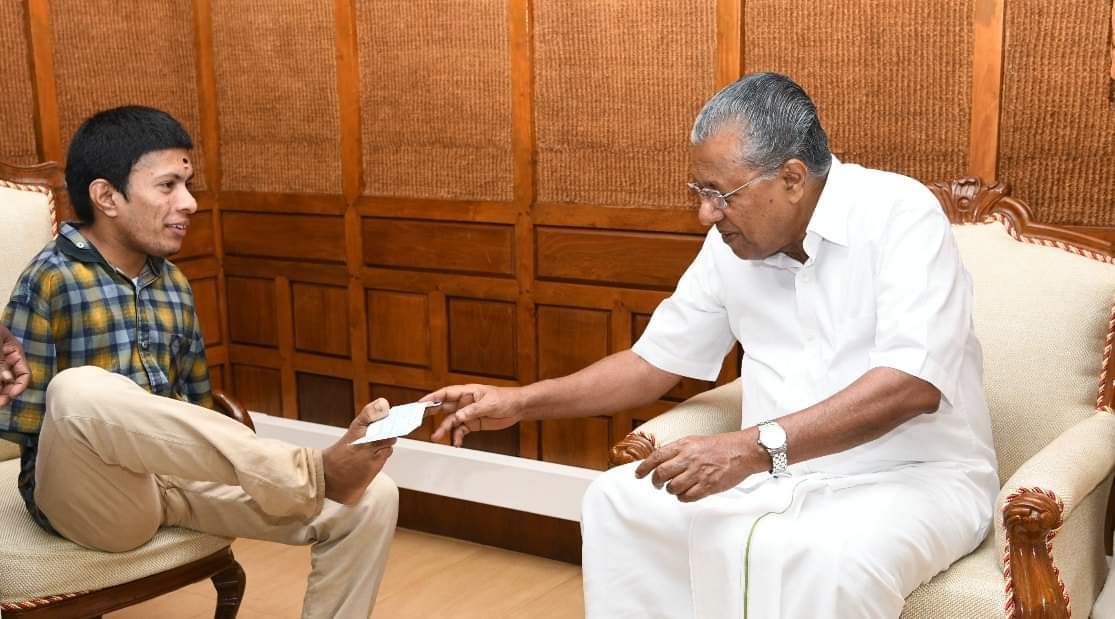 ALL HEART: Pranav handed over his earnings to the Chief Minister

Pranav left the camp saying, 'we are so lucky'. He wanted to do whatever he could to help the people that he had seen and ease their pain. Pranav had learnt to draw watching his brother Praveen who is two years older than him. Balasubrahmanyam says, "When he watched his brother, he also wanted to be equally good at it. In fact, he has always been determined to be able to do whatever other people were doing. We've always stood by him with our full and unwavering support. He has done everything including managing to drive a two-wheeler. He's always been determined to prove himself and he's done it countless times."

He taught himself to draw pictures with his foot and sold them for money. Last year, he donated the total amount he had collected to Minister AK Balan at the Alathur Civil Station. Following the proud moment an excited Pranav announced to his parents, "Next year, I want to meet the Chief Minister himself!"

So determined was Pranav, that word reached the Chief Minister himself. On his birthday, November 12, Pranav not only met Pinarayi Vijayan but he also handed overPranav a cheque of Rs 5,000 to the Chief Minister's Distress Relief Fund (CMDRF) for the damages made by the floods in 2019. He recollects telling the chief minister, "There's no provision for handicapped people like me to secure a license, I want to drive a car! Pinarayi Vijayan replied, 'Just wait, you get that car ready!" For his birthday, he told the chief minister that he wanted a job and he was promised one as soon as his course winds up.