Football brought Vysakh SR back to life. Listen to his own two cents on the magic the game has had over his life and it’s immediately clear: “I have no doubt that it’s the game that kept me going,” he begins. It was at the age of 13 that everything changed for the now 24-year-old Vysakh. During that year, an ecstatic Vysakh was getting into the spirit of the Onam holidays. It was when he was travelling with his cousin to try out for a football tournament when a KSRTC bus crashed into their bike. Vysakh explains, “My cousin who was riding fell off the bike and I got thrust onto the bus. I can barely remember what happened because it was all of a sudden like a blur.”

Following the accident, doctors had to amputate his right leg and operate on the other one. “I only found out that I had lost my leg one week after the accident,” says Vysakh, his eyes silently reliving the pain. “Have you ever heard of something called a phantom limb?” he asks me, explaining, “It’s a phenomenon where people who have had their limbs amputated feel a painful sensation where the body part used to be. It is this feeling that it is still there even when it is not. And the sensation can be compared to the pins and needles that we feel sometimes. Even now, I feel like the pain is still there. So I had pain in both my legs for a while. Imagine dealing with the pain in a foot that you don’t have.” 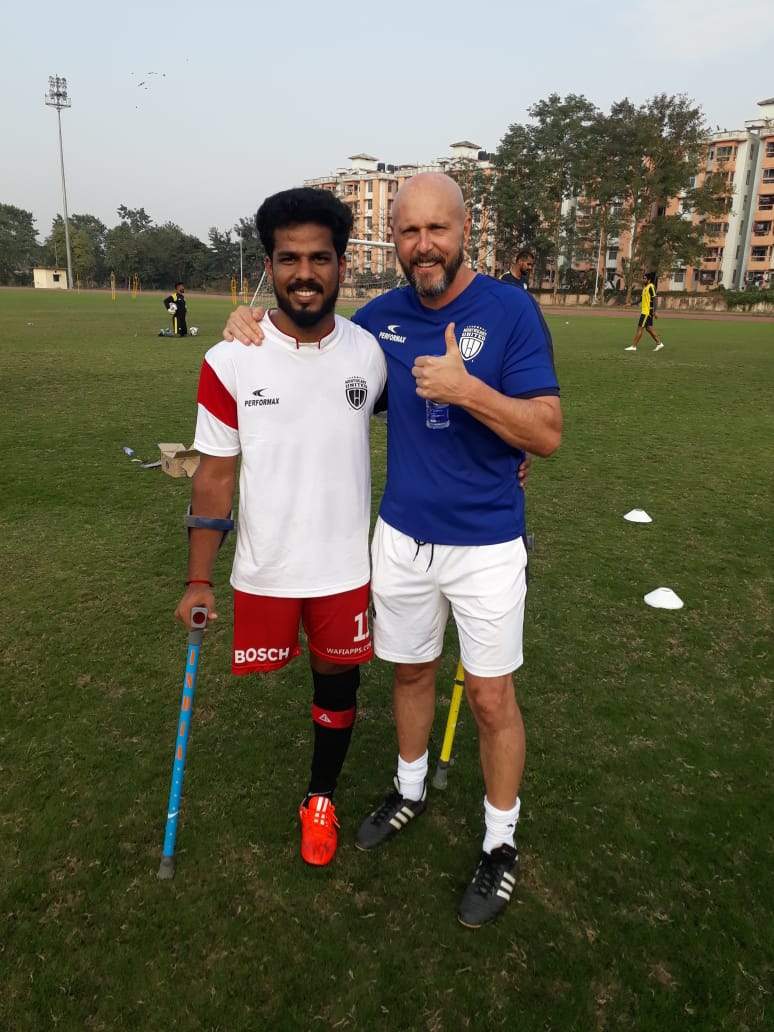 Hero moment: Vysakh is now an honourary member of the North East FC

For months, Vysakh underwent physical therapy at Kozhikode Medical College. Slowly, the possibility of being able to walk again dawned on Vysakh and his family. This steady walk back to football began at Devagiri College where he was pursuing his degree. He recounts, “I used to watch football matches taking place, just to try and get back that feeling by simply being on the ground where the action happens. There were many times where I tried to play the game like an ordinary person. That was not easy, I had to put too much effort just to run from one place to the other. I took my time though because I was determined to be just another player once I was on the ground, to make it about football and football alone. I practiced for many weeks until I was finally able to play with other people. I was slowly beginning to play the game like I used to, it was all going back to normal all thanks to perseverance and the support from my friends and family.”

Soon enough, he was a regular at every local football tournament. And this time not simply as an onlooker, but capturing everyone’s eyes as he won game after game on his trusted crutches. Pictures of one such game where Vysakh was caught in his frenzy made its way into social media fame when it was tweeted out with the tag, ‘More than a game’. The viral post caught the attention of the head coach of NorthEast United, Eelco Schattorie who invited him to be a part of the team as a guest and to fly to Guwahati to witness an Indian Super League match in person.

What does he have to say about achieving the impossible? “It has always been football that kept me going!” he says. “Nothing else would fill that void that it left in my heart so I just pushed myself to find that feeling again.”