Meet the people who are stopping Karnataka's schools from shutting down

Who's going to ensure that government schools in Karnataka don't shutdown because none of the kids want to study there? These rockstars for sure. Check out why they do what they do

Going door to door, to try and make every child in every village go to school are some heroes — who work quietly and without much support. And boy have they turned things around or what! The education department has been able to save some of the schools from shutting down by increasing the strength — one student at a time.

Tulsi Bai is among those people who have been motivating children to join school and access free education. A 25-year-old from Hoskote, on the outskirts of Bengaluru, a few years ago Tulsi completed her second PU and could not study further because of family constraints. She was also told by her parents that there was no need for her to go out and earn a living. 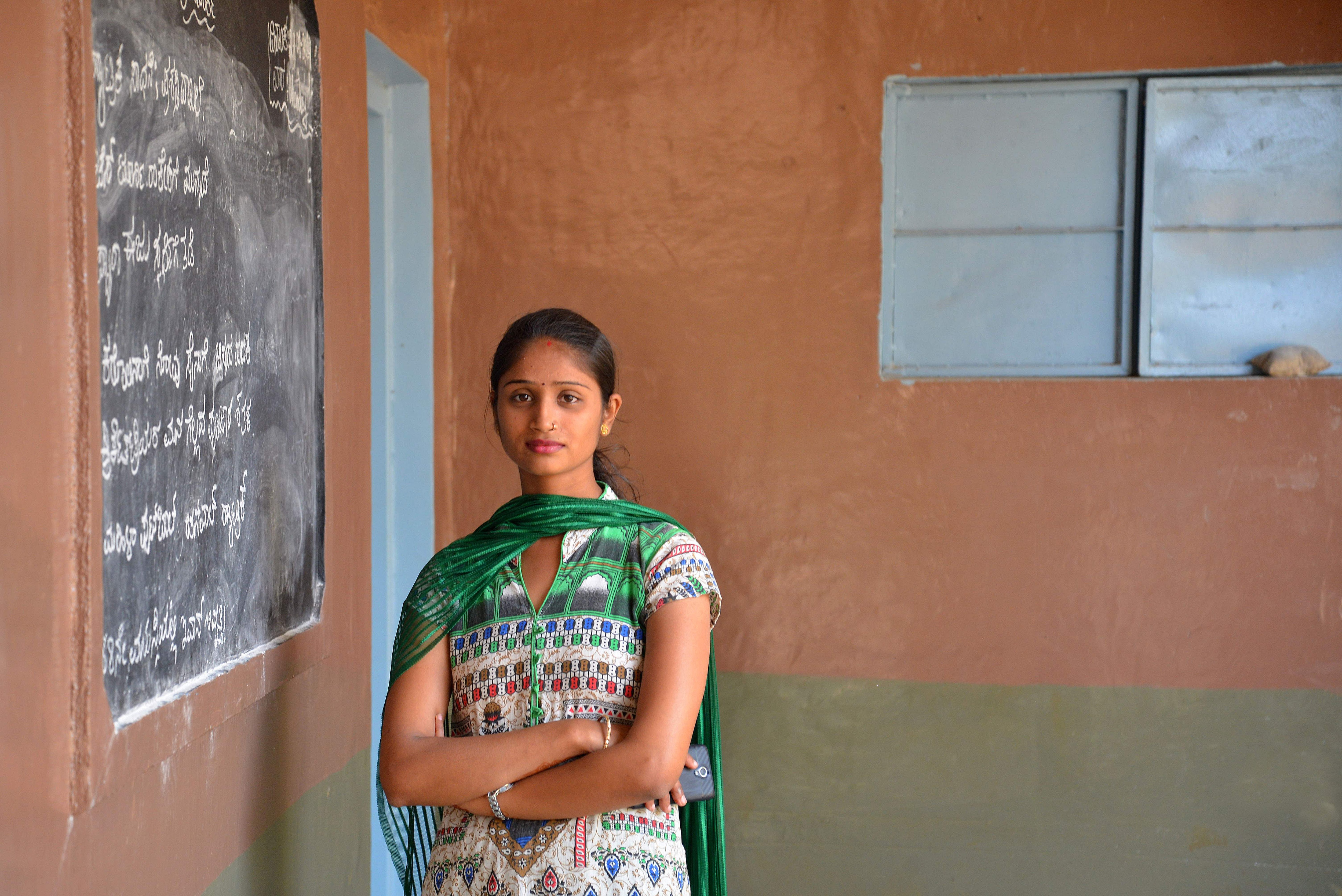 Role model: Tulsi Bai from APSA is a role model to many young people like her. She is dedicated to her work and does not miss a day in tracking the attendance of school children (Pic: Pushkar V)

That didn't stop her one bit. Two years ago, she came across an advertisement that said that the Association For Promoting Social Action (APSA) was looking for someone who could work on the field to enrol children in government schools. "Though I had no degree, I was interested in working with children. APSA trained us to talk to people. From then, there has been no looking back. This is my third year, and now, I am in charge of two schools in the Hoskote region. While one is a higher primary school, another is a high school," she says and explains her work day, "Every day, I go through the attendance register and see if any child is absent. We then visit them, find out why and counsel them and their parents to check if there are any family issues, whether they're finding the subjects tough or if any student is bullying them. All this is just to ensure that they don't become dropouts."

A large part of the job is reaching out to the community and ensuring they understand how things work exactly, "From March to May, we go door to door, campaigning in villages and surrounding regions. In some cases, the parents get angry and scold us because their child is an earning member and education is not important for them. We make them understand that education, school uniform, books, shoes, school bag and food come for free. We tell them the benefits of being educated and give various examples to motivate them," she explains. The results are tangible. And very evident. She has been able to enrol 15 children in a primary school last year. 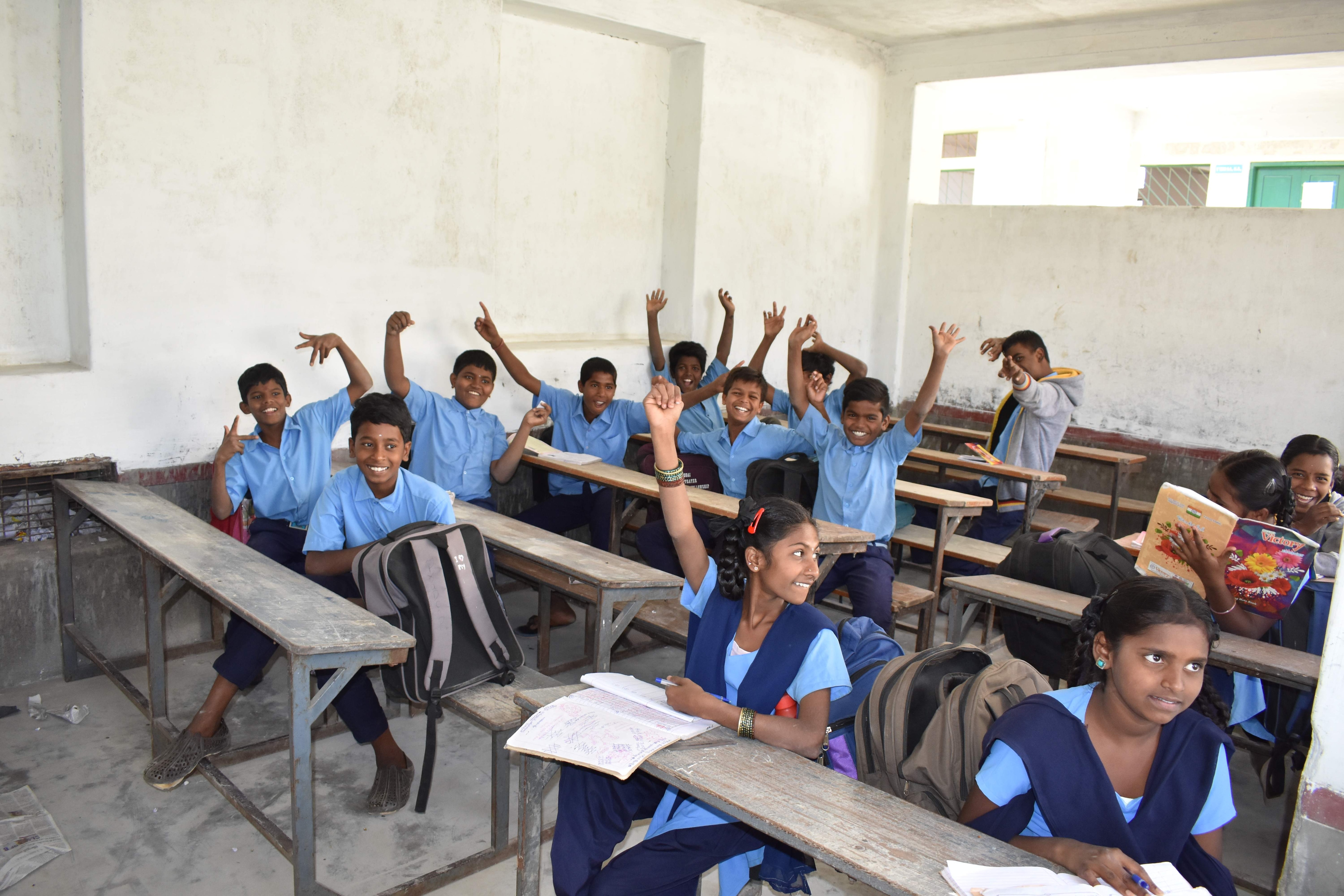 Critical condition: Very few children sitting in the classroom in one of the government schools in Bengaluru (Pic: Rashmi Patil)

In another world, 28-year-old Sunil Yadav, could have had a comfy teaching job. Instead, the BEd graduate works with an NGO called Sikshana in Bengaluru. Not that he did not get a job offer from private institutions. As soon as he completed his BEd in 2011, he got a job offer with a good pay packet, but he rejected it as he wanted to work with government schools. "How many graduates get an opportunity to work with government schools and colleges? I was fortunate to get it through an NGO. Right now, I work with 104 government schools in Bengaluru to increase the enrollment," he explains.

Part of the job also requires them to work like truant officers and psychologists rolled into one, "We have to work throughout the year to see that there are no dropouts and it is the biggest challenge for people like me. In some cases, children tell their parents that they are going to school but they remain absent. We don't inform their parents to avoid them getting scolded or beaten. It takes time but we are very soft spoken with such kids so that they come back to school," he explains.

In order to ensure community ownership and community participatio in education, the  Government has evolved this system of having a School Development and Monitoring Committee for each Government school

Some of the stories are heartwarming. At a time when the government is on the verge of shutting down several schools due to lack of strength, Sunil and his team members have been working hard to bring over 100 children to a school in Yengunte. He recalls, "We approached over 60 houses and told them about the freebies that the government is providing. It so happened that some students from private schools also joined the government school for which we had campaigned. Later, the headmaster thanked us for bringing a good number of students and saving the school from shutting down." 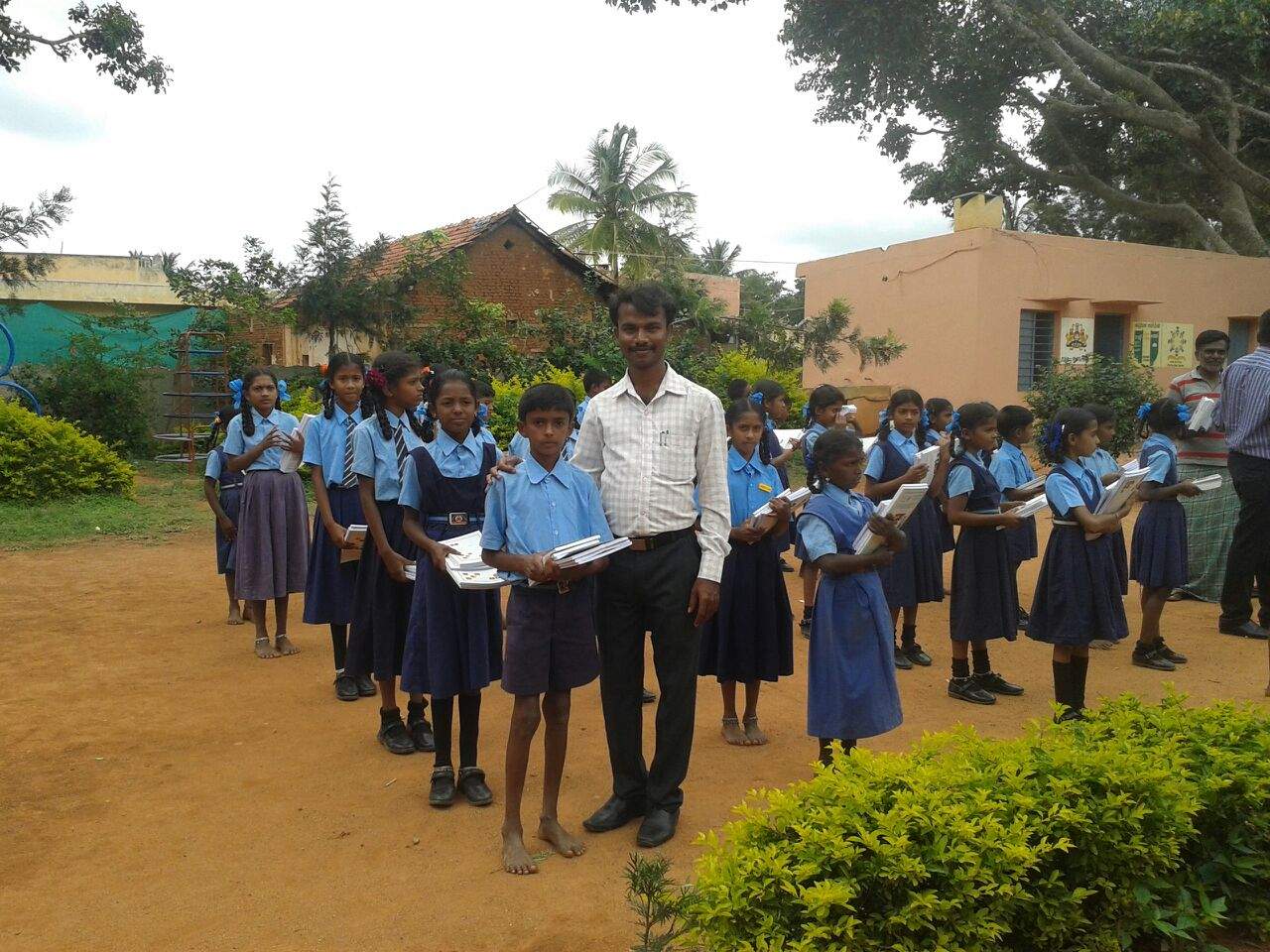 Full attendance: Sunil Yadav works with 104 government schools in Bengaluru rural. Most of his campaigns for enrolment are done with the help of his students (Pic: Sunil Yadav)

Rise of the Makkala Grama Sabhas

It is not just the campaigns and freebies that play an important role in the enrolment of children. At the rural level, it is programmes like the Makkala Grama Sabha that are conducted every year that can make a difference.

And it's all thanks to one man from Bellary who worked hard to see that the programme became a success. Raghvendra HC, who has a Master's Degree in Sociology and initially started his work by campaigning for enrollment in schools, has really put his heart and soul into it. His 15 years of social work have geared him towards making the Makkala Grama Sabha a working model. "It was not an easy task for me to convince the education department officials and local leaders to conduct this programme. According to Section 58, subclause 5, all the Grama Panchayats are supposed to see that the children in their village attend schools regularly. A separate budget should be reserved for their development. Unfortunately, no such thing happened until 2006. None of the Gram Panchayats had data on the number of children studying in primary schools, high schools or even Anganwadis. I wrote several letters to the district administration and education department officials that Makkala Grama Sabhas should take place and separate action plans and objectives should be drawn," he explains. 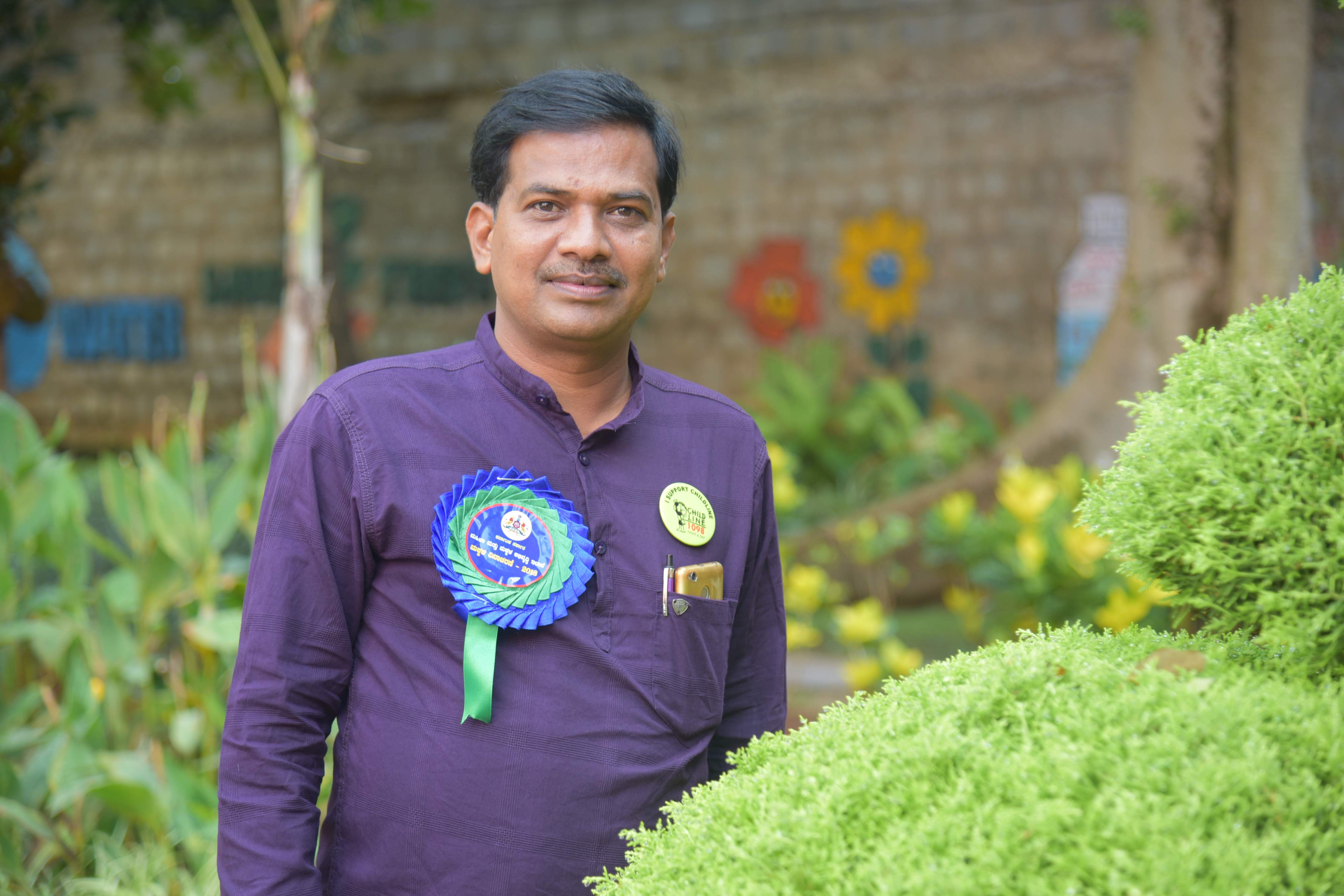 Success story: Raghavendra HC from Bellary is the person behind successful implementation of Children-friendly grama sabhas in his region

Finally, in 2007, it worked. Children-friendly grama sabhas are now conducted every year on November 14 in Bellary. Last year, out of 206 schools in different Gram Panchayats, 192 participated in this meeting. "We felicitate those children whose performance is outstanding in academics and other co-curricular activities. Even teachers are felicitated for their hard work and their teaching methods. This way, we keep them happy and attached to our schools," he says happily.


Why child labour is a deal breaker
Like Raghavendra, even T Venkatesh from Ittasandra, a village on the outskirts of Bengaluru has been working towards implementing this programme in regions like Kolar, Hoskote and so on. Due to various reasons, the meetings were never conducted. But, he has not lost hope.

He continues to enrol children in State-run school. For him, enrollment not only means canvassing homes and families but also a means to stop child labour. Along with his team, he has rescued hundreds of children from working in the sericulture industry. "Last year a sericulture factory near Hoskote had child labours working in it. When we spoke to the owner, he was not ready to let them go as the parents were given money and had signed a two-year agreement. But we convinced him and told him that we will repay him. Later, the children were enrolled in school and we felicitated the owner for letting the children go to school. He did not even take the amount from us. He realised that their future is very important," he says proudly 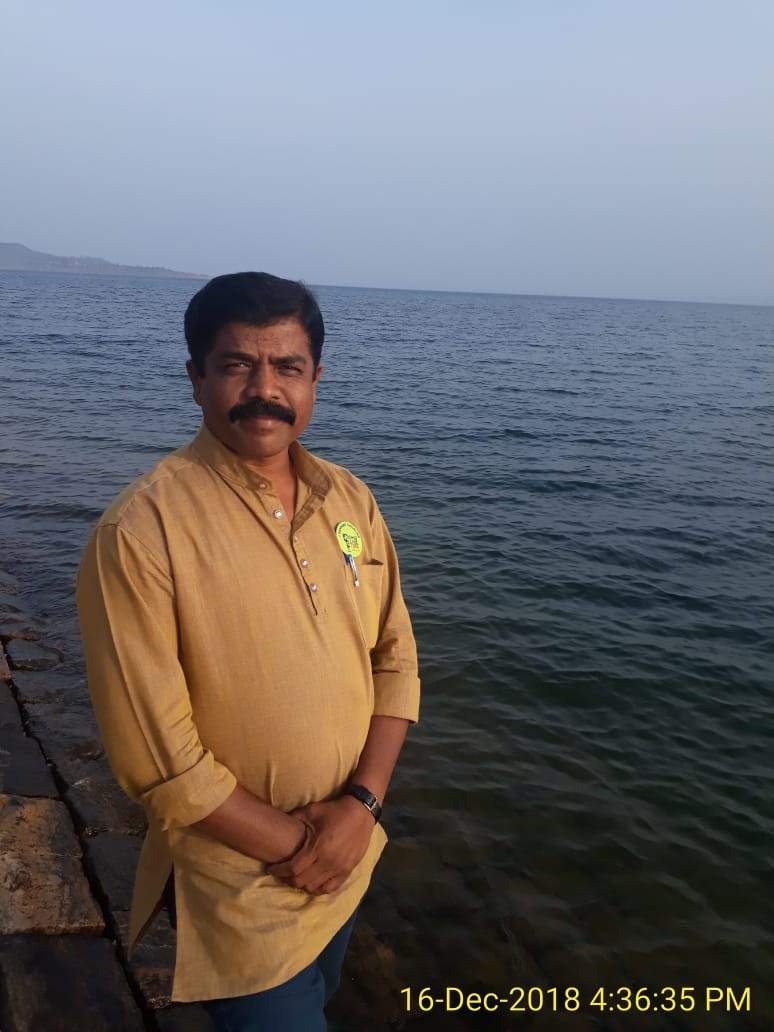 Deal breaker: Venkatesh has brought many child labours in sericulture industry back to schools

Last year, Venkatesh enrolled 68 children in government schools and aims to build on that number. "If the government provides proper infrastructure and separate subject teachers, then parents will obviously send their children to government schools instead of private ones. The state government should wake up and appoint teachers to fulfil the shortage. This can also bring good results during the SSLC board exams," he adds.

The budgetary allocation for school education is Rs 7,700 crore, constituting 15% of the total budget spend. According to the state education department, the ratio of teacher and children should be 1:30

Venkatesh also has a troupe that travels to different places to perform folk dance and songs. Recently, they were invited to perform in Singapore. "The money that we get from this performance is spent on developmental programmes for the kids," says Venkatesh.