Singer Parvathy Ravikumar has a bone to pick with the entertainment industry and society in general. As the leader of the first all-women band in Kerala, she named her band Drutaah, meaning speed. But what has kept them from racing to their full potential? “It’s our culture,” says Parvathy, without a shadow of a doubt, “Here we are, a group of women who want to bring something new to the music scene in the country and our parents don’t even have the confidence to let us travel alone!”

Since launching the band in 2017 with her friend Sam Shah in Thiruvananthapuram, the group has never shied away from experimenting with genres and styles. “We have created two of our own compositions and they are both based on Carnatic Raga music,” says Parvathy. “Right now, we are trying to focus more on creating our own content. These days, most bands are just taking existing film songs and doing covers. We want to bring some variety to the table,” she adds. 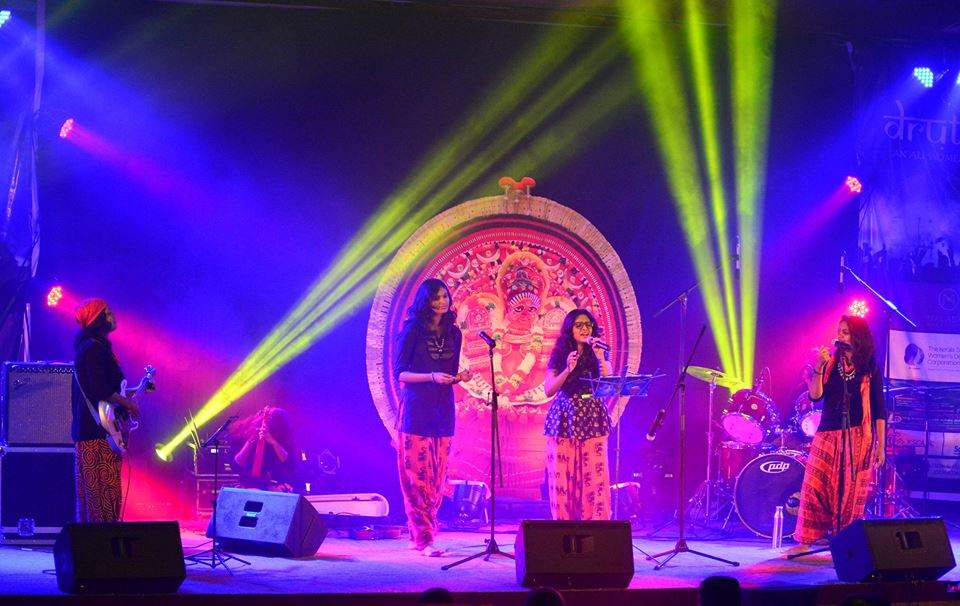 Tune in: The band likes to mix different genres and create a unique style

Parvathy hopes that Drutaah can make music by mixing their own Indian style with genres from around the world. She says, “We are trying to fuse with styles like Indo-African. We are even trying to bring artists from different countries to perform with us. It is an ongoing search.” With Parvathy as the lead vocalist, the band currently has eight members. While the main members are Mirza Mohan on drums, Larissa Coelho on the keyboard, Vagu Mazan on lead guitar and Vaishnavi Kannan on bass guitar, the rest of the members are temporary.

Drutaah has performed at various venues within the state and outside of it. Despite breaking barriers by becoming an all-women band, their greatest drawback continues to be their families. “Parents remain uncomfortable about letting girls follow their passions without supervision,” says Parvathy. And she doesn’t have it easy herself. “I am 26 now and society expects me to get married. All the other artists have similar problems when it comes to their family’s support.”

I think that women have grown to feel too comfortable in their lives. We study for a bit, then work for a bit and then we go straight into marriage. We are set in this endless safe zone. Very few of us bother to stray from this and we're the ones who have managed to create something new and innovative out of our lives

Their only respite comes from their audiences and their response. “Others have tried to start a band like this, but they didn't really make it. People mostly tell us how great our idea is. The Kerala government and the police have had our backs throughout this journey,” she states. The group has been involved in many programmes for the Kerala police, Techno Park and other major events. Their upcoming commitment is a crowdfunding programme for cancer patients in association with KIMS hospital. This year, the band will also be performing at Wonder Woman 2018, a programme that presents awards to women with unrecognised talent.

But finding band members in Kerala isn't easy. “We learned that we wouldn't be able to afford talent from the state, so we found professional artists from other parts of the country like Chennai and Mumbai.” On a recent audition that the band had held, only two or three women showed up and Parvathy points out why it can be problematic. “It is such a great opportunity that we're giving them, but only a few people took the effort. How do these women expect to perform with us if they can't even be bothered to travel for an audition? People just want to get things done in a simple and easy way these days,” she laments.

Before starting the band, Parvathy had other ambitions. “At first, I tried really hard to get into the film industry. But the response I got from the industry was very negative. Because I was an outsider without a godfather in the industry, I faced a lot of ill-treatment,” she recalls. Women generally have a million reasons to be disillusioned with the industry, but she shrugs it all away saying, “I asked myself ‘Why suffer for this?’. I am talented regardless of what they think and I can create something of my own. So, I created my own stage to perform in.”