At just eight, Aakaash A is a social activist and crusader for change in his locality. Here is the story of this young changemaker and his fight for justice

Around this time last year, a small seven-year-old boy accompanied by a group of villagers stood in front of a local TASMAC holding placards. They didn't raise their voice nor did they create havoc; they just stood there silently under the scorching sun for hours. Their need was simple — bring to the authority’s attention that the TASMAC near their homes in Padur was turning into a nuisance and that they want it shut immediately.

Soon, the boy along with his father and a few neighbours marched to the Kancheepuram Collector's office and submitted a plea seeking immediate action. The closure of the liquor shop marked the success of A Aakaash, now an eight-year-old activist. The media frenzy around his Padur agitation catapulted him to fame and soon enough, he was taking up issues which he felt needed to be addressed. 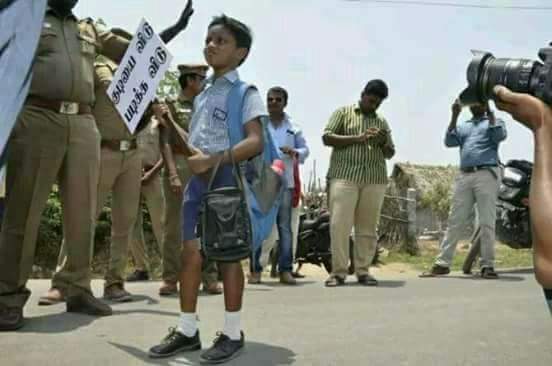 Right to fight: Aakaash interacting with the media and police personnels during his march to shut a local TASMAC near his home in Padur

But for Aakaash, this wasn’t his first time in the public eye. He started to show interest in social issues by the age of four. After witnessing an accident, Aakaash conducted a small awareness drive about the importance of helmets, “Aakaash had witnessed an accident where a young boy lost his life because he wasn’t wearing a helmet. On our way back, I told him about the importance of wearing a helmet and he asked me whether the boy was lazy to not wear his,” narrates his father, Chengai Anandan.

Soon enough, the four-year-old was asking every rider whether they wear a helmet. “One day, his uncle visited us and when Aakaash found out that his uncle wasn’t wearing a helmet, he chided him and warned him that he would die if he doesn’t wear his helmet,” his father says, “We were quite taken aback as it is unusual for a four-year-old to be interested in such matters, but we didn’t discourage him either.” 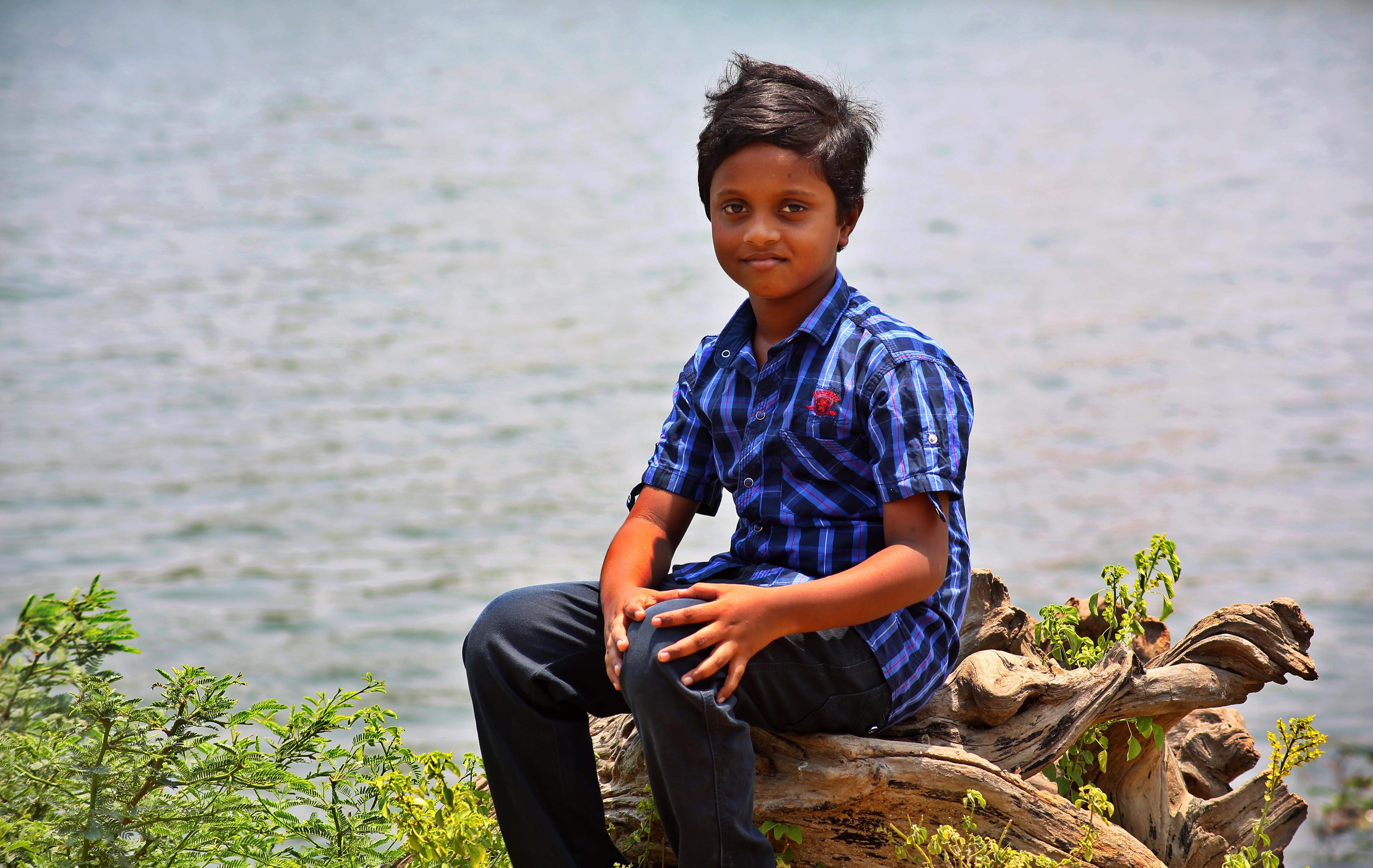 Let's change: Aakash was just four-years-old when he started his campaign on helmet awareness

On seeing the young boy's charm and his resolute, Chengai printed 1,000 pamphlets on helmet awareness and on Aakaash's fourth birthday, held an awareness drive at Sholinganallur signal. “We didn’t even have to tell him what he had to do. Aakaash just got off the vehicle and started telling people about the importance of wearing a helmet,” says Chengai.

We wondered why this was so important to the eight-year-old. Aakaash tells us that the age and size of a person shouldn’t matter when it comes to doing good for the society, “I just want to show others that not just big people, but kids like me can fight for a cause too. I had the confidence that I could do it so, I did it,” explains Aakaash.

True to his words, Aakaash makes it a point to encourage his friends to join his cause as well. Right after he concluded the Padur TASMAC closure drive, he led a cleanliness drive at Periyakulam, a pond located a few feet away from his home. “Around 100 people along with my friends, removed plastic from the pond. It was important for us to do that as we all know how important water is and why we need to preserve it,” Aakaash says, with a wide smile. 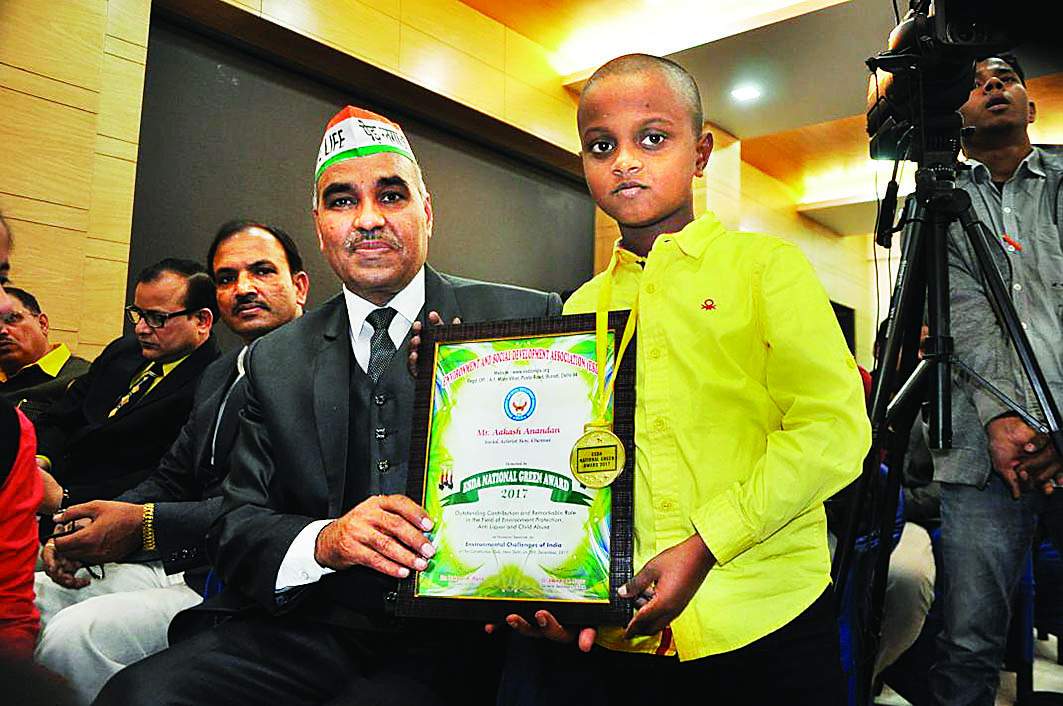 Greener tomorrow: Aakaash was awarded the Green Award for his cleanliness drive, where he along with 100 volunteers removed plastic from a pond

If you think that all this speaks volumes about his character, then the strength of his character was only proven stronger when he helped two girls file a complaint against a shopkeeper on grounds for sexual abuse. “I happened to hear them cry one day and they told me how the shopkeeper had touched them in a bad way. I knew this was bad and we informed the girls' parents,” recalls Aakaash.

Protector of the innocent

When asked about the dangers of taking up a grave issue like sexual harassment, which could land him in bigger trouble, Aakaash says, with sheer conviction, that he fears no one. “This my country too. I too have the right to fight,” quips Aakaash, in an unwavering tone

Aakaash, who one day hopes to become an IAS officer, sees Mahatma Gandhi as his role model and emulates Gandhi’s principle of Ahimsa in many of his campaigns. “I am truly inspired by his principles and just like how he fought for the country, I wish to take up more issues in the future and bring justice to people,” says Aakaash.