The powerlifting champion who wants to bring a difference in society, Majiziya Bhanu, speaks about the importance of following dreams

Twenty-three-year-old Majiziya Bhanu is not what comes to mind when you imagine a female powerlifter. Images of her clad comfortably in what can only be called a 'burqatard' have the potential to change many such preconceived notions. Born and raised in Orkkatteri, Kozhikode, Majiziya has perfected the art of balancing a degree in BDS at Mahe Institute of Dental Sciences and her lifelong dream of becoming a powerlifter. This young woman has managed to tread the fine line between passion and tradition, all the while powerlifting a weight of 370 kg. She speaks to us about what drives her and the support system that she can always count on. Excerpts:

Even though I have always been active and strong in sports, I never thought about bodybuilding or fitness in a professional way. It was my husband Nour Ahmed Alizaey who encouraged me to participate in the Mr Kerala Women's Championship of 2018. He gave me the strength to work hard from miles and miles away in Afghanistan, where he lives. I began intensive powerlifting training by the end of 2016. I won a silver medal for our country at the Asian Powerlifting Championship in May 2017, which was held in Indonesia, and I won a gold at Women's Fitness Physique 2018 held at Darbar Hall Stadium, Kochi. Later, I was declared the ‘Strongwoman of Kerala’ thrice by the Kerala State Powerlifting Association.

You have grown popular as the first woman in a hijab to win such a competition. How did your religious and cultural identity shape your journey?

On the stage, I felt very special and unique because I was the only person who looked like me. I'm 'hijabed' and I'm proud of it. For me, it is about freedom. A woman should be free to show her body and she should be just as free to cover it. I want to let the world and women like me know that the hijab is never an obstacle for women. If you have unstoppable passion and really want to prove yourself, you will see that it is not just a piece of cloth; you can use it to add to your strength and dignity.

Power packed: Majiziya has earned the 'Strongwoman of Kerala' position three years in a row

Tell us about the Mr Kerala contest and how you prepared yourself for it.

The Mr Kerala contest is organised by the Body Building Association of Kerala and Sports Council of Kerala together. I competed in the Women's Fitness Physique contest. I prepared myself in a way that I was comfortable. At the time, I did not actually have any idea about the bodybuilding competition and had a few misconceptions about it as I was so busy and occupied with powerlifting. Thankfully, my family and my husband gave me the support to participate in the bodybuilding event.

How did your family respond to your passion?

I grew up in a very small village called Orkkatteri, which is miles away from the city and from the modern lifestyle. As a child, I was eager and enthusiastic to learn and practise all sorts of sports. My parents supported me and did everything they could for me to achieve my dreams. They enquired about games and championships that I could take part in but unfortunately, none of them were available in our village or the town nearby. But I never gave up, I did everything in my power to go out and explore the possibilities and I really made it. 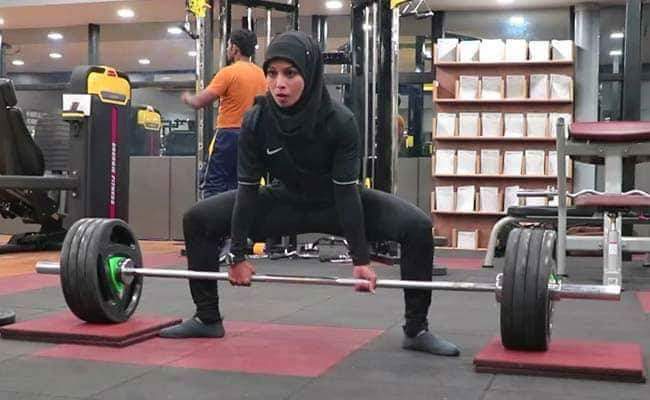 Lifting spirits: Majiziya is trained in both powerlifting and bodybuilding

What advice do you have for women who are interested in doing the same, but lack the confidence?

What I did was an attempt. Now it's clear that it was worth it because of how the world is looking at me. Nothing and nobody can stop us from anything if have destiny on our side. Being a girl or being a Muslim doesn't matter. Every religion and culture is valuable and respectful. As long as we give it our all, it can never come in the way of a game. If my circumstances were favourable from the very beginning, the whole world would have known me by now. Unfortunately, there is no support for me to move forward and be a part of the competition at an international level. But I'm confident that the day will come soon.

Did you face any challenges along the way?

It was very hard for me when I first started going to the gym. People used to advice me and my parents about what was right and wrong. I grew so tired of explaining myself. In reality, I'm really blessed because God allowed me the luxury of not having to explain anymore. If we start caring about what society wants, the only option we will be left with is to become housewives. Today, I stand up for my own rights and fight for my dreams because I know that I have the same rights and abilities as any man.

What plans do you have for the future?

My future plan is to participate in the world championships. I also want to finish my BDS and become a proud doctor who helps people. I want to establish a sports academy to help children chase their dreams. I also want to make my country, parents and husband proud. I will strongly continue on the path of bodybuilding and powerlifting. I will play any game that I'm capable of playing and stand proudly on top of the world without changing my identity or my personality.