Want to attend coaching classes for competitive exams, but can't afford it? Worry not! Sabarmathi Gurukulam allows you to pay them in kind instead

As we drive amidst the green farmlands of Velianallore village in Cheyyar Taluk, we witness the unparalleled richness of nature — lush trees, varied flora and fauna, and everything bathed in green. As we drive past the Cheyyar Bus Depot to where the Sabarmathi Gurukulam is located, I observe two large hoardings proudly displaying a picture of G Nammalvar, a Tamil environmental activist and organic farming expert known for spreading the good word on organic farming. The Gurukulam (as it is often referred to) is built with mud structures and thatched roofs and is spread across 1 acre of land. But with the number of schools in rural areas on the rise, what makes this one so special?

Sabarmathi follows the ancient gurukula system of teaching. One can choose to pay with either money or with anything they possess, in exchange for education — much like the barter system. The Gurukulam offers to coach for various competitive exams — UPSC, Banking, TNPSC, and NEET. Started in April 2017 by A Gunasekaran, with an aim to ensure that education doesn't become a burden, Sabarmathi doesn’t teach students for free, neither does it follow a set norm for fee payment. "There is always a high demand for government jobs and due to increased unemployment, there is massive competition for these jobs. This demand has made preparing for competitive exams very costly and for aspirants from poorer families, it has become a burden to afford coaching as they have to pay somewhere around ₹1-1.25 lakh. That's when the idea of Sabarmathi Gurukulam developed," says Gunasekaran, who is also a guest faculty at Shankar IAS Academy, Anna Nagar. 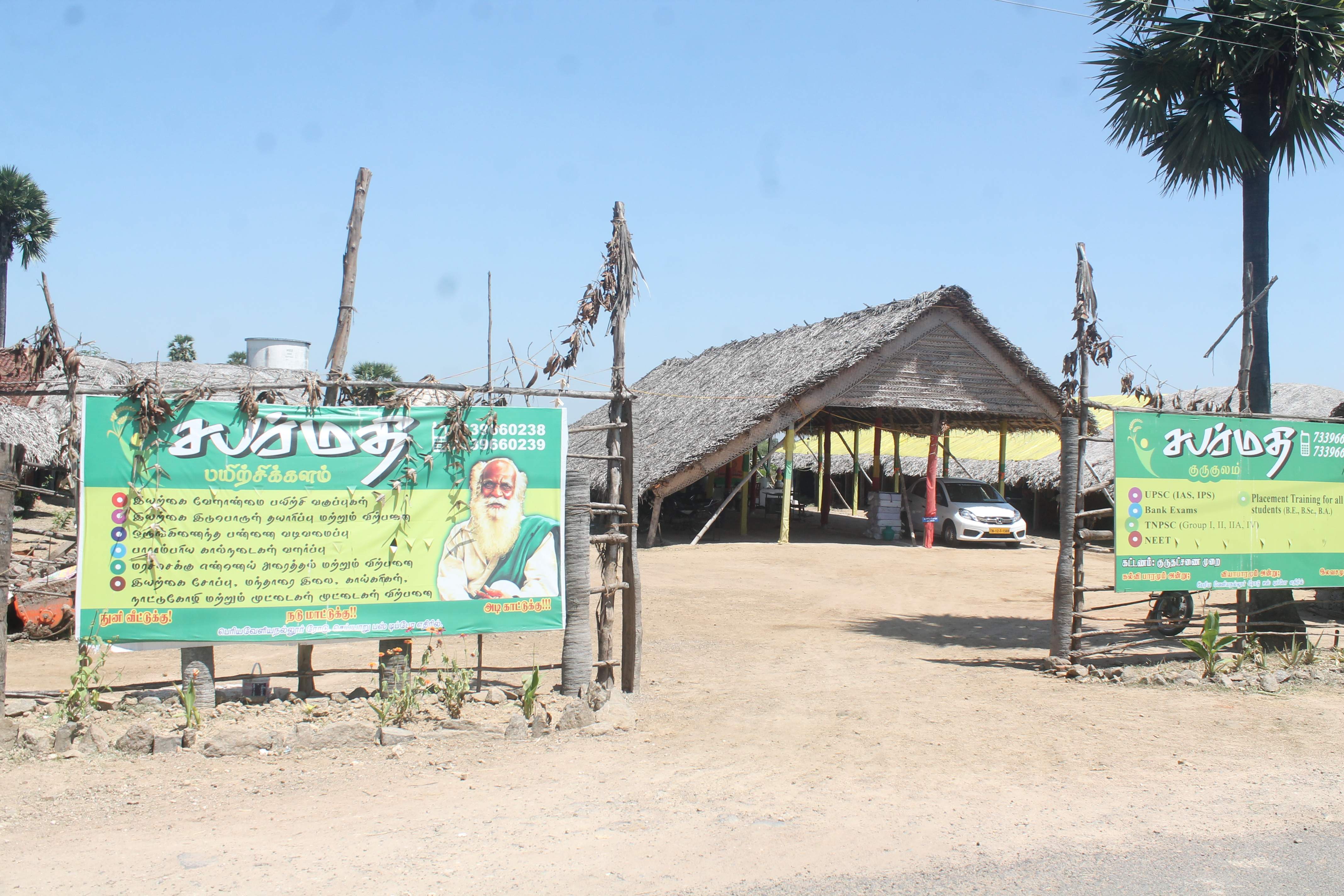 Great help: Through Sabarmathi Gurukulam, Gunasekaran is helping students in their subjects and provide tips to score better

A social worker at heart

It all started back in 2002 when Gunasekaran was studying at the Government Engineering College in Erode. He and his friends had raised funds to support an old age home and they did so by collecting ₹10 from each student in the hostel, raising a total of ₹15,000. They also reached out to the alumni, requesting them to donate. By the end, they were able to raise ₹50,000, which was beyond their expectations. With the money they raised, the old age home’s founder was able to buy some land on the outskirts of Erode. Then, the team collaborated with another engineering college in Tumakuru and raised ₹1 lakh, through a charity show, for the construction of a building on that land.

Moved by the thought that there are no coaching centres in villages, Gunasekaran wanted to start something in the remote areas, where people can get access to education. Through Sabarmathi Gurukulam, Gunasekaran and his team of three help students in their subjects, conduct mock tests and provide tips to score better. While the students can choose to pay for their coaching according to their financial background (which they refer to as gurudakshina — whatever they can afford) the hostel inmates are required to pay ₹2,000 per month towards accommodation and food expenses.

However, this amount can be paid in one of three ways — in cash, by doing organic farming for two hours every day, or by teaching students in nearby villages. The overall strength of students in Sabarmathi is 80, out of which 50 are hostel inmates and 30, day scholars. The money payment system is the least preferred option among the gurukulam students. "Students can visit nearby villages and conduct tuitions for government school students. As the school curriculum forms a majority of the competitive exams syllabus, this will not only help these children but also the gurukulam students. In return, the Smile Foundation covers their hostel accommodation, which accounts for ₹1,500 per month. The motive here is to educate as many rural children as possible and improve the quality of education in government schools," he says, adding, "Sabarmathi Gurukulam addresses brain drain, agricultural decline, and unemployment."

But why organic farming?

Gunasekaran feels that merely coaching students in exams will not make them employable, as the success rate in these exams is quite less due to the background of the students, who have studied in government schools and colleges. It was then that he got the idea of introducing students to organic farming and also make them employable. The revenue generated by their farming activities goes towards their food and accommodation expenses. Currently, 25 students are availing the option of doing organic farming to pay for their expenses. "Students find farming more interesting and relishing. This also promises an alternate career for those who do not land a job. The basic intention is to make them employable," he says. 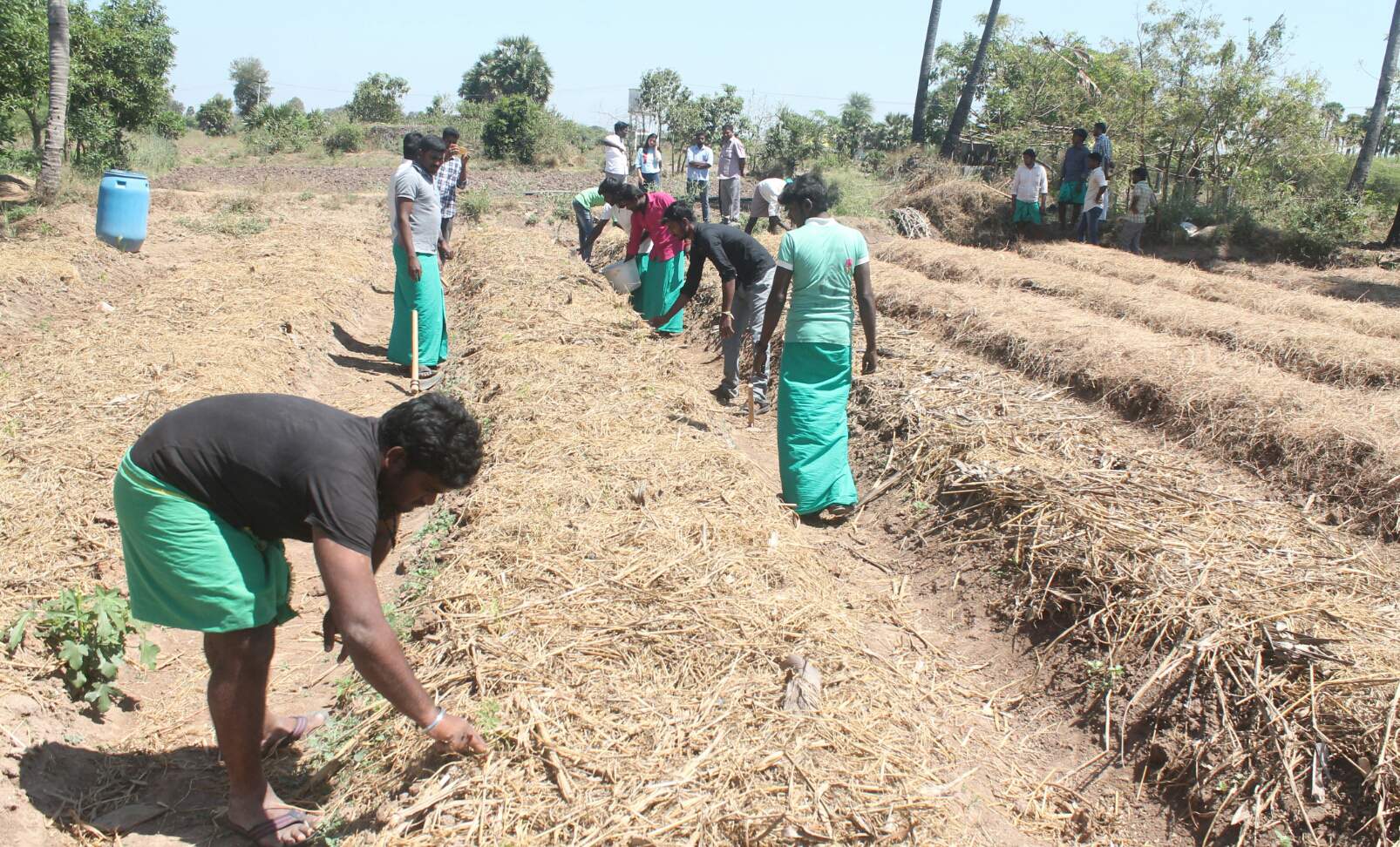 For the better: In the future, for every five students, one acre of land will be taken on lease and will be allocated to the students for the purpose of farming

Apart from this, students are also involved in activities like making organic soaps and leaf-plates and extracting groundnut oil, which is later sold in the cities. The revenue generated from these is also used in the gurukulam. Currently, Gunasekaran is dependent on his friends and family to run the gurukulam, but within the next one year, he hopes to make it self-sustainable. And what's next on the cards? Gunasekaran plans to start a Sabarmathi Gurukulam in every district surrounding nearly 50 villages and reach out to as many students as possible.