Most of India's young, visually-challenged students often aspire to get a better education, but very few think about. Perhaps the inspiring Indian Blind Cricket Team can help change this notion

The crowd, the players seated in the pavilion and the coach anxiously gaze at the sprawling green of the Sharjah Cricket Stadium. It was a nail-biting match between India and Pakistan. But surprisingly, the crowd was silent, except for a few stray muffled chants in support of either team. Against the backdrop of near-silence, the Pakistani bowler approaches the crease with an odd-sized ball — slightly larger than the kookaburra. The word 'play' escapes his mouth as he releases the ball.

Before reaching the Indian batsman, the ball pitched twice. With his sharp sense of hearing, he senses where the ball has pitched and swings his bat mightily. Before he can realise what was happening, the jubilant few erupt joyously and sweep him off his feet. This is the moment of truth. In regular cricketing terms, this could have been a moment described by Ravi Shastri (during his commentary heyday) as being one for the history books. World Cup finals tend to have that effect on commentators, players and the public. Public? Well, the few but faithful anyway. Championed twice: The Indian Blind Cricket Team was the winners of the 2018 Blind Cricket World Cup. Previously, they had won the  2014 World Cup as well

“Even though we had won a World Cup before, the 2018 Blind World Cup was special because it was the first time the Indian team had won a World Cup under my captaincy," says Ajay Kumar Reddy,  the captain of the Indian Blind Cricket Team, reliving that defining moment in time. Ajay, who is partially blind, joined the team when they started and has been awarded the captaincy in 2018. This year’s World Cup win wasn’t their first. Neither was this their first triumph over the Pakistani team. They had defeated their arch-rivals in the 2014 World Cup as well besides having won two T-20 World Cups against them.

Here's how they roll
Though cricket for the blind was first played in Australia in the 1920's, the game made its way to India only in the mid-80's and eventually, a formal association was set up in 2010 and it was christened —Cricket Association for the Blind in India (CABI). Their goal was simple: to educate the masses about the capabilities of the visually impaired and to showcase their talents on a cricketing pitch. The team consists of 11 blind players who are categorised according to their vision. A fully blind player falls in the B1 category, partially blind player in the B2 category and a partially sighted player belongs to the B3 category.

The rules of the game and the equipment, from the ball to the stumps, are modified to enable them to play smoother. While a bowler is required to bowl underarm and say ‘play’ before the delivery, a blind batsman hits the ball after it has pitched twice. However, a partially blind man is required to hit the ball on the first pitch. As for the ball, it is filled with ball bearings, so that the batsman and other players can pick up the sound and locate the ball. The stumps are also slightly larger metals tubes that are painted with bright colours for the partially blind players to see and for a blind player to touch and feel — thus helping them position themselves before batting or bowling. 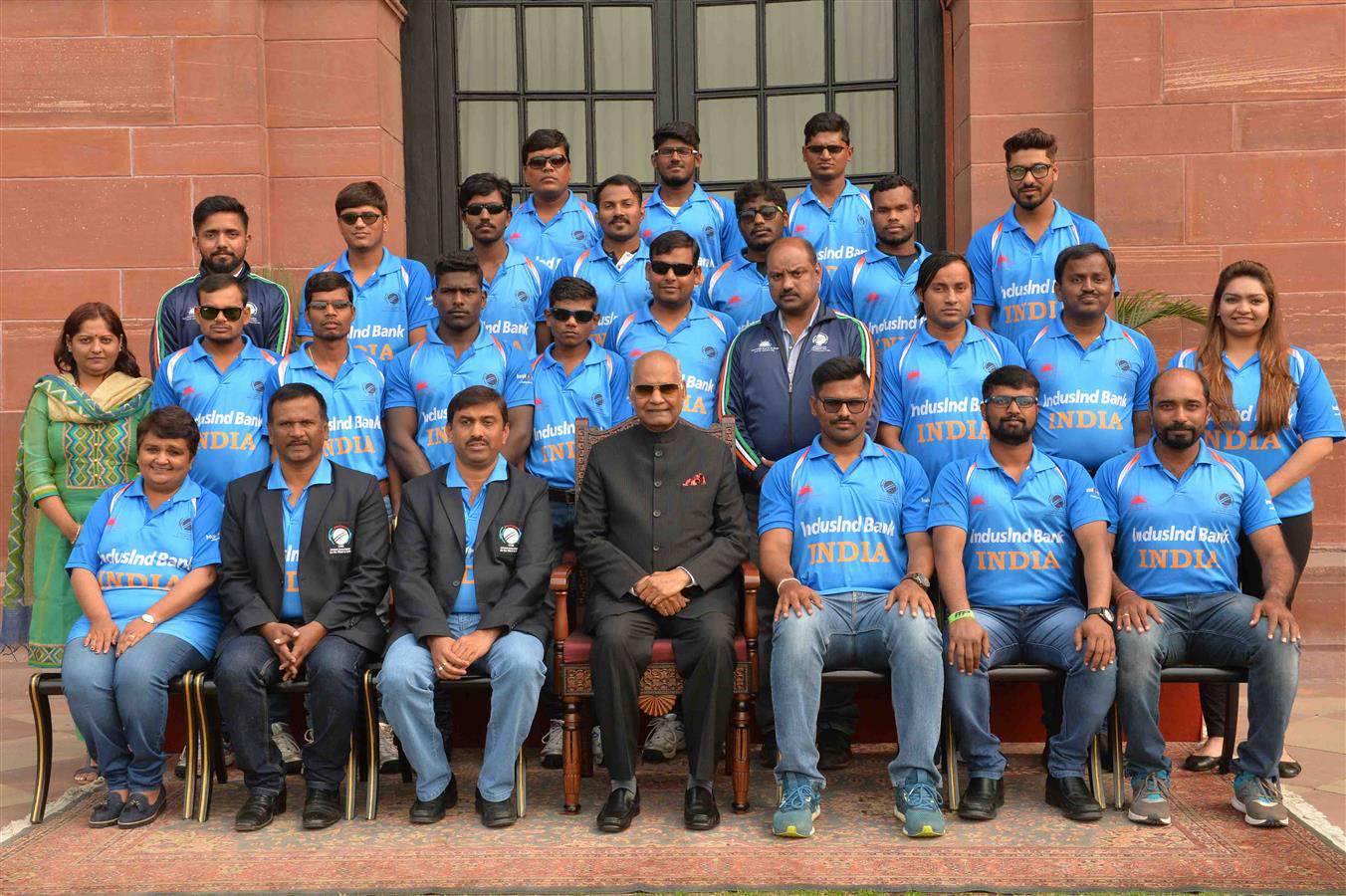 “There are a few modifications made for the players who are blind. Apart from that, the game is largely similar to the mainstream game. The matches can be stiffly competitive as well, especially when it's a game between teams like India and Pakistan," says John David, the Indian team’s coach, who played for the Maharashtra Blind Cricket team for nearly 14 years before joining the national team as their coach.

It's not a level playing field
Despite the Indian team’s big win, they have been struggling to get proper infrastructural facilities and unlike their mainstream counterparts, they don’t have sponsors knocking at their door, “One of the major challenges that our team faces is getting a proper playing ground to practice on. Right now, we are using mud grounds and the players are finding it hard to play on that rough terrain,” says David. This is a far cry from the facilities that not just Team India, but also district and state teams across the country, enjoy playing on.

Reddy, the Indian captain, also points to the lukewarm response from the government after their 2018 World Cup win, “Previously, we have had the opportunity to meet the Prime Minister and this time, we met the President after winning. However, the sports ministry still hasn’t officially acknowledged us for our 2018 win,” says Ajay somberly. Contrast this to the hue and cry that Kohli and company enjoy when they as much as win an ODI series in South Africa and the sheer disparity can be jarring. Ironically, the team recalls there being a much better reception from the government and public alike, last time, “I remember when we first won the World Cup, the then Sports Minister Sarbananda Sonowal met the team on arrival and the ministry awarded Rs 5 lakh each to our players. This time we expected more appreciation, as the Sports Minister Rajyavardhan Rathore was a sportsman previously. Not only have the sports ministry contacted us, they still haven’t rewarded us liked the previous time,” David adds.

The grass is 'greener' on the other side
When asked about the added advantage that the Pakistan team has when compared to them, David says that the only difference is that they have a strong body backing them “The Pakistan team comes under the purview of the Pakistan Cricket Board (PCB). Similarly, we want to associate with the Board of Cricket Control of India (BCCI) as it would enable our players to use their world-class facilities to train better,” David adds. David also points to the general acceptance of the Pakistan team in their country. “ I am not saying that in India we do not have public support at all. In fact, for the 2012 T-20 World Cup, more than 25,000 people attended the finale in Bengaluru. But I would appreciate it if the crowd would come in larger numbers as it would mean a lot to our players,” he says. 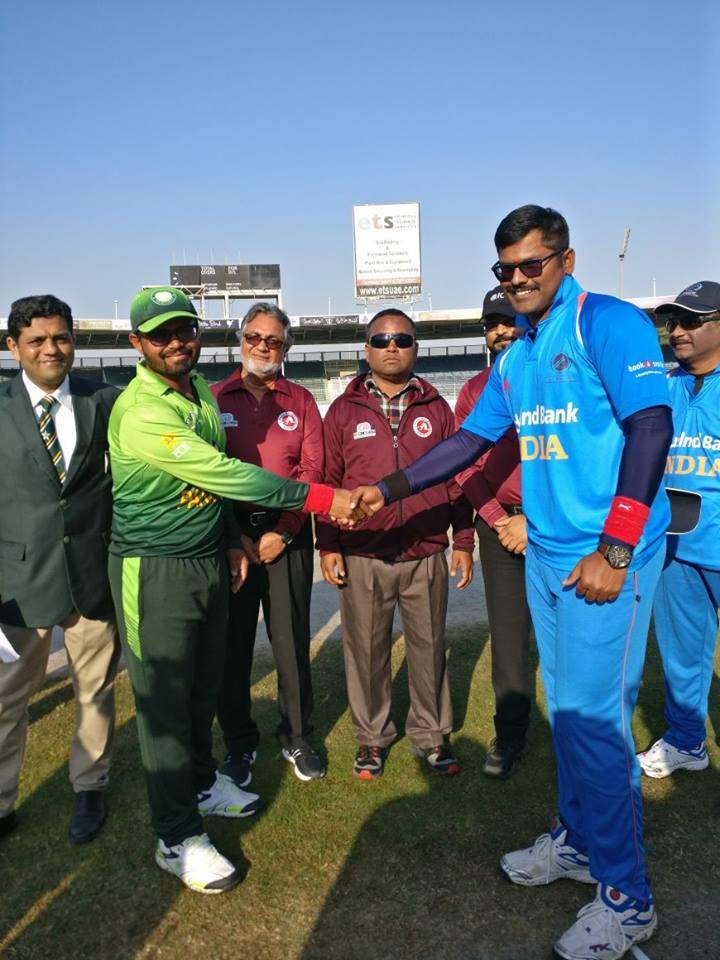 Blue vs Green: Ajay Reddy, the captain of the Indian team shaking hands with his Pakistani counterpart before the World Cup finale

As for the players, most of whom come from an economically challenged background, cricket isn’t their only source of income. Most of them have alternate careers and only come together before a series begins, “I work as an Assistant Manager in SBI and my colleagues are extremely supportive. But, the same isn’t the case for other players. Some of them come from extremely poor backgrounds and it would be really helpful if the government could support us by giving them a job opportunity,” says Ajay.

The team is currently in talks with the BCCI and the government, asking them to bring the ambit of blind cricket under the BCCI's purview. “We are planning to associate with BCCI very soon. They told us that they would help us with infrastructure including that at the National Cricket Academy. We are also planning for a regular meeting between mainstream cricketers and our players every three months to play some awareness matches,” David says.

Now that's going to be quite a sight to behold!