Ocean's half-dozen: In May, an all-women crew had circumnavigated the globe and this is their story

We listen in to the highs and lows of their journey from two members from the crew, Lieutenant Aishwarya Boddapati and Lt Commander Swathi P​

Gone are the days when men used to sail away on great overseas voyages either to consolidate more land or to indulge in the spirit of adventure, while their women waited for them by the docks. On May 21, 2018, six women naval officers from the Indian Navy set sail in India's second sailboat, the INSV Tarini (the INSV stands for Indian Navy Sailing Vessel), not for gold or glory, but for the country. In a mission called Navika Sagar Parikrama, they braved turbulent waters to circumnavigate the globe in 254 days and in doing so, they travelled over 22,000 nautical miles to become the first all-women crew in the world to create this record.

We catch up with homegirl Lieutenant Aishwarya Boddapati from Hyderabad and listen in intently as she retells the tales of the high seas and relives every moment that the six women went through to make India proud.

Fremantle, Australia
After Defense Minister Nirmala Sitharaman flagged the INSV Tarini off the coast of Goa on September 10, 2017, their first stop was Fremantle in Western Australia on October 23, 2017. And right off the bat, they met their very first challenge when their RO water plant failed them. But the rain gods decided to show some mercy and let it pour. Through rainwater harvesting, they managed to collect some water and sustain themselves. The vessel also sailed through a low pressure area and that's when Boddapati realised, "Nothing is going to be smooth from here on out." And once they crossed the equator, they didn't see warm weather again for a while. Upon arrival in Fremantle, they changed the sails, did other repairs and hit the seas again.

Lyttelton, New Zealand
Blessing their lucky stars for a bit of smooth sailing, Boddapati said sincerely, "This leg was smooth, maybe it was because of the people praying for us back home." They were expecting to reach this port in 30 days, but they managed it in 25 days, on November 29, 2017. And not only did they spot lots of whales and dolphins along the way, but they were also treated to the beauty of the Southern Aurora lights. 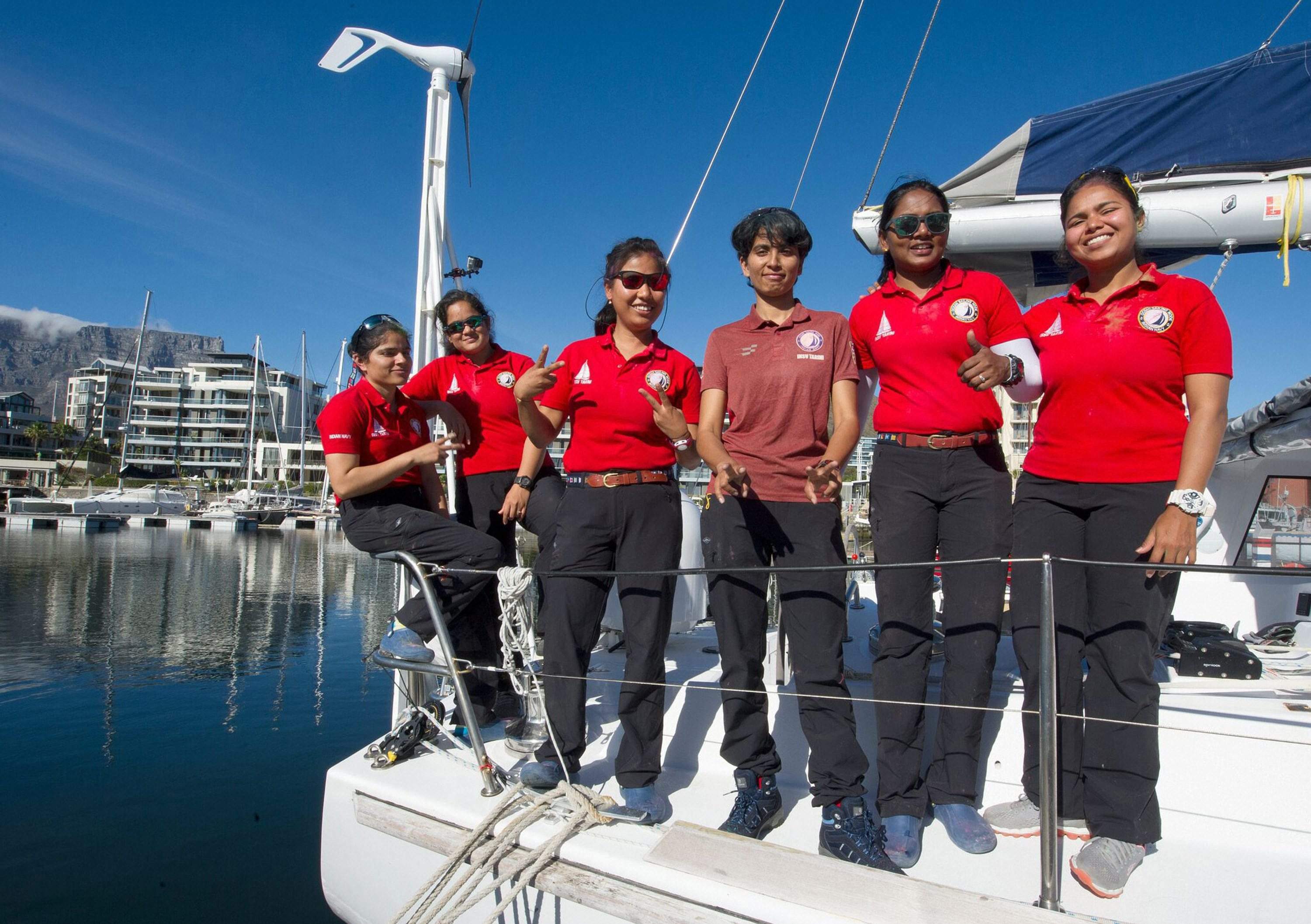 All together: The six-member crew of INSV Tarini

Fort Stanley, Falkland Islands
But their luck soon ran thin. "The toughest part of our voyage began when we crossed the South Pacific Ocean," informed Boddapati. Not only was it extremely cold (so much so that they had to sleep with hot water bags beside them to keep the blood circulation going), but they also encountered a hurricane which brought along with it massive four-metre-long waves. While the chaotic waves flung some of the crew members overboard, the icy winds gave others frostbites. And the crew weren't the only ones affected. The vessel's engine, which is needed while entering and leaving the harbour, breathed its last. But overcoming all obstacles, on January 21, 2018, the INSV Tarini finally reached the Falklands Islands, "which was breathtakingly beautiful," she sighed.

Cape Town, South Africa
After a quick halt, the crew quickly sailed through one of the most dynamic oceans — the Atlantic Ocean. "We started scaling latitudes swiftly and once we started inching towards Cape Town, we met warm weather once again," recalled Boddapati. They finally docked at Cape Town on March 2, 2018. There, they refrained from their regular cleaning of the vessel due to an ongoing water crisis.

The criteria for circumnavigation are crossing the equator twice, crossing all the longitudes and crossing the three great capes, namely Cape Leeuwin, Cape Horn and Cape of Good Hope

Port Louis, Mauritius
After a 12-day rest stop, they set sail from Cape Town and headed towards the homeland. They were expected back in April 2018, but they were in for a huge shock. Their sail system gave up on them and they had to take a detour to Mauritius. "It was a huge emergency," said Boddapati. A journey which would have taken them a day took three days, but finally, they arrived in Mauritius where the ship underwent repair.

Goa, India
The six women finally touched Indian soil on May 21, 2018, and were flagged in by the Defence Minister, once again. 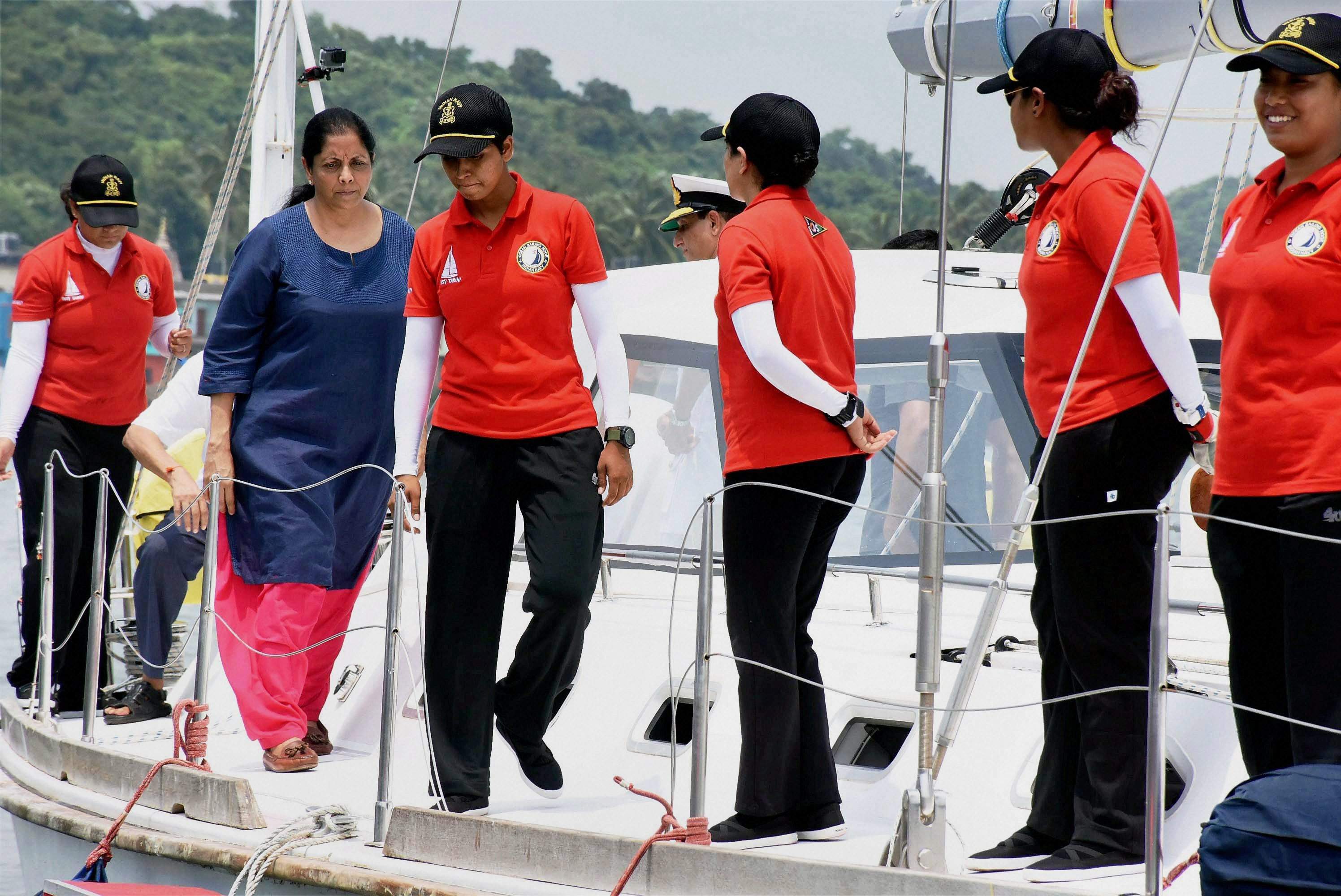 Here they are: The crew with Defense Minister Nirmala Sitharaman

One big, happy family
When you put six opinionated humans under one roof for closer to a year, one can expect some fireworks. Same was the case on the INSV Tarini, says Lt Commander Swathi P. "It was like a floating Bigg Boss house," says the Lt Commander from Visakhapatnam, explaining how, no matter what, no one could hide their emotions from each other as they used to "eat, drink, sleep and even breathe together." But the crew stuck it out together through the gigantic waves of cold water imposed by the sea and painful waves of cramps imposed by their menstrual cycles. Through it, all never did the crew lose sight of their mission — to reach India safely and make the country proud.

And in the process of achieving this mission, some thick friendships were formed. Take Lieutenant S Vijaya Devi, Lieutenant Payal Gupta and Lt Commander Swathi P for example. Not only were the two there for 27-year-old Swathi when she was on the brink of frostbite, but they also learned baking and cooking from her. "All occasions, be it birthdays or anniversary, were celebrated on the vessel," says Swathi, the in-house baker who used to treat the rest of the crew to scrumptious croissants, buns, and cakes, and would whip up a variety of South Indian dishes.

The crew was trained under Captain Dilip Donde, the first Indian to circumnavigate the globe solo in 2010. Also, INSV Tarini is named after the famous Tara Tarini temple in Odisha

By the end of it all, the camaraderie of the crew became almost telepathic. "We started thinking along the same lines and completing each other's sentences. We truly turned into a team," says Swathi. And this team spirit saw them through all odds — both physical and emotional — and proved to us once again that women are as adept at sailing across the seas as men.