Ten years ago, when three women walked into Shabnam's one-roomed home here one afternoon, her six- and seven-year-old daughters, Sana and Shaima, were school dropouts. They were attending a nearby madrassa as the family could not afford their school uniforms. Back then, Shabnam did not know that the visit by the three women would change the lives of her daughters. They were teachers of Rasta, a newly-opened girls' school in the neighbourhood. They had only one request: "Please send your daughters to our school."

It is a request that has since brought hundreds of young Muslim girls into the fold of education. In this "disease and crime-infested village" on the edge of Delhi -- as the local media once described it -- with a large Muslim population and no girls-only school, Rasta's teachers went from door to door convincing parents to send their daughters to the school - which then charged only Rs 40 a month and provided free books and uniforms. For Sana and Shaima, who joined in the same class despite the difference in their ages, it was a decision that has paid off.

"Now they can read names of buses, government documents; my daughters are cleverer than us," a beaming Shabnam told. From a modest beginning, the school now boasts of around 600 students (of whom 70 percent are Muslims), online classes, and a pass percentage of 85 percent for Class X.On a recent winter morning, 17 girls sat on wooden benches and a chorus of "Yes, ma'am", "No ma'am" could be heard in the Grade X classroom, painted a bright yellow and orange. A decade after she joined the school, the roadside biriyani-seller's daughter Sana - now 16 and her teacher's "best student" - will write her Class X exam in a couple of months and she dreams of becoming a teacher one day. One step ahead: The school was recognised by the Uttar Pradesh government in 2015 | IANS

And she is clear that education has helped her "become independent". Her sister, Shaima, who earned a "double promotion", has moved on to another school nearby and is in Class XI today. Seated next to Sana in her class are Saima, 18, and Rukaiyya, 17 - both confident enough to articulate their dreams. "I can talk to anyone now. I'm not afraid to go anywhere," said Saima, while Rukaiyya believes that, because she is now educated, her children will be better off. All three girls had dropped out of school and, like many others, were brought back to school by Rasta. Though well-established now, Rasta had an accidental beginning -- a challenge between two old friends over cups of hot tea on a cold Delhi afternoon in January 2007.

"A friend asked me, as a challenge, whether I could teach Muslim girls -- and I said yes," recalled K.C. Pant, 58, founder of the school, sitting in a crammed office room at Rasta School. Pant, who has about three decades of experience in the field of education, said that Khoda was an obvious choice and he worked fast to set up the school. By mid-February that year, Rasta started by providing informal education to about 250 students in four different locations in Khoda, each with two to three classrooms. In 2015, the school was recognised by the Uttar Pradesh government and now it operates out of a single building.

But Pant recalled that things were not easy in those early days. He and others had to go to madrassas and mosques, convincing religious leaders to send girls to school. "They were not used to sending their daughters to school. Maybe their sons, but not daughters." There has, however, been a major shift in the attitude of locals, he said. And the girls know that they have benefitted immensely. Manju Joshi, 41, a Hindi teacher at the school, said that some of the students go on to get a degree. "Some of them return to visit the school -- and they come and hug us," she said with a smile. 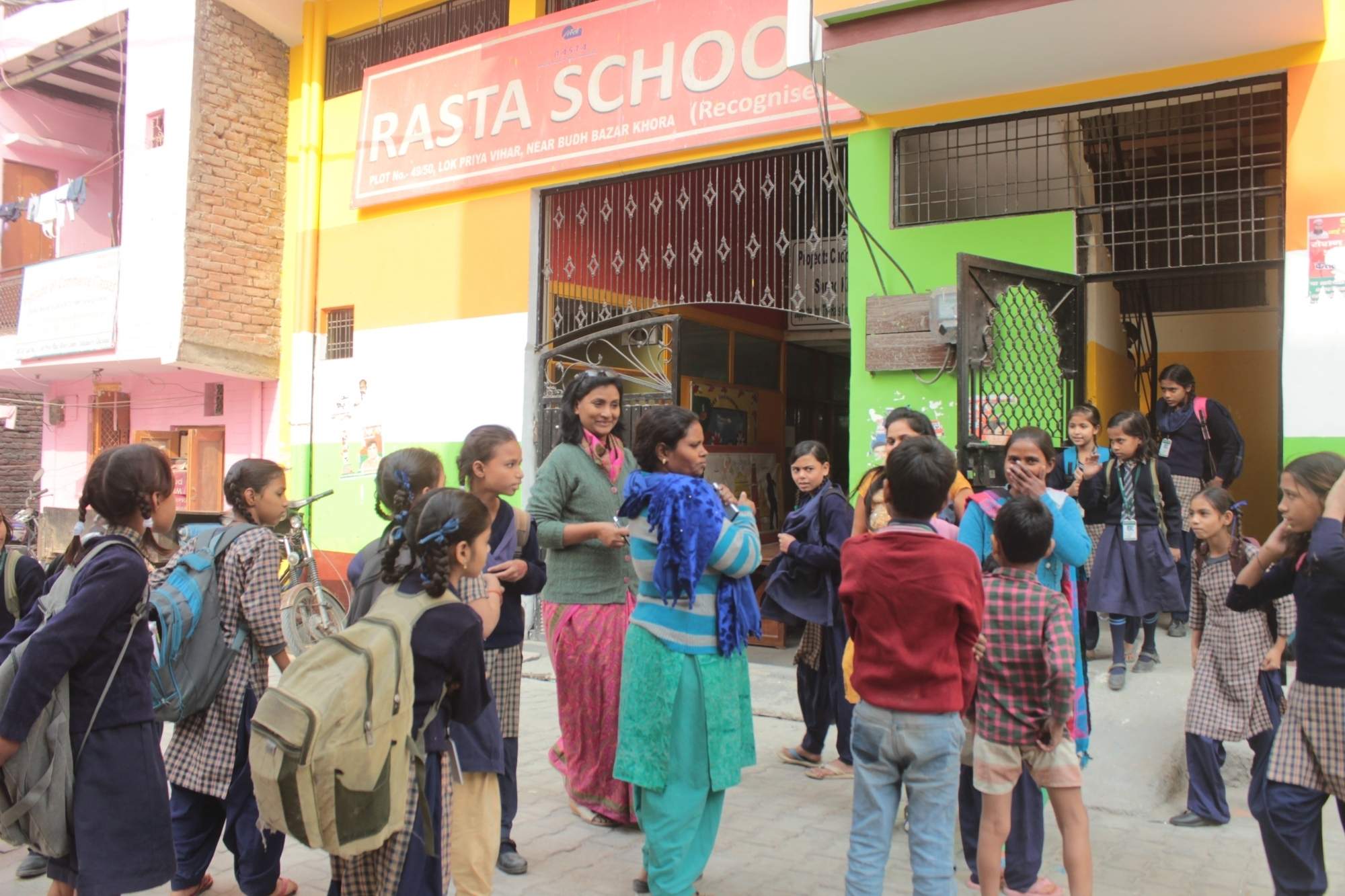 You go-girl: Rasta has shown a pass percentage of 85 percent for Class X in recent time | IANS

"Two years back, a girl delayed her marriage as she wanted to study more. For a Muslim girl from a poor background, it is a big achievement," said Vinita Singh, the school's principal. Another Shabnam - Shabnam Ansari, 45 - also has two daughters studying at Rasta. But her reason for sending them to school was different. "These days even the groom asks 'How much did the girl study?'" she noted. "Father also puts thumb impression on paper, the mother also puts thumb impression on paper -- will the children also do that?" she asked. "What happened to us shouldn't happen to them." Pant, however, believes that there is still a long way to go. And that is evident at Sana's house, where her father Arif, the biriyani-seller, said: "What will she do after studying? Anyway, we won't let her do a job. Class X is enough. Now let her do household work.

The fee has also increased to Rs 300 and I don't have money." "What will people say if we send her for a job?" asked her mother Shabana. She also complained that Sana only does school activities and not religious ones.Their education has, however, had its impact on the girls. "Even if it's through open school, I want to continue my studies," Sana said, adding: "I want to go to college." "Now she'll also say that she wants to go for a job," Shabnam said with a laugh. "We are not going to allow her."But even with her parents around, Sana said with quiet determination, without looking at them: "I WANT to get a job."