Meet Kerala's Mini Augustine, the oldest woman to 'bullet' up the Himalayas in a Classic 500

Fifty one-year-old Mini Augustine had just returned home after a pothole-ridden nightmare-of-a-ride to Koombara, a locality that’s an hour and a half away from her home in Kozhikode when we caught up with her. A bank employee by day and killer motorcycle rider by night, she admits that her journey towards acceptance was just as rocky. But nothing seems to get in Mini's way as she gushes about her motorcycle journey to the Himalayas and her love for her Royal Enfield Classic 500. Excerpts:

When did you first discover your love for riding?

I grew up in a time when people did not ride a lot of bikes. From what I had seen in the movies, it was something that a villain used and I had no particular interest in them. At the time, I used to ride a Luna scooter, the only two-wheeler in the market, and I used to love it because of the independence that came with it — I could go anywhere without depending on anyone. Then at the age of 27, I found that love again when my husband taught me how to ride a bike — an old Royal Enfield Bullet 350. I literally fell in love with it and decided to buy one of my own, a Suzuki Samurai. What I loved was the thrill of being on the road and being noticed by others. You make heads turn, whether its you under the helmet or not.

Were there people who questioned you?

A few conservative male colleagues would try to counsel me. These people believed that women were only meant to stay at home and looked at me like I was a rebel. A few of them gathered the courage to tell me that I must stop riding because it would 'make my uterus come down’ (she chuckles). This was just a few months before I gave birth to my second child and I wanted to show them just how wrong they are about so many things. 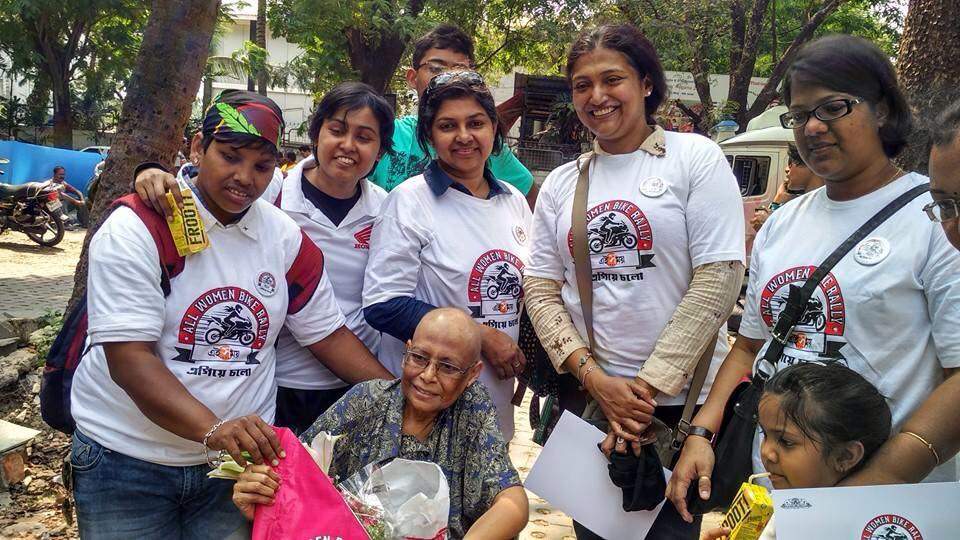 Motorcycle diaries: Mini with a few other female motorcycle riders

When did you start doing long rides?

I had travelled short distances of 100 to 150 kilometres to Bhutan and Nainital from Kolkata, where I discovered several riding groups. What was just a necessity until that time, grew into a passion around these people. This July, I was inspired to ride to Leh in the Himalayas. My age was a very big factor for me, so I decided to take a year off to get physically fit and regain whatever I could. I joined the Royal Enfield Himalayan Odyssey.

How has the experience changed you?

I didn't see anyone of my age group in my team; most of the people with me did not have to deal with the same problems that I had. Initially, I hadn't thought too much about the path, only the destination. I knew that there would be river crossings and off-roads, but the actual experience was like going through hell and knowing that there were more ahead was really frightening. There were stretches that were entirely off-road through miserable and cold conditions. One day, we returned to Keylong in Himachal Pradesh and I was totally broken, questioning my decisions. As I went on, I slowly gathered the composure that was necessary to go on. Keeping my bike running and not falling down were the only two things I needed to focus on. But as difficult as it was, I learnt many things from that ride, there are journeys I couldn't have made today if I hadn't finished that one.

Was there a moment when you realised that it was all worth it?

After a particularly harrowing day, I remember calling my husband and crying, saying that I couldn't go on. Without oxygen, my mind almost went crazy. I kept calling him because I needed the support that I wasn't getting from my fellow riders. He told me that I could not quit and that I owed it to myself to keep moving forward. After that, he would send me these motivational messages from wherever he was, without fail. When my mind was taken care of, the rest followed on its own.