Lessons from 2015 Chennai floods: IIT-M students build makeshift houses that can be folded in a box

The floods of 2015 in Chennai was a moment that shook the city to its core. At the IIT Madras, a group of students used the floods as a learning opportunity to fine tune a design for making strong, foldable and easily portable shelters to house people who were in great distress, as those during the floods.

The fourth-year civil engineering students have already built a prototype of the temporary shelters. Explaining the technical bit about the about their modular housing project Gopinath P, says, "The prototype is built on the 'Telescopic principal'. Just like a telescope can be folded and made bigger or smaller, so is our shelter. It has a dimension of a 400 sq foot area and can be folded into a 5x5 box," adds Gopinath.

Their idea won the Azim Premji University’s National level Social enterprise Idea challenge that took place in the city recently. They won a cash prize of Rs 35,000 for their project and made a number of industry connections. 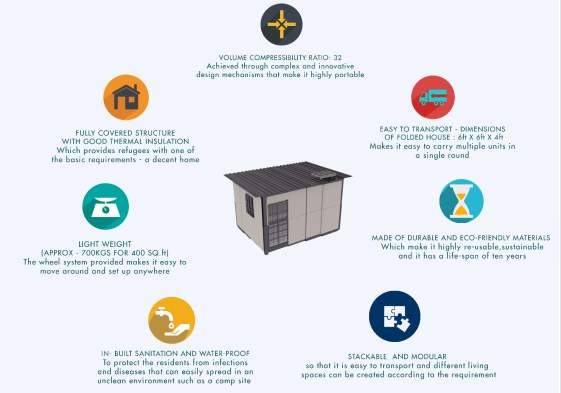 How it works: A picture-guide to the features of the '400-sq-ft home built in box' concept

The prototype also has inbuilt facilities such as restrooms, power, water and heating connections (that can be run with external power sources).  "It is also very easy to set up the shelter and transport it. We are also trying to integrate solar power systems," adds Gopinath.

Made of steel and aluminium, Gopinath says that it is more durable than the simple tents that are usually installed as shelters during situations of disasters and for refugees. The modular housing aims at providing better shelters during such situations, says Gopinath. "Our shelter lasts for around 15 years and can house four families at one time. Each unit costs Rs 2.5 lakh. Temporary tents last for a very short time and need to be set up more than one time. In that sense our shelters are more economical," he adds. They are also planning to make these structures available to national and international organizations like NGOs and government bodies so that they reach the people in need.

The students plan to set up a startup around the idea and are also part of the incubation programme of their institute.