Meet Ayush, an autistic Zentangle artist who is good at creating hope with just paper, pen and few colours

At 18, this prolific young artist is not one for words but rather of colours and waves, shapes and corners. His work is full of painstakingly crafted detail. Ayush Bhambani can spend hours on his work but he is equally interested in music, food, games and anything else a teenager would enjoy. He was the featured artist in ‘Shards of Brilliance’ – an exhibition held in 2014 that earned rave reviews and ended up with 80 percent of his work being sold. He prefers to work with pens on textured paper and is a student at the Sense Kaleidoscopes Vocational Centre in Bengaluru.

Speaking with the City Express, Preeti Savur, mother of Ayush, says, "Ayush was diagnosed with an autism spectrum disorder more than twelve years ago and I will never forget that moment sitting and waiting post the tests when the doctor re-entered the room after a lengthy, grueling exam." Life changed forever for Preeti and her family, in that single moment. "It’s been quite a journey with many highs and lows, joys and frustrations, hopes and fears, laughter and tears," she adds. 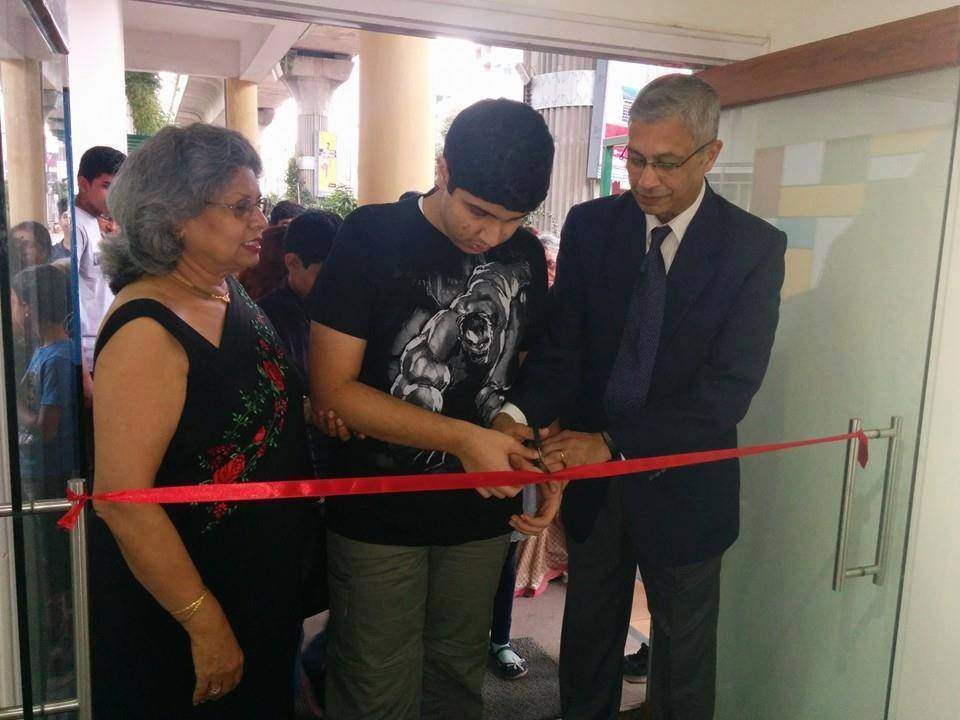 One big step: Ayush Bhambani had recently launched his own website

But the Bhambani’s didn’t lose hope. After Ayush’s diagnosis, they went through the typical stages of grief. Preeti says, ‘It’s heartbreaking to watch your child struggle. When my husband Anil and I began our journey as autism parents, every single little thing felt like a battle, from making simple everyday choices without meltdowns to navigating large, overwhelming family functions." At the time of diagnosis, Ayush had no voice so Preeti was her son's voice.

Ayush is a solo artist now and he specializes in Zentangle form of art which is an easy-to-learn, relaxing, and fun way to create beautiful images by drawing structured patterns. Talking about his journey in this field of art, Preeti says, "When he was in 9th grade we thought academics is not for him. He couldn’t cope with it." During this time Preeti read an article about Akshayee Shetty who helps autistic children to channelize their passion into productive and creative activities. He has since founded Ayathi Trust that helps autistic children Ayush was good with computers and loved to play games and spend half of his time on the internet. His parents thought he can get into animation. "He, however, didn’t like it at all,’ Preeti adds, ‘Ayush loved to play with textures and sometimes he would play with fevicol. This was when Ayush was introduced to Ayush.

That was the time Ayush picked up the art and tried forms, shapes and lines to express his emotions. Akshayee, Ayush’s mentor says, "Ayush’s journey has been incredible and fascinating. His report suggested that he has limited comprehension, communication problem and many other challenges. A boy who couldn’t use a pencil is now doing wonders in painting." Initially, Ayush had problems but he was introduced to sensory skills which helped him to get accustomed with the art. He began to thoroughly channelise his talent and started drawing hand series, autos, bus, his dogs in form of Zentangle.

"No one in our family knows drawing and this is totally incredible and surprising to see ayush develop this inherent talent of painting," says a proud Preeti. Ayush’s paintings were put up for an exhibition in 2014 at the MG road metro station boulevard and it was sold out. "

Advising parents who have an autistic child, Preethi says, "Autism is not a disability. It does not diminish a person as a human being. Autism awareness can't stop with a list of things that make people with autism different." She adds that autism helped shift her and her family's perspective and reach a place of happiness and contentment