Ridding a slum of drunkards and raising bookworms, this Chennai duo's library has turned pages in the lives of many

While many were doubtful if the kids would make use of the space, they responded with enthusiasm and a thirst for knowledge, one that has now even spread to some tipplers in the area

Manoeuvring my car through a few narrow lanes in Mogappair East, Chennai, I was hoping that I wouldn’t scratch my car or run over any of the colourful pots that the women of Padi Kuppam had placed beside the corporation water tank. Not that I’m a bad driver, but I was engrossed in the story that Balaji Premkumar was narrating while we were on our way to the slum (I’ll tell you the story behind this in just a bit). A few minutes later (and not a scratch on the car), there we were, in front of a small cemented building with an asbestos roof.

As we got out of the car, we were welcomed by a group of little girls and boys. With a smile on their face and backpacks on, they entered the building. Balaji and I followed. It was a tiny room with shady lighting. But there were racks of books, neatly arranged. The little ones pulled up their chairs and got ready for their classes. That was one of the most wonderful sights I had seen by far. This tiny library, called Abdul Kalam Arivagam is an initiative by Balaji Premkumar and Jagadheeswaran Dhakshinamoorthy. 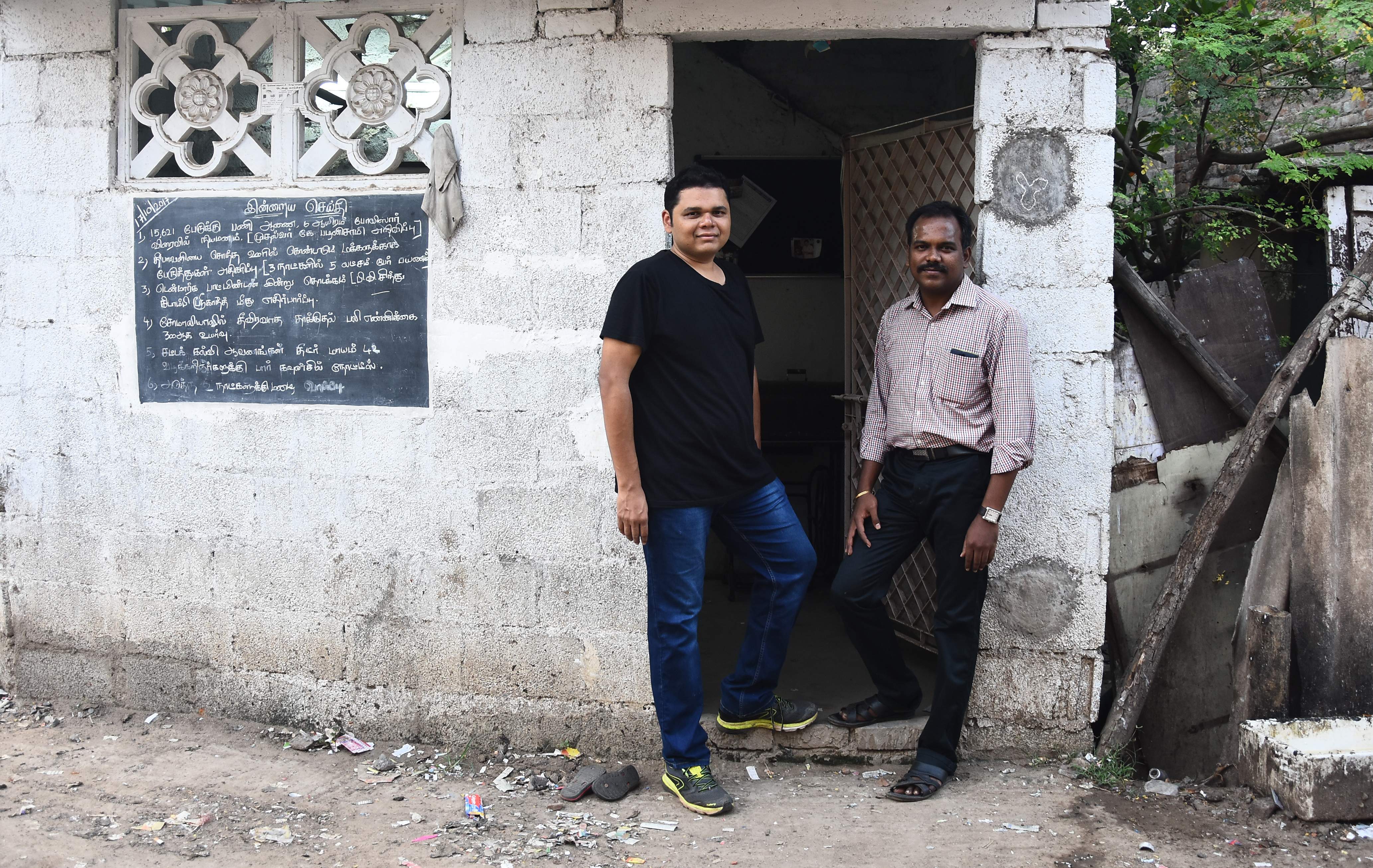 Call for Change: The duo have given kids and the slum a new lease of life

Now, why would these two social workers set up a library here of all places? Here is the story that I promised! “We found this place during the 2015 Chennai floods. It was completely ruined and we were rehabilitating people from the area. Most of the men in the area are drunkards, enabled by the nearby TASMAC and the women work as household help. But they struggle to make both ends meet,” narrates Balaji. In the midst of all of it, the children and their right to education were the most affected.

When it came time to repurpose the space, the duo thought of converting the building, which was once a drinking club for the local men, into a library. “People were initially doubtful if the children would make use of it. But the kids loved it. They started borrowing books and turning up for tuitions,” says Jagadheeswaran. Step by step, it progressed. They got books, newspapers and computers for the children. Inspired by their work, the local youngsters started volunteering to take classes. “It all started with a student of mine, Veera, taking up classes. I coach him for the civil services examination. The youngsters here really want to carve a niche for themselves and have a better life,” says Balaji, who is also a civil services examination coach.

Right now, the duo is happy and the centre is self-sustained. A group of enthusiastic students attend classes every-day and the other lot are always there to help them out, along with Balaji and Jagadheeswaran. Also, the TASMAC doesn’t exist anymore and many people have given up drinking. In fact, a few of them are now regular visitors at the library. That’s a whole lot of change!