Paging Doctor Cool: This MBBS student from SRMC runs a restro cafe in Chennai and we love the way it looks

Jaykiran had always been passionate about food, but he had no idea that his passion would drive him to start a café that’s been stealing the hearts of the youth in Chennai

Jaykiran Palaniswamy, fondly known as Jack, has always been a big foodie. “As a child, whenever my mother wasn’t around, I used to cook for my father and sister. I always loved food, be it trying out different cuisines or experimenting with new dishes,” the 21-year-old says, adding, “Medicine is my profession and food is my passion, I love them both and I can’t stop pursuing either one of them.” Jack, who is an MBBS student at Sri Ramachandra Medical College, Chennai, initially started a small business with a friend during his second year of college. They had set-up a panipuri stall outside his father’s restaurant. “I kept the relationship between my father and I as professional as I could. I even paid him rent for space,” he says. Though his first venture was a success, unfortunately, he had to shut it down. Life's food: Jack plans to open more cafés in future and says that his vision is to bring fusion food from all over the country to Chennai

But Jack didn’t give up. On one of his vacations to Singapore, he came upon the concept of rolled ice cream and was immediately impressed. “As soon as I saw the concept, I fell in love with it and I wanted to bring it to Chennai.” But he soon found out that opening a rolled ice cream parlour wasn’t an easy task as there was a lot of research involved. “Since we didn’t have the appropriate machines readily available here, I did my research on the machine and the parts required for it, and had it made here,” says Jack, and that’s how Scroll Ice Cream in Besant Nagar came into existence in June 2016.

The ice cream parlour was an instant hit and garnered a tremendous response but he was forced to shut that down as well, but not due to the lack of business. Despite this setback, Jack didn’t give up. It was somewhere around this time that he heard about a space that was available in Nungambakkam. He decided to pursue it and open another ice cream parlour there. “Initially, my father was skeptical about my plan and didn’t come along for any of the meetings. It was only after my continuous persuasion that he decided to invest in my project,” states Jack. 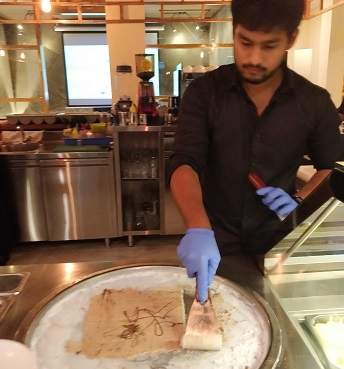 Core authority: Each and every employee that works there has been personally interviewed and selected by Jack himself

Though, at first, he had his heart set on an ice cream parlour, as time passed, he realised that he wanted more. “I did extensive research and came up with the idea of opening a café,” he says. The café, that goes by the name Jack’s Resto Café, has become quite popular among the youngsters. When asked about the concept of Netflix in the café, Jack says, “The growing trend of English sitcoms among students was the inspiration behind this concept, and I also wanted people to have a place to chill and feel like home.” He calls the concept an ‘island concept’ because the heart of the café, the dessert bar, is located smack-bang in the middle.

Also, each and every employee that works there has been personally interviewed and selected by Jack himself. “Since I was new to the business and I wanted to ensure that my customers got authentic food, I researched every dish that was on the menu and learnt how to make it before hiring the chef,” he says. Talking about what makes the resto café stand out, Jack says, “The things that we use in our café are of the highest quality. I make sure that only the best quality of ingredients are used. The machinery is imported from Germany and I personally select where the ingredients come from,” he says, adding, “Also, the Netflix lounge makes the café different.”

When I’m in college, my hospital timings become very uncertain. To ensure that thecafé is working properly, I keep tabs on it through the cameras

When asked about the challenges that he has faced, he says, “I would be lying if I said that managing college and the café isn’t difficult. My schedule becomes very hectic, but I feel that anyone who is passionate enough and is a hundred per cent clear about what they want, can achieve anything.” Jack adds that his father’s trust in his venture is his biggest accomplishment till date. He makes sure that he monitors the café regularly and has installed CCTV cameras to help him do this. “When I’m in college, my hospital timings become very uncertain. To ensure that the café is working properly, I keep tabs on it through the cameras,” he explains.

Jack plans to open more cafés in the future and says that his vision is to bring fusion food from all over the country to Chennai. He admits that his friends and family often worry about him overworking, but hey, good things take time and effort.