The scrap collector: This Kashmiri dropout is the saviour of Srinagar's polluted lakes

Bilal was also made the ambassador of Srinagar Municipal Corporation and tasked with bringing attention and awareness to the city's spoiling lakes, including the Dal lake

A boat drifts on the Wular lake- Asia's largest freshwater lake- and the water ripples as a young hand deftly picks up scrap- bottles, metals, plastic etc. As the Shikhara passes, the veil of dirt lifts leaving a vaguely pristine and clean body behind. Bilal Ahmad Dar does not go to school like other boys his age. He had to sacrifice his schoolbag when his father, Muhammad Ramzan, died five years ago leaving him to care of his mother and two sisters. Fate forced Bilal to make a fortune- what little he could- by collecting refuse and trash from Wular Lake and selling it to scrap buyers. His efforts were, however, noticed by the local corporation that pays him an honorary amount of Rs 8,000 for his effort.

An ugly turn but a mission that even the government is yet to do, Bilal has cleaned lake which is the community's lifeline. "Wular Lake is our life. I have always been pained to see people leaving behind metallic, plastic and other waste while they come here for sightseeing. Even when my father was alive, I used to go to the bank of the lake and try to remove unhealthy waste left there. When my father died, I had no option but to give up my studies and start earning for myself and my family," he says.

"I decided to make a living by chasing my passion to preserve the lake on whose banks I was born and brought up," said Bilal. The small, apparently unnoticed effort was lauded by Prime Minister Narendra Modi, who praised Bilal and his efforts to clean the pristine lake in his "Mann Ki Baat" address to the nation.

Prompted by Modi's mention, the Srinagar Municipal Corporation designated Bilal as its brand ambassador to attract attention towards the deteriorating condition of the Dal Lake in Srinagar city and other water bodies here. The municipality has fixed a monthly honorarium of Rs 8,000 for Bilal to continue his work. "The first 'Tankha' (salary) was credited to my account last month. I am now able to live a better life and pursue my work more effectively. Other boys and even elderly people have been encouraged to do their bit regarding the cleaning of the lake. 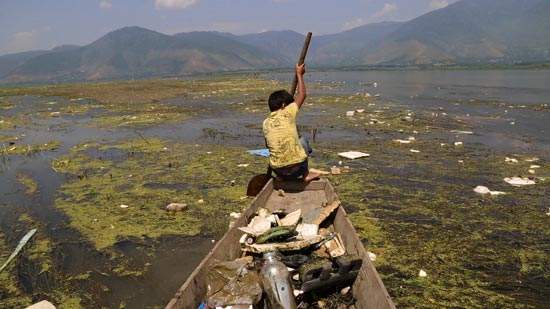 Bilal said, "I did not know about the development till officials and media people came to our village. It is really encouraging that the Prime Minister made a mention of my work. "This has created a huge difference in my life. I would earn around a hundred rupees daily by selling the scrap collected from the lake, but that income depended on good weather and other factors which are necessary before one rows his boat into the lake."


He says it is not possible to clear everything through an individual effort. "My first request to everybody living around or coming to visit the lake is not to leave behind waste either on the lake's banks or in it. He adds that after the pledge is taken, the waste must be removed in soldiarity.

"Carcasses of animals can also be seen floating on the lake these days. It is the same lake whose water my mother says people could drink directly in the past without any fear of getting sick," he pointed out. The instant recognition of his effort at the highest level has made a difference in Bilal's life and the teenager feels this could one day change and better the environment and ecology of the lake on whose banks he was born.

"I am now confident everybody, big or small, will contribute to help Wular Lake regain its lost glory. The least all of us can do is to stop polluting the water bodies around us. If our rivers and lakes die, how can Kashmir live?" asked Bilal before heading out to the lake.