Art evolves through time and is probably the best way to portray history. But India has been losing its age-old art forms one piece at a time over the past few decades. A major portion of Gen-Y does not even know the names of half the art forms in their own region. Bhuli is here to change that. Founded by fashion designer Tanya Kotnala in 2017, Bhuli, which means little sister in Garhwali, aspires to resurrect the art of Uttarakhand and their Instagram page is proof of that.

Kotnala, now 27 years old, graduated from National Institute of Fashion Technology (NIFT) Shillong in 2015 and went on to work for the Ministry of Textiles in Meghalaya and Assam for the next two years. When she came back to Uttarakhand, her home state, she wanted to explore native art forms and that's how Bhuli was born. "We started working with the anganwadis on illustrations that spread awareness on issues like anaemia and breastfeeding. I was the illustrator while my co-founder Tanya Singh wrote the content," said Kotnala. Though the duo formed the enterprise, they have parted ways. Singh, a nutritionist by profession, is no longer a part of Bhuli, said Kotnala. 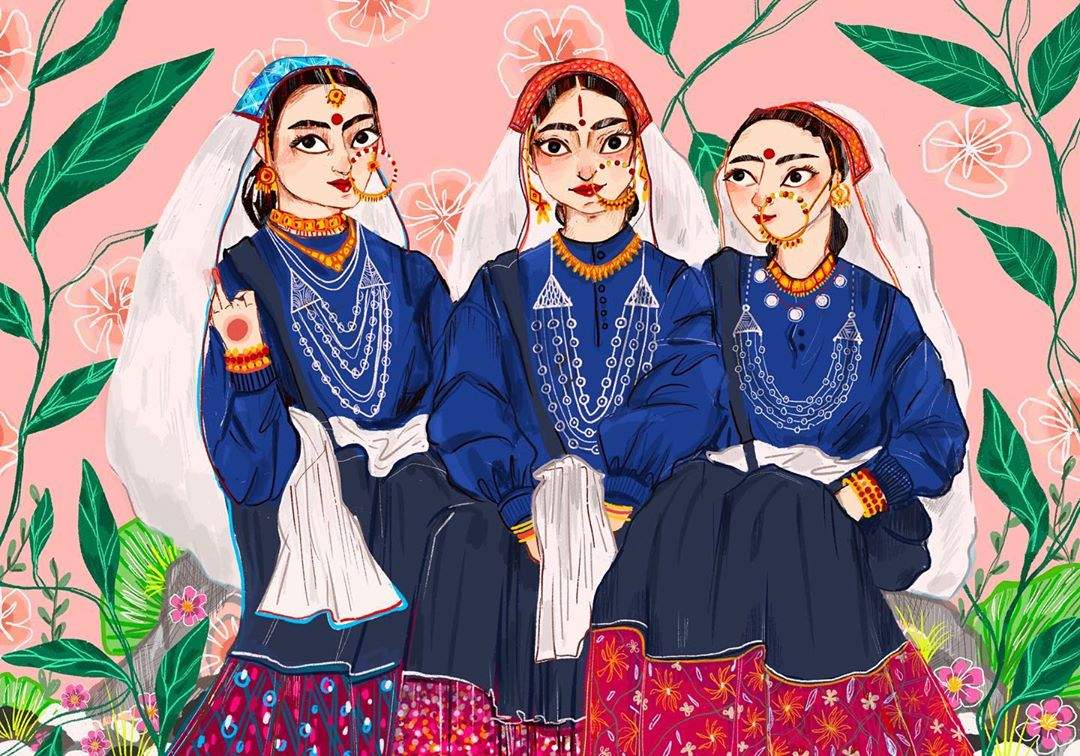 Kotnala was always interested in the art side of fashion than the glamour of the professions and when she came back to Uttarakhand, working on the Pahari School of Painting of the state seemed like a natural progression of her work. "Mughal miniatures form a huge part of the Pahari School and so does, Aipan, a floor and wall art form, similar yet very different from Kollam in the south of India or Alpana in Bengal. Aipan had its own motifs — it is inspired by the mountains and the state's flora and fauna which makes it stand out from the rest. The tantric motifs of Aipan really fascinated me and I started to work on that. We have organised online events of Aipan Art which also had fusion categories where the artist takes inspiration from the traditional art form but improvises. This is important as the art is losing its importance or charm among its own people. The locals do not appreciate the art as much as someone from outside does," she said. "The work is not profitable anymore. But the women have taken it up quite well. They form Self Help Groups and work with them on a part-time basis," added Kotanala, who recently shifted to Jalandhar after she tied the knot last year.

But social media has helped Bhuli connect with a diverse set of people — from 16-year-olds to 60-year-olds. "The youth is trying to get back in touch with the art. I receive a lot of messages from the youth who are now very much interested in the art form. This gives one the hope that with the proper incentive the art form can be revived. I would love to collaborate with the government on this but, as of now, most of the online projects are self-initiated. I keep hosting Aipan contests on my Instagram. I got an entry from a 63-year-old woman and a 16-year-old as well. It is fascinating how these two generations look at the same thing," she said. What is noticeable from Bhuli's art feed on Instagram is that Kotnala has not only focused on the traditional art forms but every picture has a message too. "I came up with my Aipan Series in 2019 where I tried to draw about events very close to the state, like the Chipko Movement. That received a lot of love and support from people," she added.

Bhuli has published illustrations on everything from the environment to triple talaq but their series on nutrition that took you back to 'memories of food' stood out. "I am fascinated when two different concepts merge together to become something. Tanya (Singh) had the idea of bringing in the concept of memory of childhood comfort food. We launched it around World Nutrition week in August and we were featured in the Food Network, USA. It had a huge impact," said Kotnala. Going forward, Kotnala wants to revive the art forms of Uttarakhand by bringing in textiles into the picture — everything from saris to dresses to bags. "I want to work with local artisans more. There are a lot of challenges in Uttarakhand as resources are scattered and the COVID pandemic has made it even worse," added Kotnala.