The development sector is in India has no dearth of stories  but a lot of them go unheard. Those are the stories that researchers Samyuktha Varma and Radhika Viswanathan will tell you through their multiple podcasts. The duo started out in 2017 with their podcast In The Field and is currently airing their third show Kaalavastha.

Having worked in the non-profit sector for years, Radhika and Samyuktha tell us that there was only one-way communication happening in the sector, mostly through brochures and posters, about their projects and programmes. "There were a lot of stories that weren't getting captured or told. That was part of the inspiration to start our podcasts," says Samyuktha. Their first podcast In The Field piloted in October 2017. "We are also quite research-driven and are looking for a way to link theory and practice in this field. We also wanted to introduce people to how this happens," she says. Radhika agrees. "It was important for us to have conversations about this. In India, there is a lot of work going on in this field, but very little conversation happens," she says.

Three years ago, both of them did not have any experience producing podcasts. However, they say that they've never had a disagreement while choosing a platform to tell these stories. "We really wanted to make podcasts. There's a lot of content on all other platforms, but we wanted to give this a shot. The medium offers a lot of intimacy, it is quite gentle and doesn't rile you up," she says. "We spent a lot of time engineering this. Our research background helped us lay out a plan to get this done," she adds. The idea for the podcast, Radhika says, came up naturally over a course of many conversations. "When you're working in this sector, you're prone to a lot of great informal conversations. People are debating, talking and thinking all the time. We were talking about this for a while before actually making podcasts," she says. 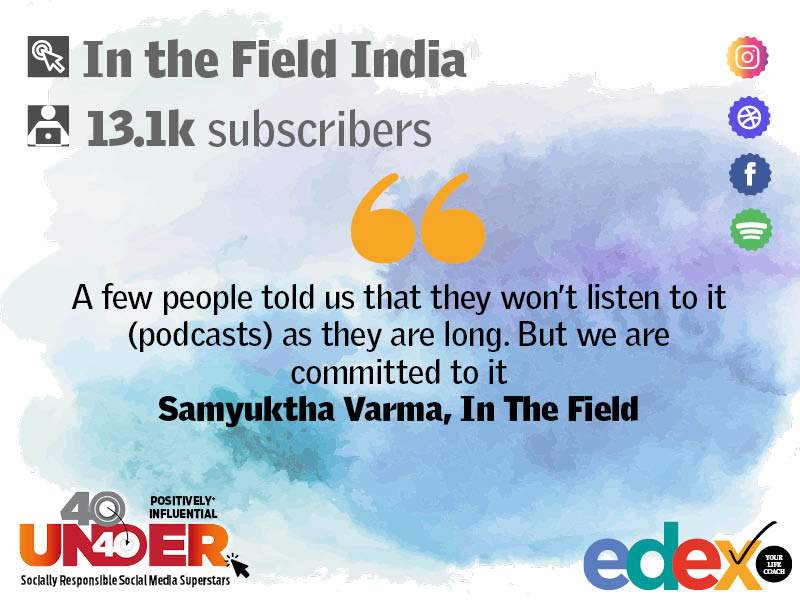 The duo admits that they take 'a long time' to produce their podcasts. And when they are not airing podcasts, they are busy making one. "It is difficult to quantify the time that we put in. Some stories are easy to narrate, some are difficult. We tend to take a long time," says Samyuktha. "Audio production is a time and labour-intensive medium. It cannot happen very quickly. Some of our topics have taken months," she adds.

Their first episode titled 'If you eat egg, your child will be bald' spoke about nutrition and stunted growth among children. After touching upon topics that included job loss and falling female workforce in the first season, they went on to produce its second season. Currently, they are airing a podcast named Kaalavastha, on Kerala. "An episode of In The Field took a look at the Kerala development model which is a well-established model. Some of our listeners in the World Bank loved it and reached out to us just before the floods and asked if we could work with them for a series. We had also worked on environment-related topics in the past. So, we were pretty interested in doing a show with a climate change take on it," says Radhika.