Shilpa Mudbi Kothakota who has been performing the folk music of Jogathis across Karnataka speaks about her initiative, Urban Folk Project and what she plans to do in Kalaburgi for the community

When we talk about culture and traditions of India, folk music and dance plays an important role. Shilpa Mudbi Kothakota, whose brainchild is the Urban Folk Project, is keeping these almost forgotten art forms alive for a whole other generation using the power of social media.

Shilpa, who was recently appointed as the member of Janapada Academy, not just practices the folk music of Jogathis in North Karnataka, but breathes it every day.  In fact, the Urban Folk Project was launched in 2017 to study the jogathis and the forms of music attached to their culture. Narrating the story of their deity Yallamma or Renuka Devi through her performances, Shilpa is connecting the world with the jogathi community who are otherwise not given much air time.

We speak to Shilpa to trace her journey and what she plans to do having shifted from a metro city like Bengaluru to a small town, Kalaburgi. Excerpts: Can you tell us when the Urban Folk Project started and the idea behind it?
The Urban Folk Project is not a very old one. Three years ago, when I was working with a French Tamil theatre company, there was a play that required me to device a deity who would take in all the victims of war. I devised the character of Yellamma using Yellammanaata, whom I had seen in plays when I was a child, as a reference. My husband and I travelled to Savadatti in Belagavi to clear the confusions, whether they were political, artistic or geographical. While we kept going to different places on holidays, the thought of moving out of Bengaluru came only when we started going deeper to understand the lives of Jogathis. Since my father comes from Mudbi in Bidar district, I felt that I have to settle in this region. A lot of folk songs that people have seen me live streaming on Facebook were taught by my parents and grandmother.

Coming back to Urban Folk Project, it started when we did our first production in 2017. While the actual play or Yellammanaata is for 10 hours, we produced only one chapter which ran for about 20 minutes. In this show, we used the idea of crossdressing to focus more on inclusivity, gender equality and how actors' bodies change with the crossdressing. Our idea is to facilitate the community and the future generation with this art and make them feel proud of themselves. Yellammanaata is mostly perceived or thought to be done by beggars or women who are devadasis or abandoned by their families. That's why I launched the Urban Folk Project. 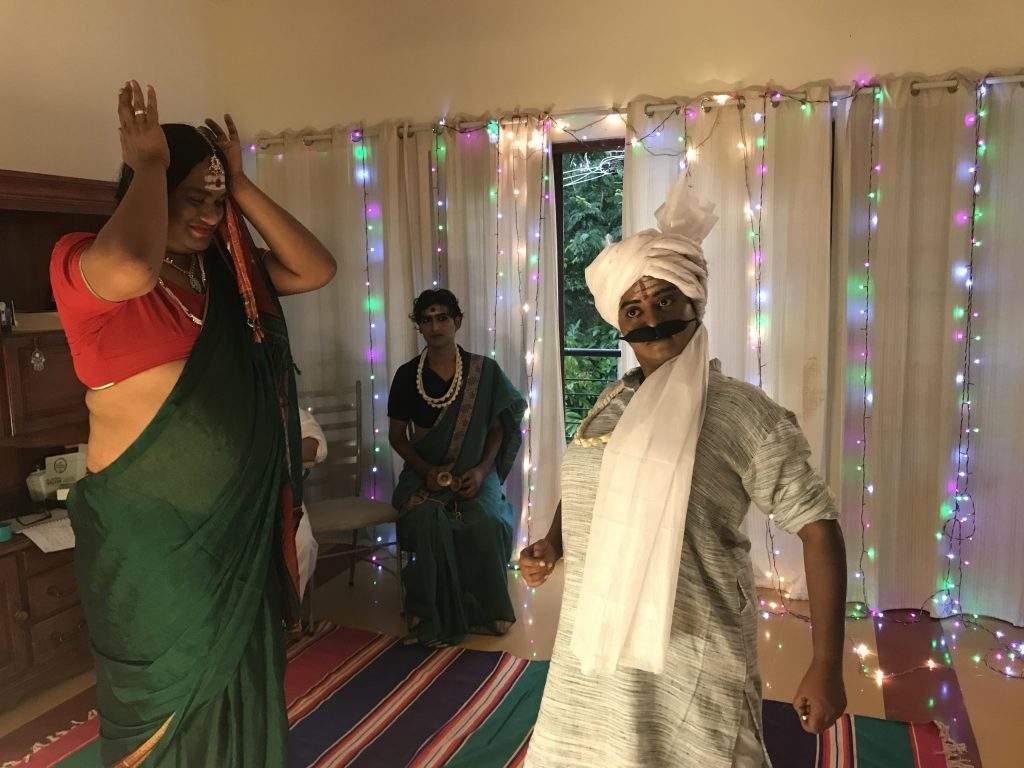 Mainstreaming the folk art is all that Shilpa intends to do | Picture Credit: Adithya Kothakota

What are the different music instruments you have learnt to play during the performance?
We have learnt playing the choudki and tuntuni so far but we are also in the process of playing the jhanj and the daf. The jhanj and daf are used when we sing Geegi padha. There are different instruments that the jogathi use when they perform different forms of songs. Usually, choudki is used when they sing choudki padha. Choudki is a rhythmic musical instrument with a single string tied to an open drum. Jhanj is another percussion instrument used for proper taala and it is mostly used in pairs. There are many more forms of folk music when it comes to Yellamanatta but Choudki and Geegi are the two forms that I have been interested in and am currently learning.

The interesting part of our learning leads to our discovering these instruments. It was during our research that we went to Haveri University and met a professor who introduced us to the most famous Jogathi folk artists called Radha Bai and Manjamma Aayee. In fact, Manjamma is someone who needs no introduction because she has won many states as well as national awards for her contribution towards this folk art. They were the one who introduced these instruments to us. It was after meeting these people that I realised that Jogathi folk songs which is supposed to be one of the popular cultures are sidelined by the mainstream culture. 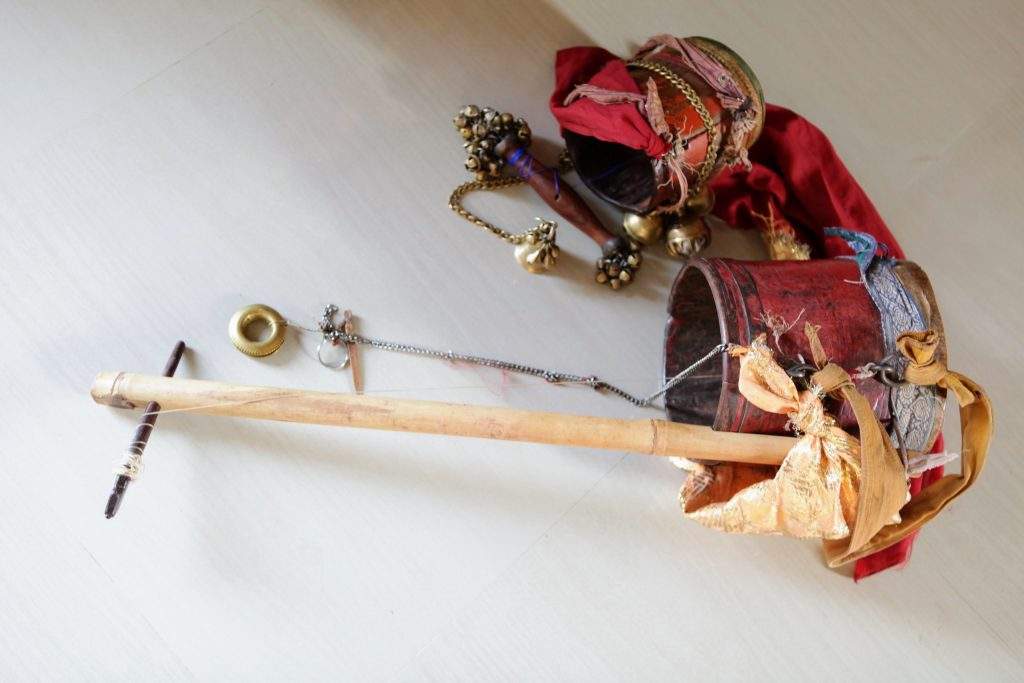 What was the reason behind moving from Bengaluru to Kalaburgi?
We wanted to move to North Karnataka to continue studying jogathi and the devadasis in this belt. But before we decided to move to any part of North Karnataka, we thought of creating our own space to study them, conduct workshops and empower them. Aside from this, the musical instruments that jogathis use are very rare to find in Karnataka.  At some point, I want to develop an institution that teaches this art. A community that can come and work here without any hesitation. Therefore, we got a piece of agricultural land where we can set up a theatre space or our institution soon. 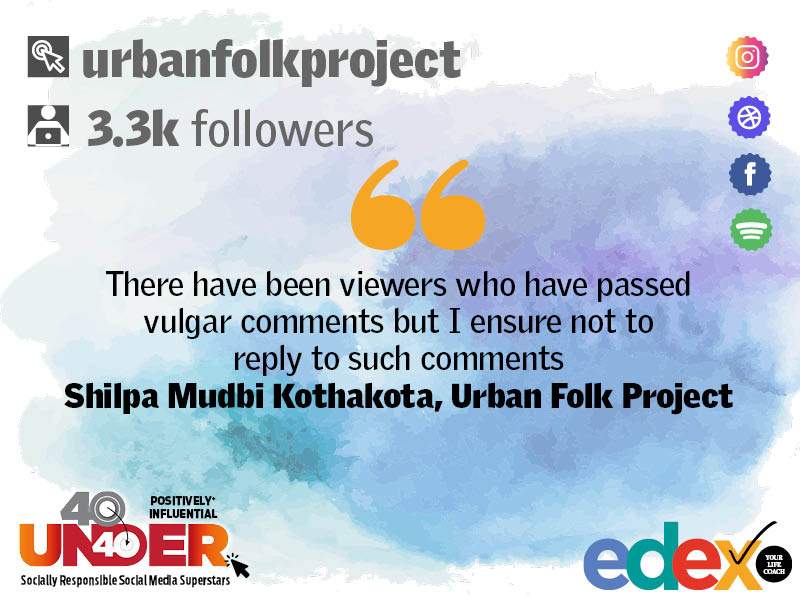 We know you have performed Yellammanaata in several places across Karnataka. But have there been instances when students or youngsters have come to express their happiness when they see you playing these folk songs?
There are so many parallel stories that we tell while we explain the deity's story to them. We also tell them stories of people like Radha Bai, Manjamma and many others. While a lot of students have thanked us for changing their perspective towards Jogathi and the songs they sing, people from other age groups also come and tell us how we remind them of the childhood days spent in rural areas and so on. Some of them who admire our performance design send us beautiful posters.

At the end of the story add this text in Italics: Edex and The New Indian Express have been curating the 40 Under Forty list since 2017. We featured collections of impactful grassroots teachers in 2017, innovative start-ups in 2018 and environmental impact-makers in 2019. All the people selected have been chosen after a careful process of editorial selection and nomination. Reach out to us at edexlive@gmail.com