With Blue Dawn, this 24-year-old is providing easy access to mental health facilities for Bahujan communities

"People in India sometimes don't even acknowledge that caste exists in India, forget bringing it into your therapy sessions," says Divya Kandukuri (24), who believes that mental health cannot be apolitical and has to be looked at through the caste angle in this country. With this very idea in mind, Divya set up Blue Dawn in 2018, a community support group that reaches out to Bahujans for support and makes mental health resources accessible to the marginalised sections.

Set up two years ago, Blue Dawn started off as an online Google email group to create a community/network where young people from SC/ST/OBC communities facing institutional discrimination could come and speak about their mental health issues. The idea of the community also stemmed from Divya's personal experiences of caste discrimination that she had faced at several junctures, which she did not want to speak about in detail. "When I faced such discriminations, I wasn't aware of the effects it could have on people's mental health or that we could do something about it. I knew how it felt but never thought it could have a long-term effect, traumatic to an extent where you can't function and thus, disrupt your daily routine. I researched and then I felt that while we fight institutional casteism, we should also come up with something to take care of each other during this fight, our well-being. There is also our own health, emotions that we need to nurture. The idea behind Blue Dawn is mainly that," explains the 24-year-old. 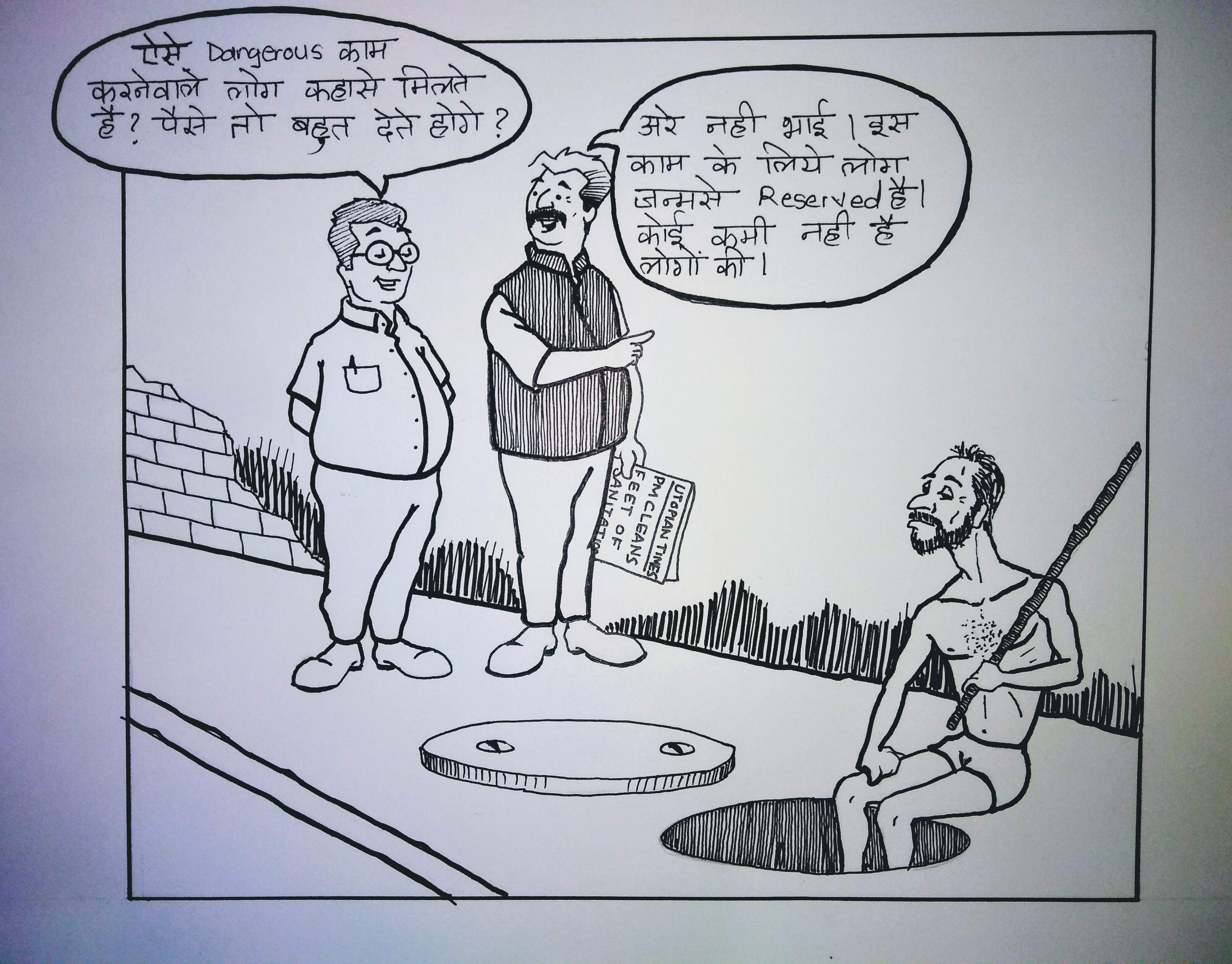 Along with two other core members, Pranjali Kureel and Kiran Valake, Blue Dawn was created as a safe space for people from similar backgrounds to come together, be there for each other and begin nurturing a sense of community. "The popular notion around mental health is that there is something inherently wrong with your body and mind. We, at Blue Dawn, are trying to disrupt that thought because we believe that is not what it is. Caste divide, patriarchy — such kinds of institutions/structures affect our mental health in numerous ways. We are not machines that have a mechanical issue or a loose screw that can be fixed, we are trying to disrupt that thought process. We are people who face these issues due to problems at the structural level," adds Divya. Soon after that, the team launched their social media channels and formed a WhatsApp group to make it more accessible, the process more seamless.

In their initial year, the team’s primary focus was facilitating sponsorships for therapy and connecting people to experts, psychologists and counsellors. Now, they have moved on to groundwork, engaging hands-on with different groups. "After the group became known to more people, we called out to psychologists, counsellors, mental health experts. We wanted people, including medical professionals, who identify themselves as 'anti-caste', 'anti-oppression' and understand structural issues, and believe in Ambedkarite values and are willing to offer affordable therapy, to reach out to us. We have a network of these experts now whom we trust," says Divya, explaining how Blue Dawn is addressing mental health challenges among Bahujans. "Even if you understand the concept of mental health, access to these services is lacking. There's a gap in terms of how some therapists function within their casteist bigotry and mindset, they come from their inherent prejudice. They do not want to or cannot understand where the mental health issues stem from," she adds. 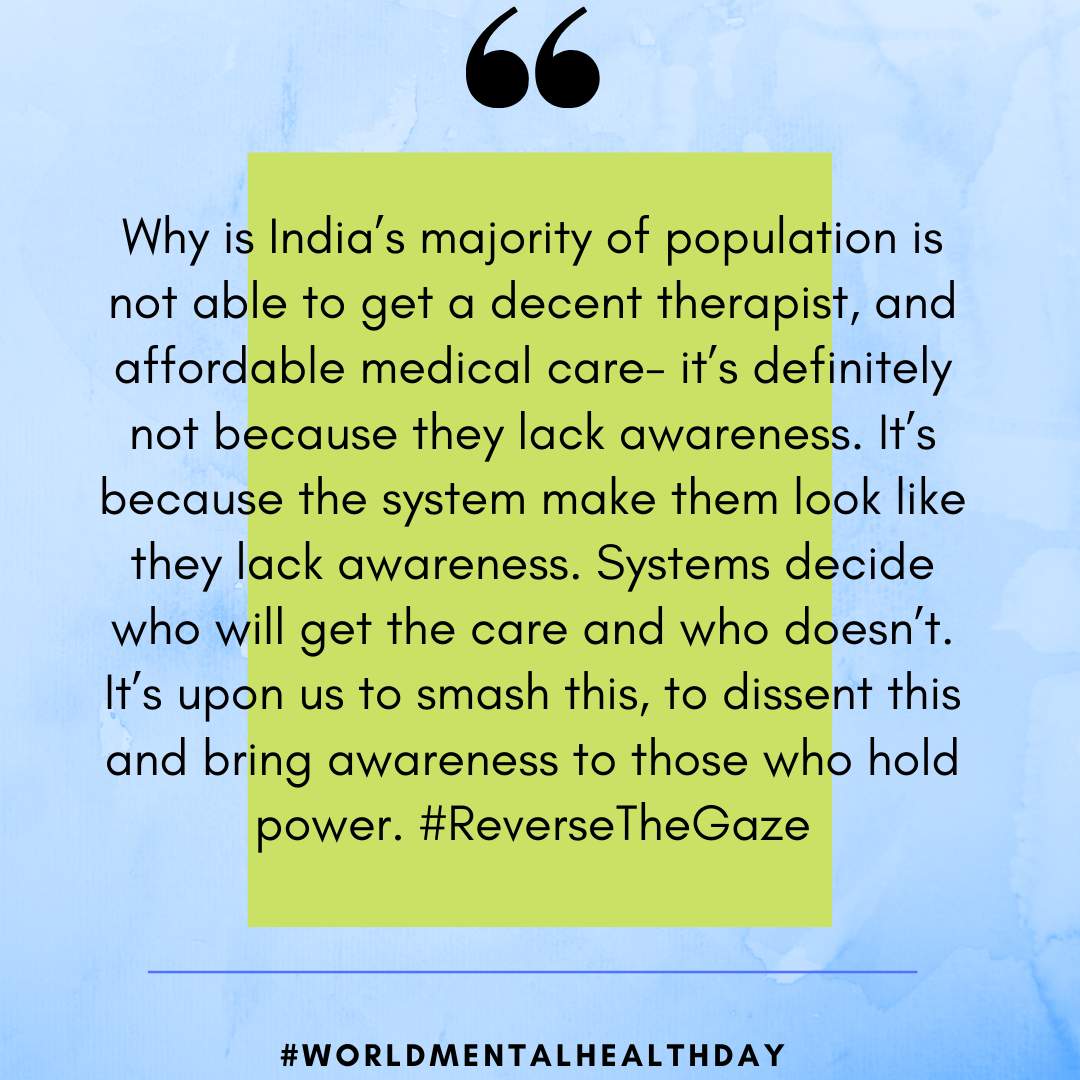 Why mental health should be accessible, affordable | Credit: Blue Dawn

In India, mental health is never really looked at from the caste angle, says the 24-year-old. "It's very hard to get a therapist who will locate my problem outside my body. Mental health discourse came from these Western ideas of what's normal and what's not, the literature is developed by 'white men from the West' with no context of the issues that are faced by the Indian population. It can prove to be more harmful to us than doing good. There are these catalytic ideas about fixing your body, fixing the loose screw in your head, getting the treatment done, taking the pills — no one speaks about the prejudices that people around you are transphobic, homophobic, casteist and that is why they might make you feel uncomfortable or unwanted. No one tells you that even when people have that mindset, it doesn't mean you are abnormal," elaborates Divya.

There's also the problem of accessibility to mental health therapy. A lot of people from Bahujan communities belong to economically-backward families and regular therapy sessions would cost `1,000–1,500 approximately per day, which means it might be equal to someone's monthly salary. This becomes highly impossible to afford then for lower-income families and students especially, says Divya. "We facilitate sponsorships for such individuals or families where the donor/sponsor can directly send money to the therapist or to us. But we also feel it's just one way of dealing with an immediate crisis, but in the long run, what we are trying to do is organise workshops and facilitate discussions to inculcate the idea of community healing," she adds. The pandemic and lockdown have quite severely affected Blue Dawn's groundwork, however, they have facilitated few workshops online. "A lot of people do not have access to smartphones, forget about internet connectivity. But we are continuing to stay in touch with the community in whatever way possible," she concludes.