And when you do, you'll notice how varied Indian temples truly are and how they are much more than just religious structures, they are truly cultural hotspots. This is how he breaks down his work

A temple doesn't just tell you the story of the deities residing within it. If you look carefully, it will tell you about the era it was built in, about its customs, traditions, people and so much more. Because temples, back in the day, were not just religious structures. Education was imparted by them, classical dance performances were held there, making it a powerful community centre. And it is this story that Assistant Professor Ramakrishna Kongalla is inquisitive about — the architecture, the iconography and the cultural significance of temples. Luckily for history buffs, the 33-year-old doesn't hoard all this information, he shares the information through his social media handles and enriches us too. And this is how his journey of documentation began.

As an Assistant Professor of Indian History at the Indian Institute of Tourism and Travel Management (IITTM), Gwalior, Ramakrishna has travelled to different parts of India to train tour guides. He even got the chance to put his photography skills to good use — he took an assortment of pictures but what he liked photographing best were temples, their architecture and iconography. "I had once gone to Nashik on one such trip and was surprised to learn that none of the localities had much information even about the temples nearby," he says, still sounding surprised. This prompted him to delve deeper into the subject of architecture, by reading Samarangana Sutradhara by Bhoja, Manasara Series by Prasanna Kumar Acharya and other such books. When his students discovered his wealth of knowledge, both facts and pictorial, they urged him to share it all on social media. "I wanted to write a book actually but they convinced me that this is the best way to reach a wider audience,” he says. And that's how the Twitter page @artist_rama and Instagram page @tourism_teacher began in 2018. "Twitter was a little difficult for me because of the limitation in the number of characters, but I do threads which make it easy for me to explain concepts," says the educator who has 10.4k followers on Twitter and 16k followers on Instagram. 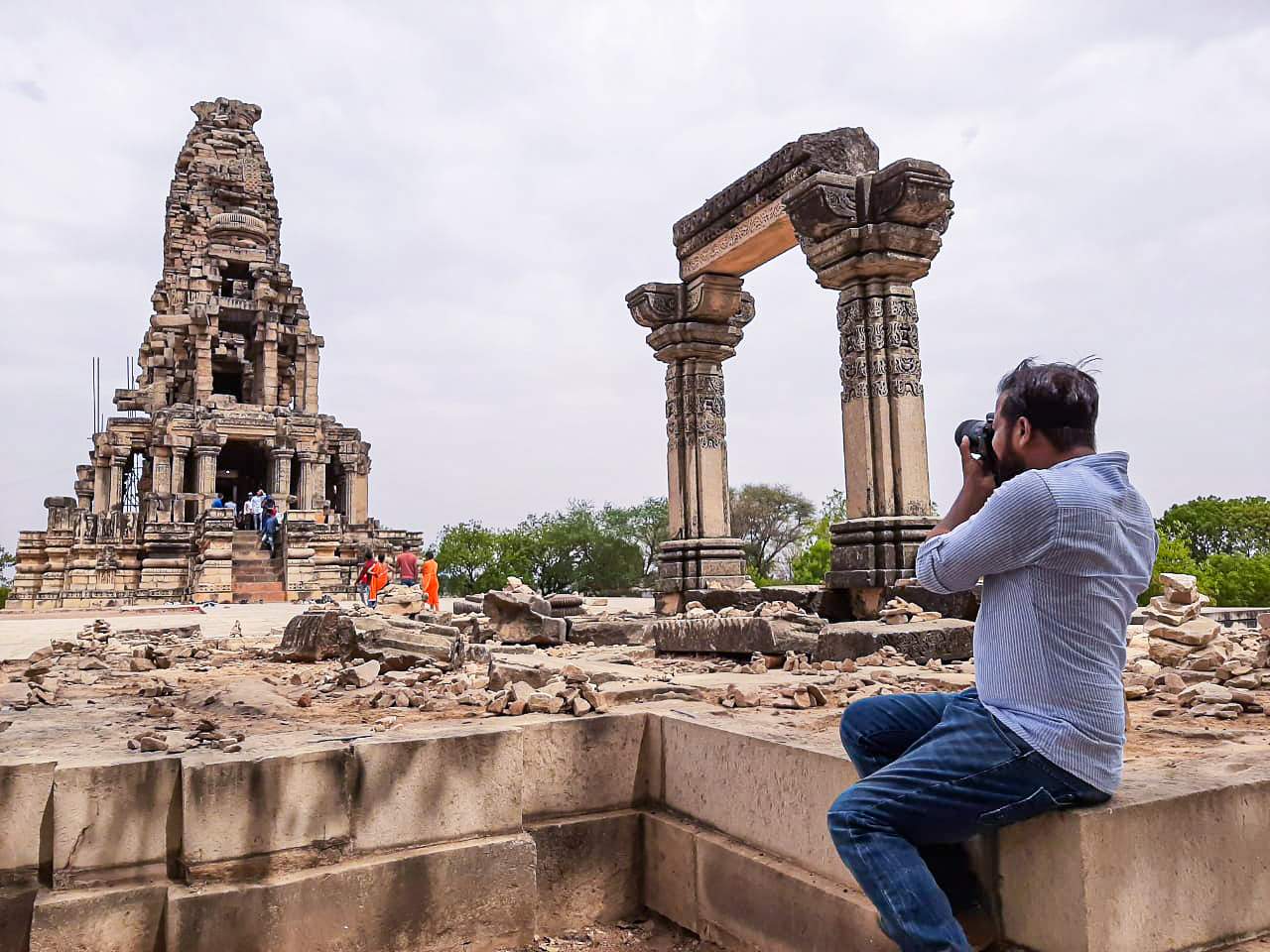 At the spot | Courtesy: Ramakrishna Kongalla

Hailing from Kalwakurthy, a small town in Telangana, this assistant professor's father was a folk dance teacher and practised Chirutala and Yakshagana. Ramakrishna grew up in an environment where culture was of utmost value. But he confesses that he came to realise the importance of it only when he was pursuing his MBA in Tourism from Pondicherry University. Teaching in IITTM since 2012, his love for temple architecture has just compounded into what it is today. What the assistant professor found on social media was a community of other pages dedicated to the same cause, architecture, like Lost Temples. And together, they helped each other grow.

Now, coming to his content itself. Being adept at Photoshop, he uses his own pictures and marks it with various arrows to make the explanation easier. For example, the Jambulingeshwara Temple in Pattadakal, Karnataka. The motif of Lord Shiva as Nataraja with his consort Parvathi is flanked by Vadhyadhara Dampati (knowledge bearing couples). The arrows pointing at the couple make it easier for the reader to grasp the information in one shot. But the best use of his Photoshop skills is when he recreates the temples as they were before they were destroyed by invaders. "What is left of the Konark Sun Temple in Odisha is just 20 per cent of it. I tried to recreate the rest by drawing the structures on the photograph," he says. And he has done this for vandalised idols like the Gajasurasamhara Murti too. No wonder politician Pawan Kalyan and a few MPs and MLAs are his followers. But while he engages actively with the famous personalities who follow him, he is equally engaging with the students who ping him with doubts, quiz him about more things and even ask him for book recommendations. "I have a group of 10-15 students I have found online who religiously read what I recommend and they get back to me with follow-up questions before they go back with another book recommendation," he says proudly. And for us novices, he breaks down all temple architecture into two types, Nagara temples in the North and the Dravida temples in the South. And they are usually dedicated to either Lord Vishu or Lord Shiva.

Speaking about a particular narrative that surrounds temples — that they are religious structures  — the assistant professor debunks this and adds, "They were much more than that. Take Kamakshi Temple in Kanchipuram. Outside the temple sit flower vendors and many other small shops. You spend money on them and then step inside the temple. Inside the temple are cleaners and other people employed by the temple. In a lot of places, till date, the economy of the surrounding area depends on the temple," he asserts. He also talks about some misconceptions that have crept in, like with regards to bali, which literally translates to 'sacrifice' and which people assume to be that of an animal. "But sacrifice can also be of rice or flowers. That's why there are bali peethams in South Indian temples where you sacrifice offerings for the lord. This has nothing to do with animal sacrifice," he implores. The assistant professor is certainly making the most of it when it comes to social media. And what is it that he wants to achieve through it? "What I wish to achieve through this is that the youth should see this and feel proud of their heritage. They should be able to reimagine the greatness of Indian heritage and culture. So much so that the government need not spend money or time on conservation anymore. The youth will be our new custodians," he says, brimming with hope.