Rajesh Rajamani talks about how he conceived the idea of initiating conversations on caste, gender through comics

Over the last couple of years, Rajesh Rajamani has become one of the most prominent anti-caste voices in the social media space. Scholars, activists, writers et al have produced vast volumes of literature on caste and while one cannot undermine the immense change that has brought to society and policy making, what makes Rajamani stand out is how easily he has made this information accessible to the general public. Through humour, sarcasm and witty commentary, Rajamani has managed to get people to not just get interested in social issues but also to invest in fighting them.

He is the man who always appears to be swimming against the tide - ten reviewers will tell you a movie was really good or really bad, but our man will have the opposite view and for good reason. So as a reader even if you felt yourself agreeing to all the ‘mainstream views’, Rajamani’s take will make you take a step back and question yourself. And even though he majorly writes on cinema, this applies to other hot topics as well. While his personal page itself is quite a hit with social media users, the two other pages he has created - Fictional Subtitles and Inedible India have both become huge hits with the public and they are both quirky in their own way. 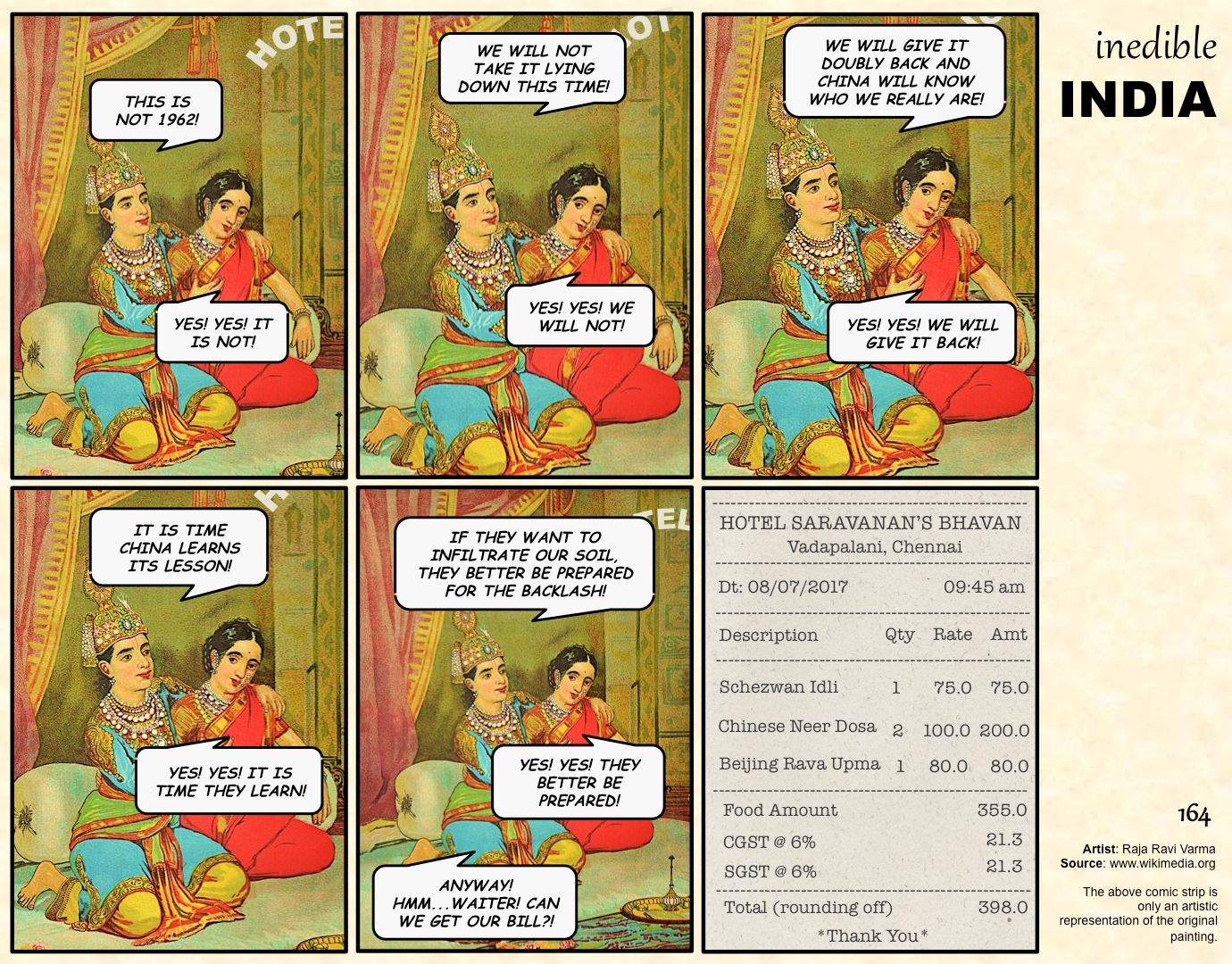 From politics to caste to gender | Courtesy: Rajesh Rajamani

Inedible India, that came first, features characters from Raja Ravi Varma’s paintings, Mughal paintings and also Kalighat paintings. So here you have these characters from centuries ago, talking in our current lingo about radical issues - so, you laugh and you take something away with you. But how did a man who graduated from IIM and then worked as a banker become a comic strip creator? “I was always interested in visual arts but I wasn’t a very good artist. Then I came across Wondermark and Royal Existentials where they had used existing paintings and sketches and written dialogue bubbles over it and I found this really interesting. So I figured I didn’t have to worry about not being able to sketch or draw, and decided to use these paintings as a base and just put my own dialogues on caste, gender and other social issues into it,” he explained. Interestingly, comics are believed to have come into existence during the World Wars as people tried to give the nation hope as their men were far away and fighting in distant lands.

“Raja Ravi Varma’s paintings are very traditional and depict stories from Hindu mythology, so I thought what is better than getting conservative Hindu characters speaking the most radical things? And Kalighat work is already satire, so I felt using these paintings would amplify the satire in the comics. One would portray contradicting themes while the other would amplify the themes of the original painter,” Rajamani tells us. Rajamani felt that most of the satire that was already being made was too ‘safe’, “They were critical of the ruling political party or politicians but no one was critiquing society. So it wasn’t just contemporary issues that I made comics about, there was a lot to say about society already.” The 35-year-old first started putting these comics on his page and when he began to get flooded with friend requests, he decided to set up a separate page where people he didn’t know could also follow his work. The two comic strips that often go viral every now and then is one about the Delhi pollution and another about Hindi Imposition, since they are often discussed topics, “The Delhi Pollution comic has one person saying a dialogue but half of it is hidden because of the smoke, the rest of the comic is also engulfed in smoke. The Hindi imposition one has a bunch of different animals, all saying quack because the ducks had imposed the one language policy.” 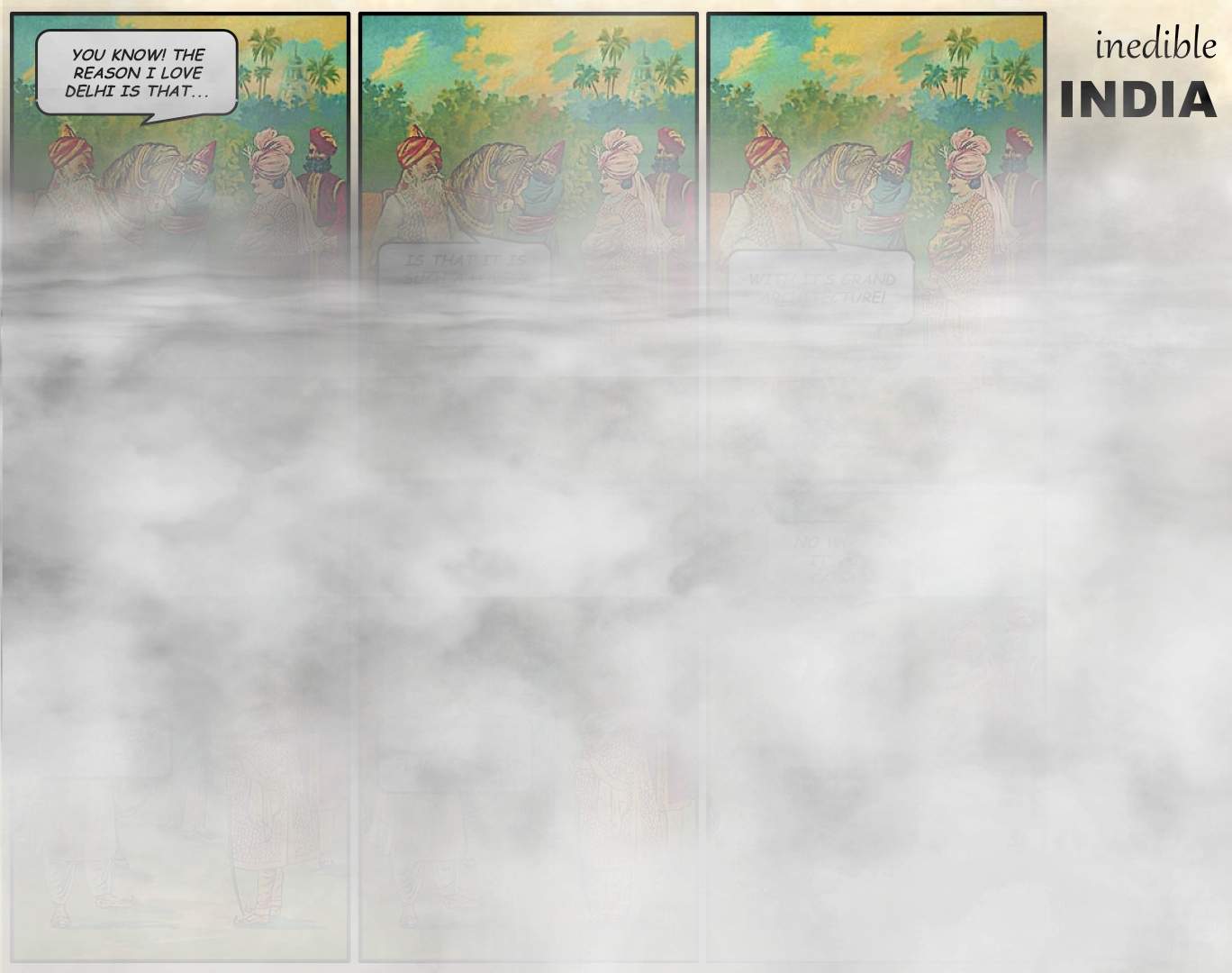 But he realised that when the comics were not very political, his readers didn’t seem to be as interested. Which is why he decided to set up ‘Fictional Subtitles’ which again was a stand-out idea, “I also wanted to write about things like love and romance and other regular day to day things about human nature too. That’s when I decided I would use stills from foreign films that people might not have seen here and superimpose dialogues on them.”

Now, like any other social media ‘celeb’ Rajamani does get a lot of harsh criticism but he says it is a good sign when a comic leads to a lot of debate. “It’s nice to see polarising views and conversations being created around issues. Actually when people just appreciate and remain silent, I actually feel very let down and I wonder if I wrote something too safe. But usually I do get a lot of interaction and engagements on the page, which is good,” he said. The Chennaiite has now moved into filmmaking as well, of which he feels comic making is also a subset and has made a film called the Discreet Charm of the Savarnas. “I wanted to throw light on the upper castes and talk about how they interact, respond to caste and exist in the structure and their relationship with this structure. I think when we think of caste, we think caste equals Dalit. And the conversation is limited to three things - manual scavenging, honour killing and reservation. When someone is oppressed, it also means someone is privileged but there are very few narratives around them, that’s what I wanted to do with the comic strips. So the film is an extension of that.” 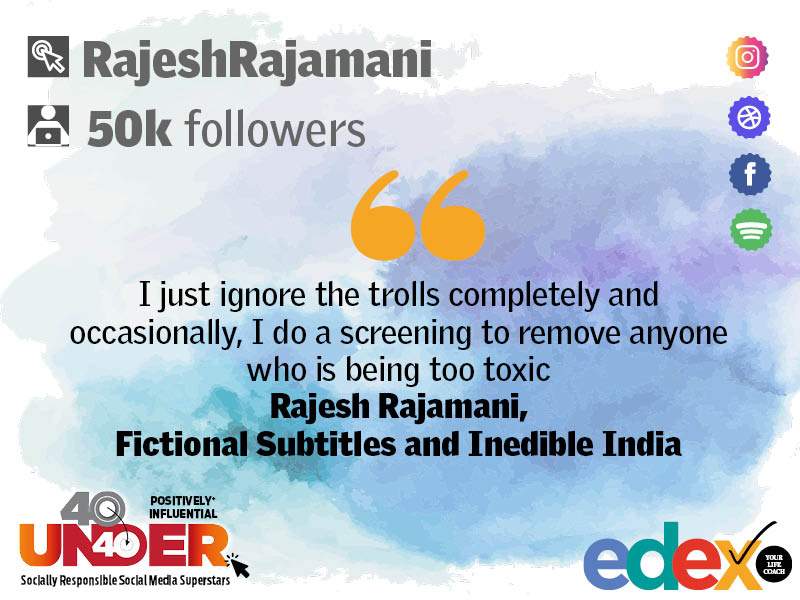 Rajamani feels he has been able to garner a good following because people want to hear diverse voices and perspectives. But he also faces his share of trolling but says it's easier for him to ignore unknown trolls but when he knows the people who say nasty things to him, it does affect him a bit.

But he is happy that conversations around caste are happening in social media, “Conversations on things like reservation have never happened in mainstream schools despite Tamil Nadu having a progressive Dravidian movement, still people are not educated on reservation. Which is how the SC, ST and OBCs are made to feel guilty because they avail reservation. Social media has brought all these difficult conversations to the forefront to debate, discuss and help us understand better. That’s the great thing about social media, all the voices that have been suppressed have a platform now.”