Pavan Srinath is a bilingual podcaster with over ten years of experience communicating to India's youth about public policy, urban governance, current affairs and everything in between

Sitting in my bedroom, plonked comfortably on a bean bag, I pay close attention to the layman's definition of public policy. “In the simplest terms, public policy is a set of laws or rules by which our governments operate. It is something that shapes where you live, how you live, how you get to work, what kind of work you are allowed to do and so on. Previously, we would refer to parts of the public policy as governance, as public administration, as laws and judgements. Though the concept isn't new, the term itself is relatively new in India." Today, I am a student learning about public policy. And my teacher? Pavan Srinath.

A bilingual podcaster, Pavan is the host of two podcasts — The Pragati Podcast (English) and the Thale-Harate Kannada Podcast (Kannada). But what makes him an expert on public policy? “I have been working in public policy for the last ten years," he begins, "A big part of my role has been in communicating the complex workings of our governments. But often, the belief is that these messages should only be conveyed to some IAS officers sitting in some government office and then, we’ll see some changes in how the government works. I strongly felt that we needed to articulate these complex ideas to everyone because we’re a democracy and real change happens only when enough people believe that we need reforms or a new system.” Steering clear of making YouTube explainer videos and instead embracing India's timeless love for a good tête-à-tête, the Bengalurean tells us why he chose the podcast route, "If you remove the technology side of podcasts, we’ve always liked conversations and stories, we want to hear someone speak." He continues, "Though podcasting is still in the stage where you first need to find the podcast, subscribe and then gain access to the episodes, once people discover you, they can listen to as many episodes as they want.” And there are 149 of them in English and 78 in Kannada. With more awareness about podcasts today, boosted by content that's relevant yet also has timeless importance, Pavan informs us that every month sees a 10-15% hike in overall listenership.

His listenership for the Thale-Harate Kannada Podcast is primarily working professionals living in Bengaluru and other cities in Karnataka and a small but significant percentage of Kannada-speakers around the world. The Pragati Podcast, on the other hand, is for any citizen interested in understanding how the country works. On both podcasts, Pavan discusses topics that he believes will add value and expand minds rather than close them, "It's because on social media, we invariably close our minds — we listen and talk to people whom we agree with and shout at people whom we don’t agree with. The idea is to take a conscious step back and realise that the world is more complex than that, so should our understanding be," he explains. Talking about the need for youngsters to get involved in politics and policymaking, the 33-year-old says, "If you just survey our politicians, you’ll think that India is an old country but we’re an incredibly young country. Every year, millions of youngsters become eligible to vote — that’s the first and most fundamental thing we can do as a democracy, vote. But we have to vote intelligently and in an informed manner and that’s on us." He adds, "Also, we see politics, public policy and so on being professionalised in many ways today. Now, almost every MP has a research assistant to keep them informed. So, in that sense, there’s been an increase in job opportunities. Youngsters, at such positions, can affect considerable change." 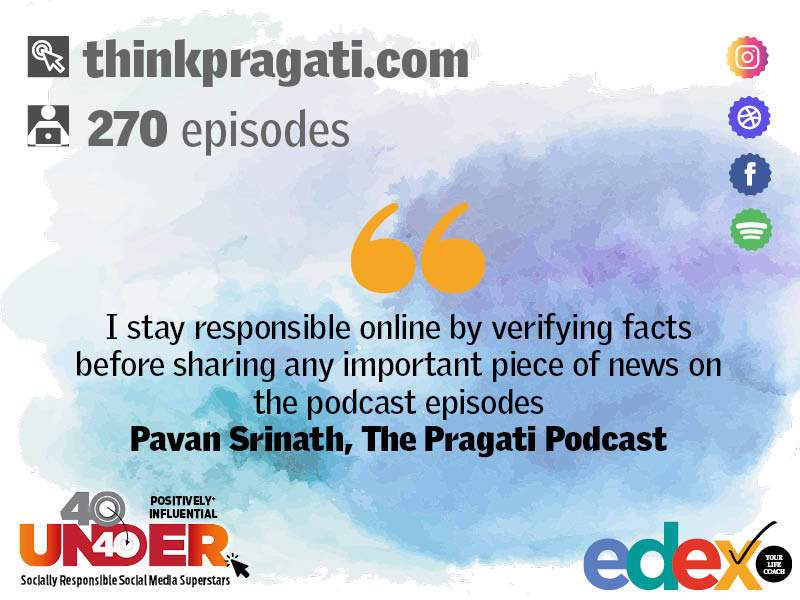 We've been an independent nation for over 73 years now but we've often heard experts say that our Constitution is still heavy in policies from the British rule. Don't we need some new reforms, I wonder out loud. "Yes, and one reform I think we need is for our city governments to not just be creatures of the 74th Amendment which basically says that states have the responsibility and should do what they can to devolve power to cities. I think we need to rethink that. We need powerful mayors, we need corporators with more power and accountability, we need a city council to have more real legislative power. Thinking locally is an important change in mindset that we need to have as citizens as well," says Pavan who studied Biotechnology at IIT Madras.

Yes! He's a Science geek that grew into a political nerd. He realised one day that he wanted to focus more on research and communication and got interested in complex systems like economy and governance. "In the past 10 years, I've had the opportunity to look at both public policy and Life Sciences-related aspects of it like COVID-19 and how India handles its healthcare system. In India, we think that healthcare and public health are the same thing. But they aren't. Public health is about epidemiology, tracking diseases, doing interventions like cleaner water and air and better hygiene to have a healthier population," says Pavan, adding that though India had a bit of a slow start with the COVID-19 situation, with our never-too-late attitude we have done some commendable work.

And with that, class dismissed!