It’s 6 am but the heat wave is palpable at Jahania beach in Astaranga. Unfazed, 22-year-old Soumya Ranjan Biswal sets out towards the beach along with a group of children from his village. This is no leisurely walk, though. With a large gunny sack on his back, he picks up plastic packets, pouches and empty bottles of liquor from the white sands of the beach and puts them in it. So do the children.
The baby Olive Ridleys will be hatching soon and Soumya wants to ensure that there are no obstructions in their path through the beach. This has been his daily routine ever since the nesting of Olive Ridleys began across the Odisha coast. For the last one month, Soumya and his friends have been patrolling the beach every night to protect the turtle eggs. His job is an unpaid one but he has been doing this since he was just 10.

From making sure eggs of the endangered species are protected from predators like dogs, jackals and other animals, taking out a cycle rallies to spread awareness among coastal inhabitants for safety of the sea turtles to cleaning the beaches for release of hatchlings, Soumya, fondly called Olly Boy by the greens, has been doing it all. He has also set up an organisation, Odisha Paryavaran Sanrakshan Abhiyan that looks into protecting wildlife and Olive Ridley turtles. 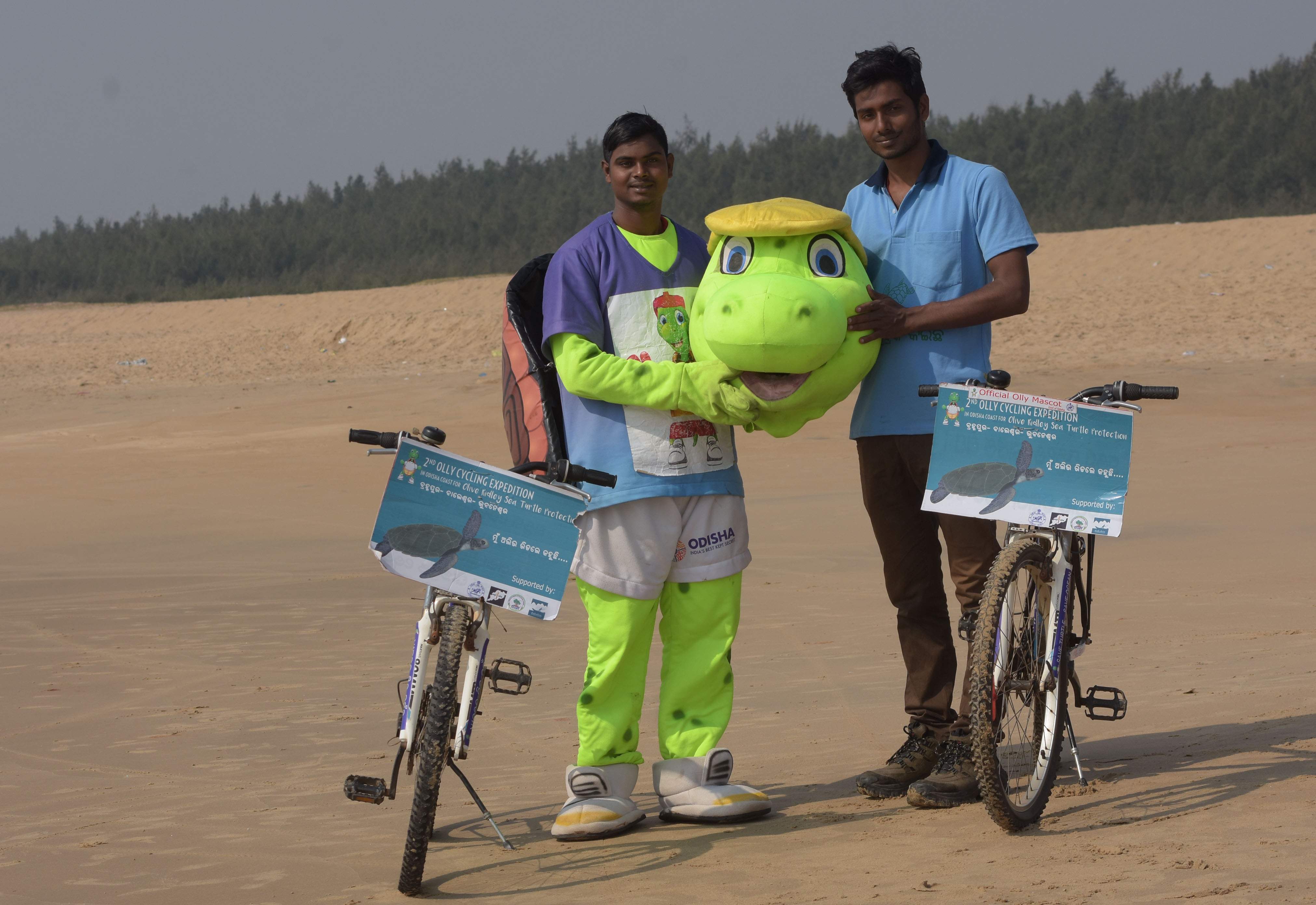 They are shore: Soumya and Dilip work together | (Pic: Biswanath Swain)

Joining forces
“Apart from Gahirmatha, Rushikulya, the endangered Ridleys also visit the mouth of Devi river near Astaranga of Puri district for arribada, a Spanish term for mass nesting. In fact, the sea turtles return to the same spot after navigating thousands of miles of ocean to lay eggs in this part of Eastern India, a ritual unique to Odisha,” says Soumya, adding that the turtles arrive in batches and choose their spots on the beach to dig up pits with their flippers and lay 70 to 190 spongy eggs each before swimming back into the dark waters. The nests, however, are vulnerable to predators and poachers. Hence, eggs from the nests at risk are collected by Soumya and forest officials and relocated to hatcheries dug up at a safe distance. After a period of 45 to 60 days, the hatchlings emerge and are released into the sea at Astaranga beach. “If the turtles keep coming back to the same spot every year to nest, then they are doing well. But if they don’t, something is wrong,” says the turtle custodian, who took out a 1,200 km cycle expedition for the cause of Olive Ridleys earlier this year.

But Biswal, a student of Nimapda Autonomous College in Puri district, was not alone in this arduous journey. Cycling along with him was his college junior Dilip Kumar Biswal, who is equally passionate about Olive Ridleys.  Dressed as Olive Ridleys, they began their month-long expedition in January paddling through coastal pockets of Rushikulya, Puri, Chilika, Jagatsinghpur, Kendrapara, Bhadrak and Balasore to create awareness about protection of the turtles. On their way, the young environmentalists made stopovers at all Government-run schools to meet children besides, fishermen and their families and explained to them the importance of Olive Ridleys.

Record-breaking ride
“Children are the future and hence, they need to understand this living marine heritage of Odisha,” says 20-year-old Dilip, who hails from Sakhiogopal. He adds that the visit of the turtles is dwindling along the Devi river for the last few years because of fishing trawlers and pollution. “This is why we decided to embark on the cycle expedition again. During interaction with the people, school and college students, we advocated the protection of Olive Ridley turtles. These turtles are our guests and we should protect them,” he says. While the State Forest Department sponsored their expedition to an extent, the two also sold 2,000 toy turtles made of coconut coir fibre by the women of Astaranga to fund their journey.

In March last year, the two cycled for 800 km to reach Gahiramatha, the major nesting site of the turtles in Kendrapada district, while covering the coastal areas of Puri, Chilika, Gopalpur, Rushikulya river mouth, Satakosia, Bhubaneswar, Cuttack, Siali and Paradip. For this journey, both Soumya and Dilip entered the Limca Book of Records for carrying out the ‘Longest Cycle Ride for Turtles’. 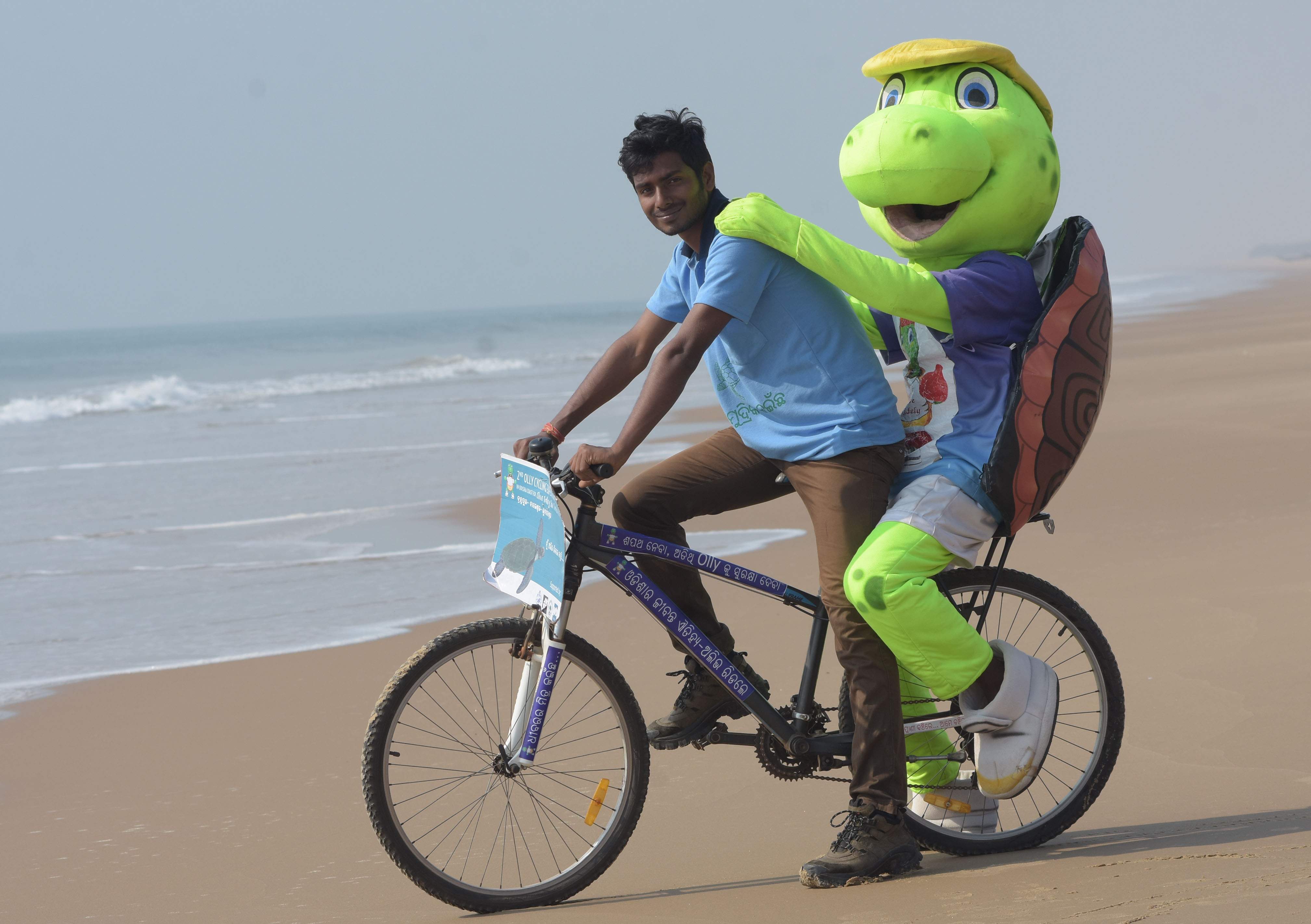 The A team: Soumya and Dilip cycle to spread awareness | (Pic: Biswanath Swain)

Symbolic gesture
While Olive Ridleys are close to Soumya and Dilip, the duo has also been working for the cause of sparrows, reviving dry water bodies in forests and keeping beaches plastic free. “We always had an interest for ecology and wildlife. and we have grown up in seaside villages seeing these endangered turtles. When Soumya, my senior in college, was carrying out wildlife protection activities in college through his Odisha Paryavaran Sanrakshan Abhiyan, I decided to join his organisation,” recalls Dilip.  When the Odisha government agreed to have the Olive Ridley sea turtle as the mascot for the 2018 Hockey World Cup, that was when the young environmentalists decided to hold their historic cycle expedition.

With the sweltering heat drying out ponds and other natural water sources in forests, both Soumya and Dilip are now busy reviving them to quench the thirst of animals. Soumya, who also works as a guide for tourists visiting Devi islands and Astaranga beach, is also collaborating with voluntary organisations to procure bird houses for sparrows.

What we can do to help the duo: