Saravanan, a fisherman, does something that is a first in Chennai — he designs maps of coastal areas and fishing communities

In journalism, an article's lead determines whether or not a reader will read the rest of the story. But there's no other way to start this story except by saying — Saravanan Kasinathan is the coolest Chennaiite. He emanates so much uber coolness and intelligence, he deserves one of those shade wearing meme versions of himself. Saravanan, a fisherman, does something that is a first in Chennai — he designs maps of coastal areas and fishing communities. With these maps, fisherfolk now has a unique superpower. They have the power to stand up to any corporate and in any court of law and say — This land is my land.

Before we get into the awesome work that he does right now, Saravanan gives us a bit of an insight into what his childhood was like. He was born in the fishing village of Urur Olcott Kuppam and while in school, he was frequently referred to as 'Kuppathu paiyan', meaning 'fisher-boy and also a 'rowdy'. At that point, he says he came in touch with the RSS, "I would go for their meetings and they would tell us to hate all Christians and abuse them. They taught us to be violent," he said. He even told us about how he was violent with women too and had no idea how to show respect to them. Saravanan said he became a bit of a wild child and then there was a turning point — a new teacher in school. This new teacher, Poornima, changed Saravanan. "They found out that a few of us were involved with the RSS and so they made us remove this orange thread we had all been wearing. I tried to skip the day that they did that, but they took me to task the next day. And then counseled me on why I should not hate anyone," he recalled. But then there was more in store, Poornima introduced Saravanan to nature, even though he had grown up in its lap. It started with the Olive Ridley Turtles. 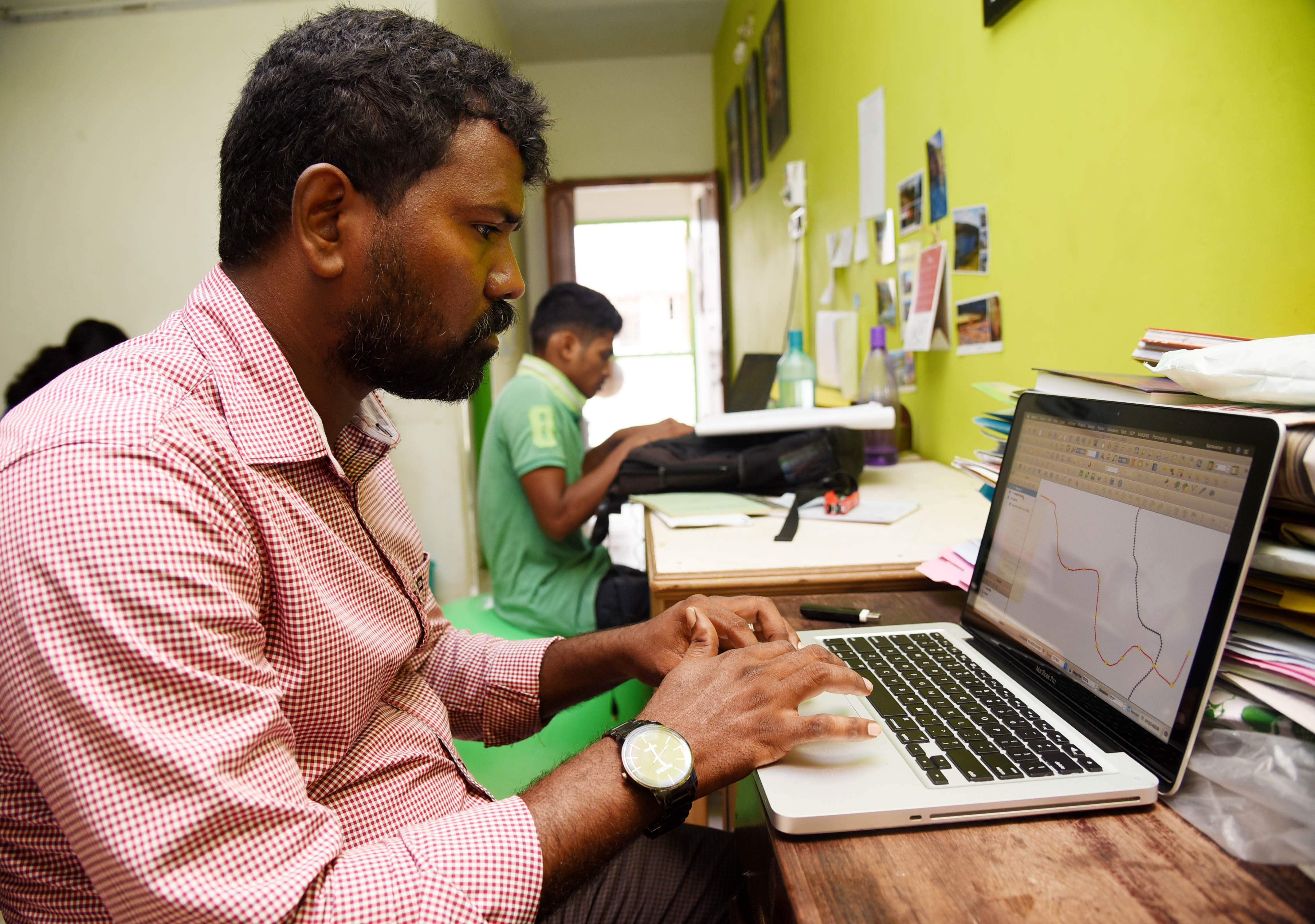 Mapping On: Saravanan in the process of creating a map while at his office in Besant Nagar, Chennai

"Till then I didn't know that plants had life or that we must protect the sea creatures. Once Poornima told us about Olive Ridley turtles and slowly I began to get an understanding of the environment," he said. However, after he failed a paper in his 10th, Saravanan found a job at a tailor shop and went on with his life, until Poornima walked into the shop to buy something. "She yelled at the owner for giving an underage boy a job. The owner thrust some money in my hand and chased me away. I passed my 10th paper and went on to stand first in the 12th board exams," Saravanan said, proudly.

Soon Saravanan had no time to drink or fool around with his friends, he threw himself into the Olive Turtle conservation work. "I started the Turtle walk at Marina beach and even held training sessions on how to protect the turtle eggs," he said. Then he met Nityanand Jayaraman and began to work on issues that affected his own fisherfolk communities. He began working on problems like illegal sand mining, "We filed a case against a corporate but it was being tried in Delhi, so it didn't see much progress." Then the government established the National Green Tribunal in Chennai, "The case was one of the first to be heard. That's when I realised that I actually knew more than the advocates fighting the case," he said with a smirk. That was the first victory.

"I never speak for the community. I only gather evidence for them to show in a court of law or show to the corporates who come demanding land or to the random bribed politician. I don't fight against anyone, I simply give people the information they require to fight their case." — Saravanan

The next big fight was the Marina to ECR Expressway. "When we questioned the authorities, they simply said that they are building on wasteland. The land that my forefathers had lived and worked on was suddenly being termed 'wasted land'," Saravanan told us. That is when Saravanan realised that it was important for the fisherfolk to have an understanding of what was theirs and they deserved to hold proof in their own hands and not rely on anybody else to fight their fight.

So when he saw a friend designing maps, he began to sit by him and relentlessly ask questions. So much so, that his friend even held a training session for him. "Soon I began to design maps of our fishing communities. We realised that the mapping had to include, the living spaces, the fishing grounds, the area to keep boats, the area marked our for fish rearing and any other area that the fishing community might be using," he said. Saravanan also designs the maps keeping in mind all the coastal regulations. So, for example, if a person proposes to build a factory or any other kind of structure, the map will clearly demarcate the area to show the plan as an encroachment, "We take the exact measurements and place the building on the map depending on its coordinates. So the fisherfolk know that it is an encroachment, in many cases the corporates themselves only know after we show them the map that they are encroaching on fisherfolk land or violating environmental norms," he explained. But what was also essential was for people to be able to read those maps, so Saravanan requested the government to start creating maps in Tamil. They said no, so he began to make them himself, 'It's the first time ever that maps began to be made in Tamil," he said, smiling. Passing down empowerment: Saravanan says he is keen on passing on the skills he's developed in map making and is always eager to teach every chance he gets

Saravanan files the RTIs himself, gets required information whenever any fishing community members approach him with an issue. Even if no one approaches him but he knows there is illegal construction, he lets the people in the area know. So I ask him, that now after all these years, he might be such a scare for corporates and environment violators. He says he's not, because nobody really knows him, "I never speak for the community. I only gather evidence for them to show in a court of law or show to the corporates who come demanding land or to the random bribed politician. I don't fight against anyone, I simply give people the information they require to fight their case," the 36-year-old said.

"For some people, it's just a tiny line they're crossing. But for the fisherfolk, it is the backbone of their livelihood. My father always said, Kadalum Kadalalaiyum kadalaalukke!', we are just ensuring that it stays true," he added. He's aced the map making software so much, he says even the person who first taught it to him, asks him doubts now. So what does he have planned for the future, I ask him, "Well, we are the first state in the whole country, to have such maps designed for the fishing communities, it is on an international level and we've received a lot of praise for our work. I even give training in how to use the map making software but I want people who come after me to also learn it as well as I have."

Erratic hours, endless travels, taking on massive corporates, attending legal hearings. all this might give no time for a personal life. Saravanan agrees but he says his wife is 'God's Gift', if she didn't support him, he would not be able to do the things he's doing. Is it all worth it though, does he get the appreciation he deserves, "I love compliments, I love good feedback. It's not that I'm greedy for them, but I like to be told that I've done a good job. Because whatever I do, I put my heart and soul into it and how many people even actually get their hands dirty? But at the end of the day, I am a fisherman and I will do everything to protect my people," he said. The absolute coolest, right?