The 3000 square feet farm produces an equivalent yield from 1.75 acres of conventional farming. Prajanma Das finds out why we need to think beyond soil when we think of a farm

Ever thought grocery shopping would be exciting? Vihari Kanukollu certainly did. If you visit his UrbanKisaan farm and order veggies, he will harvest it right in front of you. That way, it's as fresh as it gets and you get to visit a farm pretty often. Win-win, right?

Vihari founded UrbanKisaan with Dr Sairam Palicherla and Srinivas Chaganti in 2017, to grow pesticide-free produce in 'soil-less' vertical farms in cities using 95 per cent less water — managing everything from the seeds to its proprietary, farm-controlling software system. They also empower people to grow their own safe, fresh and high-quality food. "Taking a tech-centric approach we have formulated multiple nutrients for both Indian and exotic vegetables and fruits. Our farming technique allows plants to grow without soil, using only water-mixed nutrients enabling farms to move into these abandoned spaces in cities and create new jobs and industry," adds Vihari. 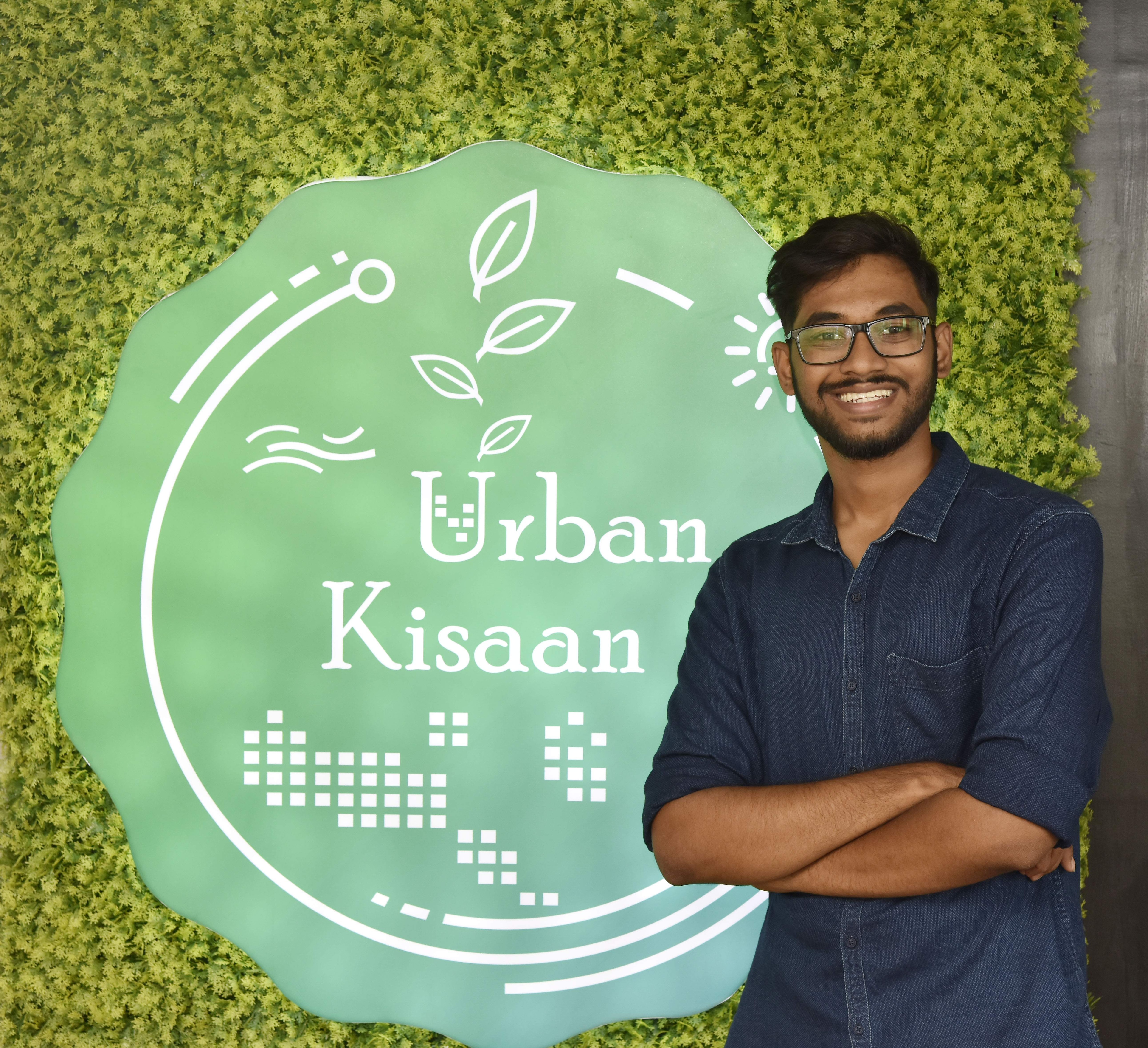 Farm this way: His farm is concentrating on leafy vegetables as of now and he wants to replicate this project in other major cities (Pic: Vinay M/Express)

A commerce graduate from Asan Memorial College of Arts and Science, Vihari always wanted to do something more, "Though I was preparing for a career in finance, I was always concerned about issues that impact society. In 2017, I came across a report that underlined the increasing gap between demand and supply of food, decreasing natural resources, old agricultural practices and complete lack of transparency in our value chain," says Vihari.

His farm is concentrating on leafy vegetables as of now and he wants to replicate this project in other major cities. "The farm is laid out across 3000 sqft but the production is equivalent to the produce from 1.75 acres of conventional farming. The produce here has an almost zero carbon footprint as it does not have to be transported from somewhere else. It is inside the city and we will cater to people here," says Vihari. 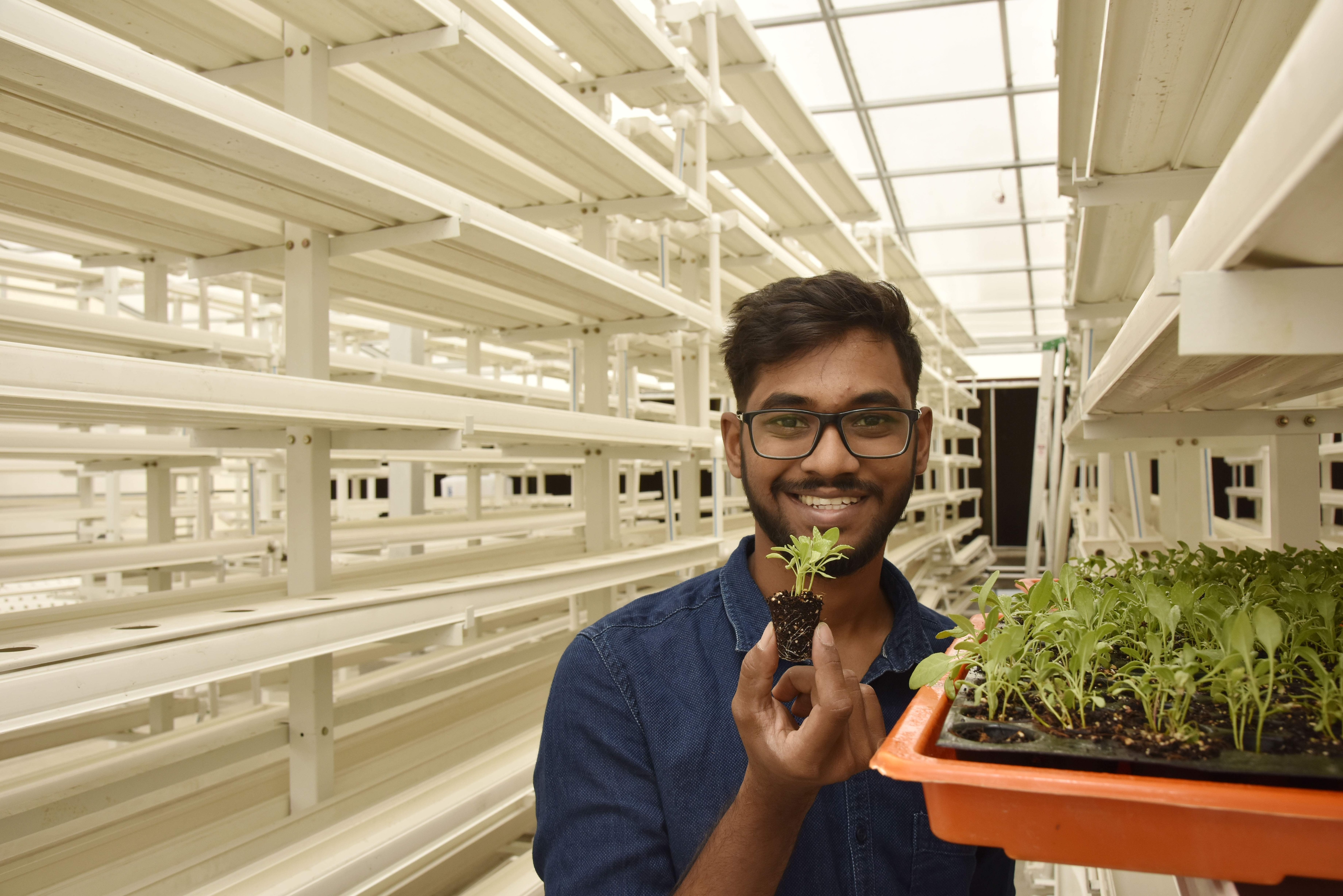 Growing Green: Vihari's new endeavour has got him excited and he wants to expand to other cities as well (Pic: Vinay M/Express)

Sustainability, is the long-term goal, "We would like to sensitise people on current food production which sacrifices quality for quantity at the expense of our health and environment. Living in an urban setting, we realised that our food travels long distances, thus losing its freshness and nutrition. By figuring out ways to grow food in a more efficient, transparent and sustainable way, we’re addressing some of the biggest problems that stand in the way of feeding the growing population. We've built farms and have sold over 165 home kits across India, giving everyone the opportunity to do their part to save the environment," he explains.

By 2050, the world would need to feed more than 9 billion people requiring us to produce 70 per cent more food than what we consume today. On the other hand, 40 per cent of the water demand will not be met by 2030 and 20 per cent of the arable land has degraded already.

Vihari says that they are reimagining what agriculture looks like in a world where water is scarce and people live in cities wake up to the dangers of pesticides, "We want to ensure that everyone has access to safe food by building more farms near where people live," he explains. Vihari's farm also encourages farmers who have migrated to the city and have taken up odd jobs to get back to farming. "Whatever be the form of farming we will always need trained farmers to help us with the process and they get to do something that they know and love and also earn a bit," he adds. "Lack of traceability of food and the carbon footprint attached to it is also a major threat to the environment. Thirty per cent of the food produced is being wasted by retailers and hotels, which has created a $1.5 trillion problem," says Vihari.