Co-founder of Prani Pet Sanctuary, Sanjeev Pednekar tells us what shaped him as an animal rescuer and encouraged him to start his own organisation

When Sanjeev Pednekar was around 10 years old, he would catch tadpoles from a dirty water tank and sell them to an aquarium shop nearby. He would earn Rupee 1 or 2 per tadpole. Back then, he did not realise that his interest was more towards saving animals and birds. Over a period of years, the tadpole-catching-boy went on to rescue various animals across Karnataka and he is now an animal rights preserver, herpetologist and conservationist.

Sanjeev realised his interest in wildlife and their conservation when he was in class VII. He studied in BNM Public School in Bengaluru and every week, they had a class called Newspaper and Education. Going back to his school days, Sanjeev narrates, "During these classes, we had one resource person who would speak on various topics. All the classes were boring until one day, MK Srinath, an education officer from the World Wildlife Fund and a renowned wildlife conservationist came to our class with a baby crocodile and two picnic baskets with King Cobras in them. My friends and I were shocked. He explained about the reptiles, their prey and living habitats. Until then, we hadn’t seen these creatures up close and had only read about them in books. That one class was enough to fascinate me and I decided to study more about reptiles, mammals and birds and not just within four walls of a classroom, but on the field." 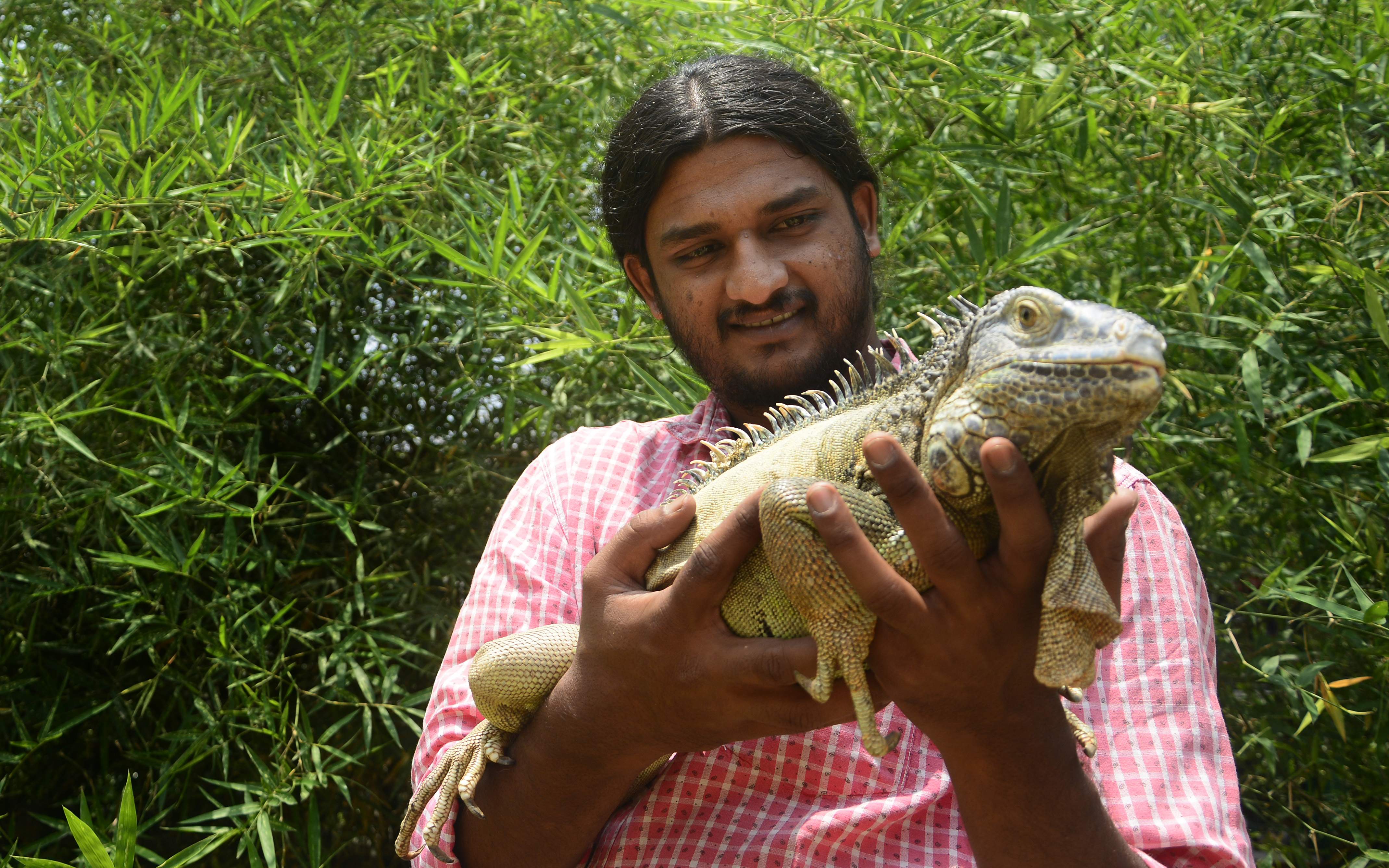 Meaningful sevice: It's been ten years since he has been in the service of animals and birds (Pics: Sriram B N)

After class VII, though Sanjeev was physically present in the school, he was mentally absent while listening to lectures and classes. Later, he took up courses in three different colleges, but due to his lack of interest in studying within four walls, Sanjeev's attendance was either three per cent or nine per cent. When asked about what he would do on other days, he says, "I volunteered for several organisations like Compassion Unlimited Plus Action, Karuna Animal Welfare Association of Karnataka, Bruhat Bengaluru Mahanagara Palike's Forest Cell (BBMP) and so on to rescue animals, birds and learn skills to handle them." Sanjeev has always been self-taught and he never received formal training for the work he has been doing. He says, "When it comes to volunteering for rescuing animals in the wild, all we need is skills and I believe that nature is the best teacher to teach them to us."

For animals
With an inclination to learn about reptiles, Sanjeev left Bengaluru to volunteer with Agumbe Rainforest Research Station (ARRS) when he was 17-years-old. "I was a part of several projects that were designed to conserve cobras and their diversity in the Western Ghats. In fact, I was the first one to track the path of King Cobras every day. After a few months, they realised that I was not 18 years old and I had to quit. I waited until I turned 18 and went back to study there. After spending more than a year, I left ARRS and worked for other organisations which worked for wildlife."

A must visit for kids: Many school children visit  Prani to learn about animals and birds

Sanjeev moved to work with BBMP’s Forest Cell and the initial months were a bit difficult. Every day, they would get more than 30 calls requesting them to rescue wild animals like leopard, elephants, snakes, birds and even dogs and cats in Bengaluru and its outskirts. He says, "At BBMP Forest Cell, it is not just about rescuing animals or birds, it is also about catching poachers and smugglers who smuggle ivory or the skin of animals and rescuing Monitor lizards which would get slaughtered regularly. We would follow these smugglers and catch hold of them. There were many incidents which made newspaper headlines. We found a snake inside the house of former Prime Minister HD Deve Gowda, a leopard on the campus of Bangalore University and many more. I still remember the incident when a leopard had climbed a coconut tree in a farm and around 2,000 people had gathered around it. It was a big task to bring it down from the tree and capture it in a cage. Usually, people get scared and anxious when they find such animals at their home or on their farm. This happens due to the lack of education among people about wildlife."

A place of their own
Having enough experience in taking care of animals and birds, Sanjeev decided to start his own pet sanctuary for spreading awareness among people about coexistence with animals and their behaviour. Two years ago, he started Prani Pet Sanctuary with the help of funds that he received from his uncle. Located on the Kanakpura Road in Somanahalli village, Prani The Pet Sanctuary is spread across four and a half acres of land. "Many animals in urban areas and animal lovers required some space to stay. That's why we started Prani. We have over 350 animals with us and all of them were rescued by us. We have hamsters, horses, turtle, emus, hedgehogs, foal, cows, sheep, goats, rabbits, gerbils, Chinese Dwarf Hamsters, turkey, guinea fowl, silver pheasant, Golden-Tailed Pheasant, quail, ducks, geese, rooster and hens, African Clawed Frogs and Red Eared Sliders."

Prepping up next gen: Sanjeev takes time to train youngsters in bird watching

Sanjeev says that it's very difficult to find skilled people to work in his organisation. "Whoever considers taking care of animals as a job and joins Prani has not survived for more than 20 days. People should be able to change themselves and accept it as a lifestyle. With that attitude, they can cope with and work for the betterment of animals and birds. Since Prani is open for people and kids to visit, one has to be ready to educate people and be patient and calm with kids. They also have to look after safety aspects. Apart from this, veterinarians in India don't have much knowledge about wild animals or birds other than dogs, cats and cows. If you show them an emu, they will say it's a peacock. This is another huge issue that we face. Fortunately, my team is educated and informed about animals." Another skill that Sanjeev stresses on is to identify the animals' condition by looking into their eyes, observing their behaviour or their excreta. "The person has to look into all these aspects and tell us if the animal needs something, is sick or healthy and happy. A watchful eye is a requirement."

Educating people through Prani
According to Sanjeev's research, only four to five per cent of India is literate when it comes to the environment, animals and birds. Therefore, Sanjeev and his team are educating people, especially kids, about animals. "We focus on building tolerance, co-existence and compassion among people for animals. People who visit us can spend two hours in our sanctuary and we take them around to tell stories of every animal. The other activity which we do is working with schools where we cover students' curriculum without using conventional methods. Instead, we bring them to our sanctuary and explain every scientific aspect of animals. Every class V or VI student has a lesson on the lifecycle of insects wherein, we take them to our butterfly garden and explain the life cycle of a butterfly. It's easy for them to understand practically rather than by rote learning from books," he explains. 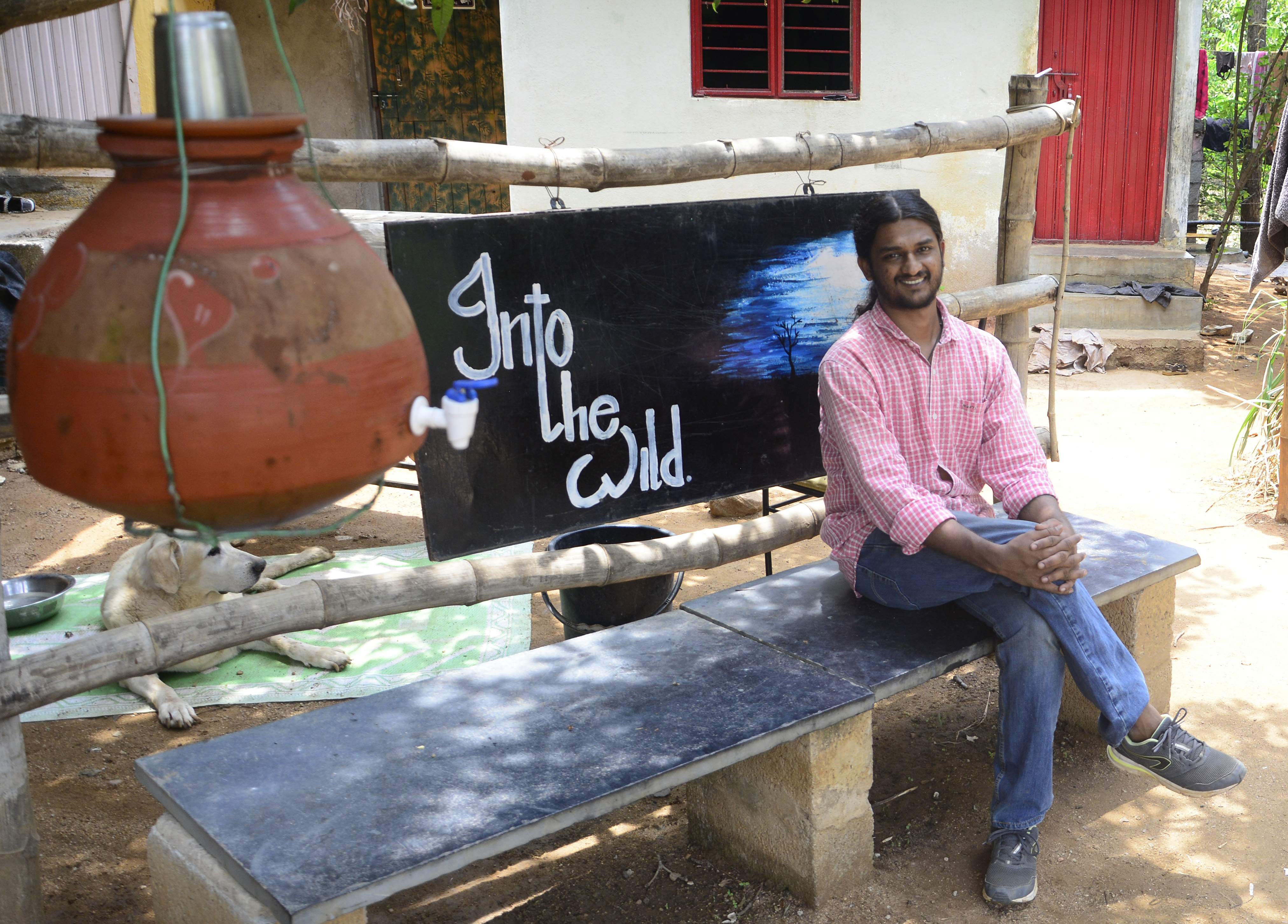 Worth every penny: They charge Rs 400 for each person and take you around the sanctuary for two hours

Till date, they have reached out to over 500 schools and impacted 3,000 kids with regards to this activity. "We have been receiving a good response from the schools. For example, students of Mitra Academy, Greenwood High School and Sri Kumaran Public School have visited Prani several times. After visiting us, these schools have started a nature club for their students so that they can be involved in more environment-related activities. Even kids from playschool visit us because the young ones really don't have any study material on animals or birds."

Their mode of functioning
Sanjeev and his team don't believe in rescuing every animal and filling their sanctuary. Rather, they have a viable mode of rescuing them. They do so if they have sufficient funds. "We have a viable module so that animals can be taken care of and kept happy. Providing quality time and care is our motto. We will rescue animals if we have funds for it and the funds come from the people who visit Prani as we charge Rs 400 from each person. They can spend two hours and we will take them around to explain, touch and feel every animal in our sanctuary. Thus, educating everyone about small and large creatures." Some Emu love: Sanjeev with Emu at his Pet Sanctuary in Bengaluru

When asked about that one animal which is close to Sanjeev's heart, he says, "All animals are really close to me as I have rescued all of them. But recently, one labrador randomly entered the premises of Prani and decided to stay with us. I feel that it is the only animal who adopted me. We call it Doodhla and he is the boss of our sanctuary. We heard from the locals that somebody threw him from a moving car. From then on, he has been staying with us."