A few years ago,  when Chidananda Murthy did not pass his class X exams, he did not know what to do next. Today, he is probably among the handful of people who is working to save our lifeline - rivers.

Incidentally, the Arkavathi river originates in Chikkaballapur village near the Nandi Hills and is one of the tributaries to the mighty river Cauvery. Similarly, the Kumudavathi is a tributary of river Arkavathi. Explaining the bond between Bengaluru and the Arkavathi, he says, "The group is working for the conservation of these two important rivers which have been dying a slow death. Bengaluru shared an important bond with Arkavathi as it was a source of drinking water. In the 1980s, the level of water decreased due to rapid urbanisation, real estate encroachment, sand mining, lack of rain and pollution. From then on, only a small number of farmers use the river water for irrigation. Some farmers sold the land and left for the city in search of jobs." The farmlands became a growing field for thousands of Eucalyptus trees, he laments. Making melody : Chidanand and his team members sing for rivers and trees and they believe that they too enjoy the music

A watchdog for our water bodies
Chidananda was put in charge of conducting meetings with the villagers and creating awareness about this river which is dying a slow death. Mostly due to the illegal dumping of effluents, "In this process, I realised that many industries were dumping untreated water and chemicals into the lakes which would then flow into the Arkavathi river. I took action by writing letters and submitted photographs on how companies were violating the law. But it was not an easy task. I had to visit the Karnataka State Pollution Control Board several times and wait to meet the officials for hours and hours. It requires a lot of patience for anyone. They would agree to come and inspect the industries. But after paying a fine, the industries continued to do the same. So it was a long and an unending process," he explains.

The other danger was that of land-grabbing, "As the river was drying up, people would try to grab the land through illegal means. The same process was followed to stop the encroachment of land by real estate agents. At present, the river doesn't flow continuously as it was earlier.  It flows only when there is heavy rain. But we are trying to save the part of the river that still exists, otherwise, the day when there won't be a drop of water in our villages and Bengaluru is not too far away." 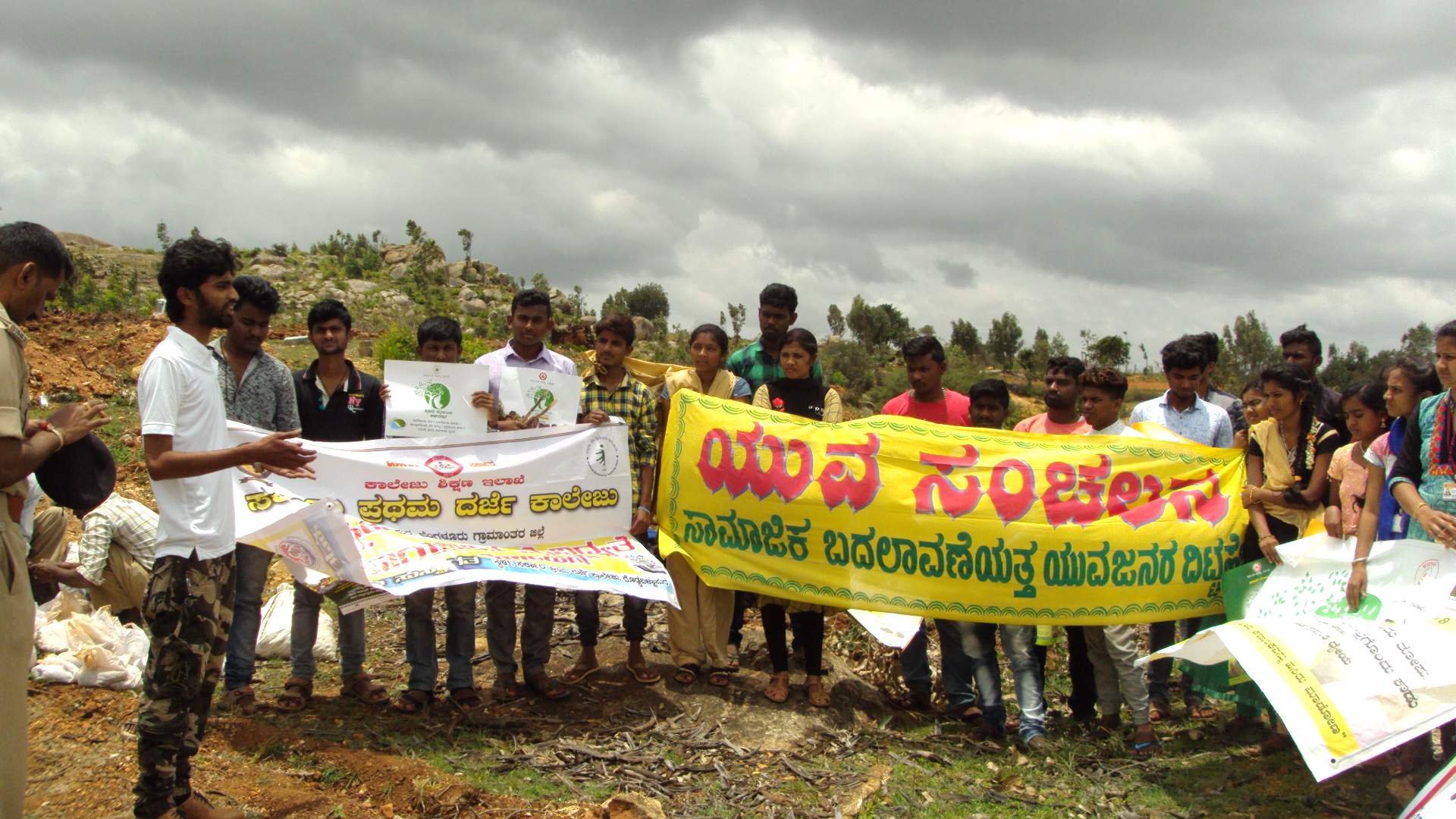 Wise words: Plant a sapling in your compound or home and water it every day

Chidananda also worked with another group called Nagadala that worked for the restoration of a lake called Nagarakere in Doddaballapura. "This is when I developed the habit of reading books in the library. Though I did not undergo formal education, I gained immense knowledge of science and environment when I worked with these groups," says this young man who now has his own group called Yuva Sanchalana. The group has been working for six years and saving the environment is one of their objectives besides counselling youngsters and empowering women. "The unique aspect of our group is it is not funded by any politician or state government or any private organisation. We spend money from our pockets for any work related to the conservation of rivers or afforestation. Since the group is open to everyone, youngsters join the group and work with us for a certain period of time. After getting into colleges or jobs in cities, they leave the group. Hence, every year, there are new members," he adds.

Chidananda, who studied the river during his initial days of activism, understood that the Eucalyptus trees on the farmland required more water than any other plants. At the same time, the Government of Karnataka passed an order to the forest department that they have to chop them down and plant native trees which required less water and grow by themselves. "The forest department got an order to chop the Eucalyptus trees in Kadanooru Kaimara forest in a phased manner. Otherwise, it would lead to deforestation. Therefore my team and I decided to help them out in this process. We started an initiative of plating 30,000 native plants when the Eucalyptus trees were chopped," he explains. 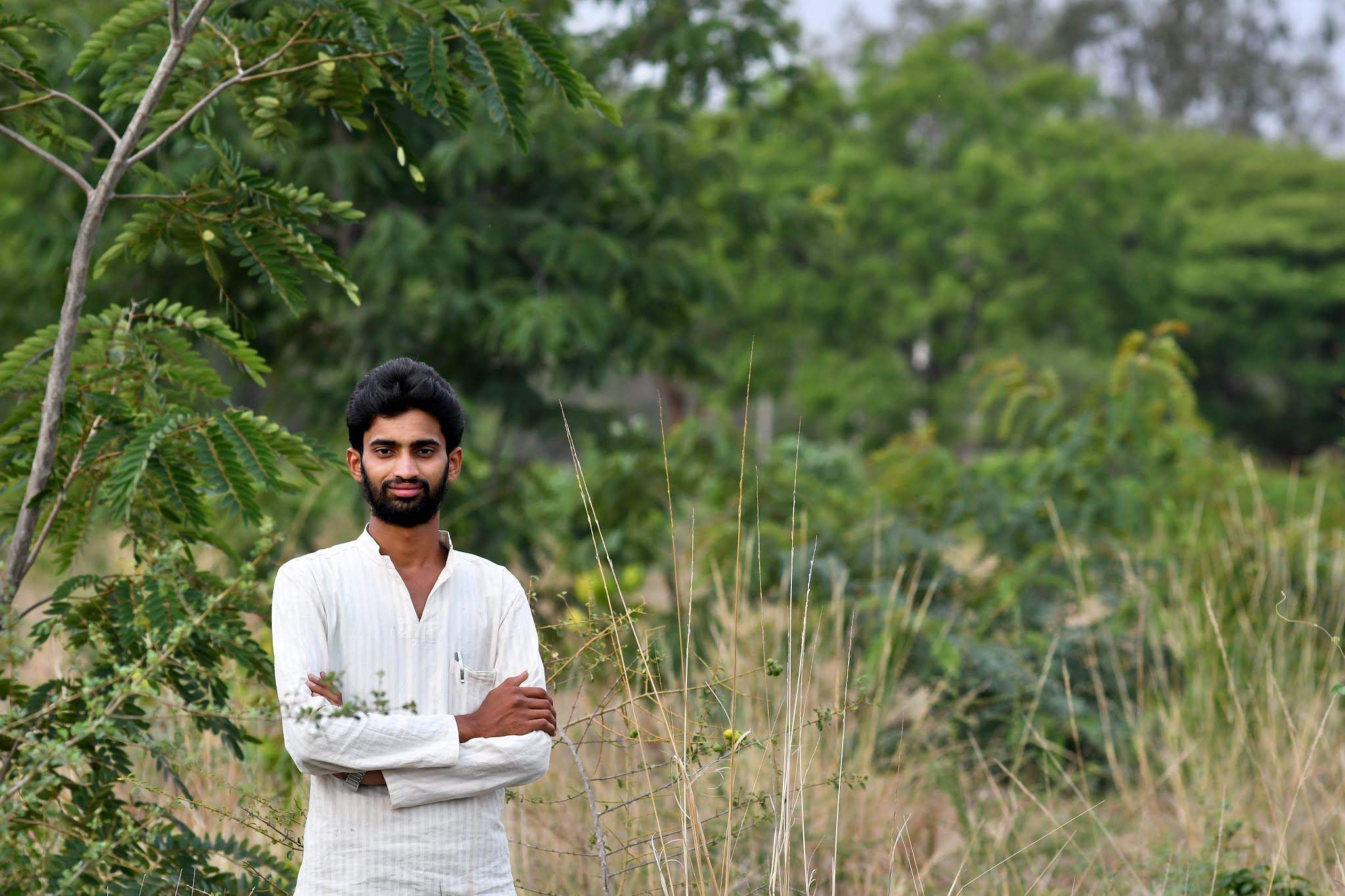 A decade of perseverance: He has worked for Arkavathi water conservation and several environment-related projects for ten years

It was their most ambitious project yet. "There were three methods used in planting these 30,000 trees - Seed sowing, seed ball and direct plantation. While we got a good result in the seed sowing method, the result for seed ball and direct plantation was not as expected. Now, the trees have grown to about four feet and my team is happy. We have grown trees like tamarind, neem, cashew nut tree, trees that can give small cherries to fruits, jackfruit, banyan and much more," he explains.

People living in a particular region have to take care of the trees or rivers. They should not disown them. If river or lakes are being polluted by the industries or encroached upon, then they have to take necessary action and approach officials, protest and bring it to the attention of the media

The team then shifted focus to the cities and towns. They have since planted over 1000 trees across town. "Some people don't have space to plant the saplings in their compound. In such cases, we have planted one or two saplings right in front of their homes. There is a policy on the adoption of trees that we practice. Under this policy, the residents have to voluntarily come forward and adopt the saplings. Similarly, we have planted saplings near the school grounds where school children will adopt one sapling and look after it. Apart from this, we have planted saplings near temples and mosques where the priests will water them on a daily basis," he says happily.

Sensor cuts in the river basin

Currently, Chidananda works full time with the Ashoka Trust For Research In The Ecology and The Environment (ATREE) as a field assistant. Chidananda narrates, "As a part of their research project, ATREE has installed several sensors in different corners of the river. There are work stations set up very close to these rivers. These sensors provide details about the level of water during rain and summer, pollution level, water consumed by different crops in the farmland etc. Based on the data I capture, they give a prediction on how much water has to be used or conserved." These research reports are presented in various national and international conferences to tell them the importance of rivers and the solution to save them.

According to Chidananda, Sand mafia is the biggest threat to rivers like Arkavathi or Cauvery. With the intensive mining of sand in rivers, it leads to the death of aquatic animals and water bodies. The rivers will sink and go dry. Sand is the main element in storing huge amount of water

Apart from this, he also goes door to door collecting the data and measuring the level of water in the borewells in different farmlands. "This helps us to predict the usage of water and the number of years it can be used.  We tell farmers about the necessary steps they can take on their farm. Usually, we suggest rotation of crops or growing millets during summer that need less water compared to other crops like paddy or wheat," he adds.

Like most jobs, even his is a 24x7 calling. He says, "Whether it is raining heavily or scorching hot, I see that I go to the field to capture the data. Sometimes, when it rains, we need to wait in the work station to measure the amount of rain, capture it in the system before we leave - and that can sometimes take till midnight. Snakes pose another challenge to us. Since water and forests are a natural habitat to them, they enter the sensors and settle there. I need to wait for them to move or sometimes, I have to bring them out and leave them in forest areas. Most of the times, it is scary but it is all part of the job," he says.