Frames and the flame within: How Ramnath Chandrasekhar is making children commune with nature again

K Ramnath Chandrasekhar's journey with nature began quite young when he was 7 or 8 years old. Growing up in rural Pudukottai in the state of Tamil Nadu, his home was surrounded by scrub jungles and lots of ponds. Most of his time post-school was spent in going out and exploring these places. He would go to the ponds, collect frog eggs, put it in a tub and wait for them to turn into tadpoles. That's how his curiosity towards nature began. When he was thirteen, his father gifted him a camera and soon he was obsessed with capturing the raw beauty of nature. The Periyar Tiger Reserve, a three to four-hour drive from his hometown became his favourite spot. Slowly, he started expanding his portfolio giving him the opportunity to meet and work with Shekar Dattatri, the renowned wildlife filmmaker while he was still in secondary school. That's when things took a more serious turn.

While working with Shekar, he decided that he didn't want to be just a photographer or filmmaker. "I had a broader purpose in mind," says the 30-year-old, and adds, "Around 2009, I used to take his films and go show it in schools and so I was exposed to the status of environmental education in schools. It was bad. I realised that just going to schools once in a while was not enough. I started doing longer programmes. But even that wasn't enough. I realised that we needed more hands-on learning approaches. That's why I decided to be a nature educator. I see a big need for that in every school and every community." 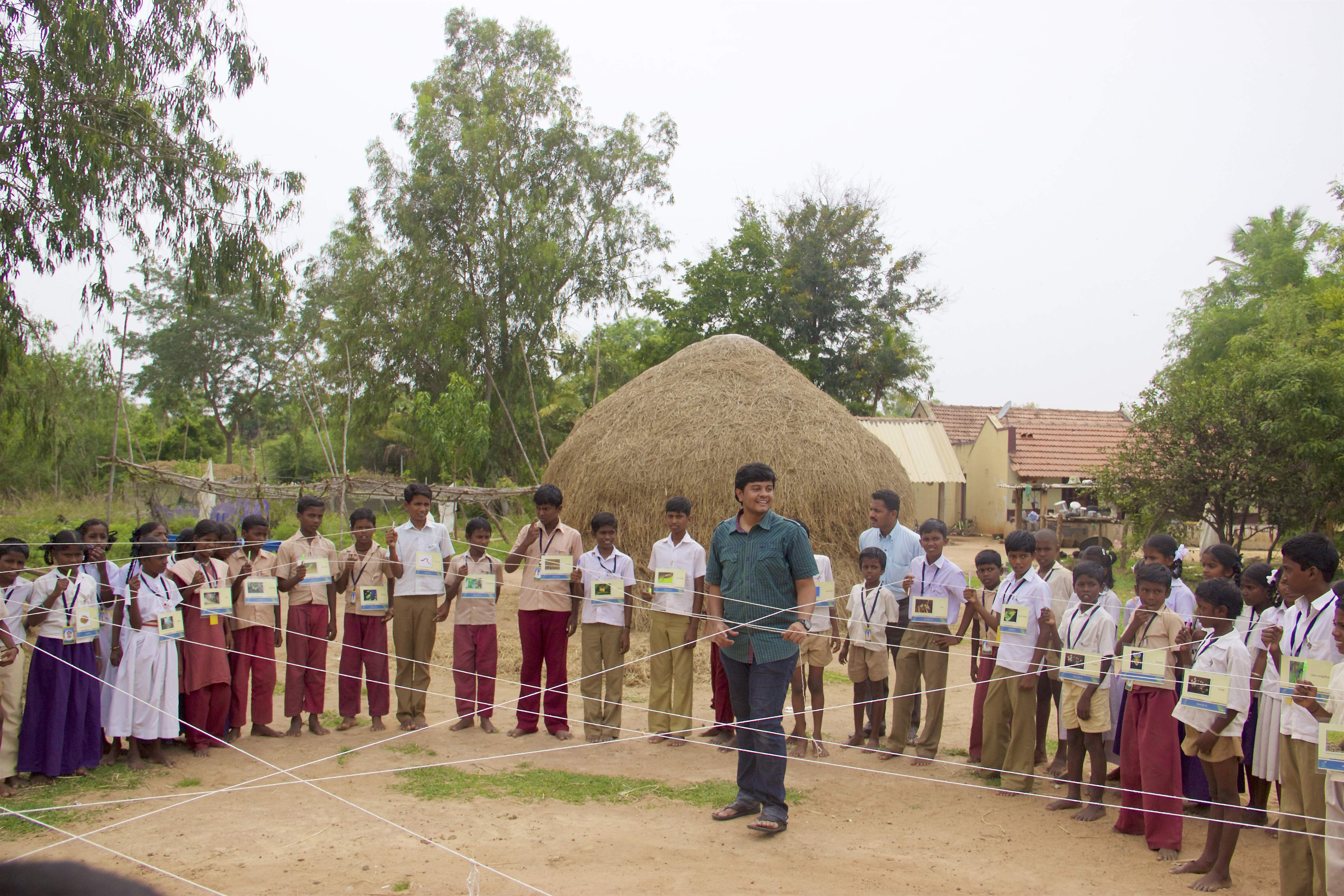 Nature school: Ramnath engages students in a fun activity at a school.

He believes that exposure to nature is what it takes to develop responsibility. "When we're in school, there's very little exposure we have to the natural world. Our connect with nature depends on how much we're exposed to it. Any environmentalist or even someone who's just doing composting at home was probably given a platform to understand environmental issues that further led to a positive contribution. So when children are exposed to nature, not as information, but as an insight, in a more enticing manner, they'll grow up to be more connected to nature and contribute to its conservation. If we had just one person in every community, children would be much more interested in demonstrating environmental conscious action."

Primarily, the biggest challenge according to Ramnath, is to create a space for children to learn about nature. "We need to reimagine how nature and conservation are taught in schools. The resources are already there, but it needs to be accelerated and adapted," he says  Some of the curricula developed by his team include 'The Planet and You', a six-month curriculum designed with nature and conservation documentaries, along with related games for the children. The other curriculum that he co-developed is called 'Kartavyam' or dutiful citizen. It's about helping every child become a problem solver. Children find environmental issues around their hometown and go through a six-month journey finding solutions, and in the end, they write a book on their experience.

What's in store: One of the curricula developed by Ramnath is 'The Planet and You' which includes nature and conservation documentaries and games

Ramnath has also worked on outreach programmes with over 50,000 students and 250 schools across Tamil Nadu. Most of the schools are in smaller towns and villages where exposure to ecological literacy is limited. He has also worked as part of Shekar Dattatri's documentary team and mentored over 45 children to write and publish story books as part of the Kartavyam programme.

What was encouraging for Ramnath was when few of the students came back as applicants for the Nature Educator programme, which is basically a programme to create opportunities for young people to pursue environmental education as a vocation. "We help them create nature clubs in schools and through that process, find pathways to pursue careers in conservation and explore various volunteering opportunities," he says.

We don't give them a pre-developed curriculum. While we discuss with them, we find out their motivation and help them develop their own curriculum.  For example, there was a girl in Kolkata who was motivated to conserve wildlife in and around Kolkata. We helped her conduct programs around her interest in her own school and in other schools and connected her with The Urban fishing cat Project. She now volunteers with them​

Ramnath's contributions to preserving the environment are many. But as he'd like to call it, it was merely his duty to participate in protecting what is given to us. Ramnath's efforts include a coffee-table book that he co-authored called Ganga - More than a River. Last year, he also did a backpacking tour across five countries in Asia to visit schools and colleges in various communities to find out what the challenges and opportunities to improve eco-literacy in schools were. "The idea is that eco-literacy is as important as literacy in today's day and age," he concludes.