From the way K T Rama Rao dresses to the way he addresses a crowd, he has a certain resonance, especially with the youth, something that many politicians always aspire for but seldom attain

Suave, charming and quick-witted — these synonyms are not known to be traditionally associated with politicians, but Kalvakuntla Taraka Rama Rao — fondly known as KTR — is an exception. Truly, there is nothing conventional about this man, except that he hails from a political background and his father is the Chief Minister of Telangana, Kalvakuntla Chandrashekar Rao (better known as KCR). From the way he dresses to the way he addresses a crowd, he has a certain resonance, especially with the youth, something that many politicians always aspire for but seldom attain.

Fun on the go

KTR literally wears many hats in terms of handling various state cabinets like Information Technology (IT), Municipal Administration and Urban Development (MAUD) and Textiles and NRI Affairs. Despite this, the Karimnagar-born politician is an active citizen of the Twitterverse. In fact, his Twitter feed is as diverse as the man himself. He not only tweets about policies, the various places he's inaugurated and addresses grievances, but he occasionally shares philosophical quotes — wisdom — in the form of Calvin and Hobbes comic strips and even retweets selfies his fans tag him in. Tells you so much about the man, doesn’t it? He brought the same good humour to The New Indian Express Edex 40 Under 40 Start-up Summit held at Vivanta by Taj Begumpet, Hyderabad, on June 9, 2018, as well. He had the crowd hooked with the good-natured jabs he took at Bengaluru, Delhi, Chennai and other cities while outlining what Telangana is doing to enable entrepreneurship.

Wearing a shirt, trousers and comfy mojaris, the ensemble we have come to associate him with as opposed to the stark white kurtas that are donned by politicians, KTR took to the podium amidst a round of resounding applause. He cut short his own introduction in the interest of time and plunged right into the start-up talk. He harked back to the days when Telangana was yet to become a state and how employment was one of the strongest reasons why people wanted a separate state and yet, “For everyone from Telangana’s Chief Minister KCR garu to President of the USA Donald Trump — creating new jobs is a challenge,” said the 41-year-old.

Quoting John Thomas Chambers, former CEO of Cisco Systems, who visited Hyderabad for the Global Entrepreneurship Summit (GES) conducted recently, KTR revealed how the major chunk of employment is no longer going to come from Fortune 500 companies or the Forbes 40 or other such lists. “The next decade is going to belong to youngsters, to start-ups,” he said. Speaking about the role of the government in encouraging the start-up wave, KTR said, “Governments, at best, can be enablers and foster an entrepreneurial environment that helps start-ups innovate, incubate and incorporate. We cannot create a wave of employment or innovation per se,” he pointed out. 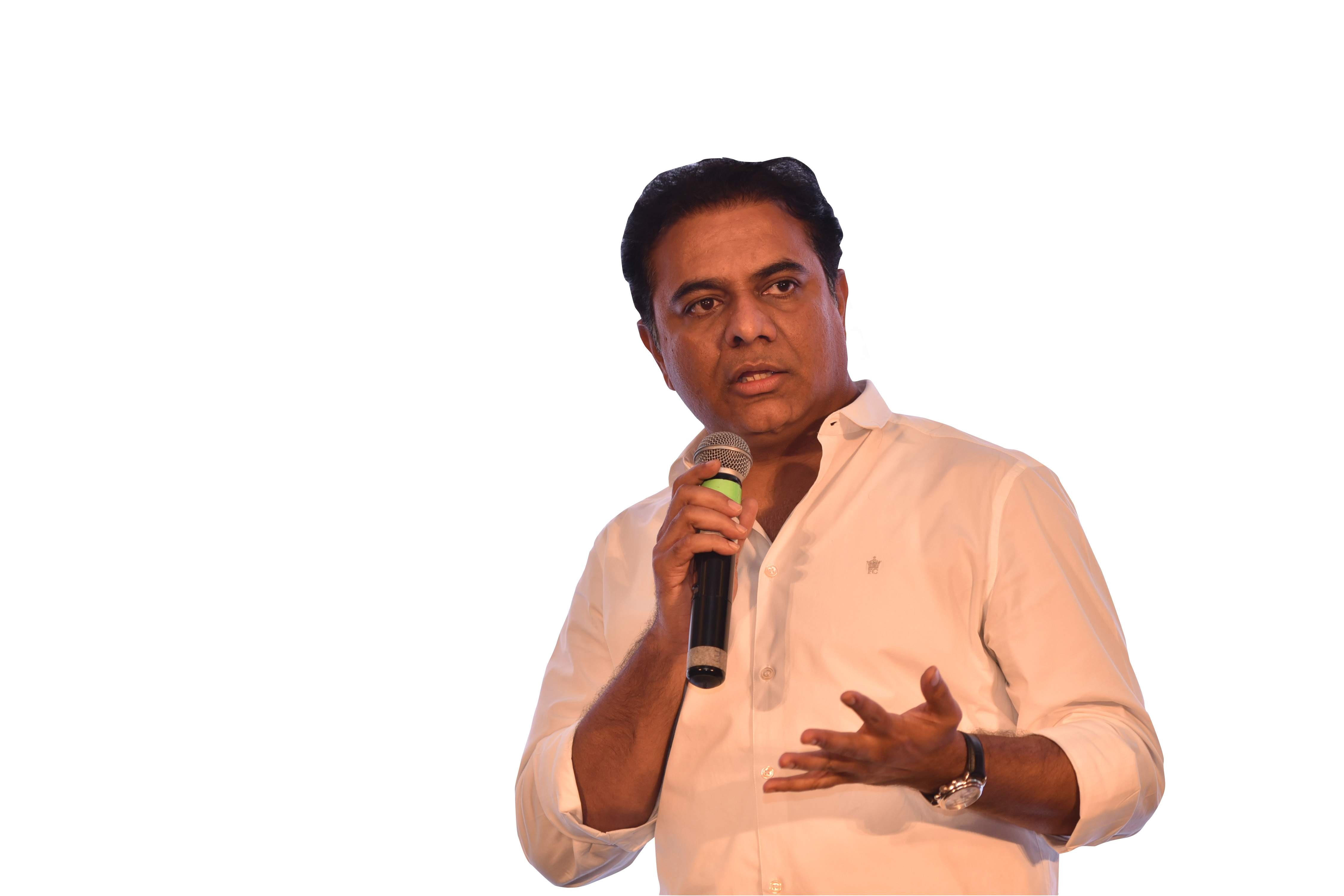 The next decade is going to belong to youngsters, to start-ups

Telangana is doing the best they can to create the right climate for start-ups, added the state cabinet minister. While the 70,000 square feet start-up ecosystem T-Hub is already in place, their second phase, which is expected to come up in a year and a half, he informed. While it looks like Hyderabad is the centre of their attention, KTR informed that they haven't forgotten Tier II and Tier III cities. “We will be taking innovation to them through sandboxes and the various other initiatives that we have launched,” he concluded and proceeded to a session of #AskKTR.

For the next half an hour, KTR fielded questions of various kinds. While the grievances or inquiries were promptly directed towards Dileep Konatham, Director, Digital Media, by KTR, other questions were answered with wit and charm. Excerpts:

Are there any plans to welcome back the distressed from US, Dubai and other places?

One shouldn't come back in distress, one should come back looking forward to the future. For anyone who is looking for a challenging opportunity, there is no better place than India. The time is right for young Indians to come back, take a little risk if need be, use this as a launchpad and take part in nation-building through their initiatives.

Is it true that women in tech are not taken seriously? Do they face more roadblocks than others?

During the Global Entrepreneurship Summit conducted in Hyderabad, we had announced a Women's Entrepreneurship Hub and as promised, we started it on March 8, which is International Women's Day. They have already received about 300 applications and I do believe that some strong enterprises will be coming out of it.

I'm trying to do something for transgenders and as it is, the support from the government is less. Who can I reach out to from your government?

If you have a very specific proposal, we will be your first customer. If you're looking to do something to improve amenities for transgenders in the city or anything along those lines, please get in touch with Dileep.

Thanks for taking the time to talk about start-ups with us because we clearly are not your vote bank as we won't be standing under the sun to vote. But apart from start-ups, we request you to focus on education as well.

This is one of our challenges. We are extremely casual, nonchalant and indifferent to exercising our right to vote, especially the urban, educated people. At the end of the day, it's not about the people who show up, it's about the people who don't. And though this is a democracy and you can chose to go on a holiday instead of voting, but my request to you is that you need to vote! Whether you like me or don't, you vote for me or against me ­— doesn't matter, but you need to vote! Talking about the focus on education, point noted.