This nine-year-old from Bengaluru created an app that can help us segregate our waste. Check it out

Sean Solano Paul's app, Trash Sorter, can turn learning about waste segregation into a fun activity and help you sort your trash correctly. He is currently building the second version of this app

Whenever nine-year-old Sean Solano Paul saw large amounts of trash piled up in front of his school compound and conservancy workers picking it up, he felt bad. He would question why these workers had to pick up others' trash to sort it when people could just put their own trash in the proper dustbins. Bearing witness to this regularly, he decided to create awareness about segregating waste into two categories — biodegradable and non-biodegradable. And while holding up placards and passing out fliers might have been more than enough for this kid to do, Sean wanted to do more. He decided to create an app instead.

Explaining how a kid could create an app, this student of National Centre for Excellence, Bengaluru, says, "Six months ago, my parents enrolled me in WhiteHat Jr (a kids coding platform) so that I could learn to code. Initially, I took up only 48 classes and each class was an hour long. The more I learnt to code, the more I liked it. I learnt how to create different games, website and so on. I wanted to use coding for a greater good. That's why I developed an app called Trash Sorter with the help of my teacher at WhiteHat Jr. I have extended it to 144 classes now." 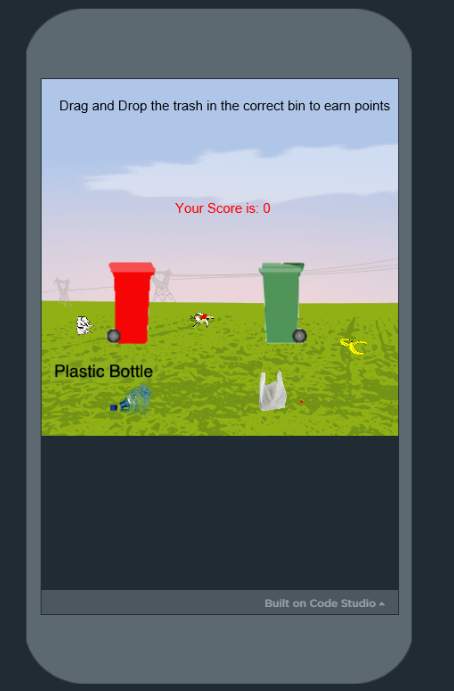 An image of Trash Sorter 1.0 that can help people segregate waste

Sean launched the first version of the app — Trash Sorter 1.0 — a week ago. One can download this game simulation app from Google Play Store and learn to sort waste into the two different categories. While the green dustbin is meant for wet waste, like the skin of vegetables, waste food and rotten fruits, the red dustbin is meant for dry waste, like chocolate wrappers and plastic bottles. Sean explains, "This version of the app is based on gaining points. If you put the trash item in the right bin, then you earn 1 point. However, if you put the item in the wrong bin, then you lose a point. This is to make learning waste segregation a fun activity rather than a boring one. People can download and learn to segregate their waste with the help of this app before they give it to conservancy workers."

Sean and his teacher are now working to develop the next version of the app — Trash Sorter 2.0. This version will be a little different. Here, people don't earn points, instead, they will be made to understand why a particular item must be disposed in the red dustbin or in the green dustbin. "I am yet to launch this version as it is still in the development stage. We are adding a few more features to it," he concludes.