Never thought I could withstand this: How joining the NCC turned this MOP student's life around

Rakshana joined the NCC to lose weight but soon became the best cadet in India and won an award from the Prime Minister of India, Narendra Modi. This is her story

Most college students spend all their time studying for exams and hanging out with their friends. But that wasn't the case for Rakshana Suresh Prabhu. This MOP Vaishnav College for Women student's entire college experience revolved around the National Cadet Corps (NCC). She dedicated her every waking moment to the NCC and proved herself to be the best cadet in India, out of the 17 directorates. As a reward for all her hard work, Prime Minister Narendra Modi presented her with the All India Best Cadet Award at the Republic Day Parade in 2019. We had the opportunity to sit with her and have a conversation to learn a little more about Rakshana as a person. This is what we found out.

Why did you decide to join NCC?

I joined NCC to lose weight because in my first year of college I was really obese. Many of my classmates joined because they wanted to attend camps. After a while, they all quit but I continued and I got to attend 11 camps in total.

What is the one thing that has surprised you about yourself from your three years in NCC?

When you’re a part of NCC and you go to these camps, you get to know who you are. I had to wake up early morning at four every day and start working out. In Delhi, the temperature was extreme. It felt like my blood froze every time I left the dorm and we had to walk a kilometre to reach the restroom. Also, I’m not an athlete and I had to compete against athletes, and I managed to win. I never thought I could withstand all this and that is one thing that surprised me about myself.

What motivated you to keep pushing yourself through this journey?

I've always been a competitive person but I pushed myself because when I left for Delhi, so many army staff had come to send me off. They told me that everything was in my hands and that they were all counting on me to win the award and make our state proud. I could feel the pressure but I had to do it for everyone who had to stay back to let me go. I was carrying everyone’s dream with me and I knew if I lost, I would let all of them down.

What are some of your most memorable moments from NCC?

Two things stand out for me in my experience with NCC. We have the Ragda where we are made to do duck walks, crawl and other embarrassing things. Initially, it was hard but I began to really enjoy it soon. We are also not allowed to eat ice cream because we can easily fall sick. I love ice cream so without my seniors’ knowledge, I went to KNK Road for ice cream with my friends. There I ran into my senior and I was made to do pushups in the middle of KNK Road. That is one memory I will never forget.

Rakshana with her bow

How supportive has your college been throughout your journey?

When we go to these camps, we can’t attend college. I couldn’t attend my third-semester exams. But my college was nice enough to let me retake them without them becoming arrears. Also, they had put up a huge banner for me when I returned from my final camp and they were so supportive.

What was the hardest part about going for these camps?

When I was at camp, I could not meet my family. It was very difficult to talk to them as well because there was no signal anywhere to make calls. But winning the All India Best Cadet Award from our Prime Minister was worth all the struggle I went through.

When you joined NCC, did you ever think you would win an award from the Prime Minister?

In my first year of NCC, I wasn't very involved and I never even thought about being the best cadet in India. Once I started going for these camps, I was still simply the reserve cadet, meaning it wasn't certain that I would be the cadet to go to Delhi. But I kept hoping that maybe one day I could be the main cadet and I pushed myself. Finally, I was chosen as the Best Cadet and I won the award from our Prime Minister. That is one day I will never forget. 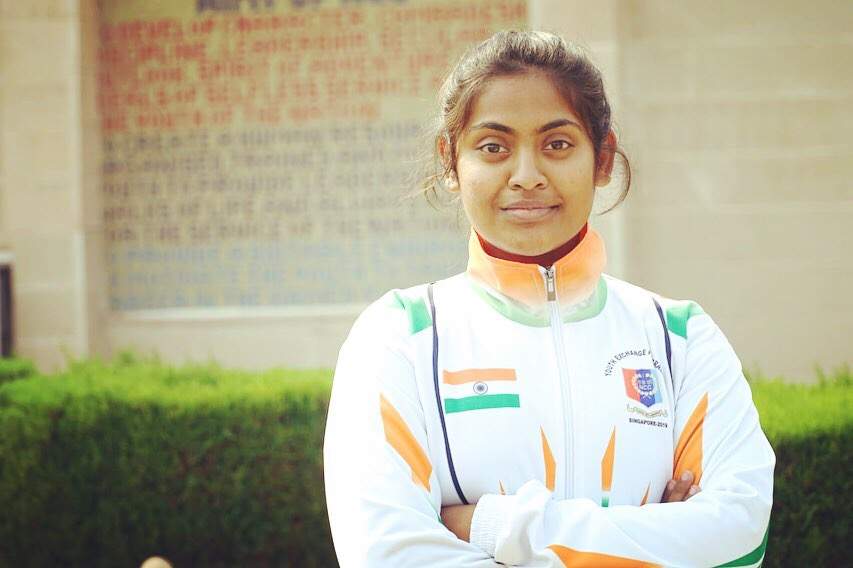 Would you say college is easier than NCC as NCC is generally known for its strenuous training?

Do you have any advice for students who might want to join NCC in the future?

When you’re a part of NCC, it’s very hard to focus on college and education. So if that’s important to you, you probably shouldn’t join NCC. NCC is your priority and you have to give it your hundred per cent.

What are some of your goals for the future?

I’ve always wanted to be an IAS officer but since I got this award, everyone thinks I should join the army. But I don’t think I should change my lifelong ambition just because I won an award.