Artist Annada N Menon's art is up for sale as part of her lockdown fundraiser 2x4 feet. Check it out

They say you can’t help everyone. But visual artist Annada N Menon still wants to give it her best shot. With her fundraising campaign 2x4 feet, she hopes to raise funds for three causes while the country is in lockdown: feeding the disadvantaged, feeding stray animals and helping abuse victims. With this personal project, she hopes to help animals and humans alike through online collaborations with other artists like workshops and offline collaborations like stalls.

To start with, Annada has borrowed from her own collection. In 2018, she created 31 illustrations during the Inktober Challenge which comprised of tribal masks. If you choose to donate, you will receive an unmounted original hand-drawn postcard from the series, a set of stickers and a colouring page which is also mask themed. Annada says, “Since it’s highly unlikely to send and receive the physical postcards at this time, I’ve added a colouring page. People will receive the digital version via email as soon as they make the purchase.”

And since everyone is on a shoestring budget these days, the fundraiser is not on a strict timeline. For now, the priority is to raise enough money for food. And due to the urgency, Annada does not plan on raising a lump sum, but will transfer the money on a sale-to-sale basis. Over 10 small NGOs and social workers, 5 for humans and 5 for animals, will receive the proceeds. With an aim of raising 62,000 rupees and a donation of 6,200 per cause, each postcard will need a contribution of Rupees 200. 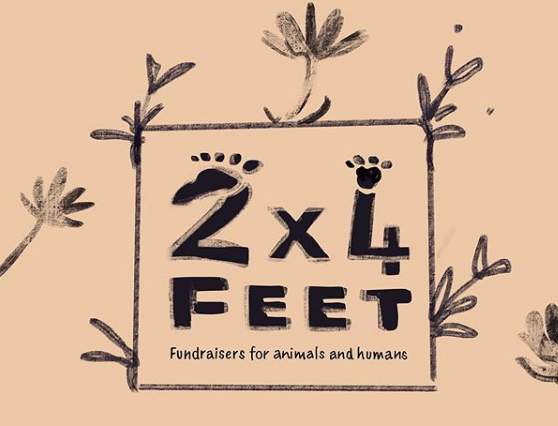 DRAWN OUT: Those who donate will receive hand-painted masks

“This is something I’ve been planning since last year,” says Annada. “The whole plan started when I created the masks and I did not want the monetary benefits because I had used references. So I wanted to donate this to a cause. One of the NGOs I’m working with, the Aks Foundation help out sexually abused children and women. The initial plan was to donate it towards that cause alone.”

Soon enough, the artist found a series of benefactors who she wanted to support. She says, “I was trying to reach smaller groups and individuals who actually needed the funds, not NGOs that are doing really well and getting constant funding. It’s smaller groups and people who are doing good the best work. One of the organisations educate children in smaller schools about what abuse is and about good touch and bad touch.”

Annada finalised the name of the project just one day before the lockdown was announced. She realised that it was the best time to roll it out. The hope is to make at least one third of the amount she has promised so she can begin supporting one of the causes. Soon, she plans to open a proper online store and shift her work there.