A typical day for Anandi revolves around jibes and insults from fellow auto drivers, but that does not stop her from doing her trade. She dreams of the day women will be at par with men

On any given day, pending assignments, a cranky boss and extra hours are enough to make most of us say we had a bad workday. Given that logic, for Anandi, the only female auto driver in Erode, who gets jibes and insults from fellow auto drivers for merely doing her job, every day should be tagged a bad workday. But the mother-of-two likes to look at the bright side of things. “Bad days were when my family was starving and I had no money to feed them. But today, I have the money to quell their hunger because of the money I get from riding the auto-rickshaw. So every day is a good day,” she says, smiling.

Anandi is positive today, but things were drastically different last year when she was almost on the verge of suicide because of the economic crisis that her family was going through. “My husband is an ambulance driver who does not get regular work. When he gets a call, albeit rarely, he goes and earns money.  So last year we ran out of money and were struggling to put food on the table. That’s when I decided to die. Just as I was going to ingest some chalk powder (as she did not know what poison would kill her),  one of my daughters came asking for food. That’s when I had a change of mind and decided to fight against all odds,” says Anandi who is a mother to two daughters – one in class 9 and the other in class 10.

Despite having a disability (one leg shorter than the other), Anandi decided to learn something new to earn a living and that’s when her husband Amit Raja taught her to ride the auto. She aced the same in just one month’s time. Surprisingly, friends and relatives were supportive of her decision to take up this non-traditional profession. “I bought an auto on a bank loan and decided to make my living by being an auto driver. But the first day, when I went to the Perundurai Road auto stand, the other auto drivers did not allow me to park my auto there. They told me that I had to shell out Rs 50,000 to 1,00,000 for a place in the stand,” recalls Anandi, who adds that they were not very welcoming of her because of the simple fact that ‘she was a woman who was somewhere that she was not supposed to be’. 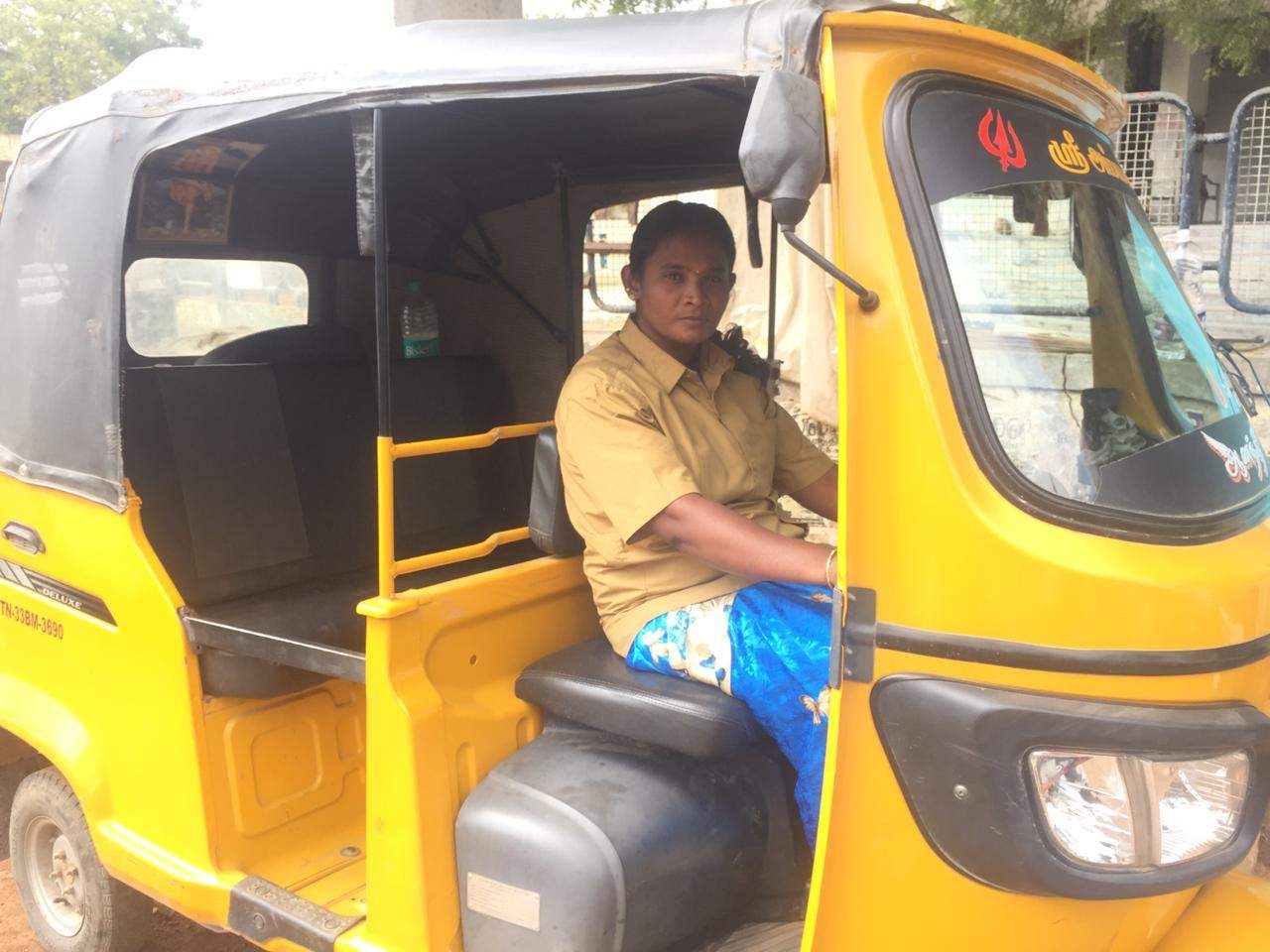 Anandi's only aim in life is to provide for her family

But all this did not rattle Anandi. As she could not afford to pay such a huge sum, she decided to park her auto in a public space, nowhere near proper auto stands. She even resorted to innovative marketing methods – like distributing visiting cards containing all information about her so that people would come to know about her. And they worked. “The rides that I get are mostly through phone calls. I get one or two calls every day. This is how I am able to buy groceries and school supplies for my children,” she explains.

Slowly more and more people came to know about her, and today Anandi akka is popular in all of Erode. But her popularity did not sit well with many people in society, especially other auto drivers. “Some people shoo me away because it is so easy to disrespect a woman. But others call me akka and shower me with love and affection. Therefore, I ignore the bad things and pay attention to only the good,” she smiles.

Many women have also been approaching Anandi, asking her to teach them how to ride the auto. And she happily obliges. “This (auto riding) has ended my hunger, so why shouldn’t it do the same for another woman? I will teach women for free and when there are five or more of us, I will campaign for a separate auto stand for women as well. Women are not lesser than men. I dream of the day we can walk and work with our head held high,” she says with conviction.