Taranauts' author Roopa Rai tells us why everyone must read the Gita,Vedas and Upanishads

Roopa Pai, a popular children's author tells about her work and her upcoming book on modern medicine

This year, Roopa Pai's fantasy adventure series titled Taranauts will turn 10 years old. The book series is still finding new fans, many of whom were not even  born when the first book was written. Roopa, who grew famous after the launch of this series has written several other books for children. From breaking the complexities in Gita, Vedas and Upanishads to simplifying economics, Roopa has explored writing in every possible genre.

The famous children's writer who is based out of Bengaluru studied engineering, but immediately took a big detour with writing for children as a full-time  job. She says, "I decided to be a children's writer when I was only 13 years old. I had only written smaller picture books for children until I wrote Taranauts. So it's very special. It's a series of fast-paced adventure books with a good plot and fun dialogues. It involves a lot of science and has plenty  of word and number puzzles. Although the series is set in a fictional universe called Mithya, there is a lot about India, Indian languages, mythology, society, and philosophy as well."

Roopa firmly believes that it is important for everyone, including children to, should know be familiar with the values, ideas and philosophy in the ancient texts of their own cultures, because it is one way for them to know and understand themselves. Roopa herself did not have more than a passing familiarity with the Bhagavad Gita, Vedas and Upanishads until she started researching to write her own books for children. She says, "There are very few cultures or geographies closely connected with their ancient texts and India is one among them. The values, ideas and philosophy of these texts are alive in our daily lives.  Unfortunately, our ancient texts are not very accessible to children. Even though there is nothing religious about them – in fact, even the existence of an  'all-knowing God' is questioned in the Rig Veda, these. These  texts have been placed on a religious pedestal and their shlokas mostly confined to religious ceremonies. The Vedas and Upanishads In addition, these are also very mystical texts, written in an ancient language, which makes them very intimidating to all of us. To top it all, Some there are people believe who talk down that these  ancient Indian texts saying that they are patriarchal, casteist or sexist, which makes others wonder if they should really be reading them  thereby making people averse to it." 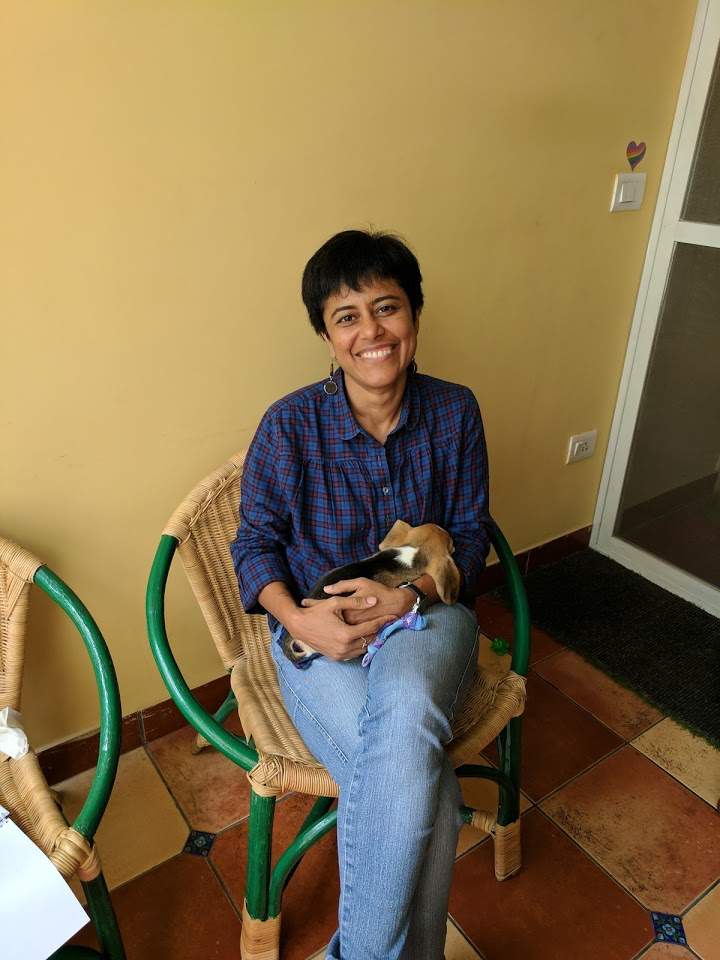 Walk in the city: Roopa  spends her leisure time conducting heritage walks for people in and around Bengaluru

In contrast, Roopa found that there was nothing ‘religious’ about the Gita, the Vedas and the Upanishads. To her, they were to be great works of philosophy and  literature,  wonderful self-help books,  perhaps the oldest in the world. Currently, she is working on 25 powerful ideas that made modern medicine. The book travels through 2,500 years of history and explores how ideas of what is wellness and what is illness has changed over the millennia. the most basic questions like what is wellness or illness For instance, 'What makes does it mean when we say that a person is whole and healthy?' It lists out 25 ideas that seemed revolutionary back in the day, but may or may not be relevant today. "Some of them have stayed unchallenged through the years, some have disappeared altogether, and some fell out of  favour before finding resurgence. My research involved reading a lot of books – mostly, as you may expect, non-fiction, but some of them fiction, set against actual historical backdrops about doctors and scientists and medicine. But, the largest chunk of research was conducted on the internet. The book is tentatively titled ‘From Leeches to Slug-Glue' and is expected to hit the stands this September," explains Roopa.

For Roopa, the most fascinating thing about modern medicine is how recently it came into being. She says, "Until some 150 years ago, no one in the world knew that germs caused diseases. No one knew that a mammalian sperm had to fuse with a mammalian egg for new life to begin – they believed it was the sperm alone that created life, and that the mother’s womb was only the ‘soil’ which nourished the seed. What remarkable progress we’ve made since then. I wanted to celebrate  this young science, to remind people of all those men and women who toiled to create the safe world we inhabit today." Fan fame: Children wait in queue to take autograph from Roopa in one of her books

Apart from this, Roopa is also working on translating Kannada poetry into English. The book includes 100 poems written by the celebrated poet Padma Shri K S   Nissar Ahmed. "It is wonderful, challenging and very satisfying work. He is a beautiful and brutal poet with an astounding range of concerns, and I hope my   translations can do justice to his work," she concludes.